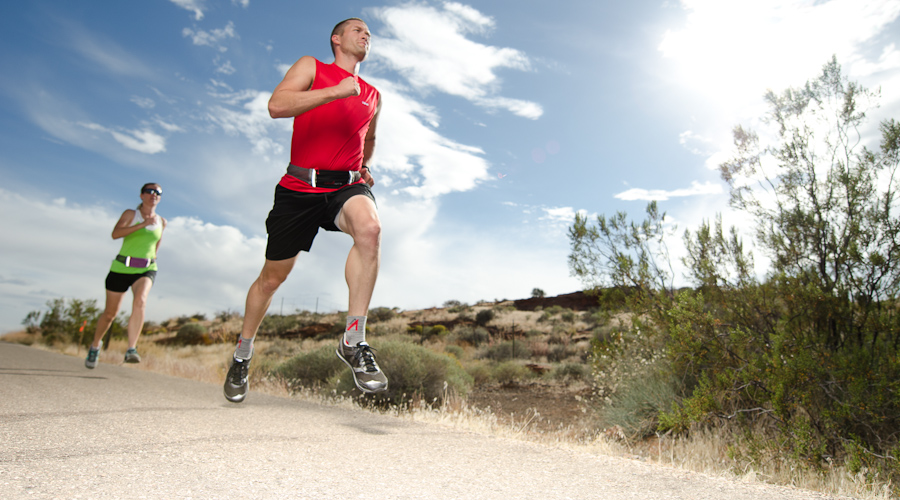 At the Summer 2012 Outdoor Retailer show in Salt Lake City, UltrAspire gave us a sneak peak at an up and coming product – the Quantum – a race inspired waist belt you slip on like shorts, that gives you enough storage for the essentials without the usual hassles of a running belt. I remember liking it enough at the time to want to try and talk them into parting with one of their few demos, but left empty handed yet excited for its upcoming release.

Once Trail and Ultrarunning was able to get our hands on the Quantum, we quickly put them right to work. I immediately tried mine out on a 3 hour run. I filled it with a gel flask, some salt pills, wipes, my phone and keys, along with a couple of extra gels just to load it up. Slipped it on, grabbed a water bottle, and headed out. The real shock came to me about 45 minutes into my run when I realized I hadn’t been paying any attention at all to the Quantum…it was just there, doing it’s job, without the constant waist-strangling reminder employed by so many other belts out there.

For Craig, it was the sleek design of the Quantum that first caught his eye. “I’d been looking around the market for a waist belt that offered the ability to carry a phone plus gels, but not the need to carry water. When I saw the Quantum I knew immediately that this was the belt I was looking for. Additionally, the fact that it had no buckles or significant loose ends I was hooked. The Quantum weighs next to nothing, even fully loaded (it can carry two gel flasks or up to six individual gel packets, plus a cell phone up front)”. He too commented on how quickly he forgot that he even had it on. “I never felt it bounce, even when bombing technical downhills and unlike many other belts it never rode up higher on my waist.”

Craig also gives some good advice on the fit: “I love how the Quantum fits. I would recommend to anyone looking to purchase the belt that they size toward the smaller size. If you feel like you are on the lower end of the fit spectrum, go down a size. I have a 31 waist and found that I was much more comfortable wearing a Small over a Medium.”

Functionality boils down to this: there are no buckles, gels go in and out easy, the cell phone pouch has a water resistant inner liner, you can spin the whole belt on the fly to get at the back pockets easier, if needed, and even on longer runs (up to 20 miles) you can carry pretty much everything you need (except water, this pairs great with a handheld). A personal recommendation: “Carry your gels in the belt and use the pocket in your handheld water bottle (if it has one) for your garbage. Makes it much easier to stow and dump garbage at aid stops.”

After a year and thousands of miles running with this belt, it has become a constant companion. Even for shorter runs it keeps my phone, key, and a ‘just in case’ gel (and wipes!) all within reach. It does have some hidden clips for a race number, and I can see the convenience of having your race number on a belt – especially in races where you may be constantly changing clothes and other gear – this keeps all the necessities close at hand regardless of gear changes.The only other thing I would add to make this belt absolutely perfect would be UltrAspire pill pocket – currently I just stuff them in one of the back pouches under a gel.

Simply put – “This is, hands down, the best belt I’ve ever used.”

Whether running a half marathon, Iron-man or trail race/ultra, this belt can serve your needs. Since you can put as little as you want in it or load it full, it is always comfortable and easy to wear. I would even consider this a “must have” piece of gear for every runners bag.

For a limited time, visit the Trail and Ultra Running store to pick up your UltrAspire Quantum and get a Free Retro Isometric Pocket Handheld free!