3 Essential Form Tips – From the Waist Up 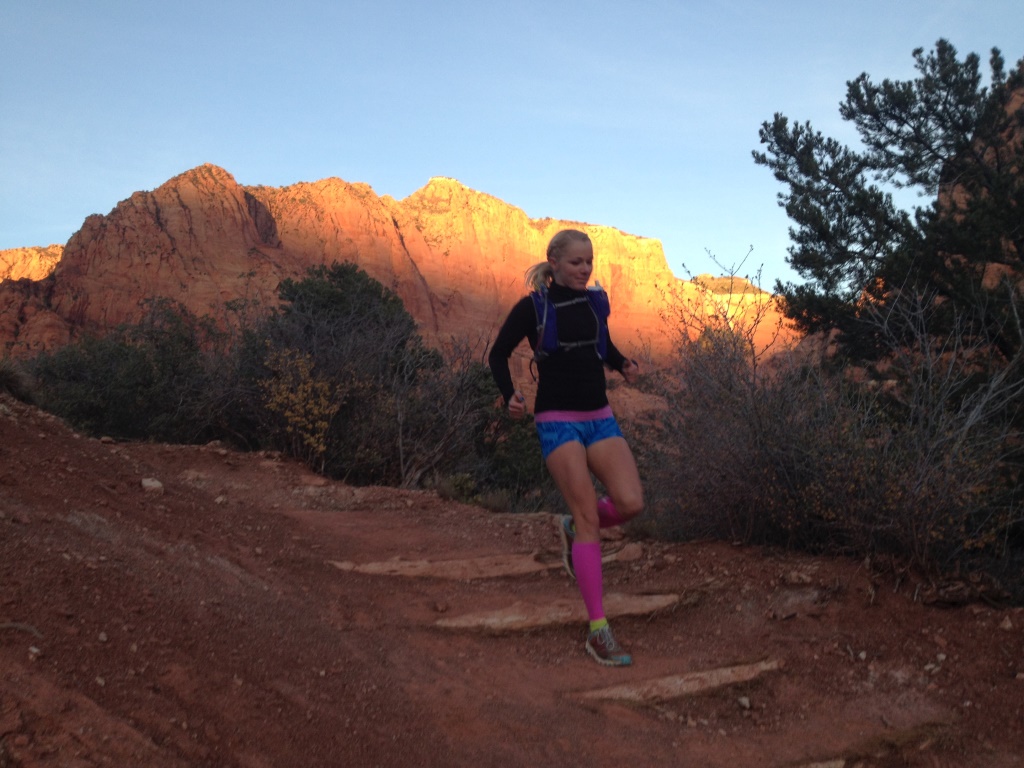 Bring up FORM in a discussion with other runners and nearly everyone will immediately jump to the debate of heel strike versus midfoot strike. The more intelligent discussions might start to involve the hips and landing on a bent knee. But all too often the advice and knowledge end there. While valid discussions, these generally leave out an entire half of your body that play an absolutely critical role in injury prevention and running efficiency. You can’t talk about form without talking about all of the things happening from the waist, up. Body parts like the head and shoulders play a major role in hip stability and relaxation, while the arms and hands contribute significantly to efficiency and speed. Start with these areas before moving to improving the lower body and you’ll see greater improvement in injury prevention and overall effectiveness. Here’s how:

1. Head – watch the great runners and you’ll find that their head, while running, regardless of speed, doesn’t move very much. It is still, focused, like a Cheetah chasing it’s prey, focused on nothing but the path in front. As trail runners we are tasked with more than just body movement. Visual and mental focus are requisite for staying upright and moving at speed. Keeping your head still allows your spin to stay in alignment and your eyes trained solely on the trail in front of you. 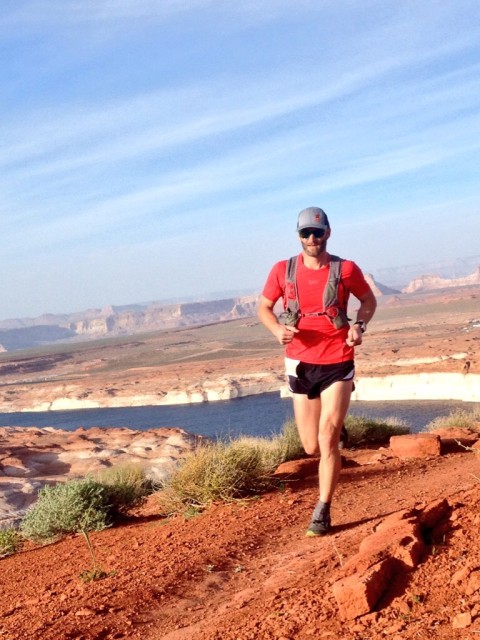 The author is able to run fast near Lake Powell without excessive head movement.

2. Shoulders – posture plays a critical role in injury prevention. Your back should be straight, shoulders back. Even running up a steep hill you should avoid bending over at the waist. Instead, keep the shoulders back and your neck straight, allowing your whole body to lean over the knees. When running on flats continue to keep your shoulders back and your chest out. This puts your hips in alignment, reducing strain on the rear of your hips, allowing them to stay loose and ultimately controlling the impact to your Iliotibial Band. Slouchy shoulders and saggy hips are the single biggest contributor to ITBS, yet one of the easiest things to control. Even during early onset of ITBS, when you are just starting to feel tightness in your knee, you can control the severity of it by aligning your shoulders with your hips. 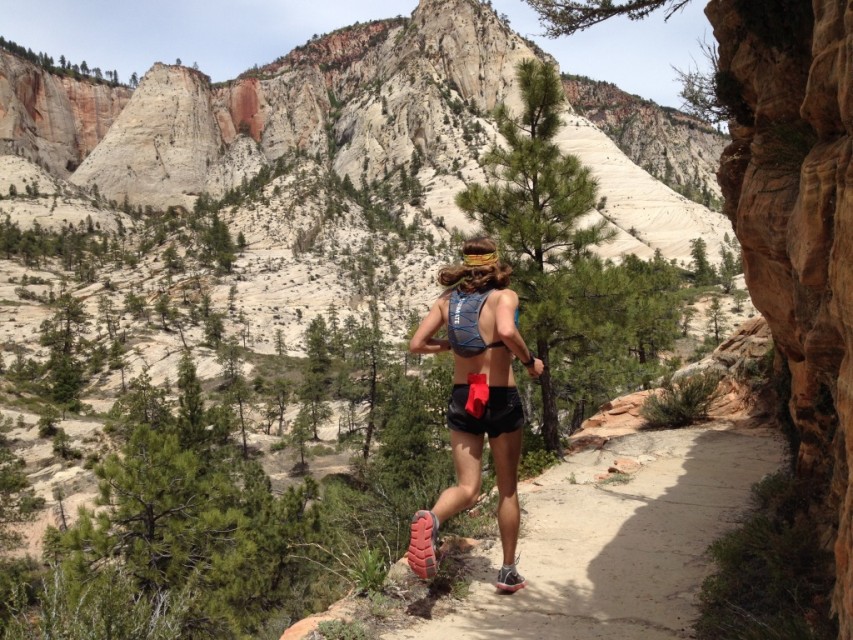 Zac Marion keeping his shoulders back and arms in as he runs through Zion National Park.

3. Arms & Hands – likely the single biggest area for differentiation between runners, most people don’t realize the how much efficiency is lost by over-arm or cross-body swing. Efficient form requires the arms to remain close to the body, elbows back, hands relaxed, but not loosy goosy. Arm movement should be kept relatively minimal unless you’re trying to really pick up the effort. In those cases the significant arm swing should be to the rear, not forward, and driven with the elbows, always keep the hands close to the body and always in front. Once your hands retreat past the lateral line of your body you begin to lose efficiency. Additionally, if your arms swing across the midline of your body you begin to rotate too much, causing impact to your spine and hips. Poor arm movement not only causes you to run slower, but can actually contribute to potential injury. 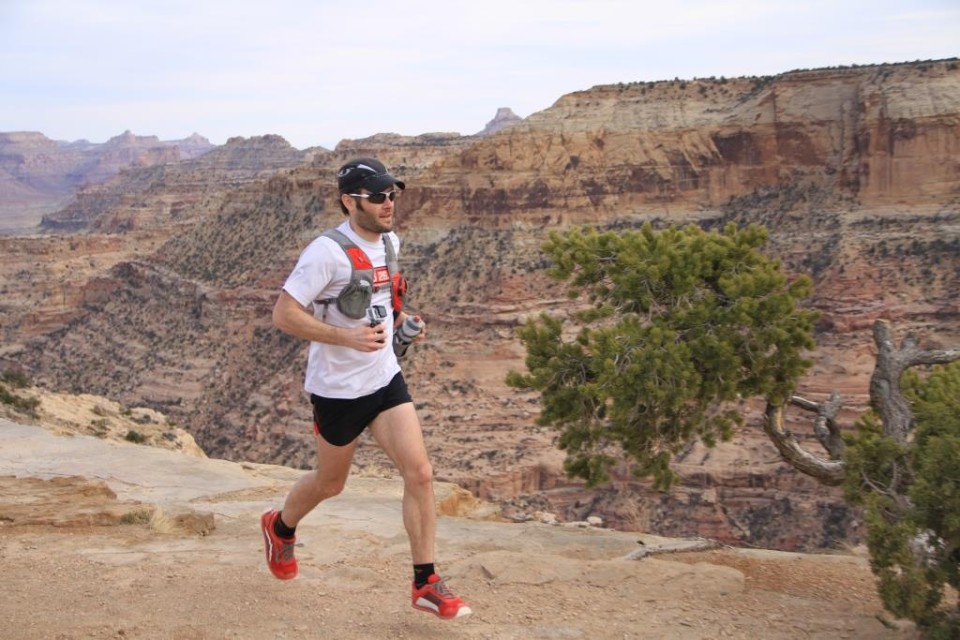 Even when carrying a camera and water bottle, Aaron Williams continues to display proper arm position and movement.

Remember, form is much more than just about what you’re legs are doing, it’s about calculated position and movement. Like any active sport, running has techniques that contribute to effectiveness, excellence, and a lifetime of healthy participation. With simple and subtle changes you can improve your running and decrease chances of injury.

Please share your secrets to healthy running in our Comments section.

» Featured, Training » 3 Essential Form Tips – From the Waist Up

4 Responses to 3 Essential Form Tips – From the Waist Up