The Born to Run was everything I imagined and even more. A fun weekend, filled with music, dancing, camping and running – a celebration of life.

After running the double marathon few weeks before, I was confident going into my very first 100K race. Even though it was little difficult finding out the elevation profile for this run, I was able to determine that there would be about 7500 ft of elevation gain, very similar to what I encountered in Roanoke.

The Born to Run is a brain child of Luis Escobar. It has been described as “cult running”, a Runaissance Faire, and the Burning Man of Distance Running. It is all that and more! The weekend consisted of 4 races, 10 mile, 50K, 100K and 100 miles. The race is run in 2 different 10 mile loops at the East Creek Ranch in Los Olivos, CA. The East Creek Ranch is a working cattle ranch, and while we did not see many cows this year, you could certainly tell that they were around. Each 20 mile loop consisted of single and double track dirt trail. Rolling hills with about 2500ft per loop. 3 longer races started at the same time, Saturday at 6am, while the 10 mile race kicked off shortly after in the opposite direction. Cutoff time for all races is 60 hours. There were 3 aid stations on the course, approximately every 5 miles as well as your own car, where you could stash whatever you wanted. Aid stations were adequately equipped and provided everything you could imagine, including burritos and coconut smoothies. 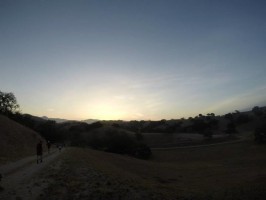 Sunrise over the ranch

Amy and I got to Los Olivos on Friday evening after picking up our awesome campervan that would be our home for the next week (A more detailed blog about our travel adventures is coming soon). We picked up our registration package, and proceeded to find a nice camping spot. That evening we were treated to a most insane music act I have ever seen, the Metalachi! Metalachi is a cross between heavy metal and mariachi music. It was very interesting, amusing, weird, yet catchy, and I cannot get enough of it. In addition to the crazy band, through FundMeNow campaign, runners were able to raise enough money to bring several Tarahumara runners from the Copper Canyon. It was an honor and a privilege to meet and run with these humble people. 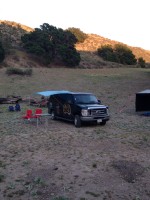 Home for the week

Our wake up call was shotgun blasts at 4:30 am followed by very loud mariachi music. Coffee and food down the hatch, and we were ready to go. We all gathered in front of a stage where Luis gave us our final instructions about each loop, what flags to follow and how not to get lost. Most important of all we all took the oath given by Micah True at the very first Copper Canyon Ultra Marathon:

Amy and I started together at a fairly decent pace. The first (pink) loop had a decent amount of flat terrain so everyone was running faster. 2-3 miles in Amy kept inching ahead of me and soon was few minutes ahead. Considering that we ran our previous race together, I didn’t feel like keeping up with her, and decided to run my own race. She has been doing a lot of speed training and I knew that she would keep a faster pace for the entire race. I settled into a nice rhythm running most of that first loop, walking some of the steeper stuff and finished the first 10 miles in about 1:35 minutes. The race course went through the camp after each loop, where we could refuel at our cars, before we headed back to do the second 10 mile (yellow) loop. I saw Amy as she was going out on this loop, and that would be the last time we would see each other until the end. Actually rather interesting considering several overlaps on the course. 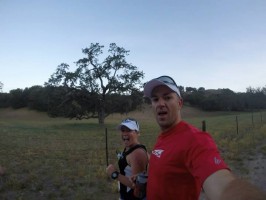 The 2nd loop started off with a flat piece until it got out of the camp. Shortly after that it went uphill and it would continue to be up and down for the duration. Definitely a lot harder than the pink loop. While more difficult, yellow loop was beautiful. We got to run over a tall ridge that would show us the entire valley. There was a lot more walking on this loop and I finished it in under 2 hours. Since all 3 races were going on at the same time there was still a decent number of people on the course, but the herd was thinning out fast. I was focused on pacing myself for the entire race, and really didn’t want to get pulled into running some parts that I would later regret. 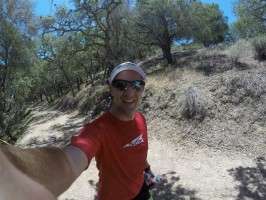 It is getting hot

20 miles in and I was still feeling good and strong. While the temperature at the start hovered in the low 50s, as soon as the sun came out, it started getting warm fast. It got into the high 80s in the middle part of the day. 3rd loop was still manageable and it went by pretty quick with a lot of 50K folks speeding up to finish their race. Shortly into the 4th loop, around mile 33-35 I started to hit my low point and my stomach was starting to feel funny. Here we go again, I told myself, but going through something similar in Roanoke snapped me out of it. I took my time, fueled, walked, and sure enough, I was on my way. After the 3rd loop I felt I was running by myself for long periods of time. At one point I did not see a single person for over an hour until I reached an aid station. I ran with 2 bottles since there was plenty of refilling opportunities, and while 1 bottle was used predominately for my Tailwind, the 2nd bottle was used for dosing myself with water. Every chance I got I was spraying water on my head, and making a good use of aid station ice buckets. That, along with taking some salt pills, really helped get me through that middle part of the day and loops 4 and part of 5.

Running 52 miles few weeks before, really gave me the confidence as I started on my last loop. It wasn’t easy but I was in it until the end. Unlike Roanoke, where I thought I would need to stop and quit, I was confident in my training and abilities. “Embrace the suck” was my motto for the last 10 miles of the race. Also, the fact that Luis would not give you the amazing finisher amulet unless you finished the race you signed up for, kept me pushing along. Along the way, I ended up running with a lot of interesting people. It is one of the things that makes the ultrarunning what it is. I credit those folks for making the race go by quick. From the couple doing the 100 miles and taking it easy in the middle part of the day, to my new friend Mike from Santa Barbara. Mike and I ran most of the 2nd 30 miles together. He would catch and lose me, and I would catch and lose him. We played that game all day, but at the end we ended up finishing few minutes apart. It was good to bounce positive thoughts and energy of someone else.

As I ran into the camp for the final time, I knew there would be two more miles to go, to complete the 100K, 62 mile circle. Amy was already done, and cheered me on as I ran by. In my stupidity, I kept running with my bottles instead of tossing them to her. I picked up my pace, ran through the check point, and did my 1 mile out and back loop to complete my first 100K in 13:44:30. That time was good enough for 18th place overall. Amy finished in 12:57:35 and was 3rd place female and 14th overall. I was super excited with my time. Before going into the race I had 3 imaginary goals: finish the race, finish the race in less than 16 hours and finish the race in 12 hours. Well I accomplished 2 goals so that was good enough for me. Later I would find out that I was 3rd male in my age group. I will take it.

I was very happy with all the gear I used for this race, from my Altra Olympus shoes, Thorlos socks, to Ultraspire handhelds and Tailwind for fueling. The Olympus has been absolutely incredible during these long races. UltraSpire is my go to bottle, and with the addition of the new caps, it has been perfect. And I’ve said it many times before, but Tailwind has been a great race day fuel for me. Calories and electrolytes all in one package. Cocogo has been a great post-race drink for both Amy and I. It really helped us get rehydrated properly after running all day.

It is really hard to describe the Born To Run weekend and the race. I think we picked a perfect place and location for our first 100K. I gave it my all, and I have no regrets at all about the race itself. That night we celebrated with burritos, beer and more music. What a perfect weekend. While we missed some of the Friday activities, we got to experience most of the weekend. I am not going to lie, while running through the camp, I was jealous of all the people partying while I was still running, but in the end I am grateful that I accomplished a goal set many months before. There is always next year.

Spending a weekend hanging out, dancing, camping and running among free spirited runners gave me a new appreciation of our sport and a different perspective on racing and life. Born to Run is a unique experience, that is not for everyone, but those that find themselves running the hills of the California Central Coast some day, will not regret it. It is a memory that I will cherish forever.

Kuira Ba. Corre Libre – We are One. Run Free. 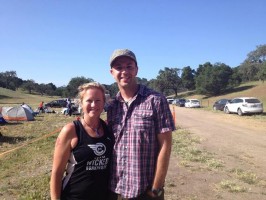 We will be back

About the Author: Emir Dedić

One Response to Corre Libre – Born To Run 100K