The Spry, by UltrAspire, is a race vest was inspired by ultra running great Krissy Moehl. While she prefers to run and race with handheld water bottles, she also recognizes the need to carry the essentials. The result has been the Spry race vest.

This sleek vest offers the traditional vest pockets up front; one zip with trash collection pocket and a cinch mesh pocket on the other side. Additionally it offers the standard UltrAspire pill pocket on the left strap, a must for all vests nowadays. In the rear, unlike other vests, the Spry offers only a single large storage pocket with magnetic closure. What makes the 2013 version different from the original is the addition of a 1 Liter bladder that fits in the rear pocket, that’s it.

TrailAndUltraRunning.com tested the new 2013 version and since I own the original I figured I’d do a side by side analysis. Without making this review too short let me just say that the addition of the bladder for longer, unsupported runs is perfect. I actually let my wife wear it in a local half marathon and she was able to run the entire race without having to stop at a single aid station. The convenience of the bladder and function of the vest allowed her to shave several minutes off her overall time because she didn’t have to stop among the masses trying to get access to gels and water cups – she had everything she needed. 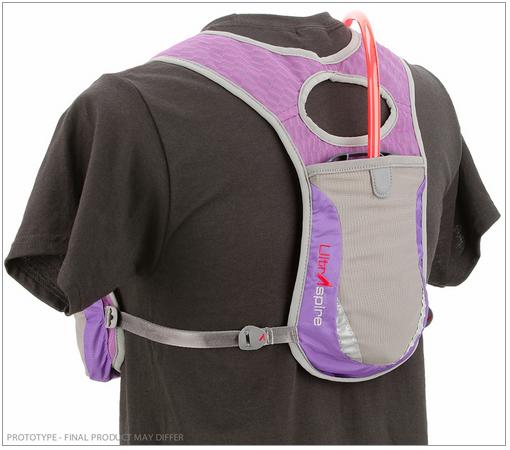 Like Krissy, I prefer to race with a handheld water bottle. Recently I raced the inaugural Bryce 100 mile endurance race. Located in central Utah and at high elevation I assumed I could run the entire race with just one water bottle. Because I thought I’d be running a little slower than normal – as I was running with a friend who was doing his first 100, start to finish, and had to carry a Sony Action Cam – I figured I’d better throw an empty 10oz water bottle in the back, just in case. I wore the vest for 100 miles and nearly 27 hours over tough terrain, long climbs, and bomber descents. For 30 miles of the race I had the 10oz in the rear filled, but never used it. And never noticed it was there. The front zip pocket carried my camera and I was able to fit three gels and a packet of Chomps in the mesh sync pocket. In all that time and distance the vest was never uncomfortable.

What makes it really great is that because it is so streamlined, when I need to remove and wear my jacket and gloves during the night I was able to do so over the vest. The convenience of being able to zip and unzip my jacket, but still have access to the vest was incredible. While others had to fumble through cinch straps to get to their jacket, mine was on top. That made my whole race through the night more efficient.

It boils down to this; I’ve used and tested a lot of vests in the last few years and I can say with certainty that for racing this is the best vest on the market. Used with the 1 Liter bladder, combined with handheld water bottles ,or carry just an extra in the front mesh pocket and the convenience and weight of the Spry makes it the most efficient race vest on the market. I would recommend it to anyone.