So you had a bad race?

The Dutch, The Sky, The Woods. The Trails Of Bavaria

Sometimes a nice run through the snow develops to a bizarre event. Preparing for a smooth cruise on a sunny Sunday morning I discovered some hot air balloons floating over the area. “Wow” I thought to myself, should be a “once-in-a-lifetime-thing-to-do”, being a passenger and hanging in a gondola under a balloon. Might be fun….

The town of Inzell is one of the most known centers for ice-speed-skating and until the Olympics in Sochi, Russia, they had the world’s most modern ice-skating arena. It is located between Mozart’s town of SALZBURG (Austria) and Pretzel’s town of MUNICH (Germany). By car you need around 20 minutes to get to a 3500ft hill, called STOISSER  ALM. In the summer season, the hut at the top of the hill is very crowded with people of the area. Most of them take a short but steep ride by bike – 700 meters elevation and 6 kilometers – on a forest motor road. It is a spot where you won’t find a lot of tourists, because the view from here is just OK and not as good as the view from higher mountains around.

For trail running, there is a variety of paths, some of them are nice single-track. Nevertheless the STOISSER ALM is a hill that you might run up two or three times a year. Nice. Nothing else. In winter the trails are hidden under the snow, so the access to the STOISSER ALM is possible only with skis and snowshoes. My challenge for today was to climb up without skis and snowshoes. Each day another challenge…..

As I drove towards the STOISSER ALM-Hill my eyes followed some of the balloons in the sky. One of them was flying only about hundred meters above me, so I could read what was written on it. Looked like advertising for a dutch company. “Well, they should climb up” I said to myself – “Otherwise they won’t get it over the STOISSER ALM-Hill”.

The first 4 kilometers through the woods are easy to run. 8% grade on a wide path that a snow blower had prepared for hikers and sledge drivers. Deep, blinking, fresh, white powder and silence. No one in the woods. I  jogged up the first 2 kilometers, enjoying the atmosphere. No noise, no colors – only the sun shining through the woods and the sounds of silence. 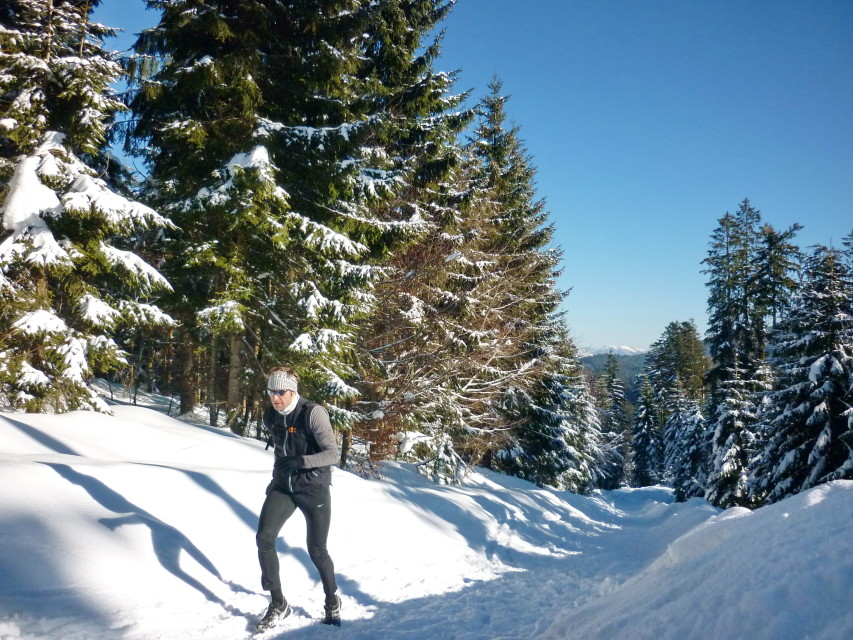 Suddenly I was frightened by a sound I could not identify. It lasted only two or three seconds and  sounded like a starting rocket on new year’s eve. I looked around me to find out where it had come from. Nothing. Only sun, snow, silence.

Again this noise. Again, I tried to locate the direction. It was……over me. A huge balloon floating only some 30 meters over me, trying to climb by pumping some more gas in the balloon cover.

I continued my run, coming to a natural balcony with a great view over Inzell. I took some pictures, said “Hello” to two ladies sitting on a bench in the sun, and ran on. An other 10 Minutes later, I arrived a dead end. The snow blower had stopped there, so I had to continue my uphill trip through deep snow.

Happy to see some human tracks in the snow I used these footsteps. This saves a lot of energy and you don’t sink in the snow too far. If you are running trails without using poles, you should try to do so in winter time. As far as you cross some snow fields with elevation and as far as you sink in, poles are a great support for your legs. If you’ve never used poles before, you will never forget your first snow-vert-run. For the next few days your arms and shoulders will hurt like hell!

I fought against sinking in the snow, managed to reach the close hut on the top of the STOISSER ALM-hill and changed my shirt. As a born downhill-runner I enjoy rocking the trails. Jumping like a young deer from stone to stone, downhill running is full of action and fun. When you’re running through deep snow, you won’t get to the ‘ground’, so downhill running can be very tough work. You run three, four, five steps, and on the next step, your leg disappears in the ground…and your body tries to follow. Back to the forest motor road and to “civilization”, I forced myself to a higher speed. YEAHHH.

Passing the two ladies, who were now on the way back downwards, I followed the path, happy with the day. After a curve, I had to do a harsh break, almost losing control and jumping in the high snow walls at the roadside. In front of me, hanging between two giant trees, was the dutch balloon. The gondola, hovering only 3-4 meters above the ground and balloonists with his eyes wide. A man called and threw a rope down. “Hey, can you help us? We need to pull the balloon down to the ground.” 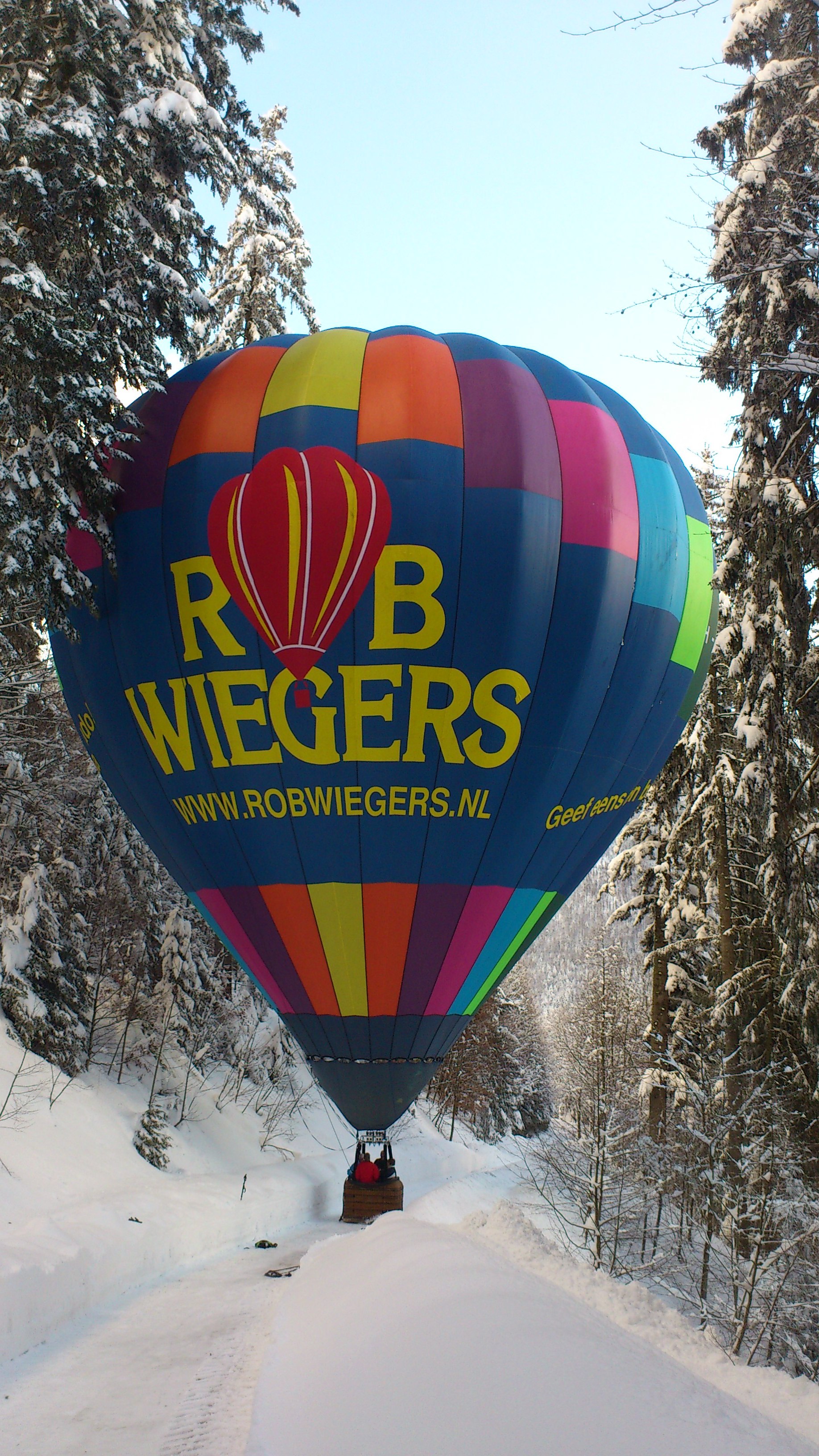 Not your ordinary trail blockage

One of the pilots climbed over the edge of the passenger’s basket sliding down the rope like a circus-artist. “Oh dear, we got out of gas and as there is no wind, we had to land,” he said to me. Together we pulled the rope. The trees began to shake slowly, freeing the balloon. Once aground, I took a few pictures, wished the crew a nice day and continued my trip. “Balloon stuck in forest” – A great headline for the local newspaper.

The next day was as nice as the day before, so I took my equipment, got into the car and drove the direction of Inzell again. Not far away I discovered a balloon, the dutch balloon! They seemed to be sitting on the top of the woods, gently resting on the trees. I stopped my car and watched their fight against sinking into the trees (I suppose the dutch are not used to flying in the mountains. Their land is flat and lies 2 meters below sea-level). A long rocket-sound, some slight wind, 10, 20 seconds, and they got free.

Hopefully they have enough gas with them today…

Floating above the trees

» inspiration, Trails, Training » The Dutch, The Sky, The Woods. The Trails Of Bavaria

One Response to The Dutch, The Sky, The Woods. The Trails Of Bavaria