A 28-year-old dentist from Belgium just completed the Appalachian Trail in record time. Not only did he beat it, but he crushed it by four days, finishing the 2190 mile journey in 41 days, 7 hrs and 39 minutes. This would be the Belgian’s second FKT record, having set the Pacific Crest Trail record back in 2016 (52 days 12 hours 25 minutes).

But he isn’t just a dentist by day and a record smasher by night (and day). He has a name and a story to share of how he got where he is and how he completed such a phenomenal feat.

So, who is “he” and what’s his backstory?

Karel Sabbe is his name, and his story began long ago as a child when his parents would take him and his siblings on adventures.

“Travels were always active and never lying on a beach for an entire week,” Sabbe recalled. “We usually went into the mountains (Alps, Corsica, United Kingdom, etc).”

It wasn’t until he was 17 years old, however, after hiking Corsica’s GR-20, when Sabbe says he really got the hiking bug. This adventure led him places like the Pyrenean High Route, the Alta Via 2 in the Dolomites, the Rim to Rim in the Grand Canyon, as well as hikes in Iceland, Central Asia, Namibia, and a thousand miles in New Zealand. He even completed New Zealand’s Coast to Coast race, finding that he was talented at trail and ultra running.

Fast forward a few years, Sabbe found himself spending a summer volunteering at the US National Parks, and that is when it all clicked.

“The idea of hiking the PCT and the AT came when I was volunteering a summer in national parks in the US maintaining trails in the Grand Canyon and Zion,” he said. “At the campfires with the trail crews we were often talking about trails and the ones that stood out were the PCT and the AT. … I am more fascinated by an ‘is it possible or not?’ than by a ‘can I do it faster than the others?’ I feel very motivated to be challenged by something that seems impossible. … FKT attempts also allow you to ‘race’ in places that would never allow an actual race to take place. You can start when you want and make it your own adventure with no crowds and no people. It is also very close to the hiking community and experience and that is where my heart is at.”

And after setting the PCT record, Sabbe set his sights on the AT for a few reasons including the history, the epicness of the trail, because it’s “the roughest, toughest long-distance trail of the U.S.,” and because of all the continuous single track. 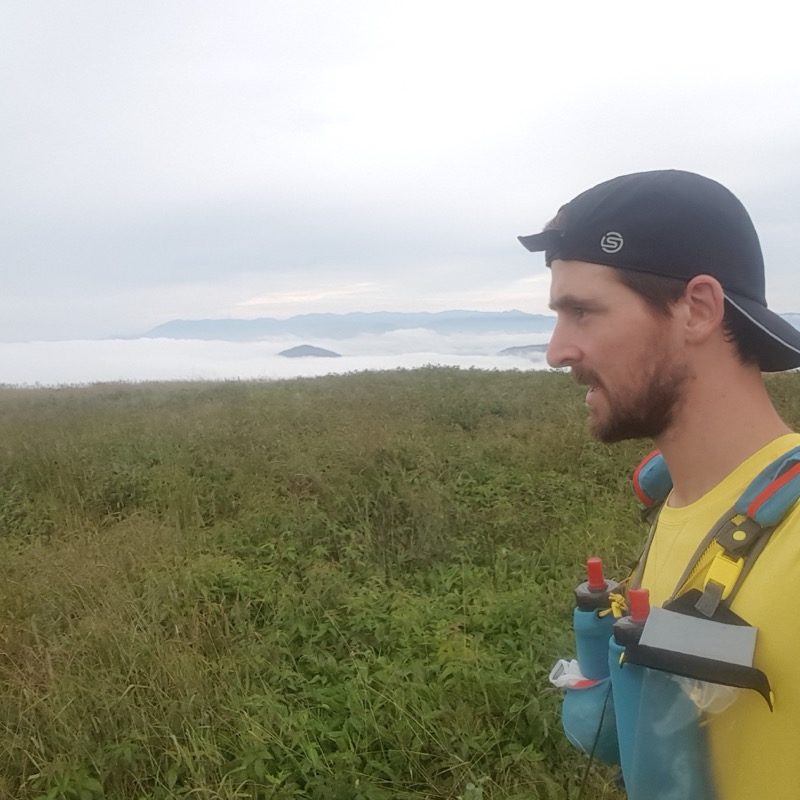 The record-setting hike and how he did it

At 4:30 a.m. on July 18th, 2018 — Just two years after his PCT record that he currently still holds — Sabbe, along with his crew, began his Appalachian Trail journey.

But it wasn’t just a fly-by-the-seat-of-his-pants endeavor — as these things often aren’t. Sabbe had specific instructions for his crew and expectations of himself. There would be no wasted time, and he would be proactive about keeping his body and mind in top condition throughout.

In order to do this, Sabbe said that there were a few key things that made big differences in his journey. 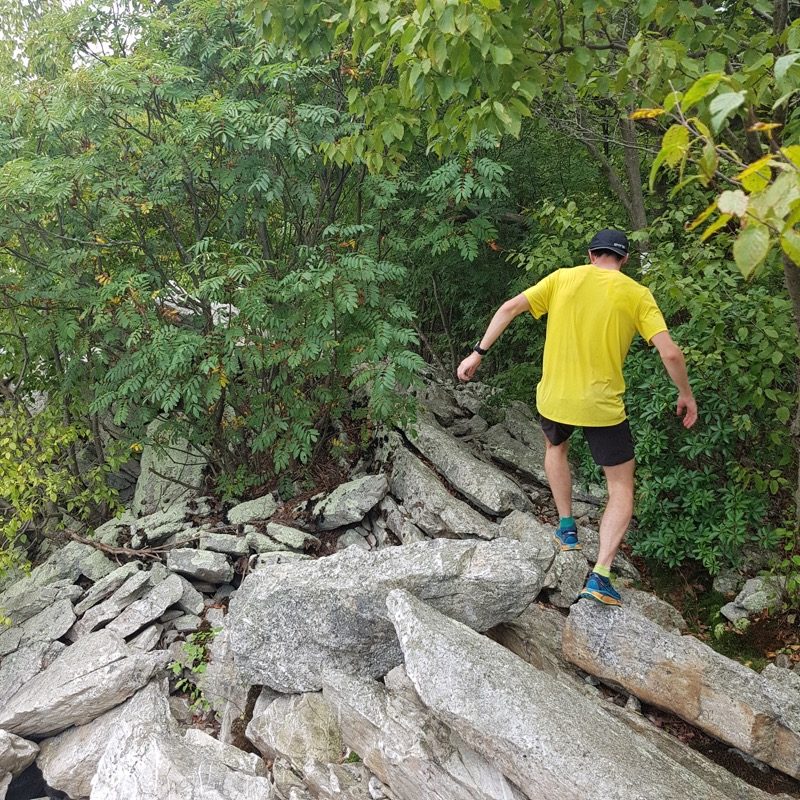 “There were a few key factors, that made a difference,” Sabbe said. “One of them was to get up and go. There was no waste of time in the morning. The alarm went off and without exception, and I had to be at least hiking within 30 minutes. I usually drank my coffee while hiking that first few hundred meters, which did make a difference if you compare that to sitting down and enjoying your coffee and then starting to run. It also gave my feet and legs a few minutes to get into it again.”

“There was also no wasted time at the meet-ups,” Sabbe continued. “We didn’t have a chair because it was supposed to be uncomfortable at a meet-up. My backpack for the next section was always ready, and my support friend, Joren Biebuyck (Joe) just had to move the GPS tracker and I was ready to go again. The idea was to only have longer breaks if my feet needed it (if they were feeling bad and if they needed air) but otherwise, we would say before I sat down (on the trunk or on the ground) how long the break would take. You cannot believe how fast it becomes a 20-minute break if you don’t approach it this way!” 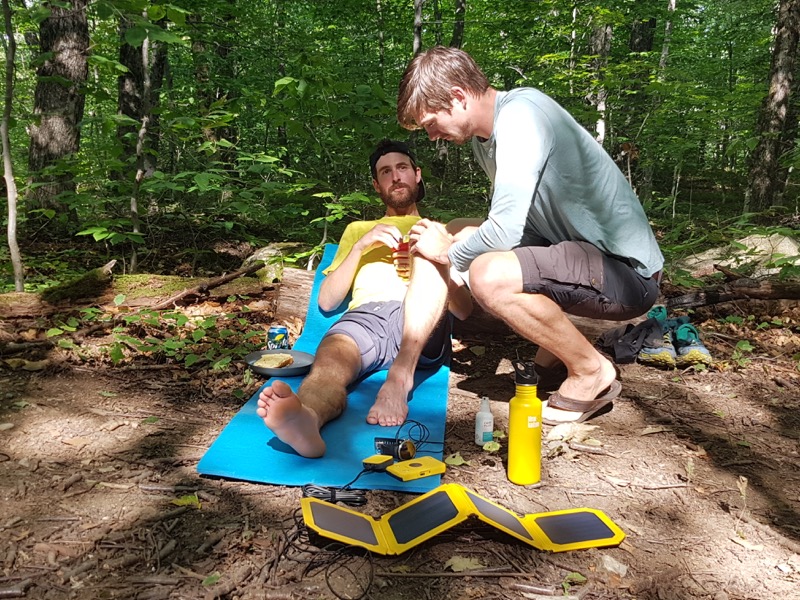 Sabbe said there was no time for power naps, and if he got tired, he would continue on until the fatigue passed. He said that keeping moving always paid off at the end of the day. And true to morning coffee form, Sabbe often just ate on the go, taking time to eat during the sections that were unrunnable, using technical or steeper climbs to eat instead of wasting runnable terrain by hiking.

4. Do night runs in the morning

Another time-saving effort included doing his night running in the morning.

“After learning about other record runners, I found that they lost a lot of time during the night, where their speed dropped or they started struggling,” Sabbe said. “I decided to flip things around and take my night sections in the morning. I started running at 3: 55 a.m., which allowed me to have 38 out of the 41 days where I arrived before sunset. This helped a lot because in those morning runs I went pretty fast and I always made it a little challenge to get in as many miles possible before sunrise. You then get the sunrise boost and by 11: 30 a.m. I was usually over half-way for that day which made for a second boost.” 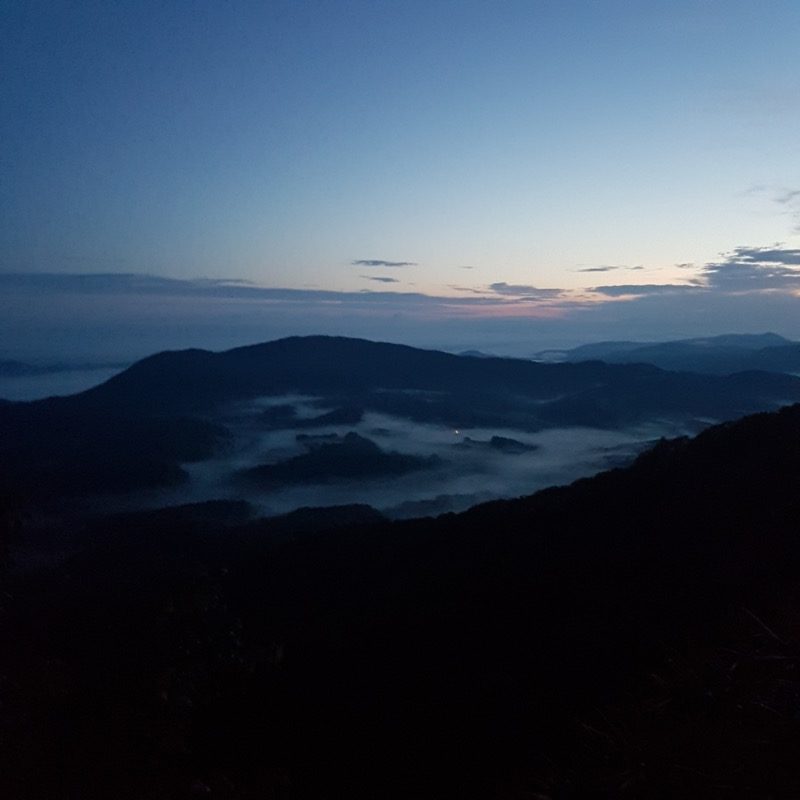 5. No wasted time on extra distance

“I ran with my GPS watch on and a GPS track open of the morning section,” Sabbe said. “This allowed me to not have to look for blazes or be worried about taking a wrong turn (and taking out the GPS, waiting for it to find location etc.). My crew was also very focused on not letting me do any off-trail meters. When a parking spot would be 100 meters away from the A.T. they would just bring up a box of supplies to the actual trail and wait there for me to save me those 200 meters of going to the car and back.” 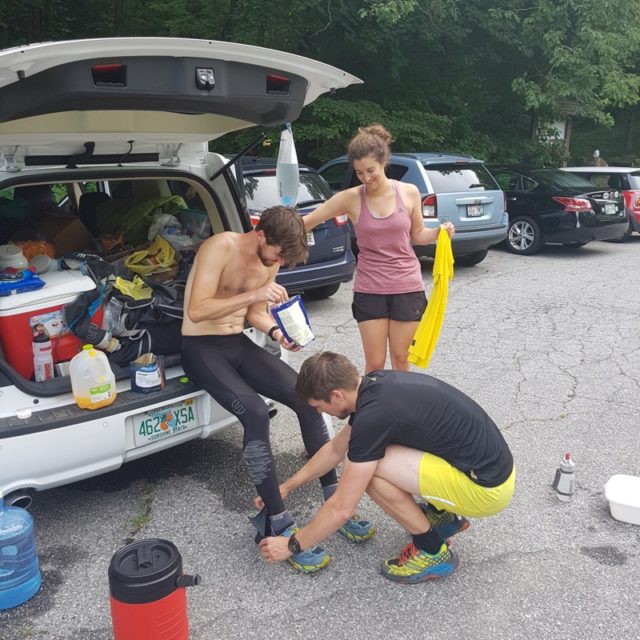 6. Stay on top of injury prevention and maintenance

Sabbe’s support crew, Joe is a physio (physical therapist), and was key to keeping him healthy. He said that whenever he felt an injury coming on, Joe would treat it and give advice. This allowed him to stay injury-free the entire time, which according to Sabbe, took a definitely day- a day-and-a-half off the record as all other record setters had gone through major injuries.

A couple of things he made sure to do were to ice his shins daily, as well as areas that started hurting. He also made sure to take care of his feet.

“Painful feet makes for slower running, so feet-care was one of the number one priorities,” Sabe said. “I would clean them in water every night — and sometimes during the day — and I would soak them in an algae/salt mixture for 12 minutes to keep them in shape. I would use creams at night to strengthen them and I would remove callus if it was getting too much. I also used cream to get the callus areas softer which helped as well. All this made it so my feet didn’t hurt at all, and I only had one small blister in the first week. This made it possible for me to run freely and strongly all the time. I also had about 30 pairs of socks and would change often.”

But it wasn’t just the logistics that got him through

Logistics aside, there was just something about being out on the Appalachian Trail that helped Sabbe reach his goal.

“Those beautiful sunrises were my daily highlights,” Sabbe said. “Sometimes the downpours would get me back to childhood memories where you run barefoot in the rain. I would enjoy that so much! I remember one particular downpour in the Shenandoah national park where the whole trail was flooded and I was so excited splashing on the trail and running through the puddles. The wildlife was also something that kept me going. Seeing bears and realizing how wild the trail was, was such a motivation as well.” 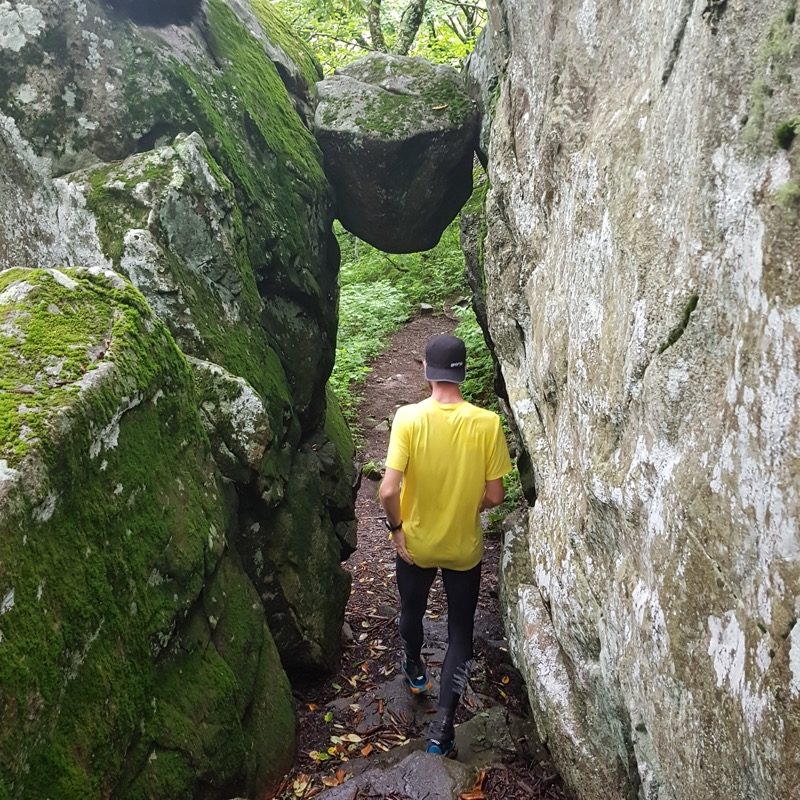 And then there were the people who helped along the way just to be a part of his journey. Sabbe spoke about hiking up the historic Mountain Katahdin with Joe, and how special it was. He then spoke about the unexpected help from people in the community. 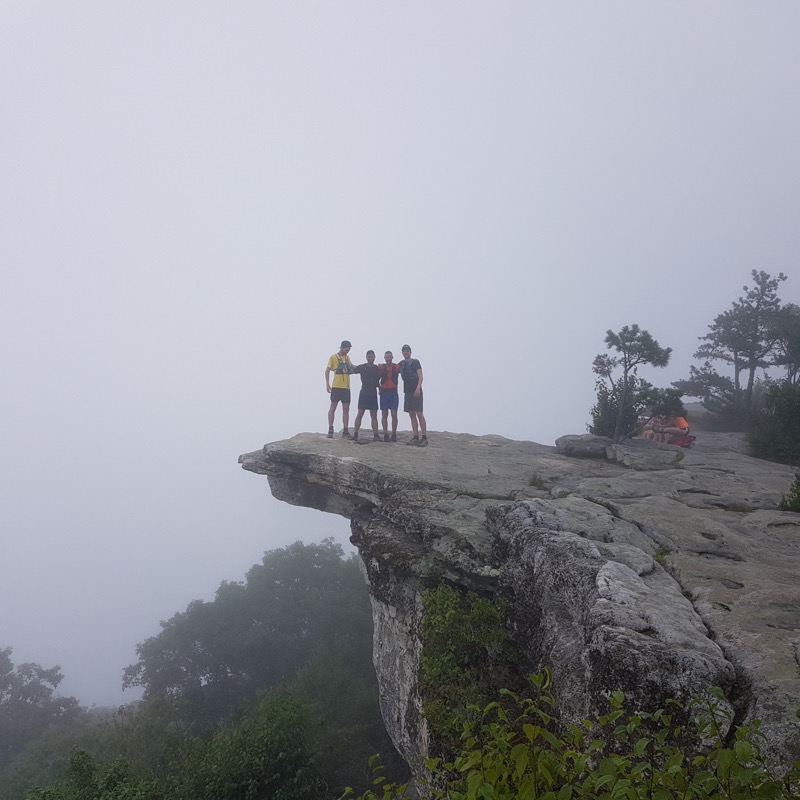 “People coming out to run sections with me was also really nice,” Sabbe said. “Some people took a day off work, some people were waiting for me at 4:00 a.m. so they could run with me before their daily job started. I felt flattered when people did this for me! One guy named Ted even got up at 1: 10 a.m. after sleeping in his car, then went up to Mount Washington in full rain, with 50 mph winds and freezing cold, waited on the summit for me for 2 hours, just to guide me safely through the presidential range. When I got up there, I was cold as and feeling a bit miserable. It was such a relief to see somebody waiting for me and to know I had company for the next few hours.” 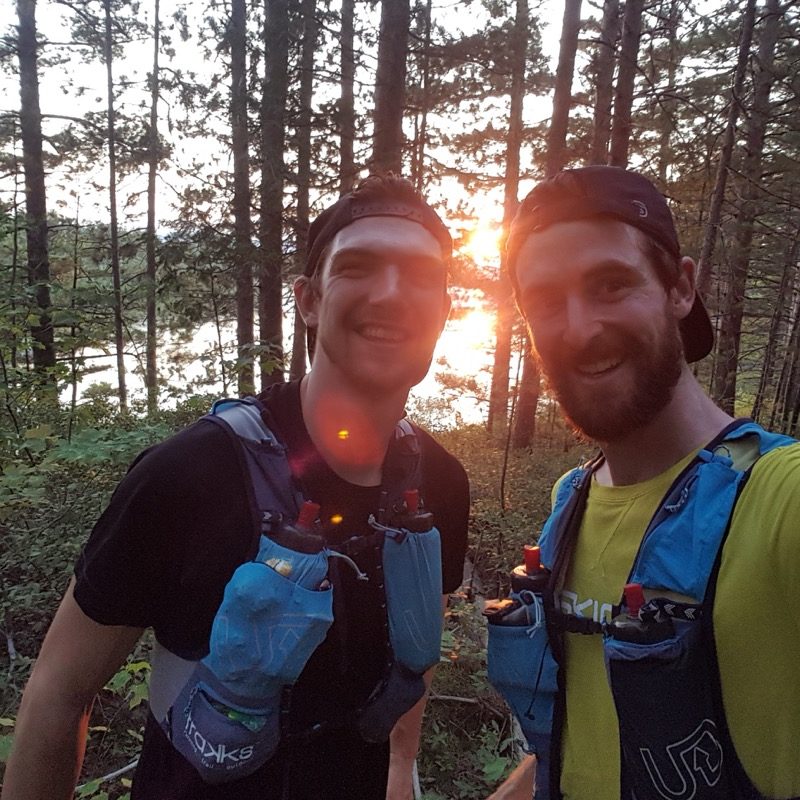 When asked if there were any times on the AT he’d rather not remember, Sabbe remained positive, stating that it was a wonderful experience.

So, what’s next for this 28-year-old dentist/world-record-holding immortal?

Just like anyone who treks an extraordinarily long distance would like to have following their efforts, Sabbe is looking forward to some rest.

“I am going to rest and enjoy this experience and let it sink in a bit more,” Sabbe said. “I definitely did not finish thinking ‘Never again!’ So don’t be surprised if I will go for another speed record in the future.

He noted hikes in New Zealand (perhaps the Te Araroa Trail that covers the length of New Zealand) as a possible contender. For now, Sabbe says it’s time to take it easy and focus on other things like renovating his house and enjoying short runs again — that is until the uneasiness returns and new adventures come up.

This Adventure Article brought to you by Kogalla