The Barkley Marathon – the race that eats its...

One of the most important rules of ultra running – don’t try something new on race day. It could be assumed that the same rule applies for two days prior to a race. However, I found myself, along with Pete Stoughton (Brand Relations Manager for TAUR) running through the desert of southeastern Utah, not far from Kanab, towards a small slot canyon that goes by the name of Peekaboo. A casual 12 mile run seemed like a swell idea, just two days before tackling the brutal Antelope Canyon 50 miler, a race with a torturous 35 miles of deep sand.

Our run wound us through and around dried up stream beds as we made our way toward the easily accessible slot canyon. We had no intentions of running hard at the race two days later, so we felt that a medium length run in sand would be ok. Under those assumptions, why not try a new product we were reviewing, 2Toms SportShield. It seemed simple enough, but would a 12 mile run really provide an adequate test of an anti-chafing product? While the 5 mile run to the canyon was uneventful, the canyon itself was incredible and provided a few obstacles that were borderline dangerous. In the end, we exited the canyon safely and cruised back to our families at the animal sanctuary without incident and massive smiles on our faces. We also finished with tired legs, but no chafing. Fair enough, maybe it works.

It is said that the best products for running are the ones you never have to think about, even when the run is over. Two days later, on tired legs, I stood at the starting line of the Antelope Canyon 50 Miler, ready to run. I haven’t run or raced with any concerns about socks, shoes, hydration vest, or running clothes for years. But there was now a change in my habits, something new. With the start of the race I went out with two great friends, Pete an Scott. We ran and laughed as the miles flew by, staying together for more than half the race.

The Antelope Canyon 50 runs through four different slot canyons, across the sandy desert, along the rim of HorseShoe Bend, and around the city of Page. Just when you don’t think you can handle the brutal sand any longer, you are presented with sights so profound that all your woes float away. And then it’s over and you’re back to the slog. I ran well and felt strong. Unfortunately, our plans for the three of us to run together the whole race fell apart as first Scott succumbed to an upset stomach around mile 25 and he fell back. Within another two miles Pete had also fallen folly to the growing heat and exposure of the day and was fighting to keep moving at a reasonable pace. Myself, I felt strong and like I had paced well. I continued to push at a strong pace, catching up and running with other racers, making new friends, and ultimately finishing strong in a respectable 11th place (out of approximately 275). I was pleased to see both Scott and then Pete come in within the following hour, both rebounding from their earlier struggles to finish strong. 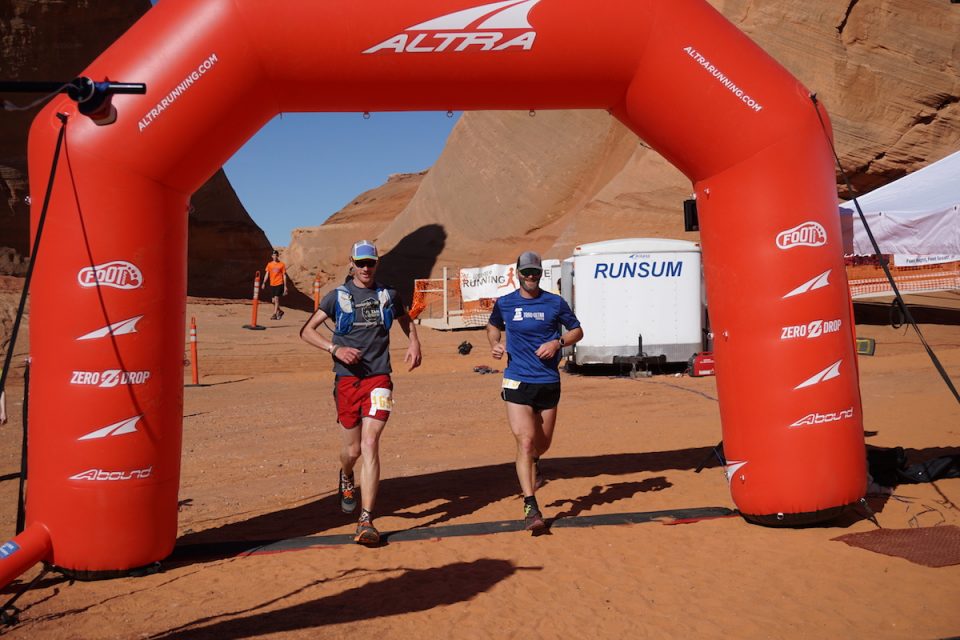 I lounged around the finish line for another couple of hours with my family, watching other friends finish their races, and celebrating a great day all around. The desert calls to me, pulls at my soul. Those two days were fulfilling in a way I rarely experience. The mountains will always have my heart, but there is something about the desert, the desert might have my soul. Hours after finishing my race, after a full day of running and socializing, I finally was able to shower. It was then I remembered I had broken the cardinal rule of running, I had tried something new on race day. Yet, I was fully unaware. The thought never occurred to me, not even once. I doubt there is any greater compliment to be paid to such a product, the idea that I was completely unaware of its use. For that it gets a full 5 out of 5, a score we rarely give.

Now, two months later, I look back at those couple of days as some of the best I’ve had on my feet. I had an incredible weekend with friends and family. I feel blessed to be able to live and explore such inspiring places and associate with so many amazing people. This community is truly fantastic.

One Response to 2Toms SportShield Review & Adventures in Southeastern Utah