Complaining about running on a treadmill is the ‘epitome of a first world problem:’ Jacob Puzey describes why treadmill training is important to him

It was a night he’d never forget. 15-year old Jacob Puzey was eating dinner at Union Station in Washington, DC while on a business trip with his dad when the unthinkable happened. There was a shooting in a nearby movie theatre, where several were injured including a young man Puzey’s age who was shot in the chest. Puzey recalled watching the boy being pulled from the theater in a stretcher and meeting eyes with him where he saw what was nothing short of fear and powerlessness.

The next day, paralyzed by that same fear and powerlessness, Puzey who was a high school track athlete at the time, decided that he would do his training run on the hotel treadmill rather than subject himself to the scary world outside. It was his first time on a treadmill, and due to the emotions of the day, Puzey said he was only able to last a few minutes before he had to stop.

Recognizing the fear that was now very present in his teenage son, Puzey’s dad encouraged him to run outside and face that fear.

“Immediately following the shooting, I felt like I should insulate myself from real life by running inside because some kids my age couldn’t even go to the movies without getting shot,” Puzey said. “I am grateful to my dad for trusting a small town kid like me to go outside by myself in the same neighborhood where we had just witnessed a shooting and continue my run. It allowed me to run outside to run down my fears.”

That night at Union Station wasn’t the last time he’d be confronted with tragedy firsthand, forever shaking his perspective and his approaches to life and running. In fact, it was just a few years after the incident when Puzey spent two years in the ghettos of Latin America, serving many of the people there.

“While in Latin America, I witnessed extreme poverty and extreme violence, and unfortunately the incident in DC was more of the norm than the exception in some of the neighborhoods in which I lived,” Puzey said. “The experiences I had over those two years shaped me and humbled me and taught me to always be grateful for what I have.”

With those two life-shaping experiences, Puzey decided to move forward both as a person and an athlete with a strong desire to confront his fears head-on while always being grateful for what he has.

This way of training would be put to the test after while preparing for his first marathon during the winter while attending Ricks College in Rexburg, Idaho. As it is in the intermountain west, the winters are bitter cold, dark, snowy and icy. Puzy wanted to face the challenges and continue his love of running outdoors but needed to be smart.

“It was cold and snowy and dark and I didn’t want to risk falling and injuring myself as I had in the past,” Puzey said. “So I went to the gym at the university I was attending tried to fit in 10 miles on the treadmill before class every day.”

It was during that time when Puzey said he was grateful he had access to a treadmill so that he could safely work toward the goals he had set for himself. He even found that he quite liked logging the miles indoors.

“I really like running on the treadmill because it removes some of the other variables and distractions of running outside and allows me to better connect with what my body is doing,” Puzey said. “Running with mirrors in front or to the side can also be helpful in fixing form issues.

I am grateful for the opportunity to run regardless of the setting. I live in a beautiful place so it is always nice to get outside and explore, but doing so doesn’t always align with my family, work, training goals and commitments.”

One of those training goals included breaking the 50-mile treadmill world record in 2016. 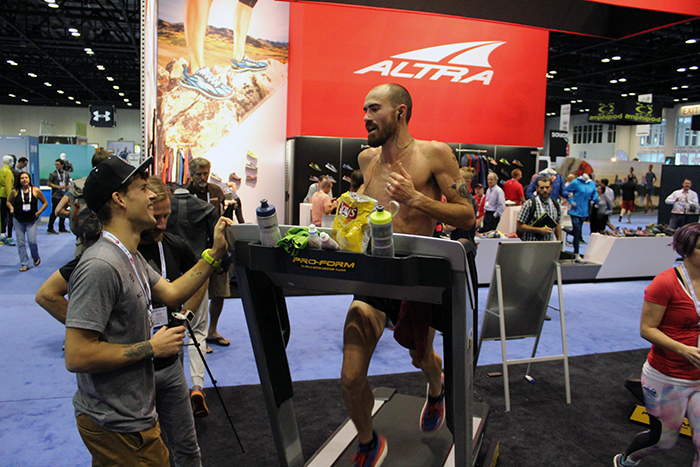 “The day I broke the record for 50 miles on the treadmill really opened my eyes,” Puzey said. “I had no idea I’d run that fast. I had no intention to run that fast. I hadn’t spent much time looking at previous attempts other than the actual time that I figured I should be able to get.  Now that I know I am capable of running that fast (on a treadmill), I’d be interested to see if I could go any faster on the treadmill or on the roads or a track event. That said, I recognize that I was blessed with a special day, and I won’t be disappointed if I’m not able to match or better the record of if/when someone else beats the current record.”

Even after running 50 consecutive miles on a treadmill, that didn’t deter Puzey from using it as a regular training tool.

“One of my biggest pet-peeves is when people complain about having to run on a treadmill,” Puzey said. “To me, that is the epitome of a first-world problem. While running has opened countless doors and enabled me to access beautiful places, it didn’t start as a love affair with terrestrial beauty, but rather an innate desire to focus and improve myself. Treadmill training has enabled me to improve my form, fine-tune my nutrition, and train safely and consistently even during inclement weather. I am able to not feel guilty for avoiding the unknown outdoors by always being grateful for the opportunity to run – on or off the treadmill.”

» Featured, inspiration, Interviews » Complaining about running on a treadmill is the ‘epitome of a first world problem:’ Jacob...