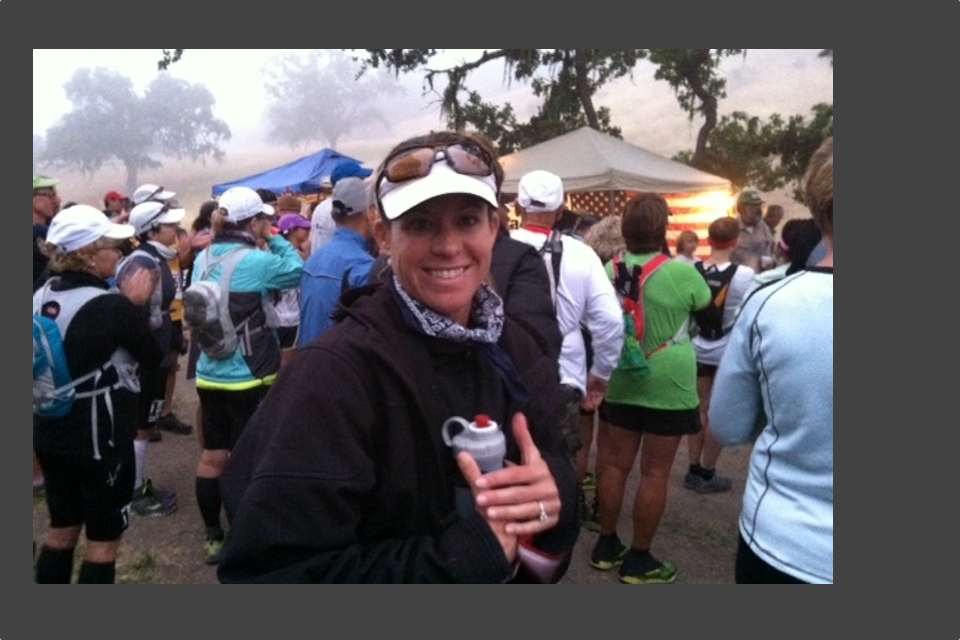 What a fantastic experience!  As with most races, there were some highs, some lows, and some just downright UGLY moments.  But, through it all, I got what I went for – a hard effort before Western States 100,  and a test of my fitness, fluid and nutrition plans, and my equipment – and had a fun trip to boot!

After my horrible night’s sleep on Thursday, Friday was a little stressful.  I was trying to finish up last minute prep, drive the kids to and from downtown, and pack the car, all before noon when Tim was arriving.  You never want to be trying to get out of Los Angeles late afternoon on Friday.

Heading out to packet pick-up, I got a good look at the terrain we would be running through (the farm is out there in the “hills”). Gulp.  Luis Escobar, the RD, had said the course “isn’t easy,” but I thought he was just trying to scare people a little (I hear he does that).  Okay, so there was going to be some climbing.  And descending.  Better practice for WS, right?

After packet pick-up, we headed back into Los Olivos for some wine and olive oil tasting, and a wonderful dinner at the Los Olivos Cafe (braised short ribs, asparagus, polenta fries, and a caramel brownie with ice cream) – it was delicious!  Then, we made our way to the Meadowlark Inn to get settled in for the night.  What a cute little place!

Before bed, I decided to take some Benadryl, as I had started to get that itchy throat/mouth thing out on the farm.  I didn’t want to wake up with full-blown asthma, so I was willing to risk being a little sluggish in the morning just to be safe.  Oddly, the Benadryl did not make me sleepy at all, and I spent another night tossing and turning, this time dreaming that Micah True (aka Caballo Blanco) had come to warn me not to run.  Good thing I only get spooked by animals!  Yikes!

Four a.m. – up and at ‘em – I downed a Cliff Bar, some milk, and some coffee.  We headed out to the race, and thankfully left with time to spare, because it was super foggy.  I tried not to think much about my ghostly warnings, but I have to admit that in the fog, I was a little creeped out.  All my fears were dispelled, though, when we arrived at the race.  Luis was decked out in full Mariachi regalia, blaring matching music over the PA system, and tending a crackling bonfire encircled by other sleepy runners.  Adding to this party atmosphere, was an open bar, complete with gallon-size bottles of Jack Daniels and tequila, on the main aid station table at the Start.  I decided at that point, no matter what happened, this was going to be a race I wouldn’t soon forget.

After some pre-race announcements (the course markings are fool-proof, no whining, no complaining, etc.), we all took the Micah True oath:

Pre-race briefing in the fog

After a real shotgun start, we were off.  The course consisted of 2 ten mile loops – the “pink” loop and the “yellow” loop.  For the 100k, each loop would be run 3 times, and then a one mile out and back would be done at the end.  The first loop (pink) was done under a layer of fog, which was cool to run in, but a little bit treacherous.  The terrain was very ruddy and full of big holes, so you really had to pay attention to where you were stepping.  As uncoordinated as I am, I made a point to keep my eyes on the ground.  Because of this attention, I did succeed in not falling on the first loop (yay!), but did manage to get lost

.  About halfway through the first loop, the front of the pack missed some fog-obscured markings, and the rest of us followed.  Luckily, we only got about 1/4 of a mile off track before someone realized our mistake.  Unfortunately, our 1/4 mile detour had been on a nice downhill, and now we had to trudge back uphill to get back on course!

Even though the first loop had a lot of climbing and descent, none of it was technical, so I was able to run all of it.  I knew things would probably change later, but I was happy when I came in at 1:40 – not too fast, not too slow.  After a quick bottle change, I headed out onto the “yellow” loop for miles 11-20.  At first, the yellow loop seemed much like the pink – climbing and descending, but runnable.  And then, it wasn’t.  At about mile 13, we start a big climb.  And we climbed.  And we climbed.  There was no running going on, that I could see, so I cooled my jets, and joined the crowd.  Up, up, up we went.  At the top, it leveled off, and then we descended again.  Good, I thought, back to up and down.  But the next thing I knew, the yellow flags were taking us off the regular trail and up the side of the mountain.  What?

Okay, time for single track – technical single track.  Climb, climb, climb some more.  Up to the top a ridge – gorgeous! – and then down.  And then up.  And then doooooowwwwwwnnnn.   And then one last climb and … Yikes!  Big descent!   And I bit it.  Of course.  But I wasn’t hurt, so I got back up and kept trying to get off the dang ridge.  This was going to be scary later in the day.  Finally, after another minor fall, I was back on regular rolling hills and running again.

As the day wore on, temperatures rose to into the mid-80s.  I was in the lead for the women, and third overall – I wasn’t sure if that was good or bad.  I needed to stay focused on what I was doing, and not on my standing.  I switched to my Nathan vest, as I could tell I was starting to get dehydrated (you know I sweat like a 300 lb man!).  Unfortunately, I was even less prepared for the heat in the food category, having only brought my “normal” race fuel of candy bars, and GUs for the last miles.  The candy worked until about mile 35, but with the heat, my stomach just refused to digest it.  I tried to take in more calories with soda and fruit, but I just kept getting further and further behind in calories.  By mile 45, I knew I was dehydrated and starting to bonk, so I forced a GU down, which I promptly threw right back up.  Hmmm… I gave a PayDay one last shot, but threw that up too.  Oh well, I knew I just had to keep moving and get this race done, one way or another.  The longer I was out there, the uglier it was going to get.  For the last 15 miles, I had a few sips of soda at the aid stations, and just tried to not push too far.  I was still in the lead, but without causing myself recovery issues after the race, I knew I couldn’t push any harder.

Just before the the big technical climb, second female, Tiffany Guerra, caught me.  She looked fresh as a daisy – strong and fluid.  I knew that I couldn’t put up any fight without really giving it my all, and even then, I don’t know if I could have really answered back.  So, instead, I decided to just get through the last climb and descent without falling again (which I did, yay!), and keep the end of the run steady.  My pride was a little bit injured – getting caught 5 miles before the Finish sucks – but if I was going to get beaten, I was glad it was by someone who looked so good!

Finally, the Finish appeared, and I made it in, and then remembered I still had to do the 1 mile out and back.  Agghhhh!  The guy at the end told me to “go out to the mannequin and back.” Okay, I took off on the pink loop again, swearing I would never run another trail race in my life, and came to a pink flag and a skeleton with a feather boa hanging from a tree  Hmmmm….was this the mannequin?  I started to turn around, but realized I hadn’t seen Tiffany.  Now, I know she was moving strong, but I don’t think she could have gained 2 miles on me in the last 6, or so, miles.  I turned back around and looked down the road.  No Tiffany. Dang.  Now what?  I sure as heck didn’t want to keep running if I didn’t have to, but a skeleton is not a mannequin, even with a feather boa.  But the guy HAD been drinking all afternoon, right?  Maybe he just called it a mannequin.  I started shuffling my way back down the pink loop, telling myself that if I didn’t see Tiffany heading back within the next 2 minutes, I would know I was supposed to turn around.  In about half a minute, she appeared, and I knew that the skeleton was not the turnaround.  On I went, up another hill, around the bend, around a fence, and there, lying sideways, was a true mannequin.  Thank goodness!

I finally made it across the Finish line in 12:24, Second Female, fourth overall.

I don’t know how many people were in the 100k in total, but it was sold out at the beginning, and by the end, there were only 21 Finishers.  I think the heat and the terrain just really took their toll on people this early in the season.

Overall, I was happy with the effort.  Things I will take away:

1.  I definitely need a better fueling/hydration plan for trails and heat.  Not having access to aid like I am used to on short-loop courses means I need to be WAY more prepared.

3.  Somehow, I have to get better on trails – I don’t think I will ever be good at them, but it would be nice not to have to walk down at the end.

4.  The Benadryl probably contributed to my dehydration.  I need to have a better alternative.

5.  Physically, I felt better than I thought.  I have no residual muscle, joint, or ligament soreness.  The climbing and descending didn’t beat me up.

6.  For the first time ever in a race, I experienced serious muscle cramping.  I’m attributing it to dehydration, but I need to look into that.

7.  I did not taper last week, and I’m already recovered, so I think I’m moving in the right direction with training.

8.  I still have to come up with a good sunscreen option.  I simply sweat too much for regular sunscreen, and I came home really sunburned.

9.  I will sacrifice my left arm to take a shower after a trail race.  Tim wanted to get back home Saturday night, so I just had to rinse off with a bottle of water and some wipeys and get in the car.  Yuck!

10.  If someone can teach me how not to puke up GU, I will be forever in your debt.

Thanks to Luis Escobar and his fantastic volunteers for one of the coolest experiences in my running career!

About the Author: Carilyn Johnson

One Response to Born to Run Ultra Marathon Race Report