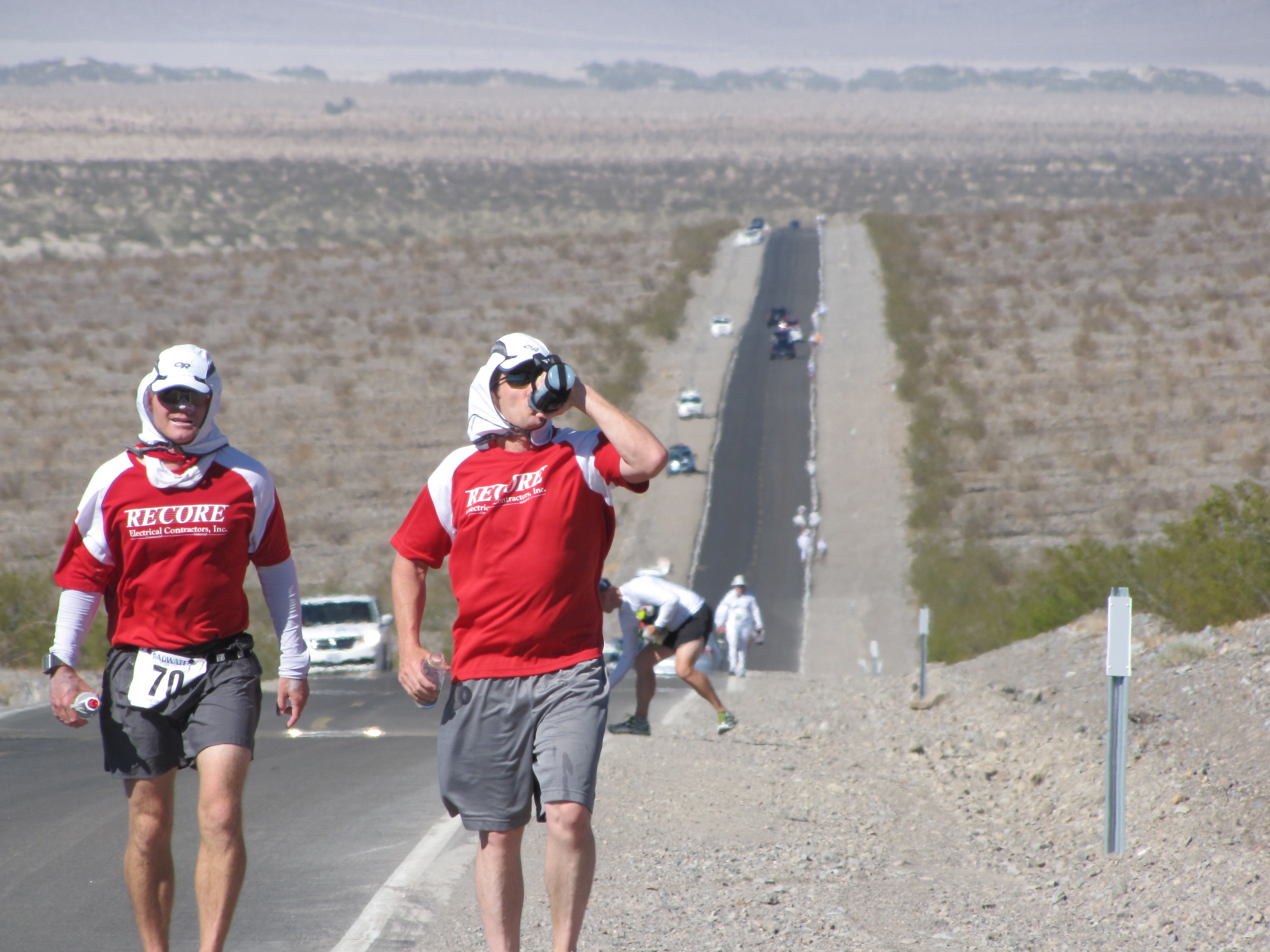 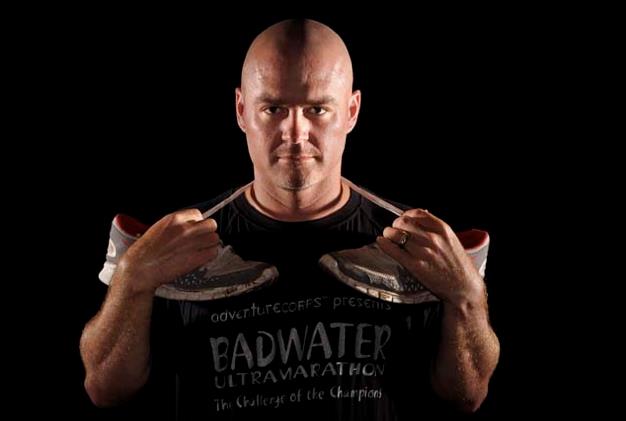 The Badwater 135 is considered by some to be the “toughest foot race” on the planet. Not everyone would agree…but I believe everyone would acknowledge that running 135 miles on asphalt, through Death Valley in 100-125 degree heat is no easy task. I’ve crewed and paced at Badwater twice. The race is unlike any other I have every participated in.  In large part, the consensus among those participating in this unique venue, includes the undeniable truth that Badwater is a “team race”.   The necessity for crew support and the cooperation of those volunteers in your van get you through this event. For that reason, Badwater is very special.

Very often, athletes spend several years preparing their resume for acceptance to Badwater. This includes crewing/pacing at the race itself. Also, many athletes run the  Brazil 135 or Arrowhead 135, both sister races to Badwater. In a way, Adventure Corps, creates a sect of ultrarunning all to themselves. Only those who prove loyalty, elgibility, and sincere philanthropic efforts are given the opportunity to run in the race. Like it or not, Badwater is exclusive for many reasons.

This week, I spoke with three-time Badwater finisher Brian Recore.

This year, Brian successfully finished Badwater in a personal record time of 32hrs 45 min. He shared some insight into his training and not-too-serious take on training and preparation for ultras.

Jerry: Tell me a little about you, as an athlete and otherwise. 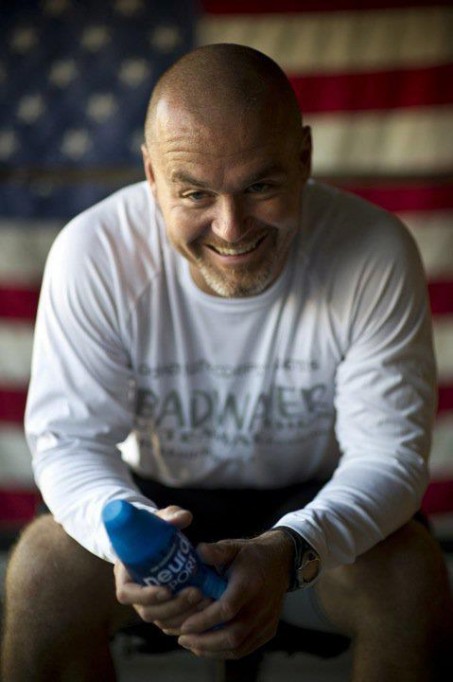 Brian: Well,I’m a systems engineer for VM Ware. I travel all over as a part of my job. I’m married and have two children.

Jerry: How did you first begin running ultras?

Brian: I ran my first road race in 1999. A few years later, in 2001, I ran the Honolulu Marathon. Ed Kelly (3,100 mile record holder) told me I would be good at ultras, so he suggested I run the Tahoe Triple Marathon. I did that…and now I’ve run about 37 ultras. My favorite distance is 100 miles. I can’t find any other way to push your body behond what is comprehensible…and keep going.

Jerry: That’s awesome…and what lead to consideration of running Badwater?

Brian: I read Dean’s book, Ultramarathon Man. Just the descriptions of Death Valley…with shoes melting. I just wanted to do it.

Wind is Dynamic at Badwater along with the Extreme Heat

Jerry: How did you end up qualifying and running Badwater?

Brian: I chose the fastest way I knew to get in the race. I crewed at Badwater a couple times and then I ran the Brazil 135. It helps…with the recommendation letters and the people involved in the races.

Jerry: It must be interesting being a traveling businessman and training for ultras. How do you do that?

Brian: I’ve run in a lot of places. I ran in Hawaii on the Hurt 100 course. I’ve also found myself running on business trips in Seattle, Norfolk, and South Carolina.

Jerry: Do you focus on weekly mileage or some other quantifiable effort for training?

Brian: I don’t run as many miles as others. When I’m traveling, it’s hard….it’s the “life of a salesman”. There is always a gathering at dinner,or drinks. I just adapt…but it is hard. I shoot for about 60 miles a week. When I’m pushing beyond that,it doesn’t seem fun any more.

Jerry: So, back to Badwater. You’ve run the race three times now.Each race was faster…what can you say about your training or methodology for these races in comparison to one another?

Brian: Well, my first race was 39 hours. I came back the second time and improved by 5 hours. I did more training and more miles. I also built a room around my treadmill.

Jerry: You did what?

Brian: (laughs) I built room around my treadmill at home and heated the room.

Jerry: What did you use?  A floor heater or something?

Brian: It was a propane heater, actually. It heated up the room to 120 degrees but I was inhaling propane.

Brian: (laughs) No,really…that simulated the heat in the race. It didn’t bother me that much. So this year, I had goal to run under 30 hours. My crew pushed me really hard.  In the last 20 miles, I had nothing left.

Jerry: For our readers who haven’t been to Badwater…share what makes this event special.

Brian: “Badwater is a team race.” It’s the crew that gets you through. 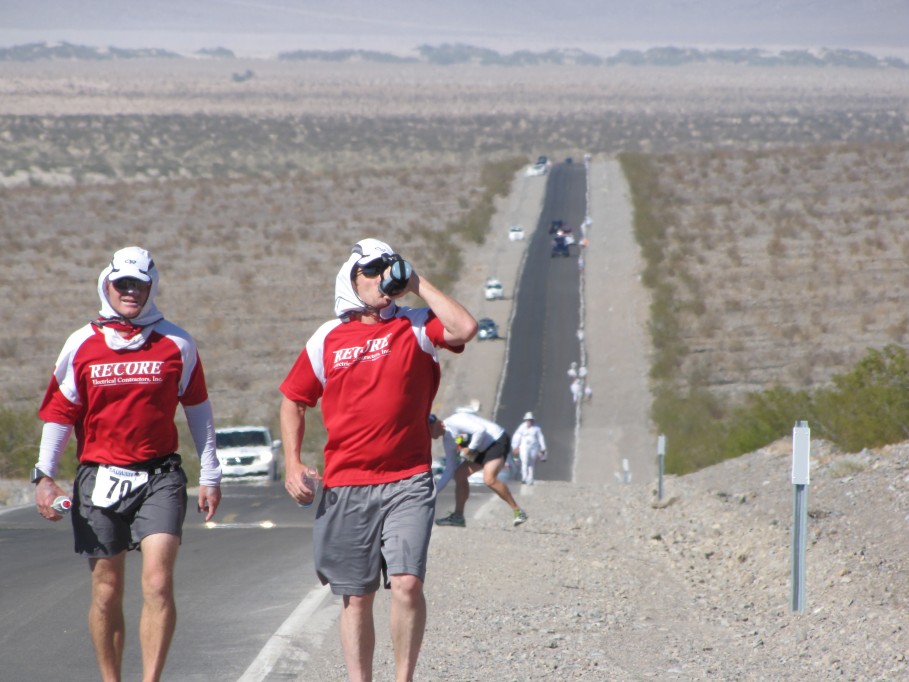 Jerry: Hey Brian, our website doesn’t just focus on elite runners. We have a section called, “High Five to the Regular Guy”.

Jerry: Sweet. What the hell is that?

Brian: Well, I won the Krispy Kreme Challenge in San Diego. I had to run 2 miles, eat 12 donuts, run another 2 miles, and then, to become the Donut Man, I ate 12 more donuts!

Jerry: Being the Donut Man, an inspirational figure known all over the world….What words of wisdom or advice do you have for runners preparing for their first ultra…or perhaps holding back from whatever race looms ahead in their running life?

Brian: Anyone can run Badwater…anyone can run these races. It’s just imagining it that makes it happen. Once you say, “I’ll put in the work”, you can do it. You gotta accept the impossible… if you say, “I can’t”, I say…that’s BS!

Brian Recore lives and trains in Southern California. He ran the 2012 Badwater 135 as a benefit to the Challenged Athletes Foundation. You can read more from Brian at his personal site HERE