When people think of getting out in the mountains around Jackson, Wyoming, what do they think about? The Tetons and the Wind River Range are typically the first 2 areas that come to mind. If you are driving north on Highway 89 to Jackson, you drive right past the Gros Ventre (pronounced Groh Vaunt) Wilderness. On numerous trips to Jackson to run or ski I have driven right past the Gros Ventre. It was finally time to check out this wilderness that I knew nothing about. After some time studying the topo maps I quickly realized there was a vast trail network with lots of climbing, rivers, lakes, and peaks. To top it all off, there is Granite Hot Springs at the south end of the wilderness. A bit more planning and I had a great 60-ish mile quick weekend fastpacking route planned out.

What is fastpacking? I backpacked for many years. Then, when starting to compete in ultramarathons I questioned why I would ever want to carry a heavy pack for several days when I could cover the same distance in 1 day. I quit backpacking for many years, but I was missing the nights under the stars and the ability to slow down and enjoy nature while still covering long miles. That is where fastpacking comes in. Fifty plus miles in three days with gear and food with a less than 15lb pack? That seems much more enjoyable. In my backpacking days, that seemed impossible but with recent advances in ultralight gear, this is now easily achievable.

On my never-ending quest for the perfect fastpack kit, I have been able to do 3-day trip with crampons and ice ax with a pack of <17 lbs. I am always looking for the next piece of gear to drop a few more ounces. As part of this trip, I would be testing out some of the Ultimate Direction fastpacking gear including the Deluge Pant and Shell, Fastpack 25 Pack, and the FK Bivy. 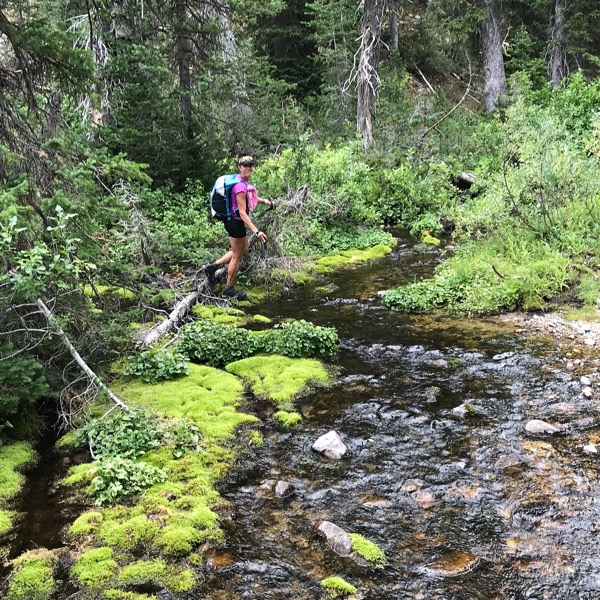 The weather forecast was great and excitement high as we left the trailhead on Friday. A long, hot climb through a burn eventually led us into alpine terrain and then to Shoal Lake for an amazing bivy site. The UD Fastpack 25 easily held all my gear. When trying to run with a full load of 15 lbs, the pack did bounce quite a bit. I have a CAMP Raid 20L pack that holds just as much gear and does not bounce as much when running. Overall, the pack was comfortable, but I found it hard to run in. 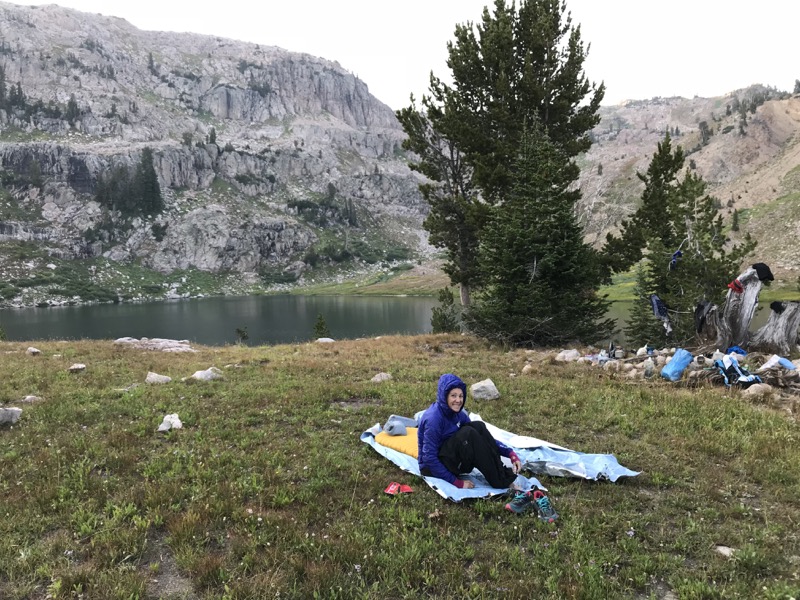 We woke to cold temps and wet shoes that had frozen overnight. Night 1 of testing the FK Bivy proved less than ideal for the conditions we were in. There was a significant amount of moisture that had developed between the sleeping bag and bivy. This meant packing a wet sleeping bag and having continual worries during the day if we would make it to camp in time to dry the sleeping bag. A quick cup of coffee and breakfast and we were on the trail for the first big climb of the day. The descent of the first climb was an indication of the day to come. As we got to more remote areas of the wilderness, the trail became more sporadic. We had the route plotted on GAIA, but for much of the day, the trails from the 1970s USGS topo map no longer existed. We were continually finding ourselves in large trail-less sections navigating by GPS. 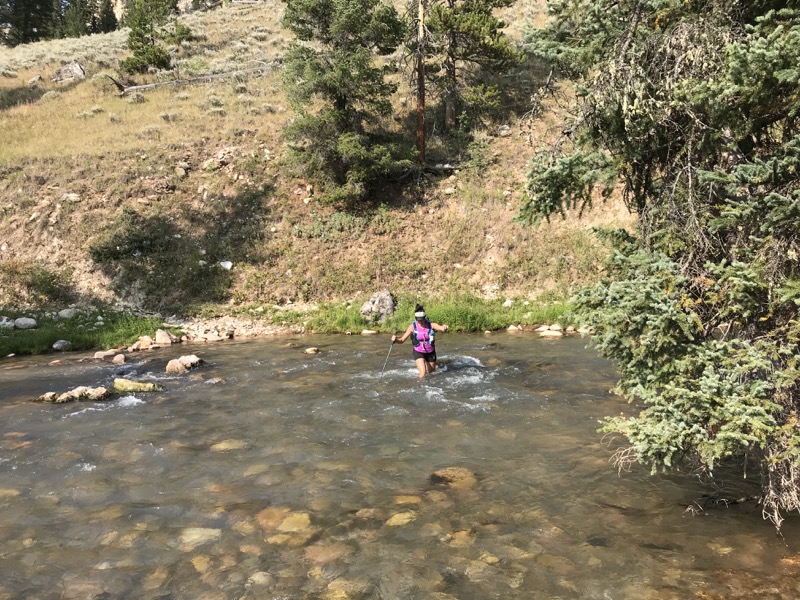 While trail-less excursions are typically enjoyable for me, we ran into some long trail-less sections without water which led to some stressful and thirsty sections that cast some doubt if we would find a trail again or have to start backtracking. We were continually amazed at the wilderness with its peaks, lakes, streams, and meadows – this place had everything, most importantly, it had nothing – no other people. When we were on a trail, there was rarely a footprint to be seen. After a few unintended detours (over 4 miles worth), we found a great bivy site on Crystal Creek for night 2.

As we hit the trail on Sunday morning, we immediately had to wade across the cold and deep Crystal Creek and then weather moved in with some fresh snow falling up high. We had a shortcut option following Crystal Creek south instead of climbing up and over to Granite Creek. This would reduce the day to 13 miles and 3000’ climbing. Based on the incoming weather and some concern of how much of the next section would be trail-less, we chose the shortcut. 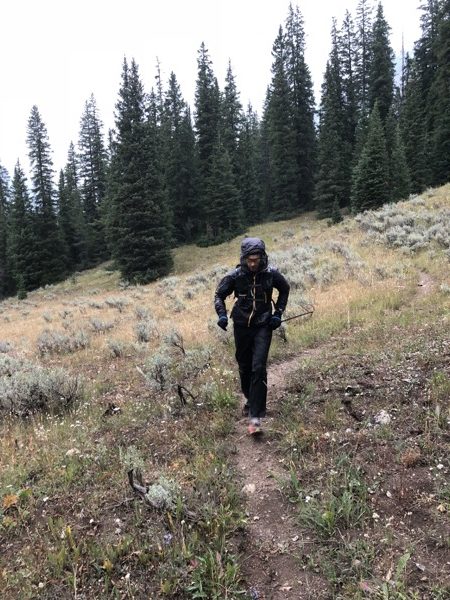 We were lucky in that the weather let up after a couple of hours. The Deluge pants and jacket were a perfect match for the wet and windy conditions. They breathed well, kept me cool enough to not sweat through them and did not get saturated through. 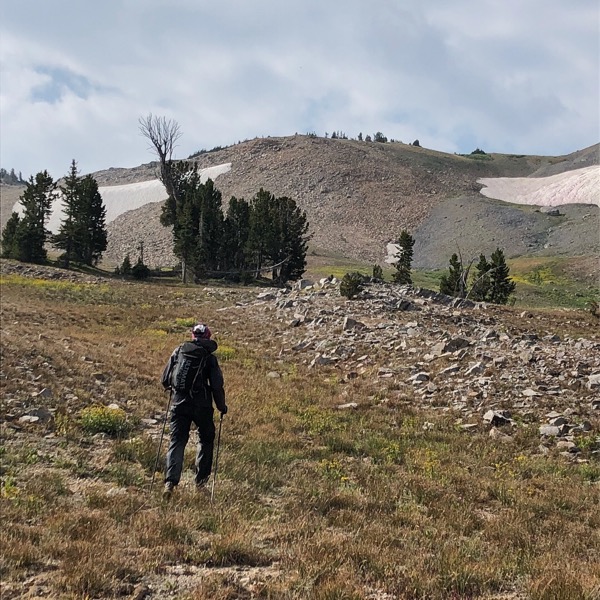 The weather eventually cleared and we enjoyed a long descent back to the trailhead. With 2 days less food in the pack, the Fastpack 25L carried very well without bouncing, We enjoyed the descent and the anticipation of a beer and hot springs soak when we reached the trailhead. While the Gros Ventre may not have the splendor of the Tetons or Winds, it is an amazing wilderness that gets you away from the crowds.