The Pacific Northwest: Finding Humility at the Waterfall

It is late morning on the Pacific Coast Trail—a sunny but cool day under the vast shade of the forest. We are in Oregon, a few miles away from the Bridge of the Gods, where the PCT crosses and continues past the Washington border. We’ve been on the trail all morning, and are now taking a break at Cascade Falls, less than a mile off the PCT. Apart from a lady taking pictures with an elaborate tripod and camera set up, we are all alone. Shacky throws a stick for Ginger while I soak my legs in the water and rub off the layers of dirt that cling to my calves.

Suddenly, I turn my head at a noise that sounds like a car. Huh? It can’t be. We’re on the PCT! But when I look up, I do indeed see a car inching its way up the trail. Although the dirt road is wide enough for a small car, it’s not a road that goes anywhere—it dead ends at the falls. I don’t even know where a car could have been coming from? These people must be very, very lost.

I mentally prepare to give some directions, but the car doesn’t stop. Nobody jumps out. They see the falls, the rocks, and the dead end, but they keep driving up to the water, spreading noise and fumes and blocking off the entire trail. What the hell are these people doing??

Then I understand—they’re trying to drive as close as possible to the falls so they can either see the view from their car, or walk as little as is humanly possible. On the final steep and rocky incline (for a car, anyway), they give up and park it. Out of the car stumble a trashy looking couple with their kid. I can’t believe they drove here.

The kid, about six years old, is in heaven. She runs right up to the falls and wants to play. The mother wanders off while the dad stands to the side and smokes a cigarette. They stay for about three minutes before calling the kid back to the car. After they leave, I am horrified to discover the dad’s discarded cigarette butts all along the water.

Most of the time, the people we meet on the trail are happy, respectful, and kind, but every once in a while we meet people who make me wonder if they deserve to be there. When the trails feel like home, I find myself feeling more protective of them and highly disgusted by those who aren’t respecting the land, or didn’t exert any effort to get there.

It used to be that you couldn’t see the views if you didn’t put in the miles or make the climb on your own two feet, but that’s not always the case in the modernized wilderness of today’s tourist hot spots. Sometimes I wonder about the balance between getting more people out in nature, and making it just a little too easy for them.

The douchey couple incident stayed with me for a few days, scratching on my brain like fingernails on a chalkboard. What the hell is wrong with people?? I huffed to myself as I ran up a hill. Those guys should not even be allowed in nature!

But then I thought about their young daughter, and the three minutes of joy she had playing at the base of that waterfall. I wonder if she’ll grow up to remember her fleeting moment as “that day we went hiking,” and seek out more days like it. Perhaps someday this trail will see her running through it, soaking her legs in the falls, and feeling protective of its beauty.

More importantly, who was I to judge who “deserved” to be on the trail? Was Trail Police really a job I was cut out for? It seemed to take my mind to a place I couldn’t enjoy—one of judgment, condescension, and perpetual annoyance.

A few days later, I was running alone up the Wahkeena Falls trail on the scenic Columbia River Gorge. We had already run that morning, but I couldn’t get enough of this place. Shacky was resting in the RV, so I started off with just Ginger. Before long, she was slowing down in the heat of the day and the perpetual climbs, so I took her back to the RV and started for the third time on my own.

The falls themselves are a short walk from the parking lot, up a paved “trail”. Most people just hike to the lookout for pictures, but if you continue up the trail, there are more lookouts and waterfalls as the road becomes significantly steeper, no longer paved, and more technical. That’s where I was heading.

After getting my miles in, I was bounding back down the switchbacks and hit the crowds at the waterfall again. Taking up most of the space was an extremely obese family of four. The two pre-teen children were huge, and their parents looked like they might roll away. I stopped to watch them more closely. Did they look like the kind of people who would leave junk food wrappers all over the trail, or flick a cigarette over the falls? Did they “deserve” to be there?

The longer I watched them, the bigger the smile grew on my face. They were elated. All of them were looking at the falls like it was the hidden wonder of the world. The kids shouted and laughed while the mom stuck her arm out for a selfie photo on her camera phone, her face beaming with gratitude.

I was polishing off a 50-mile week to get to this point, and these guys had just walked a few hundred feet, yet we were both in the same place. In the end, I had advanced no further and done no better. We were both on the same trail, both hot and sweaty, and both of us had gotten out of bed that day and put on our running shoes. Over food or comfort or television, we had both chosen the waterfall.

John Muir once wrote that nature should be explored by “anyone with the right manners of the wilderness,” and I think that sometimes the wilderness itself extracts that respect from us, whether or not we have experience giving it.

Oregon so far has been my favorite state to run in. I have been both humbled and exalted by its towering trees, lush forests, and clean air. The state motto reads: alis volant propriis. It means, She flies with her own wings.

What if we are all just flying the trails in our own time, with our own wings, in different stages of our relationship with the wilderness? Some of us are just starting out, while others are growing old on these trails.

That obese family may not have walked to many waterfalls, but they knew what to do in the presence of this one. Maybe their journey was just starting.

Maybe—in some way—we all deserve to be here. Or more likely, none of us deserve this. Yet day after day, by some great mercy, the sun still rises and the water still falls.

For all of us. 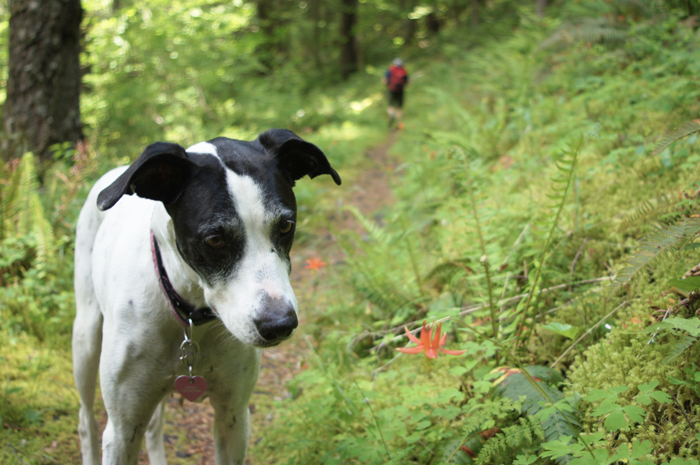 One Response to The Pacific Northwest: Finding Humility at the Waterfall