Book Review: The Summit Seeker: Memoirs of a Trail...

More and more I see posted on Facebook and Twitter stories of people who defied the odds, rose from the slums to achieve great success, or overcame all the ‘nay-sayers’ to accomplish the seemingly impossible. Videos pop up on You Tube almost daily that are meant to inspire. They have some guy with a deep, motivating voice, speaking some cryptic poem about greatness, all the while the video flashes images of sweaty people running roads in the predawn light or shedding 100 lbs as they workout in the gym, all because someone told them they couldn’t do it. I mean, I really love that stuff. I buy into it as much as the next guy. Unfortunately, in a world of mass media and over-stimulation it seems that the simple frequency of these stories has caused them to lose some luster, at least to me. And what about all of those successful people out there who accomplished greatness because they were raised in good homes, surrounded by loving families, friends, and coaches who believed in them and gave them ample opportunities to succeed. Are they not inspiring?

I wouldn’t go as far as to say I had a perfect childhood. I certainly wasn’t born with a silver spoon in my mouth and I definitely didn’t live in an environment that fostered greatness (in fact, it was a tiny army base in the middle of the desert few know exists). I was, however, surrounded parents and siblings who believed in me, coaches who saw more inside of me than I did in myself and friends who only wanted me to be as great as I dreamed. As I grew older and more independent I was able to accomplish more simply because of the confidence and self-reliance taught to me by those who loved and cared about me. When I turned into a runner, trail runner, and finally an ultra marathon runner it was because of the support of close friends and family who continued to foster my ridiculous ambitions that I continued to have success in my endeavors. Without them I would probably have just ended up another sad case of someone who underachieved instead of defied the odds.

When asked a couple of years ago how I was able to run 100 miles I finally gave what I thought was the most honest answer I could think of, “I just never told myself I couldn’t”. The more I reflect on my running career the more I’ve come to realize that everyone around me, those who really matter, also did the same thing. When I would tell them I wanted to run 100 miles there was never a response of “you can’t do that” or “that’s impossible”. Even when they often called me ‘crazy’ or told me what I did was ‘stupid’, it was always tongue-in-cheek and not meant to do anything other than produce a smile.

After attempting the Zion Traverse (48 miles, 8000 vert) with friends in 2011 and getting rained out I made the comment on the drive home that I wanted to try and run a double traverse – crossing all of Zion National Park  and then coming back. No one had ever tried it, and to my knowledge no one had ever even thought of it. When I brought it up in the car, of all six people there, not one of them told me it was a dumb idea or that I couldn’t pull it off. Instead, their immediate responses were of support and offers to help. A year later I returned to Zion to complete the first ever Zion Double Crossing in just under 27 hours. I can say in all honesty that I would NEVER have been able to pull that off without the support and encouragement of my family and close friends.

So here’s to those who have achieved greatness; not in spite of everyone, but because of them. In a running community as unique as ours, I believe that includes all of us. And while I will continue to stand in awe of those who were able to rise from nothing, with the world telling them it was impossible, I will also honor those who achieved great success because it was expected of them. I don’t know about everyone else, but this quote I came up with a month ago I think sums up my own life perfectly – “Some people are successful because they defied all those who said they COULDN’T. I’m successful because I lived up to everyone who said I COULD”.

Who has inspired or believed in you? Share your stories in our Comments section. 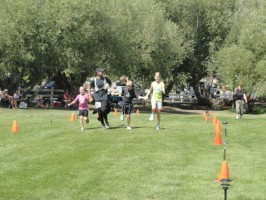 Scott Wesemann finishing his first 100, the Wasatch Front 100, with kids in tow

» High five to the regular guy, inspiration, Journey To A First Ultra, Musings, Training » Honoring Those Who Believe In Us

2 Responses to Honoring Those Who Believe In Us