The critical piece of gear that’s missing from your...

On Dec. 1, Altra Elite Athlete, Jacob Puzey hopped off the treadmill at The Running Event Trade Show in Orlando, Fl., and casually walked to his wife and 6-month-old daughter who were standing nearby. Had it not been for the swarms of spectators, you’d think that this guy was there for a casual fun run — not a 50 mile world record that he just so happened to smash exponentially.

Yes, the 34-year-old father of five shattered the 50 mile treadmill record by nearly an hour, finishing the distance in a blistering 4:57:45, averaging 5:56 per mile.

Puzey, who is an elite athlete and professional running coach, decided that he wanted to attempt to break the record, but he thought it would be close.

“I saw the record and did the math,” he said. “It looked like it could be achievable so I figured I’d have a go at it.”

While the plan was set in place, complete with the venue and support from family and sponsors, things did not begin exactly as expected.

“The run started a bit late with little fanfare as Jake had trouble getting a cab and getting over there and going,” recalled Altra Product Line Manager, Todd Falker. “We had to reserve two treadmills since they only run for 4-hours each, and he was planning a 6-hour run.”

Once things were settled, Puzey began his run, starting out at his 7-minute per mile goal pace. However, it was evident to him and those watching that this pace was not going to work, and off and away he went running below 6-minute mile pace.

“Even though it seemed foolish at the time, it actually felt better to run well below the pace than to try and run just below it,” Puzey said.

And according to Falker, once Puzey began to pick up the pace, it wasn’t long before he found that sweet spot where he could unfold his powerfully smooth stride.

At about a quarter of the way through, however, things came to an abrupt halt.

“About 12 miles in, there was a bit of pandemonium,” Falker said. “Jake jumped off the treadmill and sprinted to the bathroom, which was at least 100 meters roundtrip. But he was back in a flash ,and the pursuit continued.”

Puzey’s pursuit consisted of many consecutive mile splits in the 5:20’s, and soon people started to take notice.

“As the end came near, more and more folks surrounded the booth as they realized something special was about to happen,” Falker said. “That’s when I glanced at the treadmill and realized it was at 11 mph. Suddenly there’s only 5 miles to go and he’s on 4:59 pace. A crazy strong finish took a couple minutes more off that with several 5:23’s and 5:25’s to close it out.”

When it was all said and done, Puzey said that It was the many spectators, including his wife, Amy and daughter, Ashima that kept him going, and going fast. 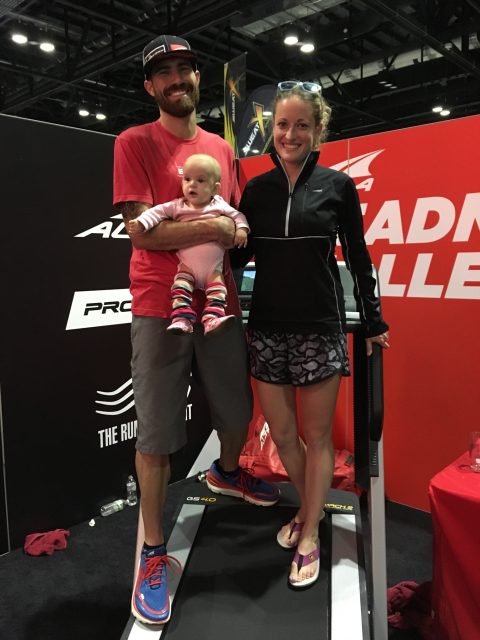 “I was fortunate to have a lot of people that I have met over the years as well as total strangers or people I only knew through social media stop by to encourage and chat with me,” Puzey said. “My wife, Amy also helped keep me motivated during the run with positive quotes, messages, and pictures. All of this broke up the monotony and kept me focused on doing what I had set out to do.”

While he did complete his world record goal by leaps and bounds, Puzey has not forgotten those who have helped him get where he is.

“I am grateful to my wife Amy who met me during a really hard time and has loved and supported me since day one and given me more hope than I had ever dreamed of,” he said. “I am grateful to my children for inspiring me to test myself and use the gifts I have to try and do something meaningful for them and for others. I am grateful to the team at Altra and ProForm (Brian Beckstead, Chris Jones, Colleen Logan, Mike McKnight, Jason Schlarb, Scott Carr, Todd Falker) who made the treadmill challenge possible and gave me the opportunity to test myself. I am grateful for the countless friends and supporters at the expo who went out of their ways to stop by the booth and encourage me. I am grateful for my other sponsors (Epic Provisions, First Endurance, Nathan, Strava, Swiftwick, and Trail Butter) who have stood by me when things have gone well and when things have not gone as well. I am grateful that my body held up and that I was able to spend the next few days in Florida with Amy and Ashima.”

As far as what is next? Well, Puzey says his goal is to recover, prepare for the holidays with his family, make sure his kids know how much he loves them and help his wife prepare for her next goal race. 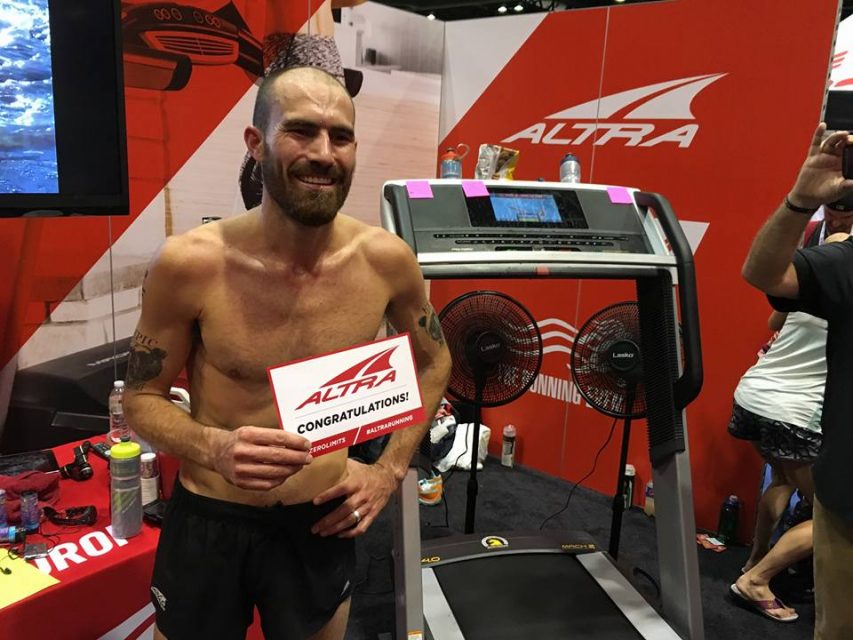