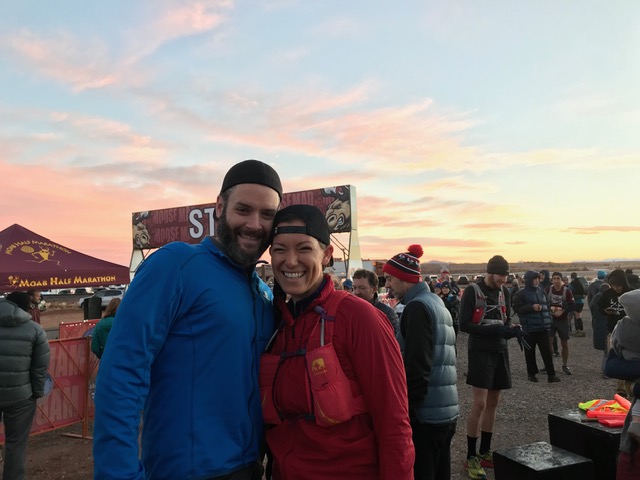 I stood at the starting line of my first 50k race with a strange calm in my chest. I thought I’d be nervous, shaking. Even with the chill in the morning air, the only tremble was the long-term nerve tremor in my right hand, but I was… just happy. I curiously observed the sea of runners around me. I could tell that many were newbies to ultra running- double checking their packs, or toeing the red Moab dirt, just wishing the ten second countdown would start already. I was ready. I’d been counting down to this starting line since I had signed up for my first 50k, more than four years prior.

In 2014, just as I had been settling into ultra training for a November race, I injured my right ankle in an unlikely bouldering incident. I hopped down from the rock face and my tibia (leg bone) went through my talus (ankle bone), shattering it into 10-15 pieces. 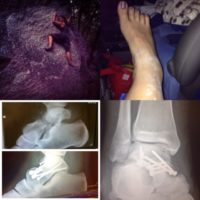 The trauma doc who pieced me back together with hardware and bone grafts gave me little hope of ever running again. “Don’t plan on it. As long as the bone lives, you’ll be extremely lucky to be able to walk on it again.” Trail running would be a pipe dream. I followed the healing protocol to the letter. 12 weeks non-weight-bearing. Slow reintroduction to bearing weight. Then, I called a physical therapist for a consult. I had to try.

Brian- an experienced physical therapist, gently palpated the long, bumpy surgery scars that ran across the inside and outside of my ankle. He measured the range of motion in both ankles, and studied my x-rays. Then he spoke the words I had hardly hoped to hear. “I think we can get you running mountains again.” I won’t lie. I sobbed. I showed up at therapy three times a week, ready to work. Four months and one week after the break, I walk/ran a Thanksgiving 5k. My surgeon’s jaw hit the floor when I told him. Four months after the 5k, I ran a 25k on Antelope Island.

One week after the 25k, I found myself writhing in pain, begging for a doctor. After a battery of tests, I got a phone call. I had a kidney stone, but there was more than one thing wrong. Very wrong. Lithotripsy first, then MRI, then surgery. My life was at stake, but they were going to save it. The week of surgery, I chopped all my hair off in defiance of … anything, and with doctor’s approval, went on one more run. I screamed in frustration, cancelled my race entry, and tried to accept having to start over. Surgery didn’t go as planned, and I came out of it dazed and traumatized, with new scars across my abdomen. A portion of my former self, but alive. My friends walked me out, an achingly slow half a mile at a time. I couldn’t cough or laugh, and running seemed like a far off fantasy. Six weeks of mostly bedrest later, I was back at it. More grateful for every outing. More in love with the fact that I could still hike mountains. I gave myself 6 more months to heal and signed up for my first 50k… again. February 20, 2016 was it. Nothing could stop me now. 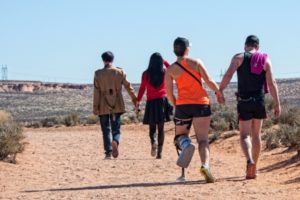 January 6th, 2016. We had a new job and a house to sell. I was 16 feet up, painting a wall when the ladder slid out from under me. Slow motion. My arm caught on the wall and my shoulder tore. The ladder flipped, but I somehow landed on my feet. The problem was, I landed on the side of my left foot. I knew the feeling of broken bones well. That shockwave hit me hard and I just knew. I laid on my back in a puddle of paint and frantically cried, ”I can’t do this again! I can’t!!” The x-rays and CT scans confirmed it. Four breaks in my left foot. 6-8 weeks non-weight-bearing. I tried to stay positive. Truth is, by the time those weeks were over, I was falling apart.

I didn’t sign up for another race. I didn’t jump back into training. I hiked for my sanity, and ran when I felt like it. And I sank. PTSD, Depression, Anxiety. I didn’t want to try anymore. Eventually it became apparent that I needed  professional help. My therapist and my yoga teacher became lifelines. My physical function and my brain function were suffering too. I was falling over. Forgetting how to get home. Losing my coordination, my memory, and my reading ability. I saw doctors and did what I could for my body and brain, but I was in full crisis mode. It took over 8 months to figure out that I had severe copper toxicity- poisoning of my entire body, stemming from my earlier health issues. I searched for doctors who knew what to do for my rare condition, and had a year of treatment in which my symptoms worsened before improving. I never stopped my slow sanity miles in the mountains, but I had pretty much given up my ultra running dreams.

Then one quiet evening in winter, I felt something I hadn’t in years. I felt brave. I signed up to run The Dead Horse 50k in November of 2018. I was afraid to tell a soul, lest I jinx it. I was not afraid to run. I knew if I could just make it to the starting line, that race would be doable. I had more mental training in suffering than I could ever have asked for. I just needed to train. I didn’t dive in headlong. I trained gently, mindfully. I increased my mileage slowly, cross training with yoga and weights. I built a rock solid fitness base that I knew would serve me well, and I waited. Eventually I told friends what I had gotten myself into, and they- like the stalwart heroes they are, signed up to run it with me.

As I stood in the cool November air, gazing out at the red rock cliffs, I didn’t need anything else. I had made it to the starting line uninjured, and whole enough from body to soul. The starting countdown began, and I grinned from ear to ear. I was ready for a victory run with my friends. The miles were hard, but not nearly as difficult as anticipated. My fitness was there, and my mental game was unshakeable. We laughed, we danced, we sang the miles away, so grateful for every minute out on the desert trail with each other. I went out there prepared to take a full  ten hours to finish, and when we crossed the finish line in lock step at 8:09, with more friends cheering our names, it might as well have been first place.

This is my story, but everybody has stories. Difficulties we’ve overcome, people we’ve lost, a running tally of the times we’ve given up and had to start again. My hope is that sharing my story gives you permission to own yours- past, present, and future. I am forever grateful for my monumental struggles. They caused me to work harder and more deliberately. They forced me to step back and take the time to do things right. In short, they have made me. There is no bravery without fear. There is no comeback without setbacks. There is no victory without defeat. As the yogis say: No mud, no lotus. 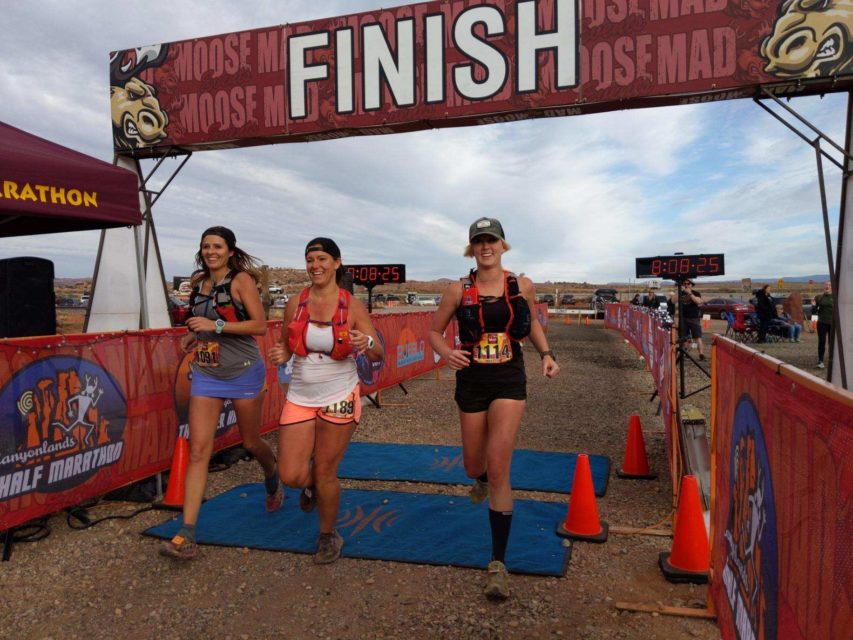 » Community, Featured, inspiration, Journey To A First Ultra, Writers » The Advantage in Setbacks: A Story About Winning