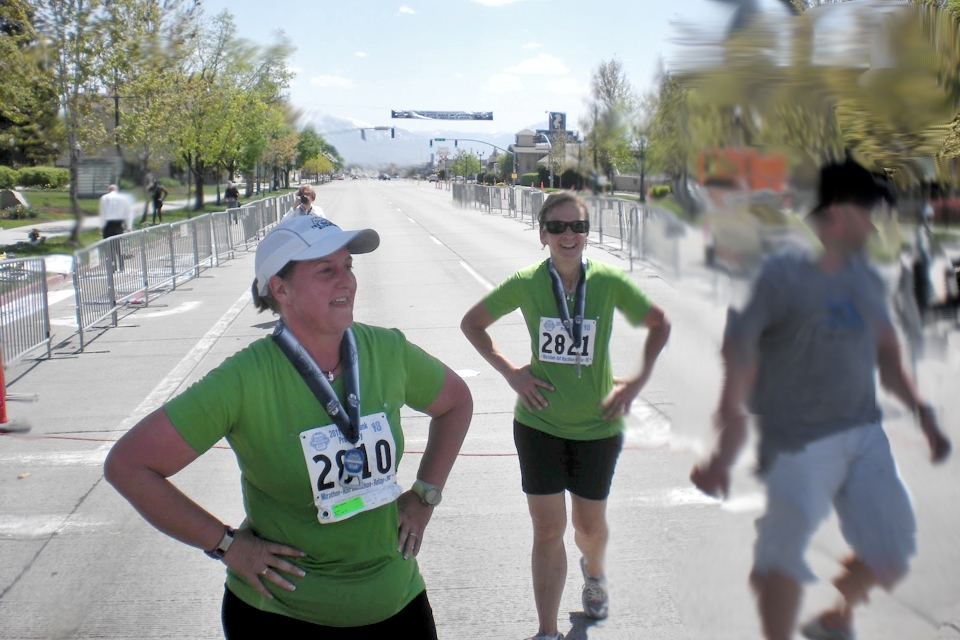 I hear the following excuses all too often:
“It’s just so difficult”.
“Ugh, I get so bored, I just can’t stand it”.
“I can’t stand getting that gross and sweaty”.
“I don’t like feeling sore”.

I could go on, but I think we’ve all heard or used some form of the phrases listed above. I’ll be the first to admit that I’ve used at least one of them in the past. For 36 years I was more than happy to claim that I didn’t like running even though I would try it from time to time. The excuse I used most often was, “I’m a great runner, but only if someone is chasing me. Other than that I hate it”. I look back now and realize how stupid it was of me to say something that naive and ignorant. What it boiled down to is that I never stuck with it long enough for it to get interesting. And that’s where most people get stuck.   There is that imaginary wall of effort that they are neither willing to recognize nor go over.   For some, that wall is three miles, for others it is merely getting out the front door. Yet all of us, whether we are trying to become a runner, an entrepreneur, or anything else we can dream of, must be willing to push through some discomfort, even pain, if necessary, to accomplish our goals.

To quote my friend and TAUR editor Matt Williams:
“You should sweat. It should hurt. You should even feel like you might die at any moment. If you want to get better then you need to accept the fact that it is going to hurt like hell”.

If you can’t answer that it was sometime in the last two weeks, you probably aren’t trying hard enough. For me it was three days ago. I was running a 16 miler with 4000 feet of climbing. The last seven miles are downhill and we were pushing the pace at the edge of  my comfort. With a half mile to go I was low on energy and tired from a tough week of running. With a quarter mile left my running partner and I pushed it into overdrive and sprinted to the finish. We both were yelling in pain and nearly collapsed as we finished the run. It was that last effort that solidified the satisfaction I took away from the run.

My favorite picture taken of me was the moment I hit the sign and finished the first ever Zion Double Crossing – 96 miles and 20,000 of vertical climbing. I had given everything I had in those 27 hours and literally couldn’t have pushed any harder at the end. The elation of knowing I did my best was the biggest take-away for me and has mentally opened a ton of doors as to what I can accomplish.

‘Effort’ is a very personal word. We each gauge our own effort differently.   I’ve often been out running or climbing with people and been disappointed in what I thought was them giving less than their best effort, only to find through their own admission that they were at their absolute limit.   I generally expect the people around me to give their best because I am giving mine, even if they don’t perform at the same level.   However, I also tend to wear my effort on my sleeve and it is generally obvious to everyone that I am at my limit, whereas other people have an innate ability to contain or hide it better.   I’ve learned not to judge those around me any more, but I do hope that they see the importance of giving more than they are able, at times.

Note that I haven’t said that everyone needs to do it all of the time.   Others would argue that, but I think it’s important to allow yourself a mental and physical break.   My general rule on a per week basis is, if one were to run 5 days a week: 1 day medium effort, 3 days hard effort, 1 day all out – leave nothing on the table – effort.   Like my previous post I believe this has a ton of crossover.   I don’t believe this only applies to running.   It can apply to any aspect of your life, including your job.   But applying these basic principles will help you realize that you have a lot more to give than you ever thought you could, you just have to be willing to push yourself farther than you ever have before.   Most often, our own limits are put on us by ourselves, rarely by others.

After a long run or after I go a few weeks without climbing I tend to have a tough time getting back into the swing of putting forth my hardest effort.   I forget what it’s like to try hard, how much it hurts, and the satisfaction that goes along with pushing through it.   It takes that one time when I’m willing to step it up and push harder than I thought I could that I realize I have much more in me than I was giving.   Once I break through that barrier I can then repeat it without even thinking about it, but that first time requires a conscious effort.   And that is where people tend to get stuck.   They simply don’t know that they can give more effort and don’t try.   Luckily, for a few people, they are surrounded by others who know how to solicit that kind of effort, but they are the minority.   For most people it is a deeply personal, yet conscious internal interaction that requires a choice, the choice to continue through the pain or heartache or uncertainty.   But once done whole new vistas of what we can accomplished are opened and we begin to see that we are capable of so much more than we’ve ever done before.

» inspiration, Musings, Training » No Excuses – What Are Your Excuses – Part Two

2 Responses to No Excuses – What Are Your Excuses – Part Two