Kilian Jornet puts it best when he says “Zegama is Zegama”
ANNECY, FRANCE — As a curtain-opener it’s hard to imagine a better event to start the inaugural Golden Trail Series. The Basque town of Zegama is a mythical location in trail running – home to perhaps the greatest mountain marathon of them all, Zegama-Aizkorri.

This year’s race – the 17th edition – will witness perhaps the deepest and most eclectic field ever, with athletes from every continent descending on Zegama, no doubt attracted by the revolutionary Golden Trail Series concept. The men’s and women’s side of the draw is a who’s who of the best trail running athletes on the planet.

Reigning men’s champion and course record holder Stian Angermund-Vik returns to defend his crown, but he’ll face stiff competition from amazing runners like Remi Bonnet, Max King, Marc Lauenstein, Sage Canaday and Nicolas Martin. The women’s race, meanwhile, is too tough to call with previous champions, new talents and icons of the sport all represented on the start line.

On the women’s side, Emelie Forsberg and Yngvild Kaspersen will each be looking for their second win at Zegama, and will be joined on the start line by legends such as Colorado’s Megan Kimmel, New Zealander Ruth Croft, National Geographic Adventurer of the Year Mira Rai from Nepal, World Mountain Running Champion Silvia Rampazzo and SkyRunning Champion Sheila Aviles.

What makes Zegama such a magical race is the incredible atmosphere created by the greatest fans in trail running. The Zegama crowd are the sport’s most passionate and with this year’s lineup expect the excitement to go stratospheric. The Santo Espiritu climb after 20km is the race’s crux – a place where champions are made and challenges die in the mud. There’s no better spectacle in the sport than the athletes power hiking the ascent, gasping for air through a tunnel of crazy spectators – a cacophony of cheers, song and shouts. For last year’s winner Stian Angermund-Vik, it exceeded all expectations. 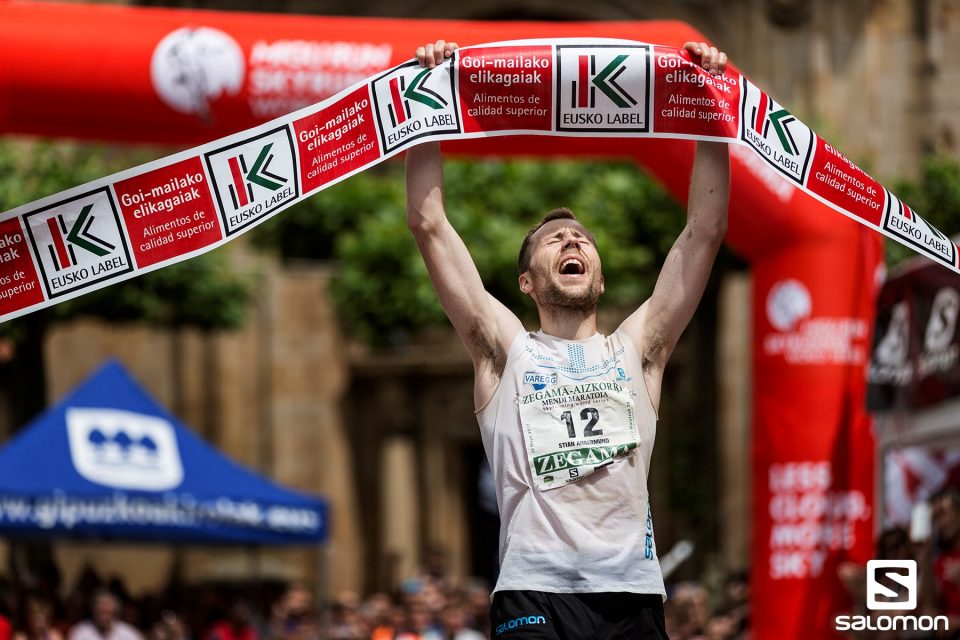 “It has the best spectators I have seen,” said the Norwegian. “Last year was my first year in Zegama. The atmosphere was better than I could imagine. I’m smiling when I think about it. It was fun to win last year, but enjoying the atmosphere in the course was even more fun. To me, Zegama is not about winning, it’s about having a fantastic run in the mountains.”

The Golden Trail Series combines five of the most iconic short-distance trail races on the planet into a dream tour for both athletes and fans. The Golden Trail Series tears up the rule book on prize-money, as the mammoth €100,000 prize pool will be shared equally among the overall top 10 men & women at a lavish Grand Final at the Otter Trail in South Africa. Each of the top 10 will travel with a friend or partner of their choice for a trip of a lifetime to compete for their chosen cause or charity.

For photos and more, visit www.goldentrailseries.com

To watch/follow the race online on May 27, visit these Salomon’s social media channels:

Born in the French Alps in 1947, Salomon is committed to pushing the boundaries of mountain sports through the creation of innovative equipment that allows people to play, progress and challenge themselves in their chosen outdoor sports. The company produces and sells premium footwear, winter sports and mountaineering equipment, hiking equipment, and apparel specifically designed for all of those disciplines. Products are developed in the company’s Annecy Design Center, where engineers, designers and athletes collaborate to create innovative solutions that continually improve the outdoor experiences of those who see nature as a vast playground.

All photos credited to Jordi Saragossa