Syndication of Conversations with the Trail

Range of Motion to broadcast Born to Run event 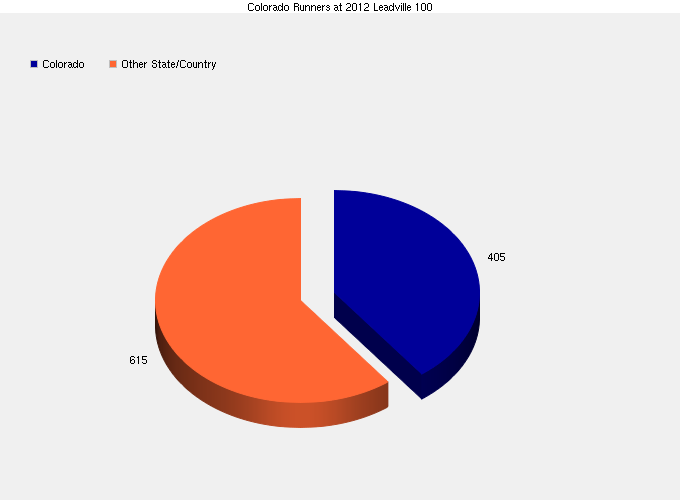 The 2012 Leadville Trail 100 mile ultramarathon is set to kick-off in about a week. On August 18th at 4am, a rather large group of runners will begin their epic journey from the historical mining town of Leadville, CO. The small town of Leadville sits at a modest 10,200ft altitude.  Using the race roster, as published by the race organizers, I extracted some simple statistics and placed them in some visual charts/graphs. I made every effort to be as accurate as possible in doing this. I would argue that these are ‘approximate’ statistics, which are only as accurate as the roster itself.  I started this effort with grand idea of checking every athlete with respect to their past ultra experience, to include whether they had successfully finished a 100 miler prior. Honestly, I was quickly overwhelmed in this process due to fact that there were just too many runners and not enough time. Even the simple data displayed below took me several days to accumulate. I hope you enjoy this statistical look at the 2012 race.

According to the race roster, as uploaded and published by Leadville Race Series, there are approximately 1,020 runners registered for the 2012 Leadville Trail 100. Of those runners, I identified approximately 152 female runners and 868 male runners. This provides an approximate ratio of (85%) male to (15%) female runners in this year’s race. I am not able to accurately calculate or predict the numbers of athletes that will not start the race, despite being currently registered. It is long established that many athletes will not toe the line due to injury, illness, or other individual reasons.

The race roster also identified the state or country athletes registered from. Making our best effort to identify these locations with the two character coding, I was able to gather the following information:

The most represented US state in the race is Colorado with approximately 405 registered athletes. This is about 40% of the total field. 4 of every 10 runners in the race is from Colorado.

I made an attempt at counting how many athletes were from each state or country. This, too, was extremely time consuming. Besides the most represented state of Colorado, I found that Texas and California appeared to be substantially represented, although their contingency was still less than 50 athletes each. The following graph displays several of the larger states, from which athletes are traveling from. I was personally surprised by the lack of representation from Utah (17 runners), our neighboring mountain state with a significant ultrarunning subculture.

This graph also illustrates the small number of international athletes. There are athletes from as far away as Singapore and Europe. And, as expected, there are small numbes of athletes from almost every other state in our union. 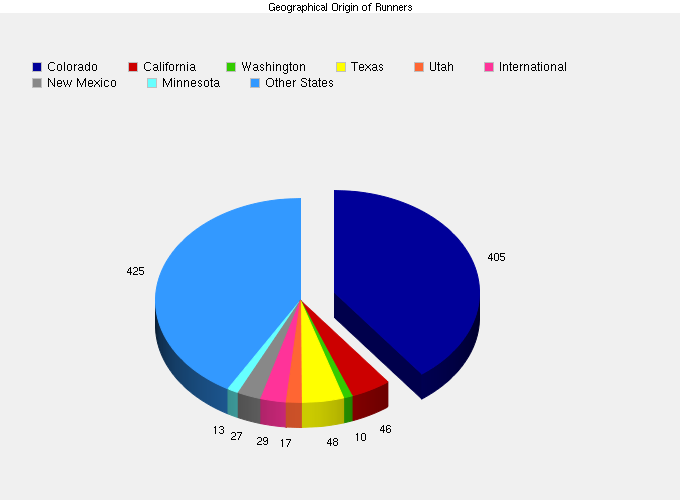 Based on past years, it is accurately estimated that at least 50% of the athletes who start the race will not finish the 100 miles. In this case, we are referring to over 500 runners who will DNF this year.  Contributing to this high DNF (Did Not Finish) rate is the lack of any required prerequisite 50 mile race. Athletes need only pay their $275 to be put on the start list for this challenging 100 miler.As a competitor in this year’s race, I can only hope that my training and experience set me up for success despite these dismal figures.

On behalf of Trail and Ultrarunning, good luck to all who have decided to run the ‘Race Across the Sky’. Regardless of the outcome of your personal event, we hope you are inspired by the moment at hand…surrounded by ultrarunning history in a mountain town born so long ago.  May you be light on your feet, full of unexpected energy, and discover untapped strength from deep inside your soul. As race co-founder Ken Chlouber says, “You are better than you think you are, and you can do more than you think you can.”