When the snow kills your skin

This years running of the Red Hot 55K/33K was quite competitive and I had many friends who had great days out on the course. My day was not quite as fortunate. I can’t say it was a bad day, but it wasn’t what I was hoping for.

To be honest, I don’t know what I expected on the day – I was at least hoping that I would be able to move smoothly and comfortably across the slick rock trails of Moab, UT. While running with the likes of Joe Grant, Karl Meltzer and Luke Nelson and just getting back to training after 2 months of injury, I also had no expectations of coming close to the top times. With no expectations it’s hard to say that I could have felt let down, but oddly I did.

The race started out like most all other ultra marathons, a quick countdown from the RD sent the group on its way. Quickly, the front group, led by Zeke Teirnan and Alex Nichols, built a gap with a chase group that included Joe Grant, Luke Nelson, Karl Meltzer and Mike Foote not very far behind. The lead ladies were right behind them. It stayed that way for the first handful of miles until runners were faced with the climbs that separated those who were having a good day and those who weren’t quite on top of their game.

Joe Grant was having flu-like symptoms and throwing up slowed him down a little. Luke Nelson was admittedly just not on his game that day and although he finished well above the capabilities of most, it wasn’t where he was hoping. Karl was just running like Karl. Speaking to him before the race, he was shooting for a 4:40 finish time and just looking to go out and have a fun time. And that’s exactly where raced all day. 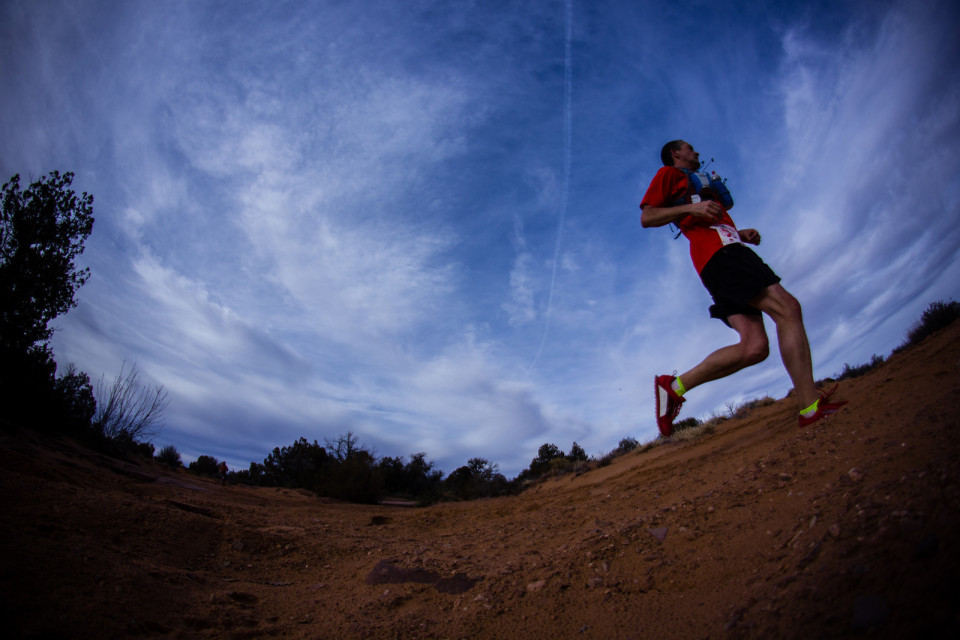 Alex Nichols (5th place TNF Championships and 2 2nd place Pikes Peak Marathon finishes) had a stellar day. Not great enough to take the CR away from Rob Krar, but a great race none the less that won him the overall 55k event. Paul Hamilton and Mike Foote followed respectively after Alex. Jodee Adams-Moore was the female winner with professional Darcy Africa just missing the podium for 4th place. I was a little busy trying to survive my own race to see how it all played out, but the story told is that it was a great push all the way to the finish.

The 33k also had a great showing. Justin Ricks, Red Hot 55k/33k RD, took the top podium spot and broke his own record set last year. It was super exciting to see Geoff Roes in his first race back since medical concerns sidelined him from racing almost 2 years ago. He maintained a strong push for the day but nothing that seemed to be at a podium racing speed. Short distance specialist Megan Kimmel raced a tough finish and top podium spot for the overall females.

The course was amazingly beautiful and equally impressive in difficulty. About 34 miles of beautiful Moab red rock desert, slick rock, Jeep trails and dusty dried up river bottoms were on the docket for the day. Clouds kept the temps in the high 60’s and the sun from beating down its energy stealing rays as runners started up the Gemini Bridges TH. After a few miles, we made our way up to the ridge where we could see the start line from 500 feet up. It was a sobering thought to know that in less than 10 miles you were able to make your way up to the ridge that looked so grandiose just 2 hours before. Overlooking the Canyonlands National Park was a real treat while running the ridge and back to Gold Bar, where the real climbing started to take place. Luckily, glimpses of the La Salle Mountain range were enough to keep you motivated and captivated by the beauty that Moab has to offer. After 1,000 ft of climbing to the ridge line multiple times in just about 4 miles, the legs really started to burn out.

Then comes the fun part – If you saved up your legs, then you were able to pull a Karl Meltzer and bomb down the technical slick rock with ease, which makes me glad I wasn’t able to push hard for that middle section and forced to take his advice of saving it up to the end. Really, you couldn’t have asked for a better course or better day.

What did get me though were a few rookie mistakes that were enough have me running scared for a few hours. I felt just fine in the first 8 miles or so, then the climbs started coming. My legs were perfectly capable of moving my body up to the top, but every time I started to push my heart rate up I was getting odd chest pains. Now, I’m all about refusing to quit and not ever wanting a DNF on my list, but I’m also not reckless. Chest pains are never anything to mess with.  Having never had them before, I went into safety mode and just went into cruise control.

Thanks to my medical background I was quickly able to diagnose that I was hyponatremic and a few salt pills over the course of the next hour and half helped subside the concerns and I was able to push the last 5 miles pretty hard (easy to do when you’ve been saving up all day). Like I always tell myself: slow days are physical, bad days are mental. I felt great and got to run with some amazing friends and top tier talent so it definitely wasn’t a “bad day”. 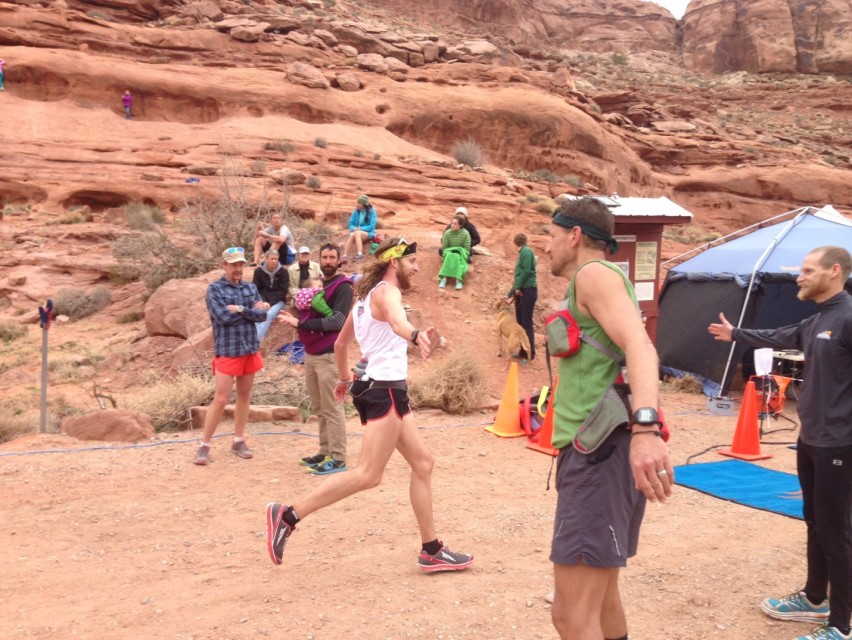 Overall, this is one of the greatest 50k race events I’ve been to. The directors did a top notch job. The community support and aid stations were amazing. The course was challenging AND completely beautiful. In my mind, Moab really doesn’t get the recognition it deserves as a legitimate mountain running town. The competition was fierce and it’s no wonder this race is known as the preseason showdown. This was my first year to the race and you can bet I’ll be back every chance I get, if nothing else than to see how my “off season” training has gone and to mingle with elite level competition.