Ultrarunning to Death at the North Fork 50 Mile 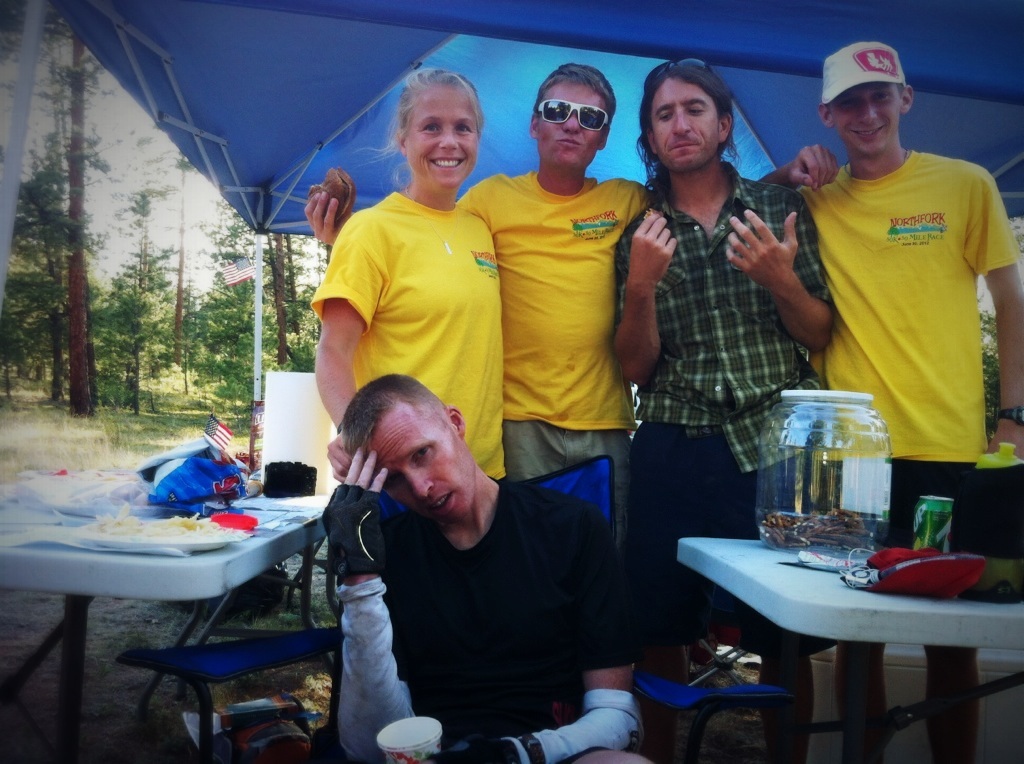 This isn’t your standard race report.  What I want to share is much more important and insightful than any surface-level description of a trail race. This is a thank you to the kind people that helped me stand on my feet and finish this event.  In all honesty, I had a terrible race this past weekend at the North Fork 50 mile.   Despite the fact I was running my 27th ultra, I found myself in depths of physiological despair around mile 43. It was about that point, I stopped walking, dropped to my knees and rolled on my back. My breathing was rapid and audible. My vision was blurred. There was no energy in my body left to move forward.   I knew I had to rest before continuing to the last aid station. I put myself in this position because I ran too hard for too long, period. 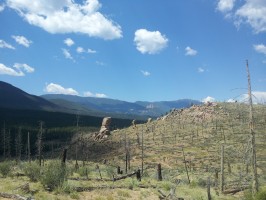 I heard other runners approaching me and they asked me if I was OK. I first gave a “thumbs up” in an attempt to respond with something positive. I still believed I could continue forward after a short rest. I climbed to my feet and trudged along the trail. Anonymous athletes that had been on the trail with me mumbled words of encouragement as they courageously fought their own battle. My stomach turned and I fought my reflex to crawl into the fetal position.

I tried again, with one last effort to move forward and let go of whatever demons had me by their reigns.  I made it about 40ft and felt my body stop once again. This was it, I thought. I was so dehydrated; I had no more energy to walk. My only hope was to lie on my back in the shade for a more significant period of time. God! I just need water! The warm salty electrolyte drink in my bottle made me increasingly nauseated with every inch I held it closer to my lips. An emotional volcano erupted deep inside my lifeless body…”F#&K! Why did you run so fast? Now you’re screwed…Some front-runner you are! Some coach! What a poser.”

I gave up. I laid there motionless in the dirt… my arms wide open to the sky. My eyes were closed. The sun seared my face and neck. I was helpless, pathetic, and incapable of protecting myself. Several large ants crawled on my arms and moved inside my arm sleeves. They bit my skin, and I could not find the strength to swat them. A silhouetted runner stood over me, asked me if I needed help. With dry lips and a desperate whisper, I asked for water. He poured water in my mouth and I laid my head back on the dirt. I thanked him but my words weren’t audible. Soon thereafter, another runner approached and seemed to know me. It was Todd Duncan. We had run together once before. Todd kneeled and poured water from his camelback. I didn’t move.

After an unknown amount of time, I heard a voice from up-trail.  A male voice, I later learned belong to Homestead Aid Station volunteer “Jeremiah”. Jeremiah called me by name as if he knew me. He kneeled behind me and placed a bottle of water in my hand. I lifted my head and swallowed a small amount. Jeremiah urged me to take another sip. I knew I was now being cared for by a stranger. But, in my state, I was grateful and in need of his help.

Jeremiah coaxed me to drink a few more sips and verbally placed gentle pressure on me to rise to my feet. This took almost 20 minutes. I dragged my feet and we walked together. Jeremiah walked his mountain bike alongside. I knew he had much experience in endurance sports, based on his careful evaluation of my state of mind. He tested my awareness and tried to keep the conversation light. I reached for a tree and braced myself for air. Jeremiah said all the right things…he told me to take my time and continue when I was ready. He poured the water across my neck to cool my core temperature. My breathing calmed. I continued to walk.

We eventually stumbled into the Homestead Aid Station, at approximately mile 47. I collapsed in a chair. Several aid station volunteers began assisting me. They placed a cool towel on my body and sponged cold water on my forehead. I heard their conversations about what action to take next. “Ryan” was managing the aid station, and remembered me from the year prior. He asked me several questions, evaluating whether I had a medical problem or just extreme dehydration. I articulated that I felt I was just really depleted and he didn’t need to call an ambulance. He gave me an ultimatum, which involved due diligence to drink fluid and attempt to eat. 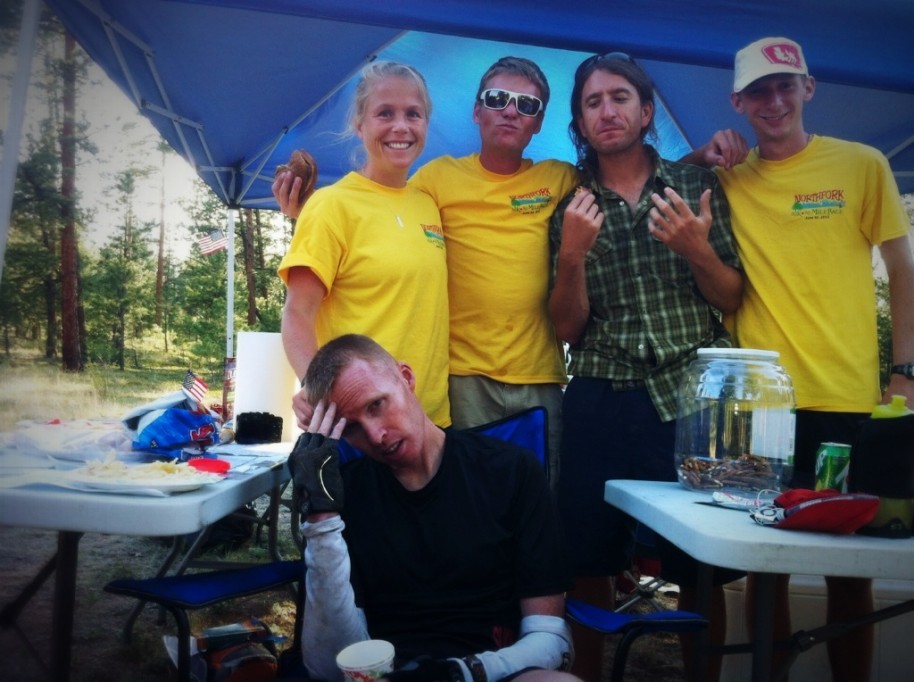 The Kind and Cheerful Suppport of Homestead Aid Station

Over the next 90 minutes, the good people of Homestead Aid Station brought me back to life.  They checked on me every 2 minutes. They empathized and offered their personal touch to making me better. There was much discussion about how to get me down the final 3 miles of the mountain. I told Ryan it was my 27th ultra and only my 2nd “DNF”. He laughed and said, “It’s not a DNF yet.”

Finishing the race? What’s the point, I thought.  I had been 4th overall last year. Here I am, on my back…trying not to vomit. According to my watch, my estimated finish time was hours ago…I’m just so thankful to be able to talk and think again.  Jeremiah joked that I could ride his mountain bike down the hill, and then retracted, saying that it would not be safe for me to attempt to ride a bike in my condition.  He was right. Holy hell…..

I sat up. Then I stood on my feet. I drank a third cup of Sprite and consumed about 4 saltine crackers. I felt so much better than I had when Jeremiah found me. The thought of “finishing” the race crossed my mind. Then, I realized my good friend “Rajika” was still on the course behind me somewhere. He was out there running his first 50 miler.  I thought, I should just stay here and drink this Sprite until Rajika arrives…then try and walk the last 3 miles with him. That would be a great goal…

So that’s what happened. I pushed myself to drink a few more cups of Sprite. I found strength to talk with my friends at Homestead Aid Station. I wish I had noted down on their names…but there faces are permanent memories of a crazy 2 hours of my life. Rajika came into the aid station and saw me there…he smiled. I didn’t have time to explain why I was there or why I needed to finish with him. Jeremiah, Ryan, and the other volunteers cheered and clapped as we walked away from the aid station. I just put my around Rajika and thanked him for being there. Then, our walk turned into a shuffle…eventually a trot. And about 30 minutes later, we crossed the finish line together. Triumphant and emotional, I was just happy to be in that place in time. 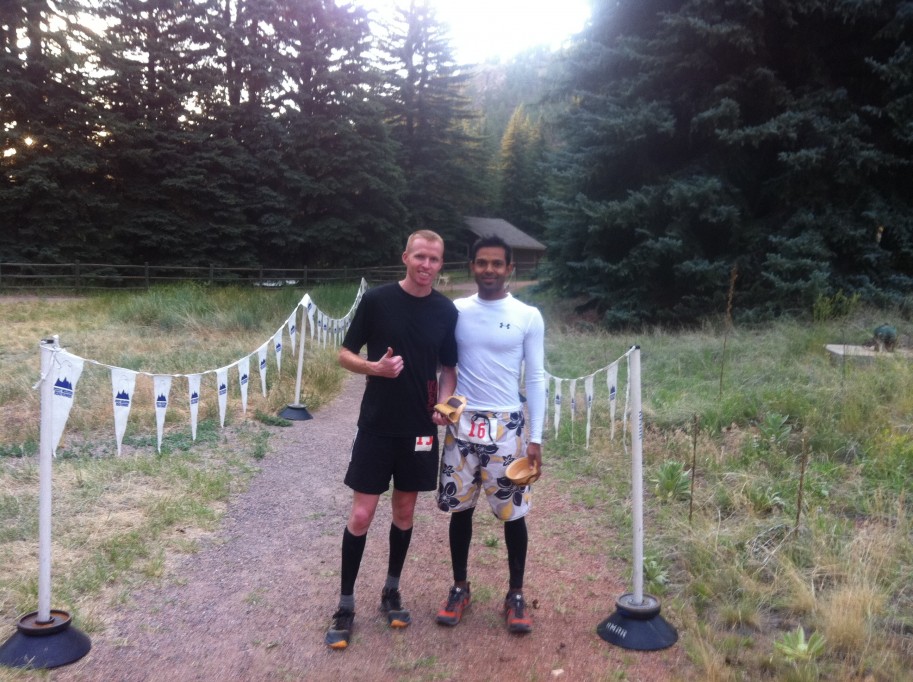 At the Finish with Rajika

Thank you to all the volunteers at the North Fork 50 miler, especially Homestead Aid Station. Thank you to runners Rajika, Kurt, Todd, and RD Janice O’Grady. Sometimes theses races become a challenge beyond anything you can imagine… I am humbled. I am grateful.

Thank you to every volunteer that has ever posted at an aid station all day or night…helping runners with your compassion. Your effort matters…the runners you’ve helped will always remember you even if they never said, “Thank you.”

A single act of kindness throws out roots in all directions, and the roots spring up and make new trees. The greatest work that kindness does to others is that it makes them kind themselves. -Amelia Earhart

» Race Reports » Ultrarunning to Death at the North Fork 50 Mile