I Came, I Saw, I was Conquered 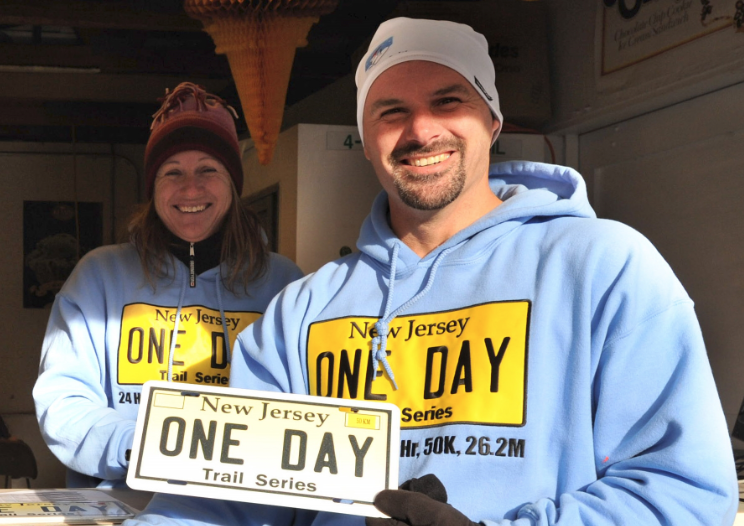 What does is take to build a successful trail-running organization? Do you recruit elite runners from all over the world to draw in high-performing athletes? Do you purchase full-page ads in Trail Runner Mag? Or do you let the high quality of your events speak for themselves? I would argue that perhaps some version of the first two ideas may be necessary in some cases. BUT, in the case of the McNultys, it was word of mouth that helped build their trail-running empire.

On a cold and clear Saturday in 2009, during my initial days of trail running, I “ran” what would be my first of many trail races put together, on by Rick and Jen McNulty, visionaries and owners of the wildly successful NJ Trail Series, whose goal is “to make running fun again.”

This particular event was part of the NJ Trail Series Winter Series, a much welcome change to the heavily saturated summer 5K road race scene. It consisted of two loops on a rolling 5 mile course through Central New Jersey’s Lewis Morris State Park. This was my first real introduction to hardcore trail running where the only indoor bathroom was a shady porta-potty shoved into the corner of the remote parking lot, where shivering volunteers stood frozen at tables handing out Heed with woolen mittens, where bearded folks colorfully clad in Salomon beanies and shorts (yes, shorts!), Marmot Nano Puff jackets, and thousand-miles old Montrails were stationed at various points in the woods at important trail intersections (where people would get lost anyway despite the thousands of bright pink ribbons, flour-arrows and spray paint pointing you in the right direction.)

As a newbie trail-runner who did not yet appreciate the relative “flatness” and “runnability” of that particular course, I DNFed at 5 miles and vowed to do better next time. I walked to the finish line to let the race directors know that I was done. “You can do another loop if you want. We’ll wait.” I declined their overly generous offer, thinking to myself, “Wait? Would they really wait? For me?” Over the past few years, I have learned that each time, Rick and Jen’s offer to wait for every runner, is genuine and heartfelt.

The work that Rick and Jen McNulty have done to bring a sense of adventure to the fairly limited trail-running scene in New Jersey has been nothing short of remarkable.

Jen, a native of northern New Jersey ran track and cross country in high school. She continued running as part of the Hash House Harriers in Italy during college. Rick, who grew up in Pittsfield, Massachussets ran track and cross country in high school but played hockey and rugby while studying business at Florida State. The two met at a local New Jersey hash run of the Summit Hash House Harriers. If you don’t already know what a “hash run” is, Jen puts it nicely, “The hash that we’re talking about is food, you know, after the run!” Rick met Jen during what proved to be a particularly low point in his life. He raised his three school-aged boys on his own while working in lower Manhattan at a financial news company, and used running as his“outlet for inner peace.” Before meeting Jen, his daily rhythm was this: waking up, readying the little ones for school, commuting to the city, working, commuting back to New Jersey, picking up the boys, preparing dinner, putting the children to bed, and doing it all over again, the very next day.

The Genesis of NJ Trail Series

The couple had been married for a few year when Rick’s Manhattan-based company downsized in the financial downturn of 2008. He was left jobless with a family of seven, by now they had added two more children to the mix. What to do? While the family was struggling to make ends meet, Rick and Jen, both having continued to run, put on their first 100 mile Fatass race at a park in Central New Jersey. This was a pivotal, life-changing event. The event started out as a small, informal affair amongst friends, but proved to be so popular that the budding race directors would have to repeat their efforts and put on the race again. Then, word of mouth happened.

As business-minded folks (she on the accounting side, and he on the managing side), the idea to creat a series of trail races was a natural outgrowth from financially difficult times, and the will to support their family. The couple thought heavily on it and decided to make a go for it. New Jersey Trail Series came into being and has since then flourished. Their brand of trail races is unique, exhilarating, difficult, yet doable for most. 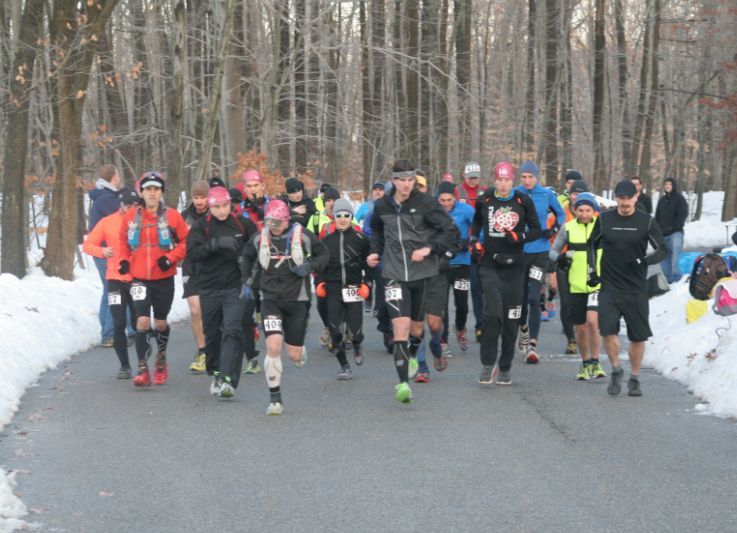 In talking about the thought process of creating, developing, and planning races, Rick and Jen are staunch believers in letting the trail-running experience speak for itself through using different venues. What do they want runners to experience? “Each race has a certain feeling. Muddy is different from Wildcat. [It] is so challenging that you can’t finish it.” At [Running with the] Devil, you get to see the runners as a crowd.” I’ve personally participated in most of Rick and Jen’s events, either as runner or volunteer, and each experience holds a special place in my trail running memory. And it is true, that each race is vastly different in feel than another. Want a toe destroyer? Try one of the fall races at Schooley’s Mountain in Long Valley, NJ. Need a soul and sole-sucking experience? Try the Muddy Marathon. Need several spirit-destroying hill-climbs with great views of Northern Jersey? Try Running with the Devil. How about a perfect introduction to both timed races and ultra-marathons? Sign up for 3 Days at the Fair or the increasingly popular Ultra Festival, both held in Sussex County Fairgrounds in Northern New Jersey.

Rick and Jen want for each of their events to be the kind where “everyone can out and do it. [You can achieve] whatever success means to you. [We want] to provide an avenue for you to reach your goals, for people to challenge themselves and have an experience that they’ve never had before–try to be part of your success. We care about your success.” 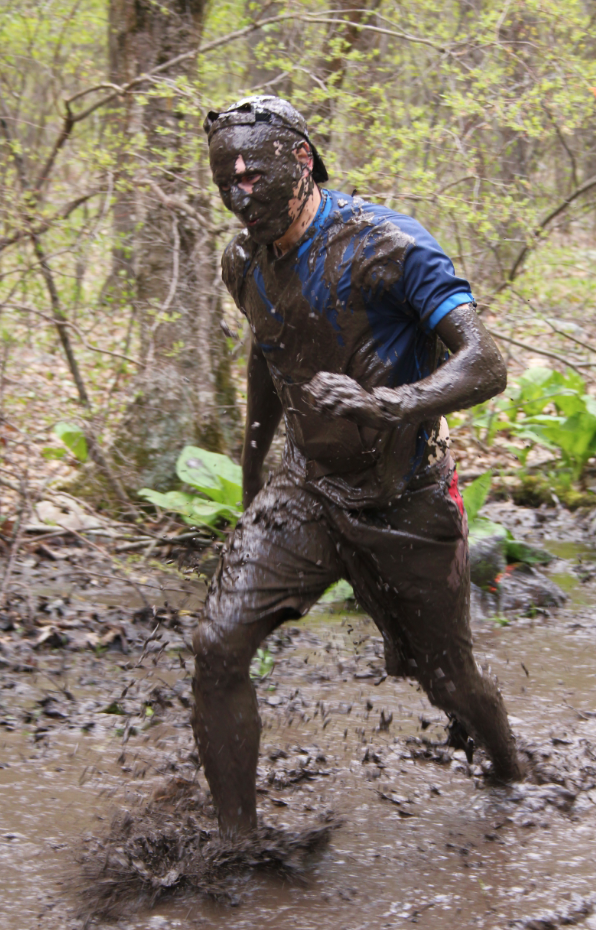 What is the unique appeal of NJ Trail Series events? “We want to be the racing option for everyone, and treat them the same. We don’t want to be known as catering to the elites.” At any NJT event, you’ll find a solid core of “repeat offenders” of established white collar professionals of many ethnicities (mostly in their 30s), many from New Jersey, New York State, and Pennsylvania. You will also find people trying out trail running for the first time, either intentionally (or because some friend duped them into believing it was a road race in the woods. ) Perhaps their most popular event is the New Jersey Trail Series Ultra Festival, in which a runner can choose between several distances (26.2M, 50K, 100K, 100M) on a relatively flat 10 mile loop. A wide range of abilities and accomplishments are represented at this HUGE trail running party-at which it is typically below freezing.

The couple is also known for putting on phenomenally-masochistic-but-incredible timed races. These events, from 3-72 hours long, are increasingly popular since they allow would-be ultrarunners and verterans alike to test their mettle on a fixed course, with easy access to supplies, crew, and er, their cars should the need to escape arrives. Their timed races function as destination races (they would need to be, particularly after running up and down a mountain for 12 hours, or running a mile-long loop for 72 hours) and subsequently attract a wide demographic from all over the United States.Three Days at the Fair and Running with the Devil are NJT’s signature timed events, and are popular amongst long time trail runners and newer folks. 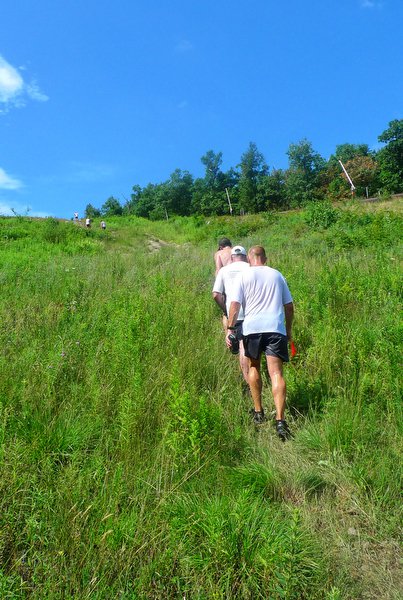 Running With The Devil Timed Race at Mountain Creek Resort in Vernon, NJ

Rick and Jen and various members of their family (who you will see at all races, either running or “volunteering”) welcome and embrace any runner who simply shows up and participates in any of their events. They are experienced in knowing when to push a runner, and when to push harder, which is nearly all the time. On a personal note, t is because of this couple that I, once a newbie, participated in my first trail marathon and finished my first 50K a year later on the same freezing course. New Jersey Trail Series is successful, not only because they have an effective business model, but also because they hold runners and their unique experiences out in nature in high-esteem. The affability factor can be hard to come by in bigger races with big corporate sponsors, and this is not lost on on the McNulty’s. They strive to counter runner invisibility and have a non-penchant for catering to elites (although they are ALWAYS welcome at any event!) Their cut-off times are generous, the aid stations plentiful, the schwag unique, and, they will wait for you.