Today (6/10/16) Travis McWhorter is beginning his attempt for the OKT (Original, or Only Fastest Known Time) on the Sandia Quad Crossing. TAUR Caught up with him beforehand to learn a little more about him and his take on things.

TAUR: Tell us a little about yourself.

TM: First I just want to thank you for asking me to be interviewed. It’s a real honor. You all have done a tremendous job in bringing the trail community together! I’m 29 years old, an ambassador for Altra Running, Hammer Nutrition, Squirrel’s Nut Butter and Ultra Adventures. I have been living in New Mexico for four years. I moved from the Midwest to escape an old life of smoking a pack-a-day and drug abuse. All I knew is that I wanted to run in the mountains with no real plan other than that. Two months before moving I met my fiancée, Jen, at a race. We hit it off immediately and relocated together. I’m currently enrolled as a senior at the University of New Mexico finishing up an undergrad in Geography. The way everything came together still feels like a dream. I ran track and cross country in junior high and high school but stopped after graduation. At 25, I got back into running because I’d acquired a stray Siberian husky. I felt it unfair to own one and not exercise it. So we began walking in the woods which eventually turned into running. Then in 2012 I read Born To Run and started registering for ultras. I really love the community! Everything great in my life has stemmed from running.

TAUR: What is this adventure you are about to attempt?

TM: I’m about to attempt the Sandia Quad Crossing, self-supported, which is running the 26-mile-long north-to-south Crest trail four times for a total of 104 miles and approximately 22,000 feet of elevation gain. The trail passes through three life zones, The Upper Sonoran, The Transition Zone, and The Canadian. The minimum and maximum elevations are 6,600’—10,600′.

TAUR: Why are you running?

TM: I am running to fulfill and nourish my spirit. When and after I run I feel like I’ve accomplished something. I’m more relaxed, more focused. To sum it up, I’m a better person. Running centers and grounds me. The runner’s high is real!

TAUR: How do you train for such an accomplishment? Physically, mentally and spiritually

TM: I’ve ran a self-supported Double Crossing (52 miles) previously and currently hold that FKT record in 12:47, so I knew what I was getting myself into. I also attempted the Quad Crossing last year but wasn’t prepared and failed miserably. So, a lot of experience has gone into this. Physically, I’ve been going on training runs wearing a 14 pound pack and am fortunate enough to be able to run on the mountain whenever I want. I’ve also been racing some of the toughest races in the Southwest such as the Jemez Mountain 50M, Zane Grey 50M, Capitol Reef 100M and Mogollon Monster 100M. I’m a huge fan of diverse training. Some days I’ll run 10 to 20 miles on the track, other days the treadmill, some days the road, but my favorite is the trail. They each serve their purpose depending on my mindset and bodily needs. Mentally, I just try to keep a positive attitude when things aren’t going right and remind myself that the suffering is only temporary. After all, in a day or so, I’ll be back to normal, routine life. Spiritually, I meditate, perform breathing exercises, and recite mantras. If I’m feeling discomfort while running and do these it really helps the mind to rise above. 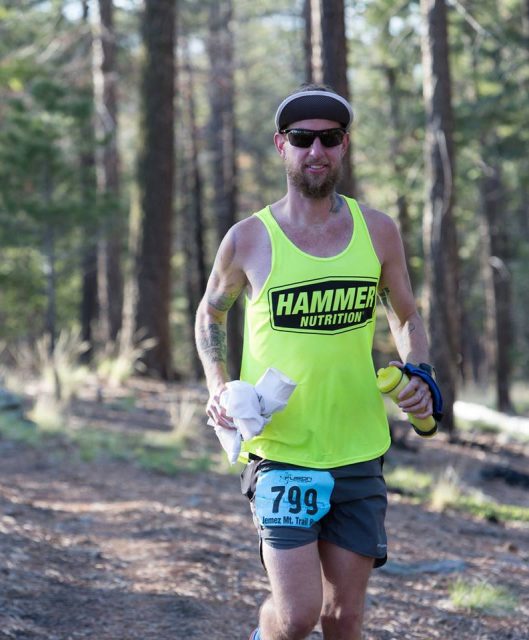 TAUR: What are you most excited about?

TM: I’m most excited about spending an entire day (and some) on one of my favorite trails overlooking my favorite city!

TAUR: What are you most nervous about?

TM: Two things: Mountain lions at night. Although statistically, there’s a much higher chance of getting into an auto accident. The other is the climb back up from the northern terminus through the canyon out of Placitas. It’s 11 miles and 3,000′ of climbing. All exposed. It’s hot. Most people agree this is the hardest section.

TAUR: What have you learned about yourself in preparing for this?

TM: In preparing for this I’ve learned to listen to my body more. I used to think it was all about how many miles and elevation and gain I could acquire throughout the week. These days if I’m feeling tired, I’ll take a day off or ride the bike which has led to much healthier running.

TAUR: What is one thing you would tell a person who wanted to do something like this?

TM: Set your goals and give it your best shot!