Jason Schlarb is well known in the ultra world for race wins such as the 2015 Run Rabbit Run 100. But what about skiing? Yes, skiing. With his latest project, “Skiing the Hardrock 100” Jason and his team attempted something no other individual or group has every achieved: a winter traverse of the legendary Hardrock 100 course. The San Juan Mountains in southern colorado are as rugged and unforgiving a range as any in the US. It’s in the San Juan’s where the Hardrock 100 is held each summer. With the race’s highest point reaching over 14,000 feet, and with almost 68,000 ft of elevation change, the Hardrock 100 is generally considered the hardest 100 mile race in the world. Now, cover this insanely hard course with dense boiler plate snow, strap on a pair of skis and try to cover this distance in the cold.

For his project Jason recruited some of the best male ski mountaineering athletes in the US. This included Scott Simmons and Paul Hamilton along with filmmaker Noah Howell. Scott and Paul are well known in the Skimo (Ski Mountaineering) race scene. As a team, Scott & Paul compete against the likes Rob Krar and brothers Andy & Jason Dorais. Filmmaker Noah Howell is well known for his Powderwhore Movies and has been seen skinning at Brighton with the brothers Dorais.

For this project the team would need to go light and try to move as fast as possible.  The equipment and technical skills needed for this project are not completely recognizable to the everyday skier. Skimo racing equipment is all about being light. The skis weigh only 1.5 lbs, bindings are made of ultra light weight titanium and boots might weight 2 lbs each. So instead of 25 lbs on your feet, you’re moving maybe 11 pounds. It’s like cross country skiing, where you find the most cardiovascularly fit athletes in the world, but point your skis uphill and climb. In order to climb you add Skins to the bottom of your skis. Skins are a double sided material with very short carpet like fibers on one side and adhesive on the other. Skins allow skis to glide forward across the snow then holds against the snow during the push off. In addition to light weight Skimo gear, the team required crampons for their ski boots, as well as ice axes, for both climbing and descending. And if the physically technical parts were not enough of a challenge, they also needed avalanche and rescue gear: avalanche beacons, shovels, probes, headlamps and tracking devices. Finally, to really spice up the sauce the team decided against using GPS; they would rely on traditional navigation skills. 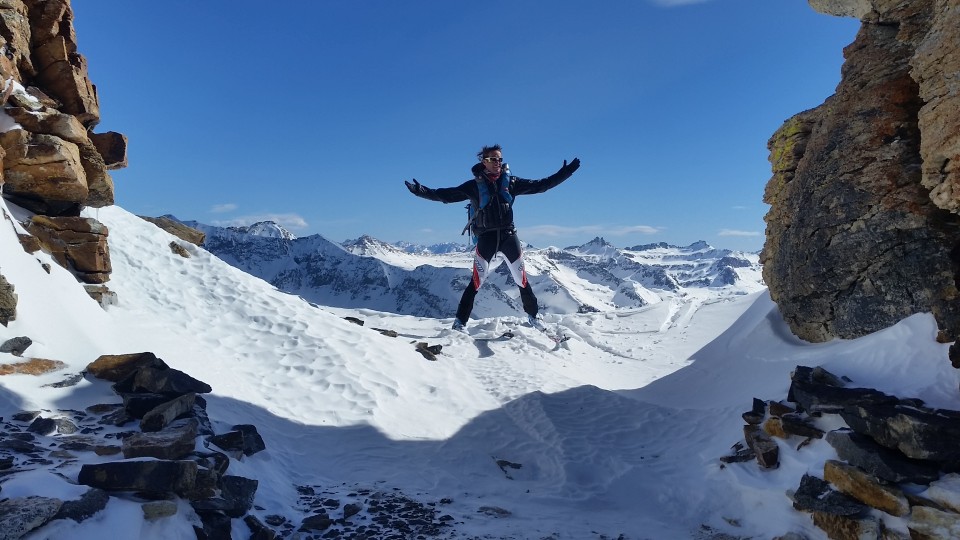 The planned route would follow the Hardrock 100 course and span 4 days. After each day the team would stop for food and to sleep overnight. The weather needed to be ideal. The San Jauan’s are known for high avalanche danger. According to Jason, they would have not started had any storms been forcasted.  On St. Patricks Day, Thursday March 17th, with a green lighted forecast, the team started the project at 6:15am. The plan for day one was to make it 29 miles to the Ghost Town of Sherman where a support crew would be waiting with gear & food for the cold overnight stay. Day one took an exhausting 15 hours and covered 29 miles. Jason believed the project was over. But, as he explained to me over the phone, the crew was fantastic and took amazing care of them which calmed the sea of despair. 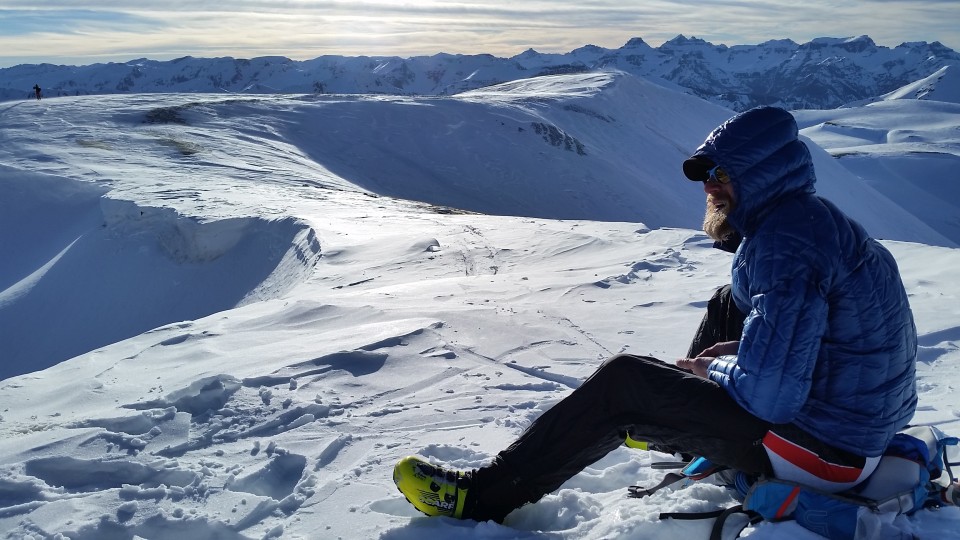 Refueled and rested, the team decided to head out for the second day. Day Two turned into another 15 hour beatdown, covering 28 miles and finishing in the town of Ouray. After the second day, Jason was sure the project was over. “Each day felt like the equivalent of four ultra marathons”, Schlarb said.  But, thankfully Day Two landed them in a hotel with access to a hot spring. With the comfort of the hotel and only 17 miles planned for Day Three, the team decided to hold off on any decisions that night. The next morning once again, refueled and rested, all were willing to march on. While shorter in distance it still took a full 8 hours to complete the traverse into Telluride. And they still faced a fourth day with 27 miles. 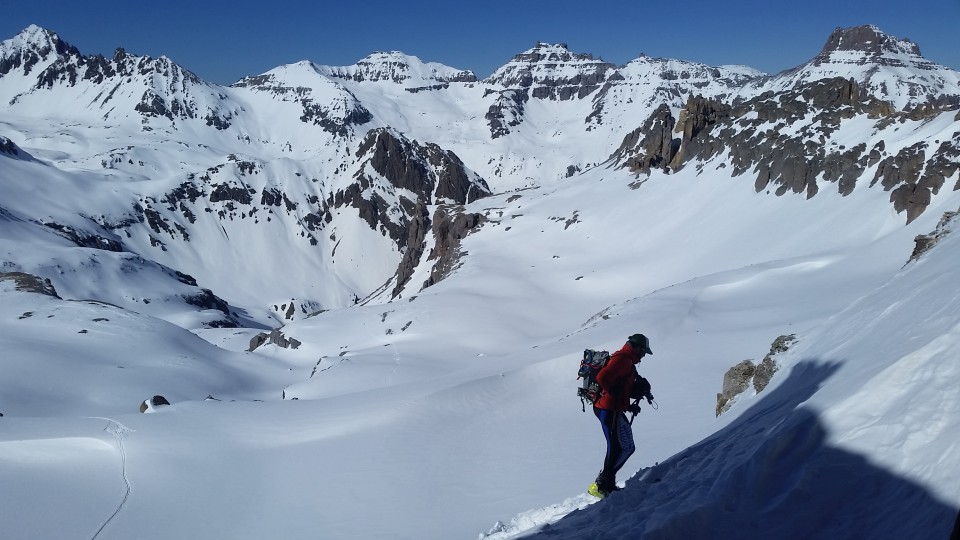 Jason talked of many dark moments. First on his list was, well, the dark. Many many hours in the dark. He added that their constantly wet feet created some intense discomfort. Finally, he spoke of the constant battle with navigating. A battle for the team but also within the team. Remember, there’s no trail to follow in the winter and without GPS feedback they had a lot of decisions to make. According to Jason, on two different occasions conflicts arose while navigating and the team split, deciding to take different routes, somehow coming back together at some point. 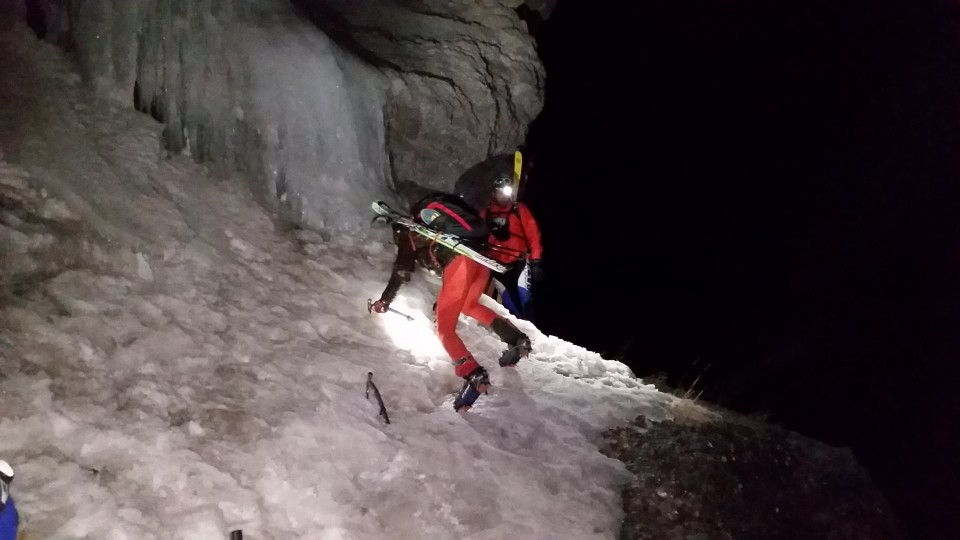 On the fourth day something interesting happened. Prepared for the worst, an entirely different experience came over them. Instead of another beatdown their bodies became acclimated to the experience and while it was yet another 15 hour day their bodies felt good and their spirits were high. On Sunday at 8:55pm the team made it to the finish in Silverton.Congrats to Jason, Paul, Scott and Noah on the first winter traverse of the Hardrock 100! 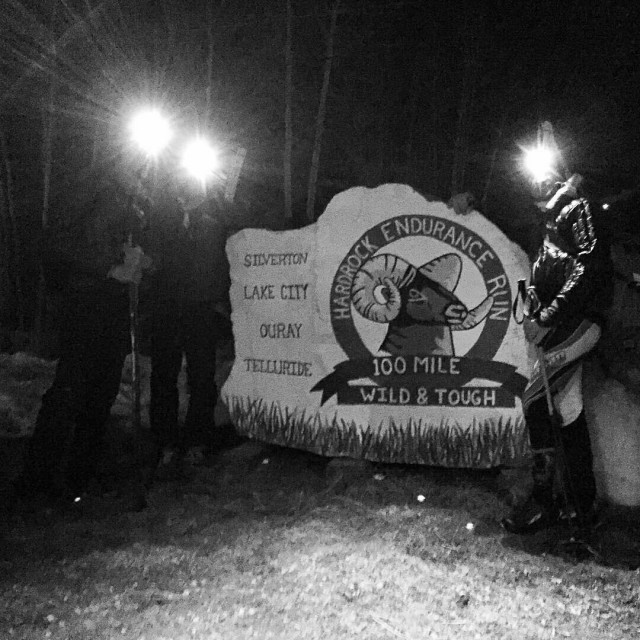 One Response to Skiing the Hardrock 100