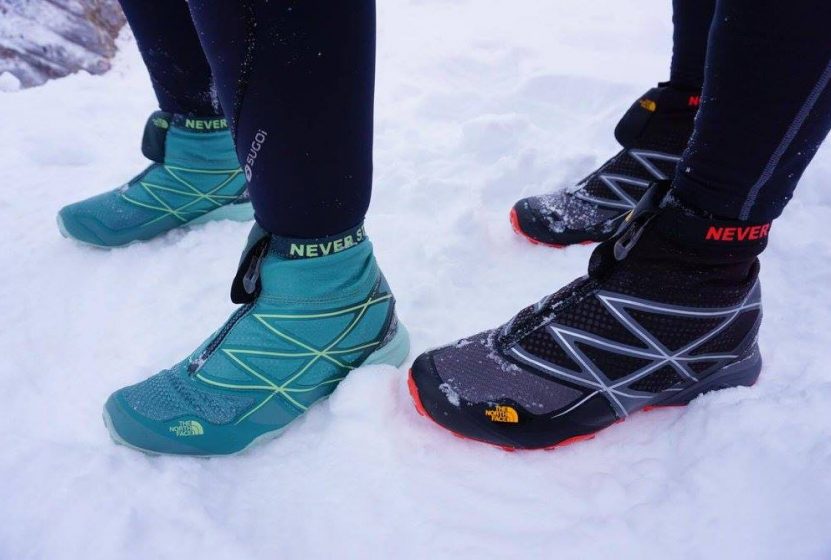 The Ultra MT Winter is the newest addition to the all mountain shoe line by The North Face. Designed for high alpine rock and snow conditions, the Ultra MT Winter was created to keep out snow and debris via their “zippered upper made of advanced Hydroseal breathable, splashproof technology.” The shoe is snowshoe compatible and has extra deep Vibram outsole lugs for extreme traction when used by itself.

The men’s black color and highlight stitching gives it a good all-mountain feel and generally nice looking design. The women’s teal coloring and offset stitching could only be described by our testers as “hideous”. Arianne Brown described the women’s Ultra MT Winter as follows. “I was immediately brought back to the time as a 6-year-old child when I begged my mom for My Little Pony boots.” Other testers felt like they were in Napoleon Dynamite and should immediately put their hair up in a “side pony”. 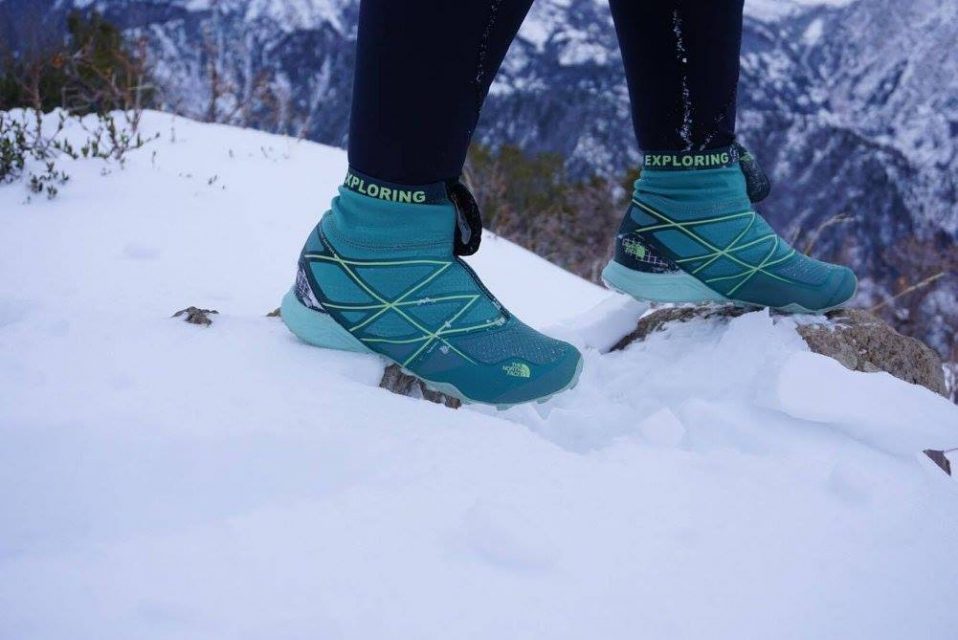 Of the three shoes we tested the Ultra MT Winter has the widest toe box (only one tester felt it was the tightest) and testers agreed it was probably the most comfortable of the three. Where others felt stiff these were comfortable and flexible right out of the box. With a wider toe box, but snug midfoot and heel, the shoes were extremely comfortable, even on longer runs. The internal pull lacing made for easy tightening and loosening, but testers did state they would have like a stow pocket for the laces (similar to Salomon).

Brent – “The internal lacing took some getting used to, but once dialed in they felt great.”

The Ultra MT Winter is the only shoe of the three we tested that had the zipper directly down the front of the shoe. While offering a different design and look, it had no impact (positively or negatively) on the performance. Testers agreed that the top zip cover was over-sized and non-functional. After further research we’ve concluded that the test shoes we received were NOT production models and those seen on the TNF website have a different and far more functional design than we experienced. Those purchasing the shoe will have to find out for themselves.

Testers were split on their opinions regarding how well the top cuff of the gaiter worked. The men felt like it was too loose and did, in fact, let in snow, while the women felt like it worked perfectly and was plenty snug. Apparently, TNF thinks male runners have fat ankles. We would suggest they offer some form of a draw string, something La Sportiva has done well with.

Robin – “My feet stayed warm and dry and I had no problem with keeping out debris.”

Craig – “I felt like the gaiter was loose around my ankles and had two occasions with snow getting in. This was easily resolved by pulling my tights over the gaiter instead of tucking them inside.”

The North Face didn’t use Gortex to keep the Ultra MT Winter water resistant. Instead, their own breathable HydroSeal claims to offer waterproofing from the elements while allowing the foot to shed moisture without loosing heat. All but one of our testers agreed the shoes performed admirably and TNF’s material worked extremely well. Maybe Scott just has excessively sweaty feet. Or maybe he just had a faulty model.

Brent – “This shoe is phenomenal in regards to moisture management.  I NEVER got cold even in the deep snow and the material used in this design did as it was intended.”

Scott – “On two occasions I felt like my feet were starting to get wet. I don’t believe it was from sweat.” 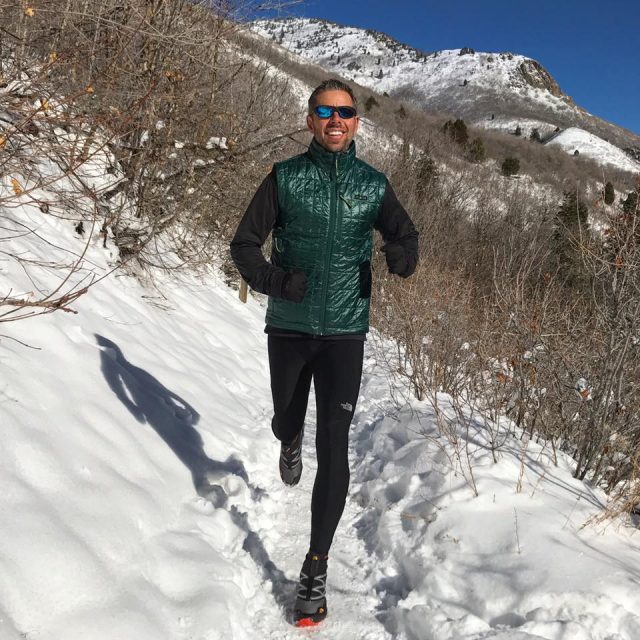 The Vibram outsole with wide-spaced lugs allowed for good traction in the snow. Of the three brands we tested, the Ultra MT Winter came in closely behind La Sportiva. On hardpack snow, dirt, and rock, the shoes performed extremely well. Where they lacked a bit was on wet rock and loose snow conditions – there just wasn’t quite enough bite to get a good grip. Overall, testers were pleased with the design and function and with a few simple adjustments (like tread aggressiveness) TNF would have these locked down tight.

Brent – “Overall the traction performs very well.  I did skate around a bit on light ice but I suppose that is to be expected.  It’s ice.  It slippery.”

Craig – “Solid shoe in multiple conditions. Pleased overall at how well it performed on packed trails.”

Robin – “Sole gripped and handled well on ice, snow, rain, even with rocky surfaces such as the Desolation Overlook.”

If The North Face does one things well, it’s how to build a great shoe. The construction is magnificent, strong, and will certainly be durable over a long period of time. Since this is their first iteration of the Ultra MT Winter there could likely be a few items of feedback we’d offer for improvement. First, a pocket for the cinch laces so they don’t hang loose in the shoe. Second, change the zipper cover to something more functional. Finally, a draw string around the ankles to lock down tightness and keep out snow/debris. These are easy fixes, however, and we are certain TNF is already looking into long term solutions.

Brent – “WOW- I felt North Face nailed on this one.  This shoe is really well put together and designed very well.  I was very much impressed with the welding and overall construction of this shoe.  Nice job!”

Arianne – “This shoe is sturdy, and will hold up for a lot of miles. I imagine they will take a good beating as well.” 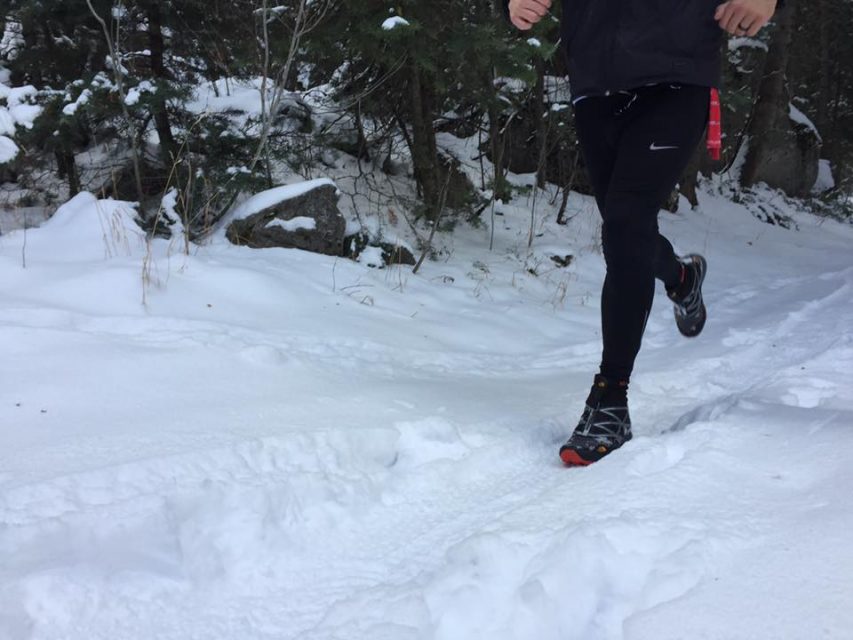 Arianne – “As I set foot on the newly snow-covered mountain trails, I forgot all about the ugly, and just started playing in the snow, weaving in and out of switchbacks, and enjoying my time out on the trails. It was not that dissimilar to the moon boots my mom made me wear [as a child]. She was right. While they were ugly, they were certainly more practical than the fancy ones I wanted, and performed the job splendidly. I nearly forgot the ugly, until I entered my neighborhood, and had to run the half mile past people I actually knew.

The Ultra MT Winter is a superb trail running shoe that belongs in the mountains … just not anywhere the general public can see them.”

Robin – “These are great winter shoes because of the tread and gaiter. I like that the shoe feels like a TNF Endurance shoe and felt confident on an icy ascent. I was hard on these shoes, see no visible signs of failure, and would recommend them to a friend.”

For more information regarding the Ultra MT Winter or to purchase a pair, click HERE!