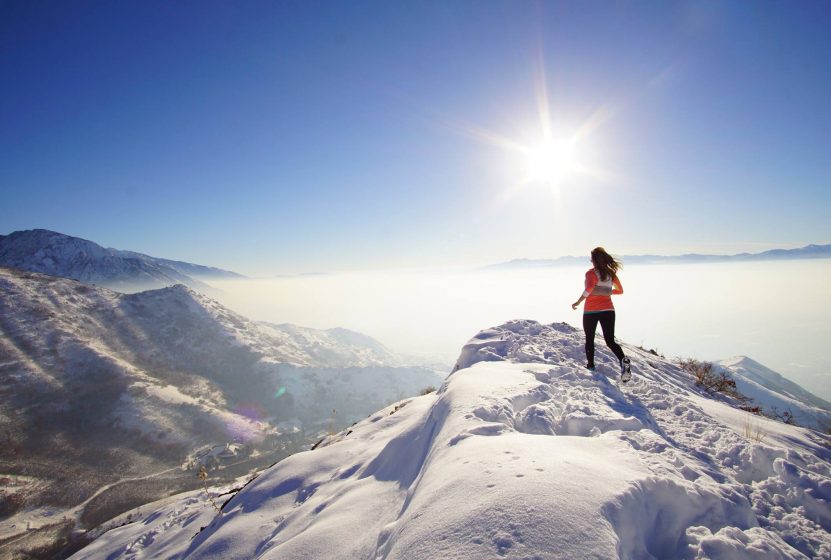 Built on existing S-Lab technology, the XA Alpine is designed for single day mountain adventures.  With ample protection over the toe and forefoot and a side-zip gaiter, this shoe is built for high performance. It should be noted, however, that it is not technically a “winter” shoe. It is designed for alpine settings – rocks, dirt, water, and some snow. But, it’s what they sent us specifically for a Winter shoe review and that’s what we’ve done. Technicalities aside, the XA Alpine shined bright amidst a strong line-up.

Salomon went for a no frills, subtle elegance look to the XA Alpine. Black with blue highlights, the shoe is void of any over-the-top designs, leaving it simple and focused on performance over everything. On the foot it almost makes you feel like you’re in the 5th movie of the original Star Trek series; you know, the one where they save the whales. But once you start moving, the balance and symmetry of it reminds you that you are far from the movies and are in a place much better. 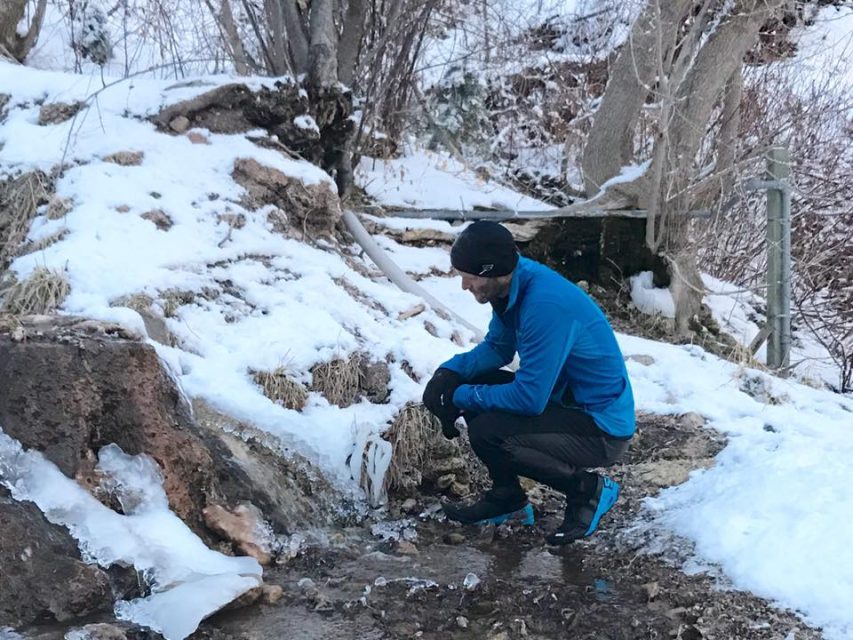 Of the three brands we tested the Salomon XA Alpine is the one shoe that feels exactly like it should, a running shoe. The gaiter, while taller than the others, becomes non-existent to the wearer. The shoe itself offers a draw string cinch closure and stow pocket, allowing for a tidy and secure fit inside the gaiter. The shoe also moves and bends like a normal running shoe. Whether on dirt or packed snow it tends to move with the foot, instead of standing alone as a boot or heavy winter Gortex shoe.

Jenna – “The fit and feel of the XA Alpine was by far the most comfortable of the snow running shoes I tested. Having run in Salomon S-LAB shoes for many years, the fit was immediately familiar and I had no rubbing or chafing even once my feet got sweaty. The only fit complaint was that for narrower feet, coming downhill in them puts a little extra pressure on the top of my foot under the tongue. This only happened when the laces were tucked into the lace garage inside the gaiter, and was solved by leaving them outside the lace garage before zipping up the gaiter.”

Matt – “This shoe felt the most like a running shoe. Peel back the gaiter, and that’s exactly what you see. Super comfy and nimble.”

Robin – “It felt like a normal Salomon shoe, very comfortable and it has a wider toe box. It stayed zipped up while moving, with a well constructed closure at the top. Overall, the XA Alpine has a high quality construction inside and out-I wish all shoes felt like this on the inside.”

Of the three brands, the XA Alpine has the tallest gaiter. This comes in very handy when tights are either not long enough or have a tendency to ride up above the ankles. The gaiter has a firm elastic band at the top, guaranteeing no slippage, and the angled side zip has a firm closure with zipper cover to keep the snow from freezing it. While not technically a waterproof shoe, TAUR did have two testers stand in running water deep enough to cover the shoe and ride up onto the gaiter and neither of them got wet feet. Salomon definitely did something right here.

Craig – “The XA Alpine, by far, offered the best protection from snow and debris than any of the three brands. I particularly loved how high up the gaiter goes, since most of my running tights don’t go all the way to my ankles, often times leaving a gap for snow to get to.”

Jenna – “The gaiter design is asymmetrical, much like the La Sportiva Crossover, but with a little bit less give in the materials. This wasn’t necessarily a disservice because of the way the rest of the shoe is built, and because the gaiter wasn’t adjustable, it helped the gaiter not fall down lower around the ankle while running. The little flap cover at the top of the zipper seems a little out of place or unnecessary. Since the zipper doesn’t come all the way to the top edge, having a flap to cover the gap there seems pointless because it doesn’t cover the zipper or keep it from unzipping. That said, I didn’t have any issues with the zipper coming undone. 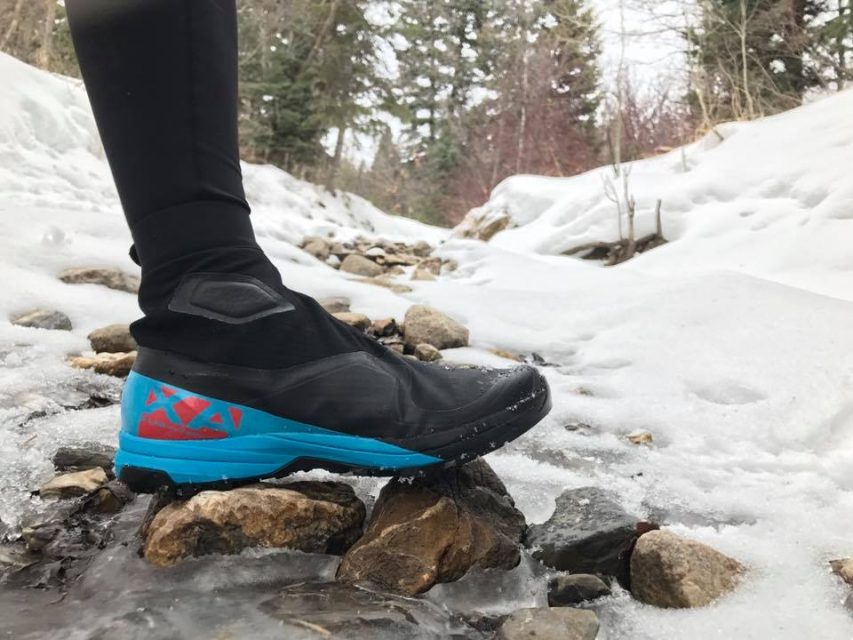 For a shoe that isn’t necessarily waterproof and isn’t meant for snow, the XA Alpine seems ideally suited for it. As stated previously, two of our testers wore the shoe submerged in a stream and neither had any issues with their feet getting wet. The synthetic coating on the upper (specifically, over the toebox) makes it completely waterproof, even fully submerged. The zipper on the gaiter is even waterproof, which is usually the location where water gets in. Overall, there were no complaints from any of the testers in this area.

Robin – “I stayed dry in all conditions, including puddles.”

Craig – “Protection from the snow is one thing, having complete protection from running water is another. The XA Alpine came through with flying colors.” 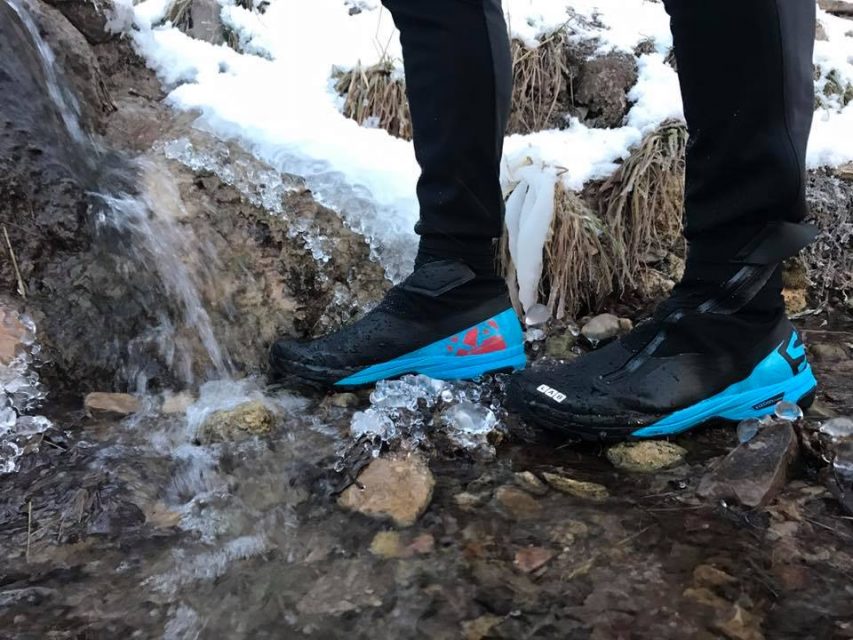 The true character of an alpine shoe came through on traction. While made of Contragrip outsole, it wasn’t the stickiness of the rubber that was the problem. On rock and dirt this shoe excels. However, in fresh or loose snow, or on any kind of ice it really struggles. Testers agreed that the lugs just aren’t aggressive enough. If there is one thing that sets this shoe apart as a non-winter item, it would be this. The easy solution for providing better grip in the snow would be to improve the outsole design and offer something more aggressive that grabs at the snow. Not that Salomon necessarily should, however. This isn’t tagged as a winter shoe, but it is our opinion that even if they made the change, it would likely help in any scenario.

Jenna – “The traction is the weakest area for the XA Alpine. After years of running in the Fellcross and Sense Pro, I have pretty high expectations of the traction provided by my Salomon shoes. Between the stiffness of the materials in the outsole and the shorter lug height, the traction and control weren’t what I expected they would be. The feel isn’t as secure immediately when planting my foot on hard or soft-packed snow as in the Crossovers. That said, the shoe didn’t actually slide as often as it felt like they would, but the control coming downhill in the snow we definitely not as secure as I’ve come to expect from Salomon.”

Matt –“Traction was definitely not as solid as the North Face or LaSportivas, but was still sufficient enough to be confident on slippery downhills.”

Construction of the shoe is simple. Limited seams reduce the risks for tears. Also, Salomon has added a synthetic protective toe cap that adds not just care for the feet in rocky terrain, but it is abrasion resistant. After taking the shoe through very technical terrain it was clear that the Contragrip outsole would last as long as the entire shoe would. With a more dense rubber and wider lugs it is unlikely that one is going to tear or breakdown. Additionally, the upper and gaiter seem very durable and we have every confidence that the shoe will be around for several seasons.

Robin – “The high quality construction inside and out made these very comfortable. There were no visible signs of wear on the glue after multiple uses. And the quicklace system and pocket are great.”

Craig – “Salomon quality is clearly evident in the XA Alpine. This shoe is sturdy, comfortable, and functional. It’s clear their highest attention to detail was made in the construction of this shoe.” 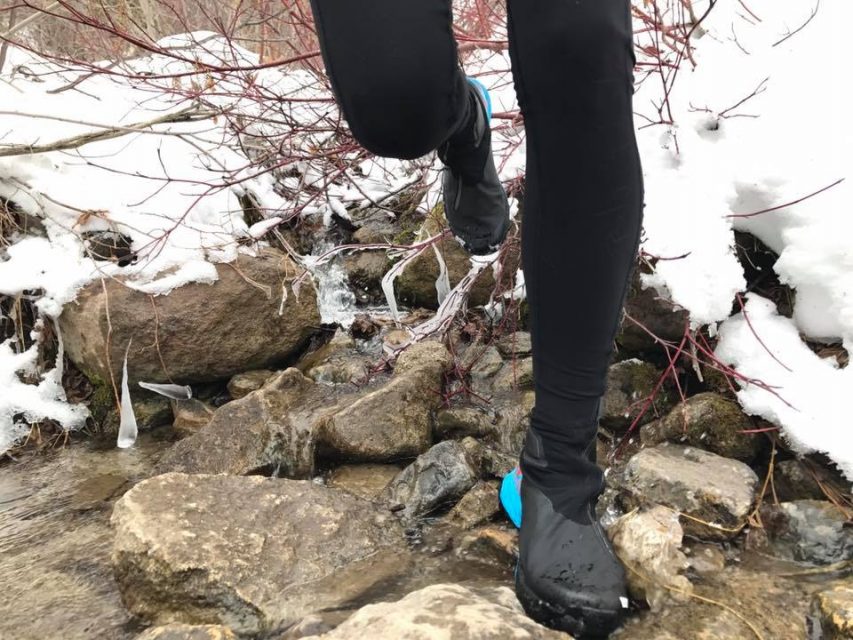 Robin – “These are great winter shoes that are well constructed. The cushion, midsole, and fact it felt like a solid Salomon shoe made it a favorite in most winter conditions. The slippery tread would make me hesitant in recommending these to friends who run on ice/snow in the mountains.”

Jenna – “Salomon knows how to build a shoe that can take a beating. The XA Alpine took a solid winter beating without showing signs of wear other than the flimsy flap covering the top of the zipper on the built-in gaiter. The lacing system is as durable as other Salomon shoes, the inner shoe is built off the Sense Ultra line that has been proven to last through miles of mountainous terrain, and the gaiter construction seems that it could withstand all but a hot knife. Overall a great shoe, especially if you’re already a fan of the Salomon S-LAB lineup.”

Craig – “What impresses me most about this shoe is how comfortable it was right out of the box. Of the three brands we tested, the XA Alpine was the one and only shoe I felt like I could actually doing something significantly long in. 20 miles would be fine, I’m certain of it. While they struggled a bit in certain snow conditions, I would still take this as my all-around favorite shoe of the three we tested.”

Matt -“Really comfortable shoe right from the get go. Feels like your favorite pair of shoes, just for the colder – more wet – long run.”

For more information or to purchase a pair of the Salomon XA Alpine, click HERE! 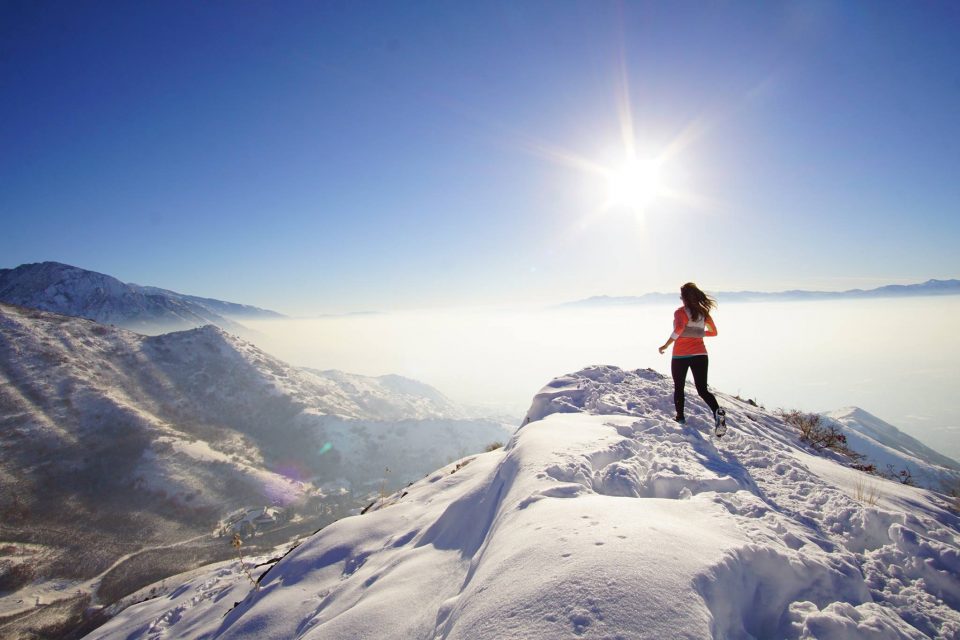