When A Small Adventure Feels Huge

Running while traveling is always a goal of mine. Recently, prior to going to Bolivia on business, I researched the city and surrounding countryside. I was amazed to find that our destination city of Cochabamba sat at nearly 8,500 ft elevation and was surrounded by mountains that rose as high as 16,500 ft. Shocked at the proximity to such amazing peaks, my coworker and I made plans to stay an extra couple of days to take it in by climbing its most prominent peak, Tunari, which sits at almost exactly 16,480 ft (or 5023m).

More shocking than the height itself, the trail to the top was only 3.5 miles (one way), starting at 14,000 ft. Arriving in Cochabamba, we were faced with a full week of work, all the while staring up at the massive peak that overlooked the city. Each day we awoke to get out for a short run through the city or surrounding hillside, a couple of times getting as high as 10,000ft, which we hoped would afford us a bit more acclimatization in preparation for heading into thinner air.

We ran to the Cristo de la Concordia, a Christus that stands as the second tallest in the world and overlooks the city proper. Ascending 2,000 stairs to the base of this beautiful statue provided us with the effort we’d need to hike the upper steep slope of Tunari, from 15,500ft to 16,480ft. The following day we ran from our hotel in the city east into the hillside to get some extra vert and our lungs above 10,000ft elevation. Day after after day we worked, but kept taking sneak peaks out the windows towards Tunari, anxious to get on the mountain. 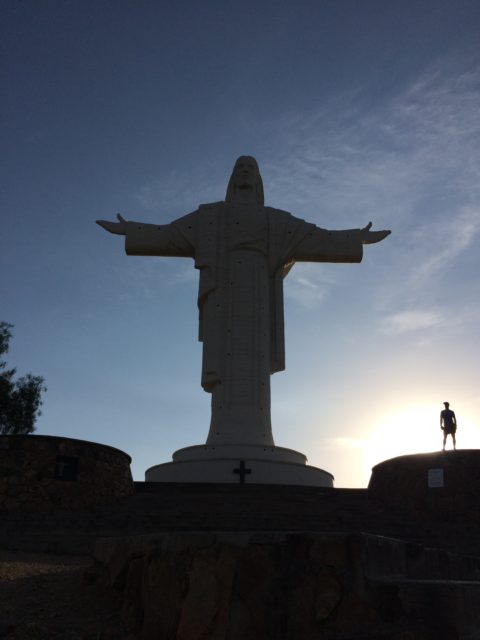 As Saturday approached we recruited a local coworker who enjoyed the outdoors to join us, as we didn’t have a way to get up to the trailhead (we had been walking and taking taxis all week). Sergio was a capable mountain and road biker and had frequently ridden as high as 13,000ft. We were confident he’d have the fitness to get to the top. Even though the trailhead was only 20 miles from our hotel, it took us nearly two hours to make the journey. Traveling through the city was slow and Google Earth directions aren’t the best in 3rd world countries, so we had to backtrack a time or two before we got to the canyon. From there we wound our way nearly 4,000 vertical feet up into the Tunari Wilderness, passing through hillside villages and Alpaca outposts.

The first couple of miles were on dirt road, which seemed so out of place as we ascended towards 15,000 ft. Along our journey we passed a large heard of Alpaca and then heard a couple of dogs barking and knew were approaching a ranchers outpost. We had been warned of crossing paths with locals as they might be drug smugglers and robbers who preyed on tourists. What we actually found was so far the opposite that the experience can only be described as emotional. 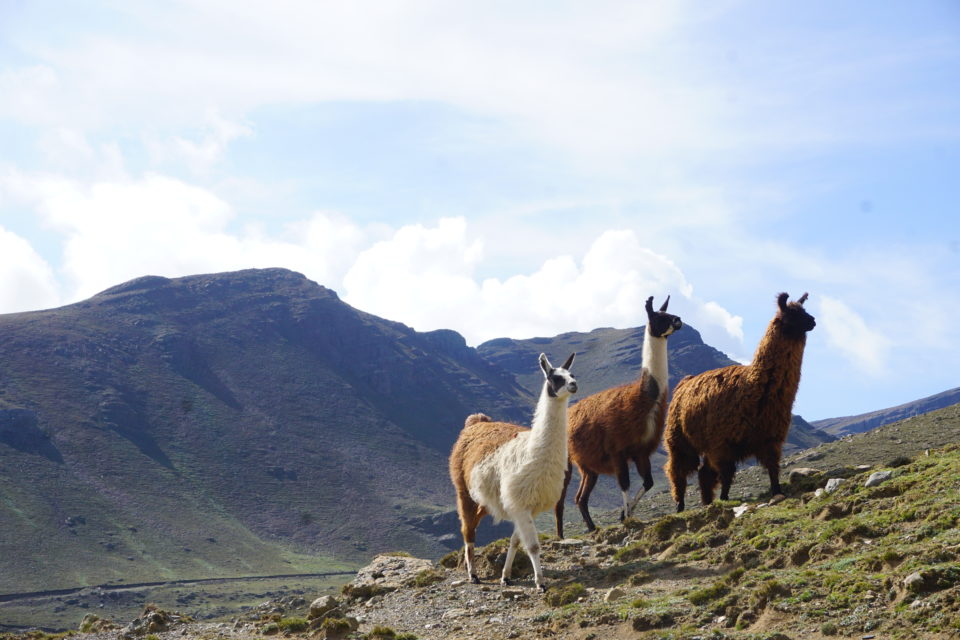 We turned a corner and witnessed an elderly gentlemen putting a thatched roof on a rock hut. To his left were two other men who seemed to be sheering a couple of Alpaca that were lying on the ground. I ask my coworkers if they thought we could go over and watch for a moment and they said they would ask (I was the only one of the three of us who didn’t speak Spanish). We were immediately welcomed over and then surprised to find that they weren’t sheering the Alpaca, but had, in fact, just killed them and were preparing to skin and quarter them. As a deep lover of animals one might think that I would take offense at this grotesque image, but what I witnessed was culture in its purest form, which turned out to be nothing short of beautiful. As this elderly man began the skinning process, I laid my hand on the abdomen of this amazing animal and could still feel the warmth of life now lost. I wasn’t sad for the beast, but instead inspired by the cultural purity of it all. This is how these men would survive; by cultivating, protecting, and then killing and selling these magnificent animals. 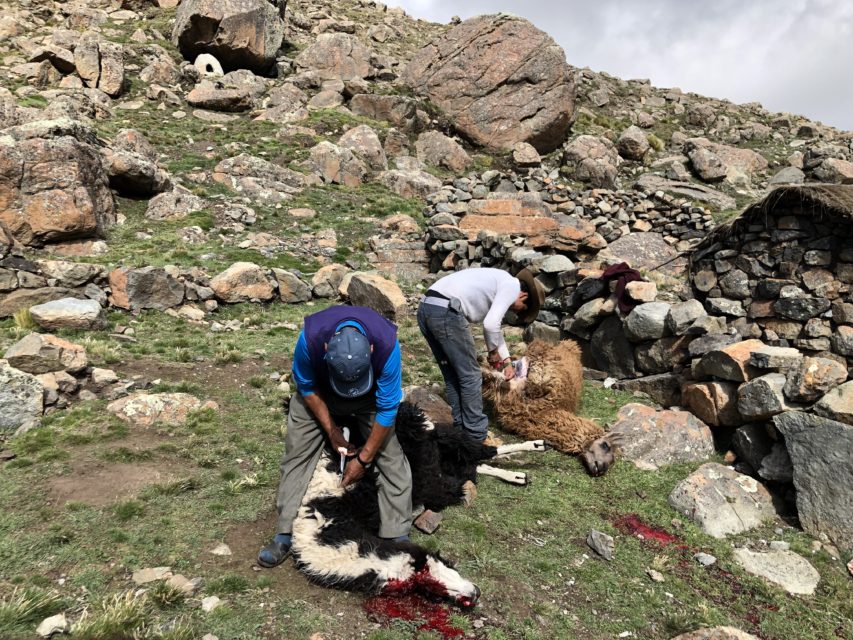 Alpaca ranchers at 14,500ft elev harvest their animals to sell to market for meat and fur.

We continued on, passing two inspiring lakes as we made our way towards the ridge. We chose what appeared to be an easier route to the summit than what was given to us on the map. The trail was marked by cairns and the footsteps of our predecessors, but today we were alone on the mountain. Moving above 15,000ft wasn’t too difficult as I was acclimated from a summer of running at 13,000 and 14,000ft in the Rocky Mountains. However, once we hit 16,000ft things became noticeably more difficult. Labored by limited oxygen, our pace slowed. If any attempt was made to push the effort, it resulted in a couple of minutes with my hands on my knees and breathing heavily. Once we made the summit ridge and could see the top it was clear we had made a mistake. The route we had chosen didn’t actually take us to the summit of Tunari Peak, but that of it’s near twin to the south.

As we hit the summit of peak 5020m it became clear that we would be unable to get to the true summit of Tunari without having to backtrack down the mountain nearly 800 vertical feet and climb back up on the proper trail. Knowing that the difference between the two peaks were less than 10 feet and that Tunari didn’t represent the actual high point in the range, we accepted our fate and chose to stay and enjoy the reward of our mistake. What difference does 9ft make anyway, especially when we were there to just have fun and experience this beautiful landscape? 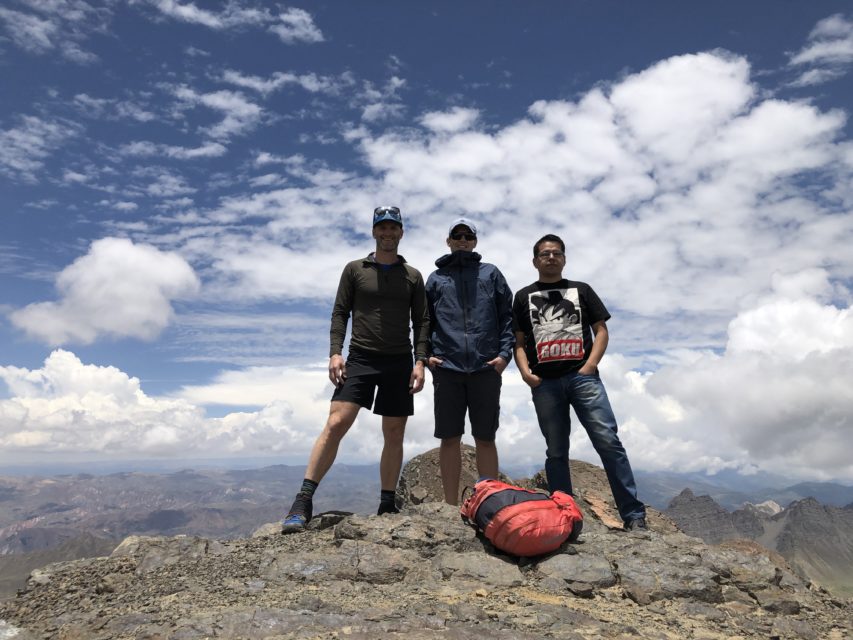 We spent about 40 minutes on the summit eating, taking photos, and even flying my drone. As clouds approached we knew it was time to head down and we slowly made our way off the mountain. At that elevation, it was nearly as laborious to go down as it was to go up, but we still found ourselves laughing and playing on the steep hillside as we all but fell down the steep, sandy slope. Back on the road it was an easy walk back to the car, only broken up by more waves and kind words of our hard-working locals who had now nearly finished the thatched roof. 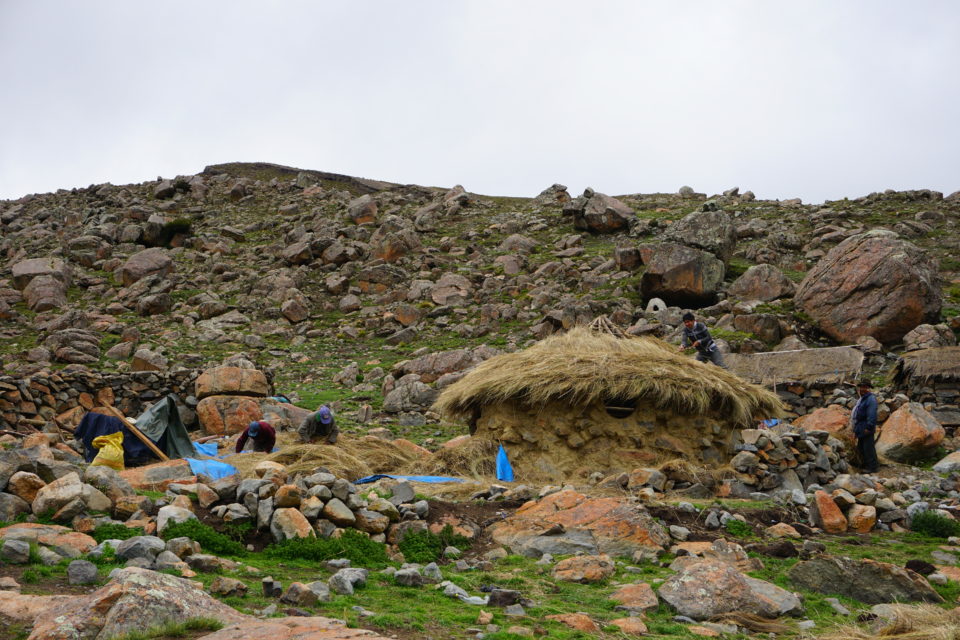 The ride home was almost silent as we quietly reminisced the experience of the previous 5 hours. For me, this was a life-altering event. Not because I had climbed more than 2,000 vertical feet higher than I had ever been in my life, but because I had been able to be a part of something so culturally beautiful and pure that I can’t do anything be feel reverence and respect for what I had witnessed. If there is a goal in any of my future travels, it would be that I could have that kind of experience again, regardless of where I go.

Thank you to Kogalla for supporting these incredible adventures that we get to have through Trail And Ultra Running. Their partnership and support are greatly appreciated. You can check out their incredible Straplights HERE.