A Note of Encouragement

I know you’re out there.

Maybe you’re frightened that this one thing in your life that has brought you so much joy, empowerment, strength, confidence, and relief could be stripped away from you.

Maybe you’re pissed off, or you’ve shut down. You keep telling everyone you’re fine when you aren’t. You’re putting on the strong face, or the optimistic face, while a stifled scream sits caged in your chest.

In July of 2014, at the end of a long day of bouldering with a good friend, I hopped off the rock and shattered my talus. For those who don’t speak anatomy, that’s the main bone in your ankle that holds the weight of your leg. I had been trail running in earnest for a few years and was in the middle of training for my first 50k. I had finished my Yoga Teacher Certification the year before. Physical activity was my life. When I came to, after a four-hour ORIF surgery, the first thing I asked my trauma surgeon was how long until I could run or do yoga again. He looked at the floor and shook his head. Then he said the words that made my heart turn to lead: 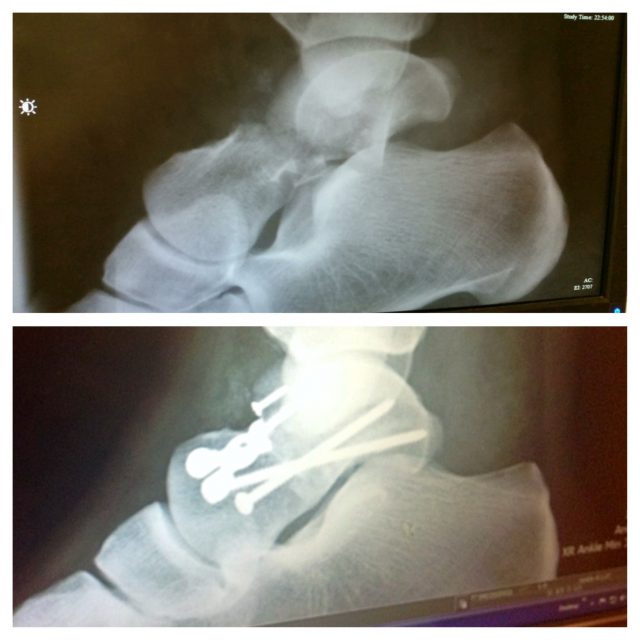 In the following months, I scoured internet forums, articles, and social media platforms for any accounts of people who had shattered a talus and returned to an active lifestyle. I couldn’t find anything positive. All I wanted was hope. I would have to become it. 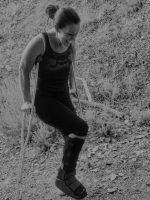 It didn’t matter to me that the only other people I could find who’d experienced this particular injury either went on to have more surgeries or couldn’t even stand comfortably. I was going to overcome. I was still scared. When I sat down in my surgeon’s office four months after my surgery and told him I had just walk/jogged a 5k, he picked his jaw up off the floor and then asked me to go spread whatever mojo I had going on to his other patients in the waiting room.

I’ve run races, climbed mountains, and my regular yoga practice is going strong.  Since then, open abdominal surgery, another broken foot, and some really dark mental health struggles have earned me some insights that I now deem precious. I don’t believe that I am tougher or more special than any other athlete.  I do hope that my experiences might be worth something to the injured and struggling out there.

Attitude- It sounds trite, I know. I have mentally cursed out many a friend or bystander for telling me to keep my chin up. It’s okay to get discouraged. It’s okay to be depressed. It’s okay to grieve the loss of your former self and to be afraid of what may or may not come next. Just don’t stay there for too long. Even if you are only capable of coming to the surface a little at a time, that counts. Find the positive. Trust that time heals.

Acceptance- Maybe your competitive mind just threw up a red flag. “We don’t accept defeat!”
Except that sometimes we do. Sometimes we’re down and out. We’re scared, and hurt, and broken. There is no such thing as courage without these emotions. No such thing as heroes without trials to overcome. And you will overcome them. Accepting where you are now, lets you know exactly where you are starting from, and gives you a better idea of where to go from here. The next big step is accepting your own power. I don’t know about you, but I tend to get really caught up in the, “But what if I can’t?” mentality. The “what ifs” aren’t getting any of us anywhere. You are stronger than you ever imagined. Time will help. You’ve got this.

Rest- You’ll probably lose some physical fitness. There might be some atrophy. I know we all go a little crazy at the thought, but rest is incredibly key for any kind of recovery and repair. It has helped me so much to think of this time as mental training. This mental training is hard-earned and will never leave once you’ve got it. Physical fitness comes back. Let the resting do its work. 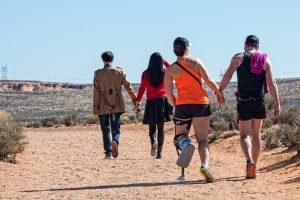 Community- You aren’t alone. I know it feels lonely. I know your friends and running buddies are racking up the miles without you, and it sucks. Reach out. Go to lunch. Build other aspects of your relationships. Reinforce your family ties. I discovered one of my favorite activities and created some of my closest connections in these down and out years. I started by crewing my husband on crutches at his first 100 miler. I have crewed countless races and volunteered at race after race since 2014. I love it. I adore putting my heart and soul into helping my community reach their goals. I thrive off of doling out encouragement, empathy, care, and awesome aid station food. Injury puts us in a unique position to offer the kind of camaraderie in suffering that this community is built on. Use it. It can make us all better. In a time when your body needs to chill, take the opportunity to strengthen your soul.

These hard times are the ones that make us if we let them. You will heal, and your body and mind will adapt. Maybe it will never feel the same again, and maybe you’ll bounce back even stronger.

I know one thing for sure: You won’t ever be the same person you once were.

But isn’t that the point?

One Response to A Note of Encouragement