Gaining strength from my family at the Pony Express...

I ran my first ultra nearly 5 and a half years ago, and since then I’ve run 17 total. Living in Philadelphia for that entire time, the 5th largest city in the country, I’ve spent a majority of my miles running the historic streets in the City of Brotherly Love. I’ve always loved running roads as that where I started running as a kid and admittedly, my clumsy nature makes me nervous running trails. I adore being in the woods and passing the hours on trails, but I’m always nervous that I’m going to fall with every step, therefore I find myself still spending most of my miles on the road.

A good friend of mine signed up for the Grindstone 100 miler, her first, and asked if I would be a pacer and crew member for her. Having run 2 100s myself, one on trail, I was so eager to help someone else on their 100 mile journey and jumped at the chance. I knew Grindstone was a tough trail race in Virginia (23,000 of gain/loss throughout the 101.85 miles), so I was extra excited to see what a “real” 100 miler looked like. 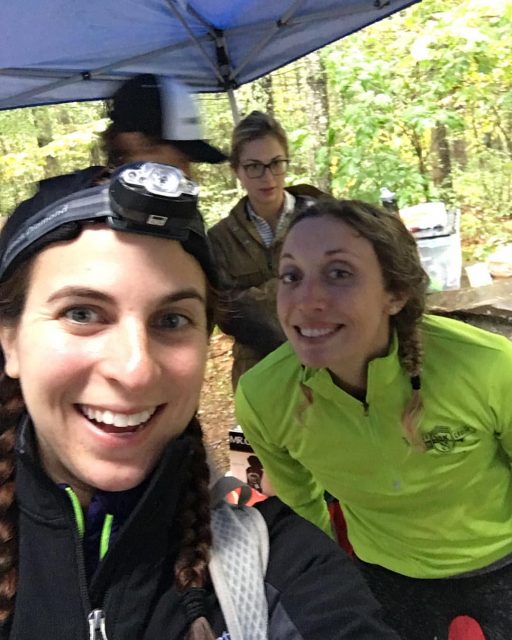 About to leave the mile 65 aid station with my runner

“Real,” you ask? Well, as a road runner, especially one who has done a lot of her ultras on road, this trail 100 felt like the ‘real thing’. Like the 100s I read about when I started the sport. Like the 100s that ultras really were about. I realized quickly that I felt like an imposter. How could I show up and feel confident pacing and crewing if I hadn’t run a “real” 100? My first 100 was on road, I DNFed a flat trail 100, and I had a pretty great race in my 2nd 100 finish that was on flat trail. But I hadn’t scaled mountains. I hadn’t had to climb or scramble. I hadn’t had to deal with many rocks and roots.

Grindstone has a 6 PM Friday start and I was to start pacing my runner around mile 52, so I needed to try my best to sleep between aid stations while crewing. The first two stops, I was able to get an hour here and an hour there. But the stop before I was to pace my runner? I barely slept. I had crazy anxiety dreams and panicked that I wasn’t cut out to pace her. I had to bring her 28 miles to her next pacer and that included 7 miles straight down the mountain, then up and down another. I felt like I had signed up for a test and was there to take it, but that I hadn’t studied for it. How could I actually do this? I felt like an imposter for even attempting it.

I picked her up at mile 52 and 11.5 hours later, I handed her off to her next pacer. We had made our way down the rocky and slick 7 mile hill (it rained for 28 hours of the race). I had helped her ascend the next mountain and in the windy rainy night, we descended it. We told jokes, we talked about life, we played memory games, we sang songs. We talked about running and I did my best to distract her when her IT band acted up on any downhill.

When it was all said and done, I realized that I had wound myself up so much with anxiety and feelings of false credentials that I nearly ruined the experience for myself. No, I didn’t have much experience running ultras in mountains. However, diminishing my abilities in my own head nearly cost me this experience. I’ve lived the motto “fake it ’til you make it” in many aspects of my life, but doing so in ultras made me feel like a fraud. But guess what? I did it. We did it. She finished her first 100 miler like a champ and I was a little part of helping her do it. 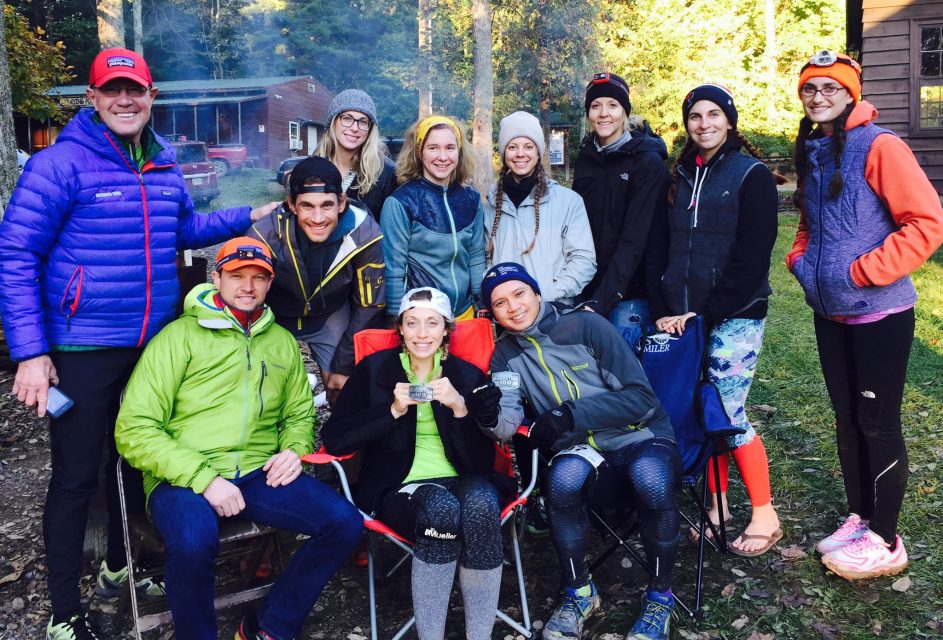 Crew, pacers, and RDs with our two Grindstone finishers!

I have learned to not devalue my experiences, even if it is different than others’. My 100 miler finishes, while on less treacherous terrain, are still 100 mile finishes. There are races that are harder than others, but all 100 milers are real. I’ve done things that very few people in the world have done and feeling less than of myself was pointless.

So be proud of what you have done – no matter the distance or ‘difficulty’, and instead of being anxious to do something different, go into the experience with an open mind because you’ll learn so much through doing so.

» Community, Featured, Musings, Trails » Am I an imposter?

4 Responses to Am I an imposter?