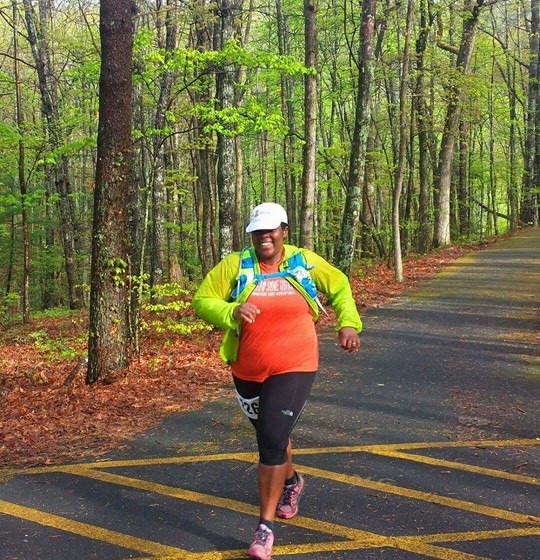 Something happens to you when you are out in the forest alone, the nearest people 2 miles away in each direction, and having spent every ounce of physical and mental energy in your reserves.

The complete silence/the sound of the forest envelops you, your senses are heightened and alert, and you lose your sense of time, of place. You are in a sort of sylvan zone. Sometimes you hallucinate, other times you are keenly aware of your surroundings…Waldeinsamkeit. Only now, during my half-hearted attempt at RD Perry Sebastian’s Double Tap 50k at Fort Mountain State Park in Chatsworth, GA, the einsam part was null and void.

The race began normally enough, even as a heavy rain drenched the 20 or so runners assembled at the start line in the middle of the road. We ran down hill a bit and turned right into the lush, wet and cool forest whose colors where made sharper and more vibrant by the insistent precipitation. I wore my trusty TNF Capris, a Mountain Goat Adventures tech shirt, a Patagonia Houdini Rain Jacket, and my new favorite trail shoes: Pearl Izumi Trail M2s.

The air was cool. The raindrops splashed aggressively on my face. All was well even though I immediately fell in last place. I wasn’t concerned about finishing however, as I had already decided that I would do as much of the course as possible on my bum knee that had been aching on and off for the previous two weeks. I promised myself to run only as much as my knee would take me.

The course was comprised of a combination of the rolling Gahuti Trail, the Lake Trail, the Big Rock Trail and several mountain biking trails of various difficulties. There were beautifully runnable but fairly technical downhills, coupled with a bit of rock-scrambling on the Big Rock Trail (that also had AWESOME views of surrounding peaks of the Cohutta Mountains).

At the first aid station, there was a cheery woman named Kina, who was really sweet and especially grateful that I had wished her  “Christos Anasti” for the Greek Orthodox Easter Holiday. She then made me a sandwich.

As I entered the second aid station, I was heartened to be met by two friends, one who serenaded me with a song and the other who opened the hatch of the Swiftwick mobile and offered me socks and sustenance for the next few miles.

One of the highlights or (extremely low points–depending on how much of a trail-freak and masochist you are) was the power line climb. You know, those long lines of tall power lines that cut through forest bringing energy to far away places. Had I had ANY clue of how demoralizing this part of the course would be, I would have purchased trekking poles proactively to ensure that I would be able to keep up a semblance of an acceptable pace.

The Power line climb seemed miles long, when in actuality it was about a mile with a 1000% grade the entire way. Ok, that’s a bit of hyperbole… It was extremely taxing and tiring, though and I had no idea how many miles I had already accomplished because my Strava was really off.

As I ascended this climb, I listened to The Golden Compass: His Dark Materials imagining a daemon resting on my shoulder reacting to each of my expletives.

Fast forward to the top of the power line climb, when you are thanking your maker that you GOT THROUGH THAT. The course turned left on a trail and was rolling. As I neared the next aid station, a chiseled, tanned hunk by the name of Rick Hulsey in a yellow “Enabler” t-shirt came running towards me. He ran with Black Diamond trekking poles and carried a humungous back pack with water and supplies.

“Don’t worry, you won’t have to do it again. The only really slightly bad part left is the double tap, but it’s pretty short.”(Pretty short is a very relative term in trail running. It could be 2 miles, 5 or 10 depending on what you’re comparing it to.) Consoled by that, I began running again trying not to be too slow, taking breaks on the uphills. One of the reason I love the trail racing community is people look out for each other, even if it’s their job. They care, genuinely.

Rick told me about his long distance running in honor of a family member, stopped to show me snags in tree trunks, and spoke proudly of his children. I told him about my own running adventures and how I ended up in the South. He then let me use his poles for the next mile or so, until we reached the Pinhoti connector trail.

“How did you not bring poles?”
“Uh, I don’t know. I wasn’t thinking. I should know better.”

We arrived at the Double Tap aid station, I thanked and bid adieu to Rick and began to descend the Pinohi Connector trail.

“It’s only like three quarters of a mile, yelled my friends Crystal who had decided to pull out at 14 miles. “You got this!”

I was so slow on this 1.5 miles, Rick came looking for me again, offering me his poles. An angel.
The next 4 miles were doable. I had eaten a turkey sandwich furnished at the lake aid station, some jalapeño kettle chips, amazing granola and flat coke. I felt that I could at least finish 20 and be ok with myself. The last two miles, were—er, memorable. Just as you think the horrible parts are over, the slightly inebriated aid station volunteers shattered my hopes of an easy downhill free fall to where I would be finishing.

“It’s all uphill from here.”
I didn’t believe them? “You’re kidding, right? What’s this trail? Where does it go?”
“Well, you could run down this trail and reach a dirt road and then be chased by the dogs. Yeah, sure.”
“SHIT!”
“It’s a long, slow, switchbacking two miles. You got this.”

“Jesus” I muttered, almost jumping in the back of the volunteer’s pickup. I veered left and started climbing. My friend Amy, who had supplied many of us an extra pair of dry Swiftwick Socks from her Swiftwick-mobile, passed me about a tenth of a mile in and offered me her poles since she had been on her way to finishing. I declined, telling her that I would not be doing 50k that day. She finished the course about 45 minutes before I came into the finish that I wouldn’t finish.

As I rounded the millionth turn in the millionth switch back, I saw movement out of the corner of my eye. I do wear glasses but am not a contact lens wearer, so I squinted, still not able to see what had caught my attention. Having experienced a few hallucinations during many a long and arduous trail run, I took this dark movement as what is usually is, a tree stump or a dark hollow, or simply nothing. I rounded the corner and moved closer towards the “tree stump”–this time the tree stump had two sets of eyes, ears, shiny, ebony fur.

The two adolescent cubs stared at me curiously as if I were just another one of them, perhaps more smelly and a bit more bizarre. One raised itself upon its hind legs and peered at me from behind a tree 50 yards away, above the next switchback. The other stared and began to make bear cub noises that sounded much like a dog’s frightened whimpering.

After the blood returned to my fingers, after my hands stopped shaking and after I stopped hyperventilating (for nothing, really), I blew the small whistle attached to the left shoulder strap of my Nathan VaporCloud hydration pack.

Silence. A pure, forested silence only interrupted by newly sprouted spring leaves rustling in the the hot and humid wind, the snap and crack of small tree branches broken by small furry animals, the somewhat menacing gurgling of a small culvert…

And then, birds. Several birds began to answer my whistling in a reassuring cacophonous but somewhat harmonious mish-mosh of sounds that did the job of eradicating most of my fear.

I looked around. Was this the Hunger Games? Was I the black Katniss? Where was my bow and arrow? Peeta? Cinna?

Alas, I was still fatgirldeathslogging stuck on the side of some mountain in Northwest Georgia on never-ending ascending switchbacks, the nearest people a mile away in each direction, with some bears thrown in the mix: two cubs with mom peering out from the den that I had passed earlier wondering to myself if it was in fact a bear’s den.

After I had finally come to my senses and calmed down, now kind of excited that I had had the rare opportunity to experience bears while on a trail run, and er, by myself, I picked up a large branch and a heavy rock. I tried to make myself look bigger to the cubs, who simply did not care. The rock just made me feel better?

I waved the branch and shouted “HEY BEARS. PLEASE GO AWAY. I JUST WANNA GO HOME. I’M TIRED, CAN’T YOU TELL? I’VE BEEN ON THIS MOUNTAIN FOR LIKE 10 HOURS. PLEASE? GO. AWAY.

They continued to stare with increasing curiosity and not move so I tried singing/yelling my own version of Rihanna’s “Hard”. HEY BEARS, IT’S SO HARD, YEAH-EH-THIS IS SO HARD while waving my stick and rock and tooting on my baby whistle, no Luther Vandross or Schubert this time.

The furry animals continued to stare at me and make appropriate bear noises that sounded very much like whimpering puppies, only louder and more insistent. After a minute or so of looking like the crazy black woman waving a stick and a rock on the side of the mountain, I decided to charge on and bite the bullet (or my tongue, literally.) I realized I would have to pass by the ebony fuzzy wuzzies twice, as they were stationed about 20 feet above the switchback and a similar distance below the upper switchback.

I felt momma’s presence in the air, but thank goodness I had only sort of seen her eyes, because that would have been really freaky for this Brooklyn-turned-kinda-mountain-girl. Soldiering on, and simultaneously resigning myself to death by bears, I power-hiked past them like a bear-passing pro. You wanna kill me? There’ll be a fight.

Alas, there was no fight. They lost interest and continued playing amongst the trees, as I inched my way to the last aid-station I would encounter on my DNF. At the aid station, I commented on the stupid switchbacks and the bears.

White people reaction: OMG. You saw bears???? THAT. IS. SO. COOL. I’ve NEVER seen a bear on the trail. WOW. You’re so lucky!

Black people reaction, later on when I posted about my experience on the NBMA (National Black Marathoners Association) Facebook group: Wait. Bears? Did you say there were BEARS on the course? That DNF would’ve been a DOA. 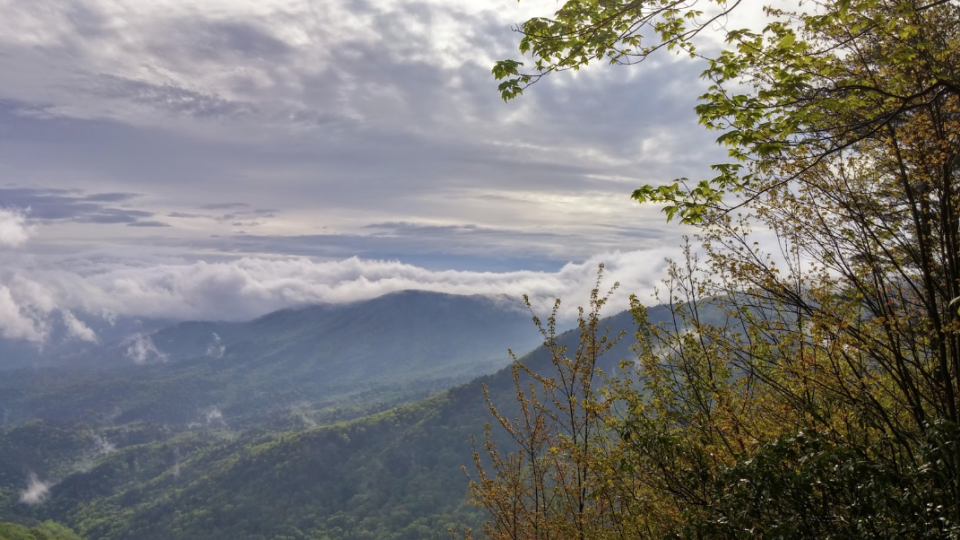 View from platform at second/penultimate aid station
As I left the aid station, the volunteers told me that I would probably not be able to do the last 10 miles.
‘I wasn’t planning on it. I’m done”
“Well, ok. You’ve got .2 straight uphill on the road. Sorry”
“Oh that’s totally fine. I can do .2 more after that shit. I’m good. Thanks for being out here.”

I trudged up the road to where we had started earlier that morning in the torrential downpour. My friends Susan and Thomas happened to manning the aid station to my delighted surprise, and boy, was I elated to see them. I plopped into a camp chair, poured a stiff pink gatorade, and closed my eyes.