Steve Ross was obese, doped up on meds, and suffering from knee pain and headaches. Oh, and at one time, he walked with a cane.

His breaking point came one day when he was with his young son. “I was on medication and my son did something wrong. I realized that I couldn’t correct him because I was ‘high’ from the medication. He had more control over the situation than I did. I then realized that I can’t be a dad like this.”

Ross remembers visiting doctors and hearing the same story: the only solution was different medications. “I had to make a change. I was having migraines every day. I realized there had to be another way around this. No doctor ever told me to lose weight. I just figured why not, let’s give it a try. I had to decide that I am going to make this chance and there is no going back.

“Losing the comfort of food was a lot better than the pain of losing my family.”

Ross quit the medications for his knees and headaches, and began to lose weight. Later he started walking regularly — without his cane — and then started running. He started slow, alternating running a block with walking a block. “I just loved getting out and having some time to myself.”

The Oregon resident figured that if he could run three blocks, then why not one mile? He then got up to 5-6 miles. “It took time but I got there. I was doing 10- or 11-minute miles but I was doing it consistently. The big thing was to be out there consistently, three to four times a week without excuses. A lot of people start, then stop for a couple of weeks. I didn’t stop. I ran every week.”

He calls his transformation from couch potato to walker to runner “a step-by-step progression.” Looking back, he was surprised that he was “able to run without any pain or discomfort. Taking it one step at a time, I lost 85 pounds and have not gained any back at all. There are zero total regrets.” 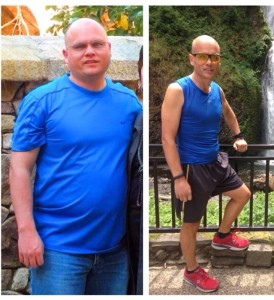 Ross became inspired by a movie about people running 3,000 miles across the Sahara Desert. He loved his first trail race experience because “In a big race, you don’t get to know people.”

After his first 50K, he felt “pretty beat up but I still had energy in there.” So then he did a 50-miler just over a year ago. Even though the temperature hit 95 degrees, at Mile 32, he felt great. “I trained so well, that I felt like I had just warmed up. The body had accepted that a marathon was just a warm-up phase.”

Then he set his sights on the 100-miler, which “scared the hell out of me,” he says, adding, “But I figured that I came this far, so I am sure that I can do the 100. That’s what really inspired me to run more than 24 hours. I realized the same thing. Yep, the body is beaten up but I still felt that there was more energy in there. That inspired me to do the harder 100-milers, which I am doing this year.”

He still runs three or four times a week, mostly on hills with elevation gains. Solid training is why “a marathon to me is 100 miles,” Ross says. “My body does not feel anything after running a marathon. I want that same feeling at the end of a 100-miler.”

Not only did Ross begin an exercise regimen, he changed to a plant-based diet.

He knew that many ultra runners embrace the vegan diet. “So I know I needed to make a change. I found that my energy levels and performance has increased so that I am able to do 6- and 7-minute miles. And recovery is a lot faster. And my injuries have decreased significantly.”

His relationship with his family has also improved even though no one else is a runner.

“It’s great in the sense that I can be a loving father,” Ross says. “I can go out and do things. I am mentally present where before I couldn’t be mentally present. I’d be on the couch, covering my eyes because of a migraine. If I wasn’t there, now I can understand what’s going on. We spend time together, doing things. We do hikes together, and we couldn’t do that together before because I would be stuck with a migraine or a headache. And wouldn’t have the energy to do such a thing.

“Now, with my kids I can be there with them, listening. I may not always have the answer but I can listen and understand what they are going through.”

This article was one of our winners in our Run with Us, Write with Us contest. Have a story to share? Email us at info@trailandultrarunning.com

One Response to From a Cane to 100 miles – Steve Ross