Brothers Jacob and Rivers Puzey to Compete With the... 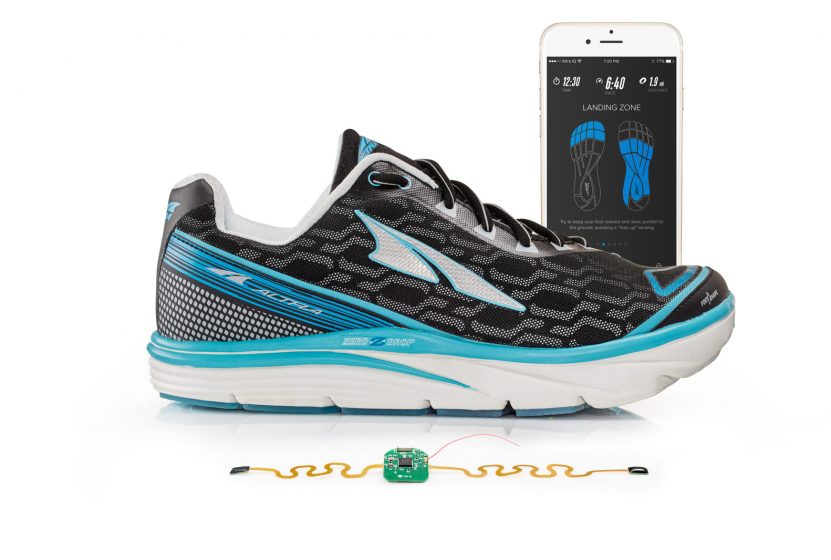 LOGAN, Utah, April 6, 2017 /PRNewswire/ — The Altra Torin IQ powered by iFit®, the world’s first smart shoe and running coach in a shoe, is now available. The only shoe on the market with dual footbed sensors, the Altra Torin IQ gives runners accurate running intelligence in four critical areas and live coaching feedback during every run.

“For too long, the two main metrics to measure your run have been ‘how far?’ and ‘how fast?'” said Altra president and co-founder Brian Beckstead. “With Altra Torin IQ shoes, you get a much richer picture of your run with real-time coaching. We analyze the problems in real time, and provide you with proactive suggestions so you can correct and improve right away. Running has never been smarter.”

Altra Torin IQ powered by iFit is the first and only shoe on the market to feature full-length, razor-thin, featherweight sensors and transmitters embedded in the midsole of each shoe — providing runners with live data for each foot individually.  Using Bluetooth technology, the shoe communicates directly with the Altra IQ iFit app on the runner’s smartphone to continuously transmit data in four key areas:  landing zone, impact rate, contact time and cadence. The app also tracks pace, distance and time.

During the run, Altra Torin IQ serves as a stride coach, relaying real-time feedback in two ways: through the app screen and audible coaching. Runners have the ability to customize how often to receive live coaching based on their preferences.

“Many running injuries can be prevented by learning efficient, low-impact running form.  However, it can be really hard to analyze running form on yourself,” said Altra founder Golden Harper.  “This shoe is designed to help make runners more efficient and to extend the running career of road and trail warriors out there. Intelligence is power, and Altra Torin IQ can provide insights like nothing else.”

“The coolest thing to me is that we are able to give runners coaching tips in their moments of greatest need,” Harper continued. “For example, as a runner’s form starts to slip near the end of a race, the IQ shoe will recognize that and give them coaching tips to get them back on the right track.”

Both Harper and Beckstead agree the Altra Torin IQ shoe is an excellent training tool for a range of runners, from beginners who want to avoid bad habits, to elites who want to fine tune their form.

Altra Elite Athlete Zach Bitter has logged hundreds of miles testing Altra Torin IQ, including training for his American record 100-mile time of 11:40:55, set at the 2015 Desert Solstice Invitational. Bitter logs 120 to 140-mile weeks during training.  His next major race is the legendary Western States Endurance Run in July in California.

“The beauty of the Altra IQ technology is its variety of uses. It’s quick and accurate workout feedback can be applied right on the spot, with coaching tips that help correct problems rather than just telling you that you’re doing something wrong,” Bitter said. “As a high-mileage runner, I think one of the coolest aspects is the information I learn about how my stride is affected over distance, through injury, sore muscles and such,” Bitter said. “Many variables affect your training, so having baseline data of what you typically do while healthy and being able to spot-check that during a race is invaluable.”

Altra IQ powered by iFit app specs:
Landing Zone:
Landing zone helps runners avoid extremes such as landing with a harsh heel strike or too far forward on the toes. The Altra IQ app reports landing zone feedback with audio tips, as well as visual feedback on the app screen to give runners a clear idea of where each foot is hitting the ground.

“Our goal is not to change a runner’s foot strike, but instead to provide them with the tools to understand a proper foot strike is the result of having proud posture, compact arms and a high cadence — all the things we’ve been teaching in our Run Better clinics since Altra was founded,” Harper said.

Therefore, live coaching tips included in the Altra IQ app guide runners to make changes to their posture, arms, or cadence that lead to a low-impact landing. For example, if the runner is over-striding, or landing on their toes, they’ll receive an audio coaching tip that will help correct and optimize their landing.

“We’re hoping to guide runners into a ‘safe zone.’ As each runner is different, their individual landing zone may vary between a soft heel landing and a slight forefoot landing,” Harper said. “In general, the goal is to avoid the extremes of landing as a means of reducing injury and stress on the body.”

Impact Rate:
Altra Torin IQ’s dual sensors monitor how hard each foot hits the ground and identifies left–right imbalances in their stride, for a metric Altra calls “impact rate.” Coaching guidance from the app helps runners land more softly and achieve more balance, which may lead to a lower likelihood of injury.  Altra IQ reports impact rate in two ways: a number expressed in millig-units (mG) and as a visual on the app screen showing how balanced the runner is.

Harper added, “As runners increase speed, impact rate will naturally increase, even when running with efficient technique. The goal is for runners to maintain a consistent impact rate number while running at a given pace.”

Contact Time:
Running performance is contingent on many variables, and ground contact time is one of the lesser known.  Altra IQ contact time data shows runners how much time each foot is in contact with the ground and is reported as a number of milliseconds (ms), with a separate score for each foot.  With this data, runners can improve left-right balance and optimize contact time.

“Lower contact times are often associated with a higher cadence and more efficient, lower impact foot strikes,” Harper said.  “Additionally, a left-right imbalance may serve as a clue revealing a current, past, or forthcoming injury.”

Cadence:
Cadence is the live “pulse” of a run and a key factor in form, foot strike and efficiency.  Altra Torin IQ’s live cadence tracking provides data to keep foot turnover at the optimal rate for the current running pace, helping runners become more fluid.  Altra IQ powered by iFit reports cadence as a number of total steps per minute. In general, working up to a higher cadence in the 170 to 180 range improves running form and efficiency.