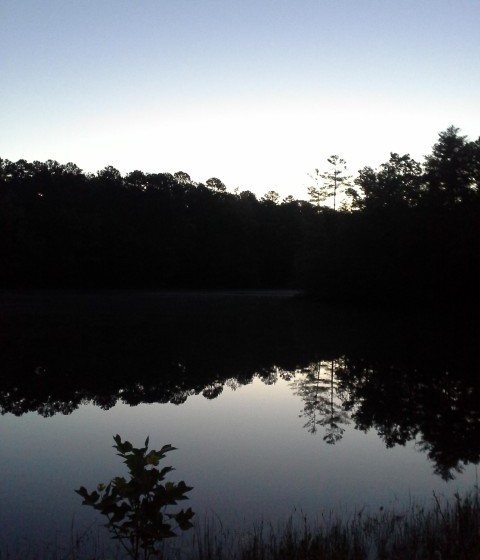 “You is strong. You is powerful. You is important.”

These lines were the mantra I chanted aloud over and over again, as I ran and power-hiked the first half of the Oconee 50K course in early May. (Never mind the absence of the proper conjugation of the verb “to be”…. I was inspired by “The Help”, you know, since I’m in the South now.)

The race started at the visitor’s center of Oconee State Park in Mountain Rest, South Carolina. The course utilized the Oconee Trail, Winding Stairs Trail, Old Waterwheel Trail, and the Foothills Trail along with a Forest Service Road to create a beautiful course that was varied and interesting. The trails ranged from mildly technical and hilly single-track to a wider and flatter multi-use trail (primarily on the Foothills Trail). At a few points on the course, particularly in the 7-10 mile range, you could see the glowing, effervescence of the Blue Ridge mountains coming to life mid-morning through the thickening foliage against the backdrop of an exquisitely blue sky.

We started at 6:05 in the still dark morning, made even darker from the tree canopy. I wore my cheap Eddie Bauer headlamp that somehow managed to make everything darker and scarier, and headed out last onto the course, tripping on every branch and imagining bears where there were only shadows cast by none other than myself. We ran around one of the two lakes in the park that was stunningly beautiful with its calm, black water juxtaposed against the blue and pink of the sky, the reflection of trees feng-shui-like on the still water. 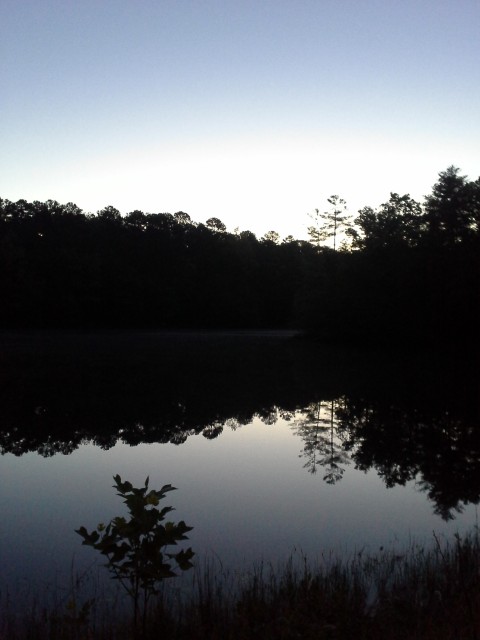 The course then continued onto the Oconee trail, which was only slightly hilly, but in the dark seemed like a mountain. Okay, maybe I’m exaggerating. This part wasn’t so much hilly as it was fairly twisty-turny, which caused many gasps and “OH’s” and “SHIT’s” (there may have been some other choice phrases blurted out very loudly in the silence of the forest.)  Surprisingly, I did not fall. I did NOT fall (on this section anyway) but my abs were very, very sore the next morning from having had to prevent myself from falling more than a few times.

A couple of times, during the first 1-3 miles of the course, I heard voices. I wasn’t hearing things or hallucinating, but since I didn’t actually SEE anyone else until about a mile in, I felt a little crazy. Was I imagining things that I wanted to hear because it was dark and I was slightly perturbed by all the silent shadows that weren’t me? Perhaps. The voices were definitely two non-gasping-for-air female voices. Wow, they must’ve started late, or They’re even slower than I am. THANK GOD. Or, They must just be hikers who are really fricking fast power-hikers. UGH! That makes me feel great! Damn.  Eventually it dawned on me that they were sweeps, trailing my very slow pace. I am typically alone in the beginning of an event but generally manage to catch up with at least one other person a few miles in. Having the sweeps literally on my tail was sobering but somewhat comforting. I enjoy the solitude of the forest immensely, but I also enjoy hearing the sound of human voices on a particularly lonely stretch.

took about an hour and 15 minutes, since to my brain the trail was mountainous and technical (it wasn’t, in hindsight.) The next three miles flew by as they were mostly on a flat portion of the Foothills Trail. Oh this is great. THIS IS WONDERFUL. I CAN RUN. WOOHOO! I’m picking up speed. Wow, this is a fabulous trail. No roots. No pesky chingoncitos. Even the sweeps commented that I was right on target.

Wait. I’m on the ground. How the hell did I get here? No, really. I don’t remember falling. Did I actually fall? On my side? OUCH!!!! MY ANKLE!  Is it broken? Nope. Can I run? Yeah. I’m OK. The sweeps aren’t close enough to laugh at me. I’ll just lie here a minute. Just a minute. Is that poison ivy? I dunno. Whatever. I should get up. Yeah, I’ll get up.

Lesson #1: When you are aiming to beat a cut-off, you should wear a watch or at least look at your cell phone clock. I did not do this. Since my primary goal was to enjoy running a 50K again, the notion that I would miss the cutoff had never entered my mind, since this race was supposed to only have imperceptible hills. The hills were quite perceptible in my opinion. And highly annoying.

These miles were tougher than the previous set. Although the terrain wasn’t hellishly hilly, it was hilly enough to slow me down, not significantly but enough that the sweeps urged me to keep the pace at the next aid station (where I enjoyed BBQ pork rinds, pickles, bananas, watermelon and boiled peanuts. I almost asked for a rack of ribs and slaw. Yes, this was a Southern race. Boiled peanuts. That’s all.)

The next 2.5 miles were downhill. Like seriously downhill. I love downhills at the end of a race. They signal that the finish is near, that all one needs is a little more non-existent fuel from the tank that has been empty for the last 10 miles or so. Unfortunately, this long but scenic downhill was smack in the middle of the race and it proved to be the beginning of my death march. I caught up to a lovely woman who had also slowed down and was having some issues with the downhill. Oh, NOW’s MY CHANCE! I took the downhill as fast as I could, even though I knew intellectually and physically that I was trashing my quads too early on. When I saw the first very fit and ultrarunning-looking person (you know the type) walking UP the hill as though THEY were on a death march, my heart fell. WHAT THE HELL? RUN BUM!!!!! Fine. Just keep going. Step over step. Relentless Forward Progess. Sometimes you just do things. One foot in front of the other. Keep going. You is strong. You is powerful. You is important.

The downhill hurt a bit, and in hindsight-going to fast put a lot  of pressure on my right leg and IT Band. The outside of my right knee started to throb, but I still kept going, because that’s what trail runners do. YOU KEEP ON GOING.  The woman I had passed was no longer in sight. I couldn’t hear the sweeps talking (loudly) about one of their upcoming nuptials.  I was going to take this.

What goes up, must keep going up.

The trail took me. Once we turned back into the forest, the trail was an extended three-mile long hill to the halfway-point aid station. I chose not to look at the time again (and to my detriment), because I was pretty darned sure I would make the cutoff with time to spare. During the brutal (mostly mentally brutal) incline—which someone lovingly referred to as “this really annoying hill”—the sweeps and the woman who I had passed were quickly gaining on me. I hadn’t realized how slow I was moving. I jogged a few steps then walked, knee throbbing and tight hamstrings and all. In just a few minutes I let the woman pass, and then the sweeps were literally on my tail. LITERALLY. In my heart I hope they were pushing both of us to keep the pace, since in the last mile or so they hadn’t said anything else about keeping pace.

“I’m sorry, we have to pull you both off the course.”

We arrived at the halfway point one minute after the cutoff. Even though the outside of my knee was throbbing and my right leg felt like a peg-leg, I was really looking forward to killing that downhill and suffering through the ensuing uphill. This is how you know trail runners are inherently crazy. I WAS REALLY LOOKING FORWARD TO THE UPHILL (I mean, who says that??) but what I most wanted was to finish my second 50K race distance.

Lesson #2: Respect the cutoff. You may cry and stomp and curse people out under your breath, but you must stop and say thank you, even reluctantly, to those who are concerned for your safety and well-being. The people who man and woman the aid-stations are generally very generous volunteers who have given their time, smiles, baked goodies, pickles, peanuts and pork rinds so that those participating in the race can have as “comfortable” and safe a race that they can. We must respect this.

So yes, I was upset. I was disappointed, mostly in myself for not having moved faster. I was sad that I would have to tell my friends, family, and students that I had not finished the race. I was angry that I wouldn’t have another medal to hang from my spin-bike’s handlebars.

Lesson #3: The real lesson in all of this is that I realized that sometimes you cannot be badass all the time, every time. In order to be extraordinary, you must suffer through those ordinary and sometimes painful moments of mediocrity to gain perspective.  Then and only then can you jump back on the path to being extraordinary.

In retrospect, I am appreciative of the DNF, intellectually that is.  Physically, I know I could have completed it had there not been a cutoff, but that is the risk I took signing up for the event. It was a great course, and the 25K (or 15.5 miles as my bib number portended) of it that I did was gorgeous and completely enjoyable. I cannot wait to try the course again next year with both a Garmin and better prepared legs!

If you are keen on running trails in the South, any race that Sean “Run Bum” Blanton puts on is for you. If you have a sense of adventure, a tummy that craves pork rinds while in the middle of the woods, and legs that crave an excellent if slightly masochistic workout, then I’ll see you next year at the Oconee 50K!