The market of GPS running watches has grown significantly over the last few years. Design, functionality, and variability now range the full spectrum of what is possible. Suunto, a market leader in adventure watches introduced the original Ambit almost two years ago. Several months ago they launched the next iteration, the Ambit2 S ($400), offering increased capabilities and moderate user experience changes. 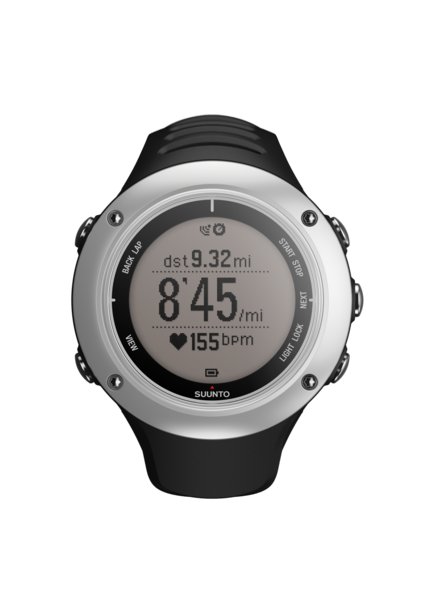 The Ambit2 S is a multi-sport GPS watch, providing functionality for running/hiking, swimming, and cycling. The watch can be worn without tracking functionality as a normal active-wear and dress watch. In short, it’s a good looking watch.

We tested the new Suunto Ambit2 S over several weeks and in as many situations as possible. Three different runners tested the watch in just about every situation we could conceive. From races to adventure runs, roads to the tops of mountains, and from open desert to tree covered canyon trails. We can say with confidence that the Ambit2 S performed admirably. Our testers reviewed specifics about the watch and it’s uses. We rated each category from 1 to 5 with five being the best possible score.

Craig– “The Ambit looks oversized and heavy, but honestly, once it was on my wrist I didn’t even notice it from any other watch (GPS or not) that I’ve ever worn. The band is considerably more comfortable than any other gps watch I’ve worn and the watch sits nicely on my arm.”

Matt– “I used this watch for running, but also wore it as my daily wear watch. It was nice to be able to just head to the trail and fire it right up. Didn’t have to worry about forgetting my watch.”

Mark– “I haven’t worn a lot of GPS watches but have worn a ton of sports related watches. This watch, although bigger than a standard non-GPS sports watch, felt like something I could wear for everyday use. Band did not pinch or rub in anyway. Weight was not noticed. I’m not a big or bulky person and the size of the watch was still sized such that it didn’t stand out to me or anyone around me.”

There were no negative comments regarding fit and feel[/learn_more]

Craig– “Even with the most basic of directions provided I was easily able to change the watch screen layout and functionality. I felt that navigating through the basic functions were simple and straight forward.”

Matt– “This watch is pretty simple to use. There is some setup required online, which will help you customize your watch and give you just what you want and none of what you don’t.”

Craig– “I would imagine that if someone were to use the more diverse pieces of functionality it could get tricky, but for runners alone it’s very simple.“[/learn_more]
[learn_more caption=”GPS Accuracy – 4.0″ state=”open”]
Pros and Cons (responses seem to be the same, both good and bad):

Matt– “The watch generally tracks a little short, but when you upload it to movescount, it does a more in depth analysis and usually ends up adding a bit more. Running with other Garmin wearers, the watch usually ended up displaying about 3% shorter on distance. Usually once the distance is uploaded it’s close to the same.”

Craig– “It seemed to measure fewer miles than my Garmin, but once I uploaded the workout to Strava or Movescount it would adjust them and were nearly identical. Overall the difference wasn’t big enough that there was a concern.”[/learn_more]

Matt – “A fantastic watch. With a few subtle improvements over the Original Ambit, this is an excellent choice if you are in the market for a new GPS unit, especially if you like a watch that you can wear every day that looks great and performs well.”

Craig – “I’ve tested just about every brand of GPS watch currently on the market and can easily state that the Ambit2 S is my favorite, by a long shot. Every aspect of this watch exceeds those of all of watches I’ve worn. I would and have recommended it to fellow runners and am glad to endorse it on behalf of trailandultrarunning.com.”

Mark – “I would really like one of these. Again, while I haven’t used many GPS based watches I have used many sports watches and think this is a really solid product.”

Check out the complete Ambit line at Suunto.com.

Quick Compare between the Ambit and the Ambit2 S

Matt owns the original Ambit and was able to do a comparative review from the first to the second iteration.

“The first thing I noticed immediately was an updated band. It is a bit softer and pliable, making it very comfortable. The review period didn’t give me enough time to test durability, but I wore it 24/7 for several weeks, and have no reason to believe there will be an issue there. I have worn the original Ambit everyday (aside from testing the Ambit2 S) and it has help up nicely.

The original Ambit bezel has a raised ridge all the way around, which looks great, but after time the black paint has worn off to give it a raw silver edge. While performance isn’t impacted, with the Ambit2 S, Suunto has rounded the bezel, which should extend it’s aesthetic life.

A significant and important update was made to the buttons, making them rounder and giving them a lower profile. This makes it much harder to accidentally press the buttons and getting the dreaded mid run pause (this happens to me when my wrist is bent sharply, usually climbing up rocks). With the Ambit2 that is nearly impossible. No help if you pause your watch mid run and forget to turn it back on…

There are a few additional customizations available, such as multi sport mode, the ability to have multiple bike pods calibrated, ANT+™ compatible, or telling the Lock button what it should lock in both time or sport mode.  The Ambit2 S also boasts GPS Altitude, which provides altitude readings directly and without calibration from the GPS data.

If you are a triathlete or swimmer, the Ambit2 S really steps up with a swimming mode, providing distance, duration, pace, stroke count and rate and efficiency (I was not able to test this feature).

I have heard that the resolution is higher on the Ambit2, but I really didn’t notice.

In summary, if you’ve got the original Ambit and are happy with it, like I am, you are probably just fine to hang onto that one and save yourself some cash. If, on the other hand, you are in the market for a new GPS watch and need an upgrade, the Ambit2 S should be a top choice.”