There was a time when running long distances on trails was crazy talk.  With the proliferation of trail races, events, and series, the thought of trail running isn’t nearly as crazy as before.  The mystique of the unknown may still lurk in the background, but the same can’t be said about the intimidation factor.  The mindset has changed.  Weekend warriors and road runners are welcoming the challenge.  They are willing to take the risk to see if they can tolerate the distance. 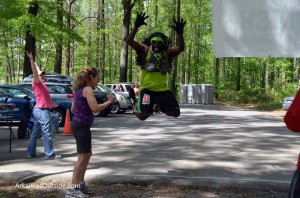 I want to be a cool kid!

Witnessing half marathons and marathons selling out in rapid succession isn’t unheard of, however, the same does not hold true for trail races.  Only recently have races been filled to capacity.  Lottery systems have had to be implemented.  People are rushing to get into races that could ultimately become their demise.  The days of crossing a marathon off the bucket list have passed.

Ultra races are what the cool kids are doing these days.  For what other reason would someone put themselves through the rigorous demands that these types of races require?  The next time you toe the line for a trail race, take a look around.  You may be a seasoned trail runner, but odds are there is someone embarking on the quest for the first time.

Beautiful scenery, the openness of the outdoors, and camaraderie are a constant draw to the novice.  Getting away from it all is obviously possible in any setting, but pounding on the pavement in no way compares to losing oneself on the trails.  Usually all it takes is for someone to do one trail race.  The distance doesn’t matter.  One may start with a 4-mile run and eventually progress to a 100 miler.

distances vary in trail and ultra running enough to easily hook someone.  The Ultra Trail Series, put on by the Arkansas Ultra Running Association, has come to an end for this year, but will soon commence in July with the Full mOOn 50k/25k.  It’s a great place to start the journey and many, including myself, have it to blame for my current addiction.  If there is one race in the state responsible for the most first-timers running longer than a marathon on a trail, the Ouachita Trail 50 is the culprit.

Part of the TrailRunner Trophy Series, the OT 50 has the option for 50 miles or 50 kilometers.  Picking your poison can be done beforehand or at the 50k turnaround.  The generous time limit of 13 hours makes it very appealing to first-timers.  It’s not an easy course, but having that much time makes the goal of finishing attainable.  Enduring the pain comes later.

I don’t know exactly how many first-timers there were at the race, but I know of at least ten total.  Of the ten, Tina Ho, was the only one that completed her first 50 miler.  The Notorious Nine are Bill Dobbins, Kelly Frantz, Christi Hill, Corina Miller, Lisa Mullins, Ginea Qualls, Jonathan Quinn, Kristen Sterba, and Sam Wilkerson.  Congratulations to them all and welcome to the addiction!

2 Responses to No More Trail Intimidation