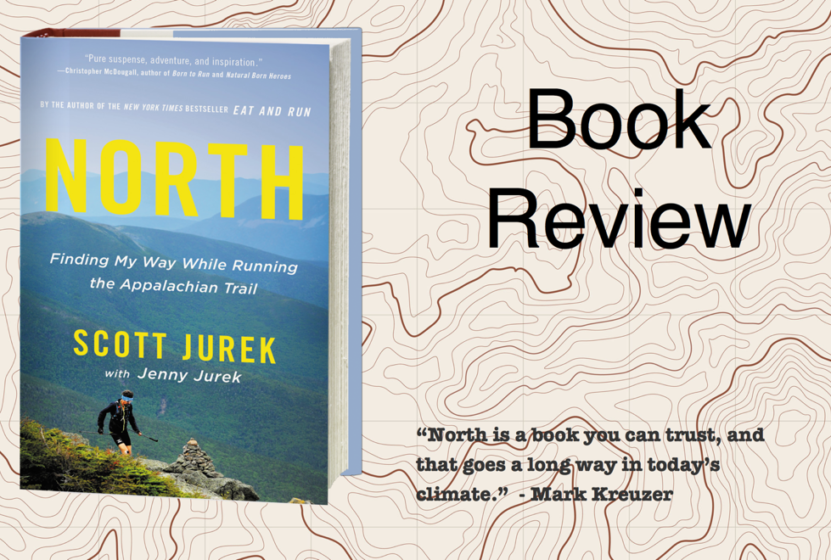 Without being too philosophical or cynical, the recounting of facts and telling of history has come into question over the last few years.  Because of this, it’s seemingly difficult to know how much embellishment, or even straight up fabrication, is included in anything you read.  In the case of Scott Jurek’s new book, North, about his 2015 Appalachian Trail FTK, my own experiences with Scott track very closely with the storytelling by both Scott and his wife Jenny. Scott’s politeness and his missing drive, as discussed in the book, were both things I’d been witness to (prior to his AT FKT). Along with Scott’s reputation for being exceedingly genuine, my contention is North is a book you can trust, and that goes a long way in today’s climate.

North’s format moves chronologically from the AT FKT attempt conception, to planning & prep and onto the 46+ days themselves.  Scott and Jenny share the storytelling with Scott writing 80 or 90% of each chapter and Jenny following up with her own experiences, memories, and feelings from the same period. Both Scott and Jenny excel at writing; their styles are engaging, clear and flow easily.  Together they are open and honest, if not raw, in North. Scott and Jenny reveal much about themselves with a significant number of accounts which are not flattering, mostly for Scott. It was especially eye-opening to read Jenny’s accounts; she did not make it her job of writing to build Scott into a hero.

The book does a solid job of explaining the challenges of the Appalachian Trail along the horrific weather that seemed to plague them throughout.  While the entire adventure was a true beatdown, I grew tired of reading about the never-ending difficulties. The redemption, and what most captured my attention, were the countless ‘rescues’ from friends and newly made acquaintances. As Scott and Jenny both acknowledge, the AT FKT was a team effort.  This is where I say books are like buffets… you may not enjoy everything that’s there but take what you like and leave the rest. For me, North spotlights the essence of ultra running and it’s community. Not only does it show Scott, who worked and ran incredibly hard day after day, but my favorite storyline was about people who were there for him.  People who selflessly showed up to crew, pace or volunteer. On its own running, ultra running is impressive but it’s the strength and commitment of the community that makes ultrarunning truly amazing.

North by Scott and Jenny Jurek ends up being an engaging book that is a perfect one week read and sure to give you a few good takeaways.