Pinhoti 100-miler held in the “Deep South” (Talladega National Forest of Alabama) was a late season addition to an already ambitious 2012 race calendar.  I had heard good things about Todd Henderson’s point-to-point trail race, and being that the event was now part of the Montrail Ultra Cup series, I felt that it was a good opportunity to nab a slot for Western States 100 in 2013.  It would be the first time visiting the home state of the original ultra runner Forrest Gump! (How many times have you heard the “Run Forrest, Run!” joke?)

Despite getting some funny looks from people after telling them I was running another 100-miler I made my way down south, and was looking forward to one last long run in the sun for the year.  I had a goal, a plan/strategy, and after hearing that fellow Oregonian Timothy Olson would not be running, I liked my chances.  The rules of the Montrail Ultra Cup state that the top two men and women from signified races will gain automatic entries to Western States.  If one of the top two already has an entry then it will roll down one slot.  I knew that there were a couple “thoroughbreds” toeing the line (Neal Gorman and Jeremy Humphrey) but I didn’t recognize too many other names.  I also knew (from battling w/ him a large part of the day) that Neal already had a slot from being in the top ten in Western States 2012.  All that I would have to do is remain in the top three and I would have it wrapped up.  With people as eager as me to go to the “Big Dance”, and people coming out of the woodwork every race it seems, it would be easier said than done!

I felt grateful to be so far from home but to have some familiar faces to help me out along the way.  Those faces were friends Ken Sinclair and Amy Freeman who were mainly crewing for the amazing Denise Bourassa.  They were also nice enough to scoop me up for a ride to the start line and Denise and I talked game plan in the back seat while in-transit.  Little did I know that she’d be hunting me down six hours later!  More on that in a minute…

The pre-race meeting the night before gave way for some pretty cool interactions.  First and foremost, a few months prior to Pinhoti 100, I was contacted (via Facebook) by an old schoolmate (Chuck Hannold) that I haven’t seen since early in my 10th grade year of high school in Pennsylvania.  We figured it to be 1993 and about 18 years since we’ve seen each other. It was awesome to re-connect and “catch up” and it’s amazing how quickly time flies.  If you had told us that we’d both be running 100-milers through the trails and mountains back in 1993 we would have thought you were “ultra crazy”! 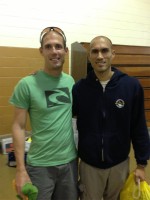 Another pretty funny interaction (that I was not used to!) happened when I walked in to the packet pickup line.  They had a stack of the UltraRunning Magazines (November issue) with me on the cover on a table amongst other goodies.  One of the women behind the counter saw this and came over and asked me to sign her copy…and then another person, too, and it just kind of felt awkward to me.  I don’t see myself as someone that should be signing autographs…but pretty cool nonetheless! 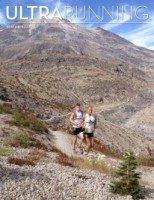 We finally made our way down to the start line in the dark and cold, and there is just a shared anxiety within a large group of like-minded “crazies” that are about to embark on a 100-mile journey.  I gave Chuck some words of encouragement and said some “good-lucks” to Denise, Neal, Jeremy, and others before race director Todd Henderson sent us off.  I thought about what 100-mile veteran Jeff Browning told me about just staying relaxed the first 50 and like I said I had a plan/strategy. 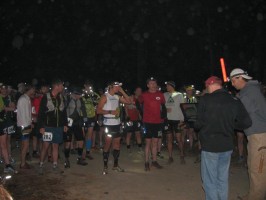 Miles 1-10: Jeremy took off and the pace was a bit quick for me. Thankfully I had to stop off to use the bathroom (bushes), and this gave me an opportunity to just settle in to my own steady, relaxed pace.

Miles 10-30: I remained in 3rd place behind Jeremy and Neal, respectively, and I was getting updates that I was about 10-15 minutes behind at this point.  During this part of the race we started hitting some heat and humidity (which I am not accustomed to) and we were approaching the biggest climb of the race (2,000 foot climb over Mt. Cheaha).

During the ascent up Mt. Cheaha I definitely slogged and slowed down considerably.  I ran out of water at this point (mostly from pouring it on my head) and felt a little dehydrated because of this.  At the top and at the aid station I asked Ken, “how far is the next guy behind me?” He answered, “It’s not a guy…it’s Denise! and she’s 10 minutes back!”  This really lit a fire under my behind!  I pushed onward and tried to just focus on opening my stride on some of the more open trails.  My transitions were quick and even though I felt rough at times I never got too low.

After the sun started lowering I started to feel a little better.  Ken was extremely helpful and even lent me a headlamp just in case I didn’t make it to my drop bag in time.  Just seeing him and Amy and getting some updates helped me realize that I was holding steady, and their encouragement really made a difference for me.  At around mile 70-ish and the final significant climb of the race (Pinnacles) I looked down the mountain into the darkness and saw a headlamp!  I yelled out loud to myself and again a fire was lit under my behind!  I actually got a little angry that I let this happen and I told myself that I was not going to get passed in the final 25 miles and let that slot slip away from me like I have done in the past.

(Pluggin’ away one mile at a time…- Photo: Scott Livingston)

Every little rolling hill invited me to walk but I thought that whoever is behind me is probably running those to try to catch me.  I dug extremely deep and pushed the hills as hard as I could.  I hammered the downs even harder.  At mile 95-ish and hitting some roads I would be lying if I said I didn’t look over my shoulder a few times but continued to plod onward as best as I could.  While playing a little mental game with the clock I knew it would be close for me to break 18 hours.  I pushed and pushed but eventually realized that I was going to come up just a hair short.  I gave one last look over my shoulder and came into the track at the high school in 18 hours and 2 minutes.  I was deeply satisfied with executing my plan and accomplishing my goal.  I was able to put about 20 minutes on the person behind me (Mitch Pless…who ran a heck of a race).  Running scared is a great motivator! 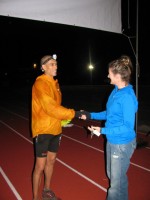 I was handed a buckle and greeted by volunteers and 2nd place Jeremy Humphrey who I apparently was closing in on as well.  He and I were both excited to be heading to Western States 100 in 2013 and happy to be finished with a deceptively tough Pinhoti 100 course.  In hindsight I would say that the heat and humidity really wreaked some havoc on runners and made for a little bit slower times (especially on us Pacific Northwest runners).  Another challenging aspect was that being that the race is held in November the leaves were all on the ground and covering rocks and roots for large sections.  This became a little more precarious in the later stages of the race when your body and mind are fried!

The course was beautiful, very well marked, and the aid stations were abundant with food and helpful volunteers. Thank you so much to Todd Henderson and his wife, and his large crew of friends and volunteers.  This is definitely a down-home southern hospitality event and a race that shouldn’t be taken lightly.  I’d also like to thank my sponsors that help me stay healthy and strong, and that make it much easier for me to do what I love!  Big congrats to Denise who won the women’s race, and to everyone else that attempted and/or finished Pinhoti 100-miler!

See you at Western States!

Full Results can be seen HERE