Fight the Tummy: My Leadville 100 Experience 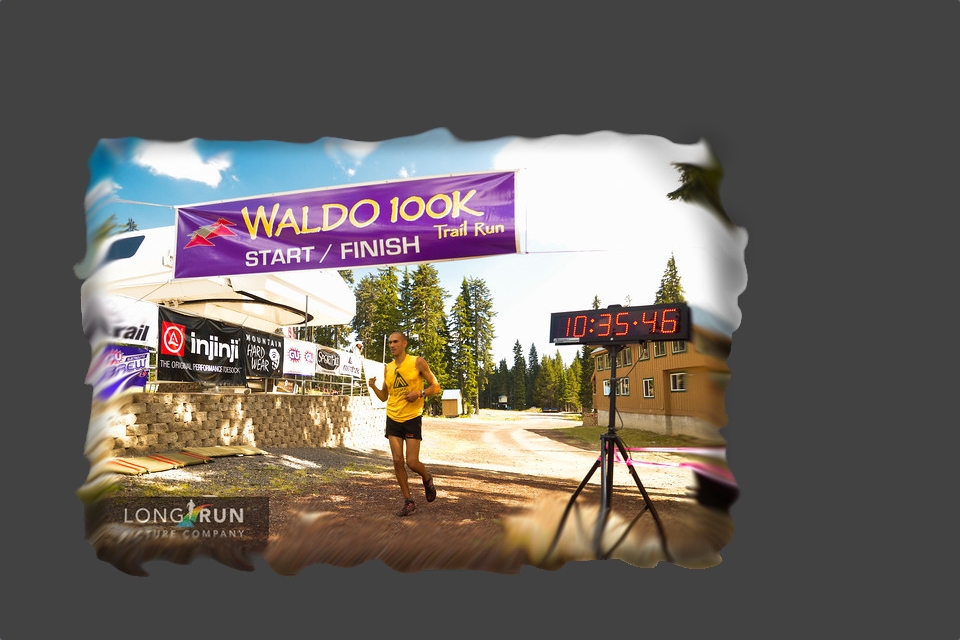 Waldo 100k is definitely going down in the history books as one to remember.   A few days before the event race director Craig Thornley announced (via the Forest Service) that there was a wildfire smoldering and burning close to sections of the course where we would be running.   The way in which Craig and his crew handled the situation was professional, transparent, and much like getting through the unexpected challenges of an ultra, they “rolled with the punches.”   It was nice to see these characteristics firsthand and it is surely an experience that will prepare him for his duties as the impending Western States 100 RD.   He kept us up to date with messages and eventually announced a plan of a course re-route..   Once we were given the “green light” Willie and I hopped in the car and headed for Willamette Pass and the 2012 Waldo 105k!

This was my third running of this event (2009, 2011), and if asked, I would have to say that it is probably my favorite ultra out there as of right now.   The time of year, the people, the views, and the amount of singletrack are just a few of the many reasons I keep coming back to this race.   It’s also nice to re-visit an event multiple times because you remember sections and are able to somewhat guage your efforts based on past years times and splits, etc.   Although this year certain aid stations would be off because of the course changes, but I was still able to guesstimate times and recognize parts of the beautiful and expansive forests.   Much like the other Montrail Ultra Cup races this one had some fast and fit guys ready to rip despite the last minute drops of Joe Uhan, Hal Koerner, and Nick Triolo.   You can read more about the race preview HERE.   We definitely had a good crew from Animal Athletics heading down from Portland and were super excited (and a bit nervous) to tackle the epic course.

I knew that Jacob Rydman had been training hard and was gunning for a Western States spot, but I was a little surprised when he took it out pretty hard.   It wasn’t long before Timothy Olson went after him up the long dirt road climb in the dusty darkness.   Ian Sharman, Scott Wolfe, Joelle Vaught, myself, and a couple others mixed in some power hiking and running until we eventually hit the trail.   The two prior years that I ran this race I coincidentally hit the first aid station in 67 minutes both years.   I wanted to try to be right around there and was very surprised and a little worried when I got there in 64.   From that point on I knocked it back a little as we climbed Fuji as I knew we had a long day ahead of us, and wanted to (needed to) save some for the last bit (and toughest part) of the race.

Just before Mt. Ray aid station (mile 20.5) I heard from someone on the trail that my buddy Ian Sharman was going to drop out.   It didn’t terribly surprise me as he has been running hard and often as of late.   As I came through the aid station friend and Rudy Project team manager Keira Henninger (who was crewing for Jesse Haynes) handed me my extra bottle and I blazed right through without stopping  . I caught glimpse of Ian over at a table but didn’t hang around to see what was happening.   I wanted to ride the wave of feeling good and hoped for it to take me a long way down the trail and through the mountains!

The next chunk of the race was part of the re-route and I really liked this stretch of singletrack.  I ended up passing Jesse Haynes during this time and there were some long, very enjoyable, and easy-running sections.   Being in third place overall behind Jacob and Timothy respectively and getting updates that I was ten or so minutes behind left me feeling quite motivated. 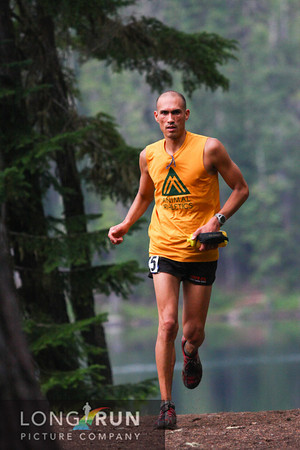 Characteristic Oregon drizzling rain kept us runners cool for the first several hours of the race and I thought about how it was good for the wildfire, too.   Then the sun eventually burned it off and the temperature started rising.   The miles were clicking by and before I knew it I was back at the Gold Lake Aid Station at approximately mile 50.   I had gotten there in a relatively fast time and I felt that I had pushed some really good sections of downhills…not expecting anyone to roll up on me.   Then all of the sudden as I was leaving the aid station I hear a volunteer say, “runner!”— It was fellow Rudy Project team member Jesse Haynes coming in looking strong as ever!

I took off up towards Maiden Peak and the toughest part of the race.   Eventually Jesse caught up to me as I was running the ups pretty slow by now and we ended up working together.   This isn’t the first time this has happened; we ended up linking up together at Bandera 100k last January in Texas, too!   Once we made it to the base of Maiden Peak I was already sweating profusely and pretty worked inside and out.   We re-fueled and mustered as much energy as we could for the huge climb that was ahead of us.   It’s about a 2,500 foot climb in three miles and there aren’t many switchbacks—it’s basically straight up the mountainside…and some parts are just downright silly!   Jesse is a phenomenal hiker (said he learned it from his girlfriend and 2012 Angeles Crest 100 winner Keira!) and I tried to hang on behind him.   Sometimes he would open up a little more of a lead on me and I would dig really deep and run to catch up.   We continued this cat-and-mouse all the way to the top, and once we hit Leap of Faith we were side by side.   I thought that it was very serendipitous that we made it to the top of Maiden together and were able to share that with one another.   The views from this 8,000+ foot mountain are so ridiculously breathtaking and we are afforded views of the many lakes (including Waldo Lake) and surrounding mountains.

Then it’s down we go!   Jesse let me take the lead down Leap of Faith, which is a very technical, silty and sandy “trail” to the next aid station (Maiden Lake).   As I was descending quite quickly I lost focus for just a few seconds and I yelled, “I lost the trail!”– Then I hear Jesse say, “It’s over here!” which was about twenty feet to the left of where I was.   I quickly scurried back over there and got back on to the trail but, unfortunately, never saw Jesse again!   All that I saw was the dust that was still in the air from him flying down the mountain. 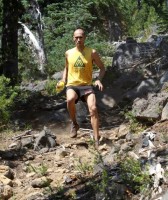 Before I entered Maiden Lake Aid Station and the last one on the course I checked to see what I had on me in terms of calories and fluid.   Four gels and about 8 oz. of GuBrew.   I decided that I was going to blow through the last aid station and go after Jesse.   The race for third and the Western States spot was on! As I passed through I saw Dan Olmstead and he ran along side of me for a second and encouraged me on.  I pushed hard and knew that a large part of this section was downhill.   Jesse seemed to be doing much of the same because I was getting updates that he was either maintaining his distance or putting a little time on me.

After a few miles I started running low on “turbo”, my legs were hurting, and I just felt pretty worked.   I saw my friend Brittany Loper out on the trail ahead and we ended up running a mile or two together and that really helped boost my morale.   I quickly splashed my head in a stream and felt re-energized and charged all the way into the finish line to see three studly ultra runners waiting for me.

Timothy Olson ended up catching Jacob and beat him by a few minutes but Jake ran a super gutsy race for 2nd and a WS100 spot.   Jesse and I had a really great battle out there and I am super happy for him to run at Western States, too.   I came in 4th overall with a time of 10:35 which I am extremely satisfied with.

On the women’s side Joelle Vaught crushed it again, and Denise Bourassa, and Alison Bryant rounded out the top three.   These women are so impressive and it so inspiring to share the trails with these amazing athletes.   What is even more astounding is the people that really gut it out on a tough course and make it to that finish line.   You know who you are!   I understand that there are days where people are unable to make it and it is humbling and a good learning experience.   On the flip side there are people that overcame so many obstacles to complete the mission, and much like the race directors dealing with the fire, they rolled with the punches to make it happen.   Well done everyone!   Really inspiring to be at that finish line all evening.

Many thanks to Craig Thornley, Meghan Arboghast, and all the selfless volunteers.   This race is top notch and I am so stoked to get another Waldo hat and finish.