On my first attempt to complete the Wasatch Front 100 Mile Endurance Run 2012, I had decided to quit at mile 65. I was walking up the road to the next aid station, where I intended to sit in a chair, get warm, and call my wife to take me home.

With the decision to quit, I was no longer moving with a purpose other than to get to where I needed to be to quit. Other racers and their pacers passed me, and I envied them. Each one asked if I was alright. I complained of not feeling well. One of them told me in sincerity, “Don’t quit. You will get it back.”

I did not believe him. 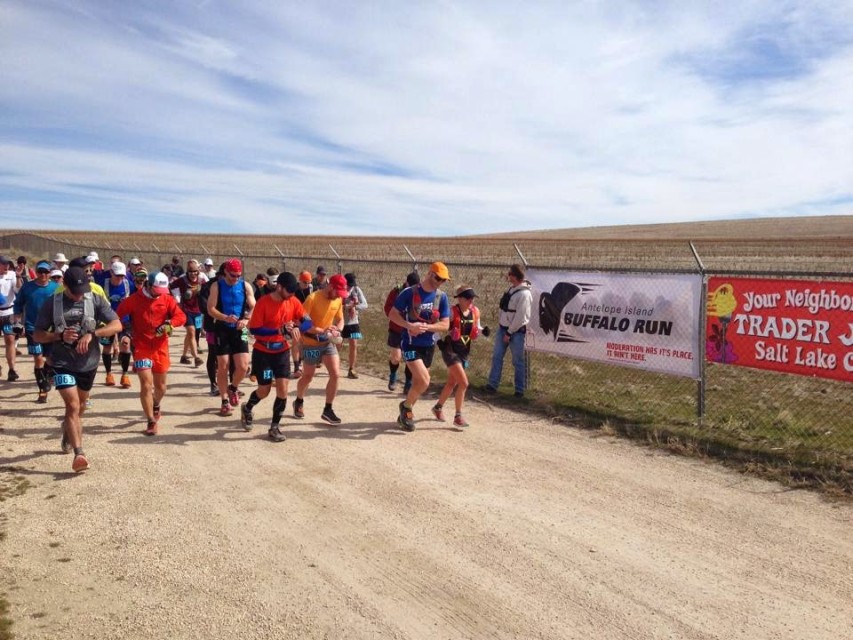 Start of the 2014 Antelope Island Buffalo Run 100 Mile. There were a few early 50 mile starters in the group, including my older brother Peter. At 12 noon Jim Scaggs drew a line across the dirt road and counted down. ‘Run you fools!”
Photo: Joe Dean

The sun had gone down and I felt cold. I looked forward to sitting near a heater, pulling a blanket over me, and sulking in regret. On the last hill before the aid, a vehicle coming toward me stopped, and Davy Crockett jumped out. He immediately assessed my condition, ignored my complaints, then addressed my immediate needs. I sat in a chair, he pulled a heater close, brought me food, and helped me dress some stinging, watery blisters. Then I got up, walked out, and finished the race.

I got it back, as promised. 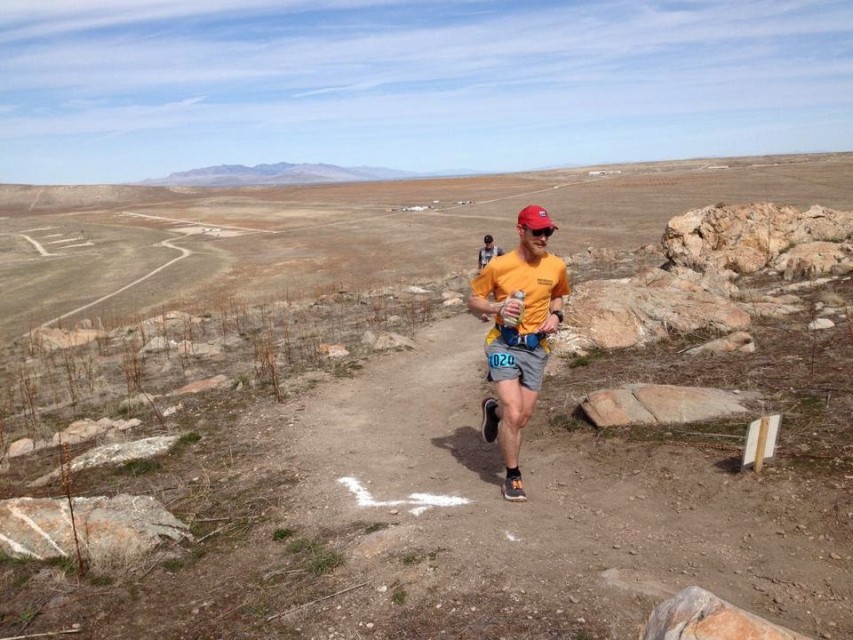 First Mile, All Smiles.
Experienced 100 mile racer Jeremy Bradford and I lead out the 100 mile runners. Jeremy stayed close through the first half but had to drop out due to an injury.
Photo: Kelly Agnew

I used to hate running. There was a brief season in middle school when the physical education teacher had us running laps around the school track. The mile run was to me the ultimate distance. I remember how it hurt, how it intimidated me. I even competed in the mile race in the ARCO Jesse Owens Games one season. After that. I stopped running. I played no sports in high school, nor did I do much of anything productive throughout high school. I must have slept for months. I became severely depressed and acted out in foolish ways. I hated myself. 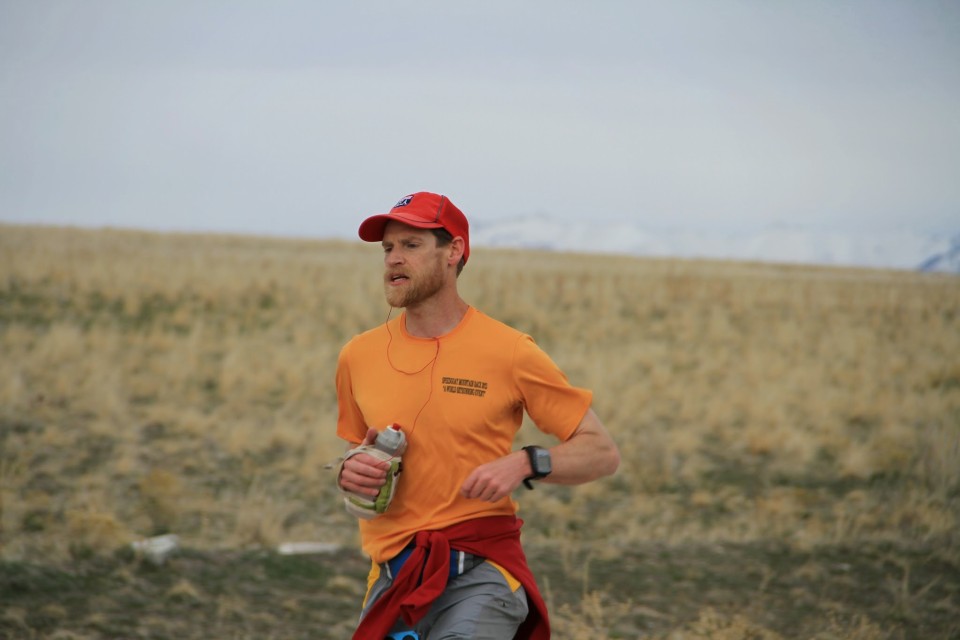 I lost friends and became isolated from family. I wanted to disappear completely. I dropped out of school at age 17, and wandered through young adulthood with no future plans. My parents, struggling to understand, and praying for my life, did anything and paid anything to help me get on my feet. I saw a therapist for several months. In each hour-long session we discussed what was on my mind, what I was afraid of, and what I wanted. He taught me to Identify irrational fears. He taught me positive self-talk. He taught me also that physical exercise will destroy depression. He encouraged me to go out and try it. So I did. I had a bike and I rode trails. I hiked. I swam in the reservoir. I was alive again. I earned the GED, then enrolled in college courses. I graduated university with a B.A. in History. I married a beautiful and special young woman, and became the father of two boys. The three of them are the light of my life. 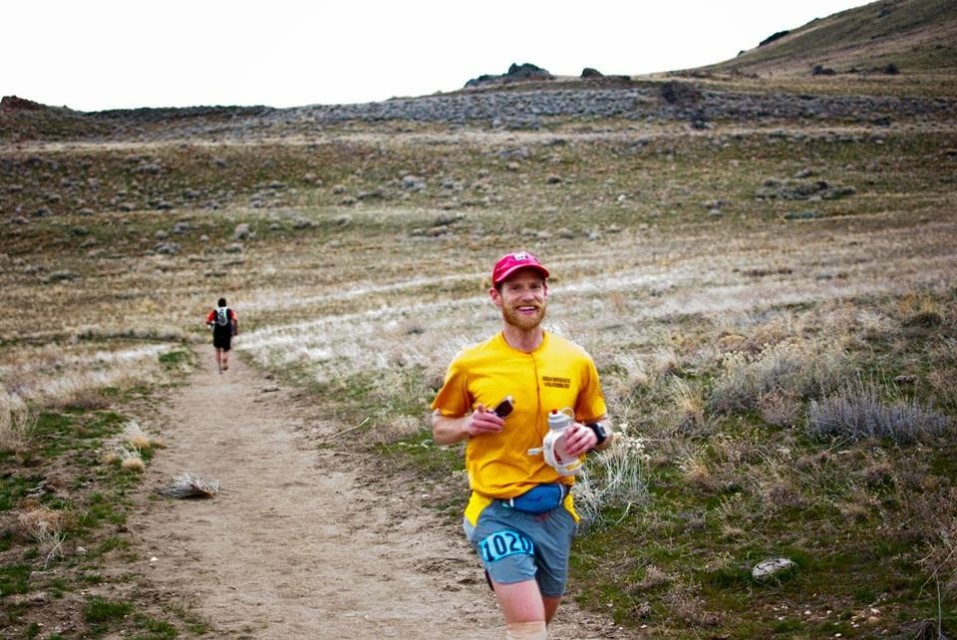 “No time to chat!” I did not stop at most aid stations, just ran through them. A let-down for my friend Brenden who came out to spectate his first ultra sport and maybe chat about music or history.
Photo: Brenden Rensink

Through my 30s I stayed physically active and became familiar with the Central Wasatch mountains and canyons. I built my leg strength in day-long ridge scrambles and dozen-mile routes. I pushed for greater distances with my hiking partners until it occurred to me that I could go further if I learned how to run instead of hike. Some of my hiking partners where ultra-runners. One man, who goes by the name Grizz, had astonished me with his strength, speed, and endurance as he topped the highest granite Wasatch peaks. And he was in his mid-sixties! He had run and finished the Wasatch100 eleven times. I wanted what he had. I began to run instead of hike. 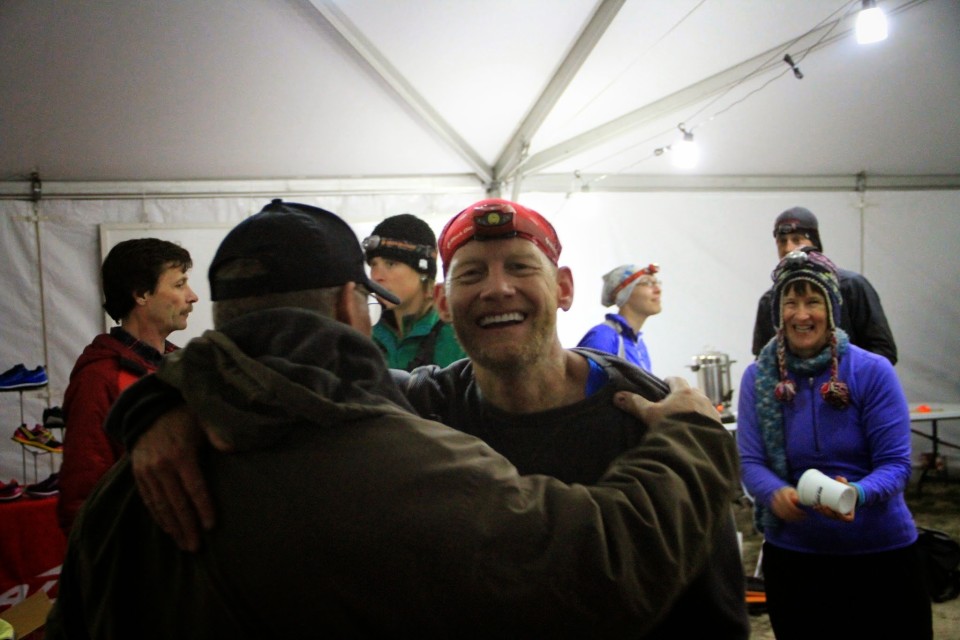 My brother Peter Van Horn running his first ultra, the 50 mile Buffalo Run. Peter was burned a third of his body in 3rd degrees in a work accident several years ago. He finished the 50 miles in 8:46.

Two years ago I marked my 41st birthday in the middle of the night, at mile 56 of my first 100 mile race, the Antelope Island Buffalo Run. I finished later that morning in a time of 23 and half hours, for 12th place. My wife and boys, and parents were there to welcome me in. I returned the next year and ran it better, capturing 5th place. 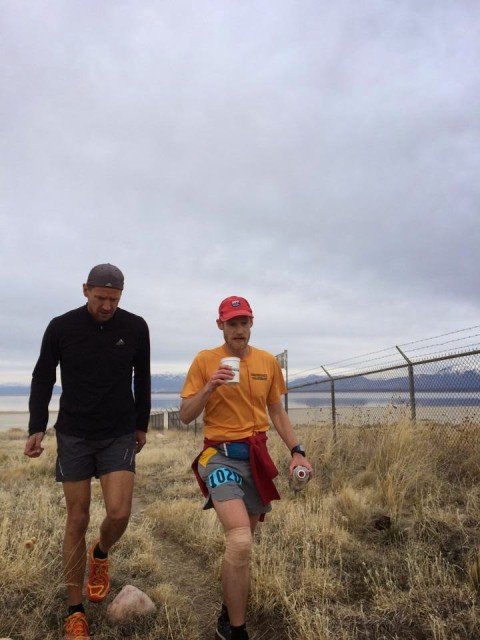 Everyone struggles. Everyone has good days and bad days, and many more days that are merely “meh”.  Sometimes we lose sight of who we are, believing that our present struggle will define us for entire lives. Sometimes we give into irrational fears and hide, or go to sleep. Sometimes we hate ourselves for what we perceive as failure. Sometimes we go for years believing there is no way to change. 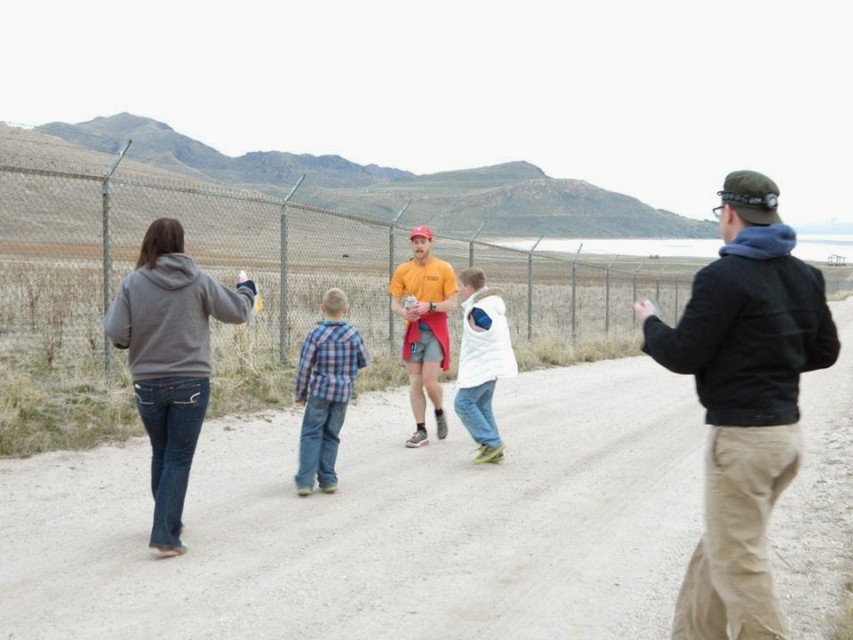 Sometimes we get a glimpse of those who love us, whose hearts bleed for us. Sometimes they walk with us to the next aid stop, bind our wounds, get us fed and warm, and do everything they can to get us moving again. They can’t carry us because it is our journey and we must each walk it, or run it if we can. 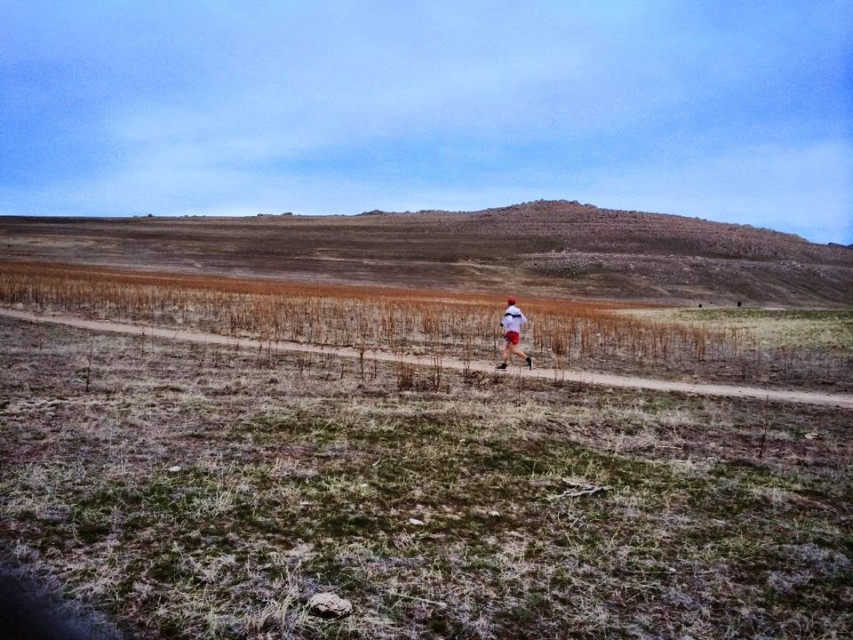 Going back for the second 50 miles

And sometimes, if we work hard, and if we want it bad enough, sometimes we win. 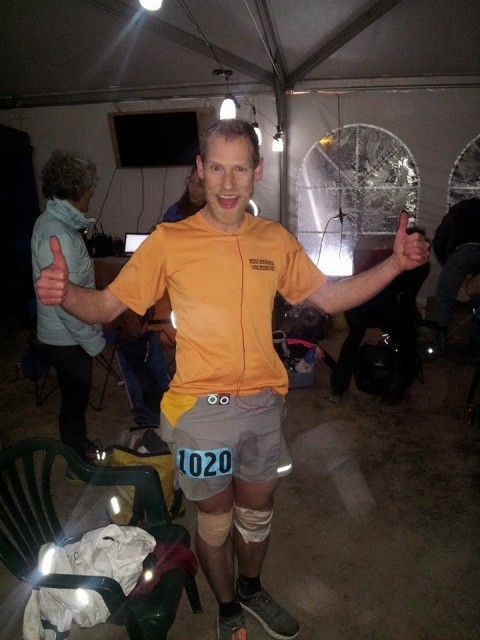 I’ve observed that as in a hundred mile race, in which I experience highs, lows, and every sensation in between, in life I will follow much the same pattern:

I will savor the days when I feel strong and fast.

When I am low, all is not lost. It is not time to quit.

I trust the words I heard on the road up to Big Water at mile 65: “Don’t quit. You will get it back.” 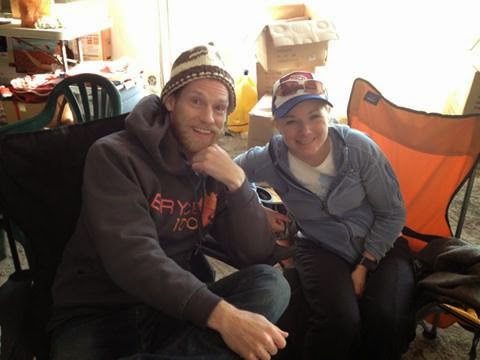