Miles 2 Give – Ultra Running for Sarcoma cancer research and awareness

Landon Cooper is the tattooed man behind Miles 2 Give, the ultra running charity raising money for Sarcoma Cancer research. Images and symbols inked on his shoulders and arms create a visual cacophony of motion.

Sarcoma is a cancer of the bone or soft tissue. 60% of sarcomas are soft tissue, meaning that fat, muscle, nerves, ligaments, joints, blood vessels or lymph vessels are affected. It comprises about 1% of all cancers in adults and approximately 15% of all childhood cancers.

Landon, John and Ryan are not only raising money and awareness of the disease; they’re meeting with people affected by cancer, visiting hospitals, talking with doctors and dedicating each and every day of their run to a person with Sarcoma. The stories and signatures they collect are inked on the inside of their RV, a visual reminder of what their forward motion across the U.S. is all about.

To look at them one would think they were life-long friends. The truth is they were strangers just hours before the journey began. Each has a giant-sized personality with compassion oozing from every pore. They are brothers running for something much bigger than themselves, giving their heart, soul and athleticism to this journey of a lifetime.

Last week I was fortunate to meet the team during a pit stop in Colorado. They’ve already run 1400(+/-) miles, with a mere 1600 (+/-) to go. Ultimate Direction is the official hydration sponsor for Miles 2 Give. Buzz Burrell, world-class trail runner and Brand Director of Ultimate Direction, hosted the meet-and-greet run and lunch.

After introductions the group was invited into the RV. The faint smell of incense covered the odor of sweaty gear. Ryan pointed out the two beds in the back and the table area that folds into a third bunk. Stickers from various sponsors dotted the walls but it was the ink on the walls that captured our attention.

Motivational messages from family and friends of Sarcoma victims and survivors cover cabinets. Sentences from people that ran during the latest 2013 Boston marathon and are determined to return are etched over the passenger seat in the front. Words of inspiration, dedication, praise, courage and tenacity are everywhere, reminders that there is utter courage in the human spirit and every person is capable of positively affect lives in simple, ordinary ways.

Our group hit the pavement and we ran, settling into easy companionship as we exchanged words and stories. As is typical of runners, we dialed into an easy talking pace and the miles flew by. The run was over in the blink of an eye. It was time for lunch.

I offered to drive a few people to the restaurant. John and Ryan jumped in with me. I started the car and immediately Ryan noticed my stereo display with the word “DANCEBREAK”.   I explained that it’s the auxiliary for playing music from my iPhone. They wanted to hear the last song I had played en route to the run, so I quickly plugged in and cranked the volume.

“Some Nights” blasted from the stereo and seconds later the cheer was deafening. John looked at me in amazement. “That’s our theme song!”

We grinned with utter happiness; no matter if you start running in Ocean City or Boulder, CO, the words and sentiments are still the same.

“Well some nights I wish this all would end

Cuz I could use some friends for a change

And some nights I’m scared you’ll forget me again 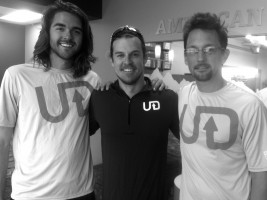 Miles 2 Give not only raises money for Sarcoma Cancer research.  It connects people and places and hearts with words born from motion. The words etched on the walls by those touched by the journey are universal, and the motion is always forward.