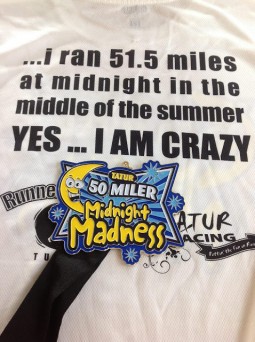 More 5ks happen on the Fourth of July than probably any other day of the year.  It’s a time to celebrate!  After the race people go to the lake, grill hot dogs, or relax and enjoy a day off.  Happy Birthday, America!

That’s what normal people do.  Ultrarunners are far from normal.  While the sane people were relaxing this year, a group of 125 runners were preparing for the Tulsa Area Trail and Ultra Running (TATUR) Midnight Madness 50-Miler.

The thought of putting a 50-miler in July in Tulsa, OK is maddening.  Running the entire race on pavement is one thing, but the heat in years past has been something that has concerned runners.  The lure of ultrarunning can be tempting.

The course makes good use of the River Parks Trail System as part of its 10.3-mile loop.  The cut-off time is generous giving runners 15 hours.  With temperatures in the low 80s and a brisk breeze throughout the night, it had to have been the best temperature this race has ever experienced.  In the last three years the average finishing rate has been around seventy-five percent.

Course record holder Katie Kramer and last year’s winner, Nick Seymour set the pace at the beginning of the race.  Katie came through on her first lap just under 1:18.  Nick wasn’t far behind and by the time they came by for their second lap, they were together at 2:38.  Katie dropped after the third loop leaving Nick in the lead by himself.  It was a lead he would never relinquish.

At the start/finish area a breeze was present making it somewhat chilly throughout the night.  According to a runner that was the only place a breeze existed as reports were coming in that it was humid and muggy.  Staying up all night can be a challenge, but having to do it and run is not normal.  Being up at stupid o’clock does a number on your brain if you’re at home on the couch.  Imagine what it does after 30 miles.

Although I was not running, I was on hand to crew and support a group of Arkansans.  Some were veterans on the course while others were anticipating the monotony of five loops.  At least the loops were alternating and the gnats would be there to keep them company.  A couple of them returned to settle the score with their Midnight Madness adversary.  Finishing seemed unattainable at times, however, every Arkie slayed the beast in the end. 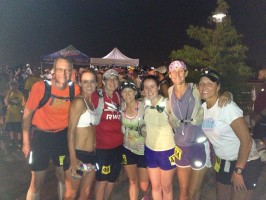 A motley crew of Arkies.

The cool, breezy temperature may have last through the night, but as the sun started to rise, the temperature rose along with it.  I wasn’t moving and I was hot.  Having paced someone on the course during the last lap last year, telling you it’s hot isn’t enough.  It was a type of sweltering heat that can only be relieved with something cold.  Luckily for the runners, an ice bath awaited them at the finish line.  Deb Baker, one of the Arkie runners, told me it was her motivation to finish her last lap.

With a better temperature than previous years and two past winners running, I knew the course record was going to be broken.  I also knew it would be under 7 hours.  Nick Seymour did not let me down in my prediction.  He rounded the final corner crossing the finish line in 6:51:56 breaking the previous course record of 7:01:54 set in 2011.   He finished almost 35 minutes faster this year.  Next up for the back-to-back champion is the Leadville Trail 100.

Nathan Sicher finished behind Nick for the second straight year.  He cut off nearly 20 minutes from the previous year.  First-timer John Gignac seemed to surprise himself with his third place finish in 7:45:38.  I supposed that’s what happens when you decide to run a 50-miler at the spur of the moment.

Jenn Overmeyer went from sixth last year in 10:49:39 to first this year in 8:50:35.  Whoa!  I told her whatever she is doing in her training is working.  She replied,  “I’m over-training and sleep deprived.”  She was talking about running the next day.  I told you these people were not normal.

Arkie Tammy Walther was the only other woman to go sub-9 with a 8:56:55.  She bested her 10:14:09 time in 2010.  Suzanne Marchesano ran a 9:13.46 to finish in third.  She made quite the trip from Greenland, NH to participate in the race.  There is no way it’s as humid up there as it was in Tulsa.  She’s reiterating my belief in the insanity ultrarunners posses.

At eighty-five percent, the finishing rate this year was better and there were more total finishers.  Not sure if it was the cooler weather at the start or experience that produced faster times.  Either way, everyone finishing this race or attempting to finish it needs a psychological evaluation.  No age perquisite exists for insanity.  Cameron Plate, 11, finished in 11:20:57 and his brother Brandon, 13, came in at 11:47:33.  What is in the water in Tulsa and how come I don’t have any?

Are you one of those crazy ultrarunners, too?  Please, get some help.  It’s out there…somewhere.