I started running almost 9 years ago. During the first few years, I experienced incredible strides in my progression, both in distance and in speed. With progress came success, both with personal goals and on the podium. I hadn’t quite grown to an ‘elite’ level, but from a local perspective I was becoming known as a competitor and producing results worth noting. On only a few occasions did I experience lack-luster performance or outright failure. So going into 2013 my confidence was peaking and goals were set high.

Then, the compromises began.

In an early season 100 mile on Antelope Island, UT I faced difficult weather conditions; cold, windy, and slight rain flurries throughout the day and into the night. Going into the halfway point and the end of the first lap (a two-lap race) I was on target to achieve a personal goal of going sub-17 hours. But early in my 2nd lap I started experiencing diaphragm cramps and struggled to purge them. At the 100k mark, I was still on my goal time and had the opportunity to dig deep, go further into the pain cave, and achieve an aggressive goal. Yet, thoughts of the uncertainty of dealing with the cramps for the rest of the race, frustration with the weather, and a deepening anger with a slowing pace began to insert doubts into my head. Those doubts and frustrations led to a compromise – “sub-17 isn’t a big deal, sub-18 is still a huge PR and an awesome time”. Then – “just get a PR at 100 miles, who cares, no one will care but you anyway”. And finally – “just finish, it’s fine”. A friend ran back on the course until we met up and ran me in the last two miles, forcing me to suck it up and still go sub-19 and a 20 minute 100 mile PR.

There was nothing in this race that should have ultimately stopped me from reaching my goal. It was my own brain and the willingness to compromise that allowed me to come up short.

A few months later I was racing again, this time the Speedgoat 50k, arguably the toughest 50k race in the country. I had gone into the race better trained than ever for a steep mountain competition. I also knew that the race was serving a brand of energy gel that didn’t work well with my stomach. I took along several of his own gels to offset the need to use as many provided by the race. And then the compromise – “spread out your own gels and periodically use those provided by the race and you’ll be fine”. I knew better…I should have prepared better. Instead, those gels wrecked my stomach by the halfway point and I found myself nearly unable to eat all together. Because of that the pace slowed, legs were heavy, and I found myself dealing with issues I would normally avoid with ease. A disappointing finish was starting to weigh on my race confidence.

Then, to cap his race season I went into the Wasatch 100 with an aggressive, but very reachable, goal. I knew it would be hot near the midway point and prepared appropriately, except for one thing – an extra water bottle for the 14 mile stretch from miles 39 to 53. And it was during that time that the heat destroyed me, running out of water and stumbling 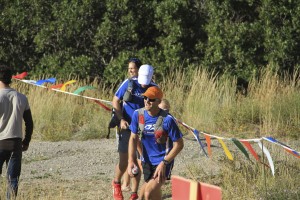 into the mile 47 aid station extremely heat exhausted. After a 40 minute recovery, I headed back out onto the course with my goal of sub-24 lost, but with a renewed energy and excitement to finish. However, in this compromising fashion, I settled on “let’s just finish and have fun” instead of “push hard and try to see what time you can still put up”. The inevitable goal was achieved, I had a great time, but as with all of my featured races this year I was left with a slightly bitter after-taste for the mental effort I gave late in the race.

When running ultramarathons there are countless things that can go wrong and break down a runner. Our own minds shouldn’t be one of them. Compromising is one of the easiest ways to give into ourselves, to allow our goals to slip away, and ultimately walk away wanting more. Don’t be like me, but instead find the mental toughness that will drive you to reach your goals, no matter what.

When have you fallen into this pattern? How do you build mental toughness? Share your stories in the Comments section.

5 Responses to The Compromise