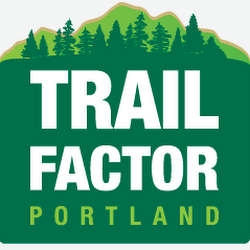 Trail:   A mark or a series of signs or objects left behind by the passage of someone or something

Factor:  One that actively contributes to an accomplishment, result, or process

Put those two together and you have TrailFactor:  A Portland, Oregon-based trail running group that regularly gathers for group runs, social meet-ups, trail maintenance, and micro brew sipping.  In the early part of 2012 the low key and fun-loving group led by Todd Janssen and Renee Seker took the reigns from the former PCTR race directors and created TrailFactor 50k, Half Marathon, & 5-miler in Forest Park held on Memorial Day Monday.

Before delving into the event let me give you some information about Forest Park and what an absolute gift it is for us Portlanders. One trail…yes…one trail (Wildwood Trail) goes 30 miles from end to end. Off of that main vein a trail runner can literally and figuratively get lost for hours in the 5,000 acres of sacred forests. In total there are over 70 miles of trails to be explored in its boundaries which is just five minutes from downtown Portland. If you have some time you can read more about Forest Park HERE and/or watch the following interesting 30-minute documentary by Oregon Public Broadcasting HERE.

I run several hundred miles per year in the expansive “playground” that is fortunately just steps away from my home.  I have a deep connection with the park and I love “showing it off” to friends, family, and fellow runners that visit Portland. The past two years (2011, 2012) I have participated in the event, and one of the coolest things for me to experience while racing is the reaction I see from other runners that aren’t from the area.  Last year I got a couple comments during the race like, “you run out here every day?” and, “wow, it is so green…and quiet…and beautiful!”  There is definitely a special energy in Forest Park that is often difficult to articulate. You just have to get out there to feel it!

The 2012 event was also extra memorable for me because during the race I ended up linking up with my good friend Nick Triolo. Nick and I have run many miles together in the park and know it like the backs of our hands. In fact we actually met for the first time while we were on the Wildwood Trail back in 2009.  Fast forward to 2012 and we were running/racing the majority of the 31 miles together, and during the last 10k it became a speechless, grunting, stride-for-stride friendly battle. When we entered the opening into Lower Macleay Park, where the finish line could be seen from a distance, we both kicked hard into a dead sprint. It was hard to believe that we were running that fast after 31 miles but Nick was able to out-lean me by two hundredths of a second for a third place overall finish. Out of all the events I have been a part of in my running career this one stands out as one of the most intense and unforgettable races. Every time I run down that Macleay Trail I think about how hard we ran that section and how I (unsuccessfully) tried to shake him off my back.

Photo finish leaving it all out there! Captured by: Michael Lebowitz (Long Run Picture Co.)

Many of the volunteers were TrailFactor runners and friends who were quick to refill bottles, offer nourishment, and send you on your way with encouraging words.  They even had a prize for the first runner that reached Aid Station 1, who happened to be former Badwater winner Zach Gingerich!

The course itself utilizes some of the most picturesque sections of the park with a lot of terrain variability. There are some long gradual climbs, fast and furious downhills, and some nice soft, rolling sections of trail running bliss. There are even some sections of old growth and if you look up early in  the morning you might even see a big owl swooping through the canopy.

Here are a few reasons to put this race on your calendar:

* Experienced race director and crew (that hands out lots of great “schwag” too!)

* A 3-day weekend and a perfect excuse to come visit an awesome city (Portlandia!)

I could go on and on but I’m going to stop here so you can go plan your race calendar…If you need help or have questions about anything regarding this event feel free to leave a comment….and hopefully I’ll see you at one of the races on Memorial Day weekend here in Portland, Oregon!

Click here to visit the event website and learn more about the details for TrailFactor 50k, Half Marathon, & 5-miler