The Dorais Brothers – Breaking Away and Creating a New Ultra Adventure 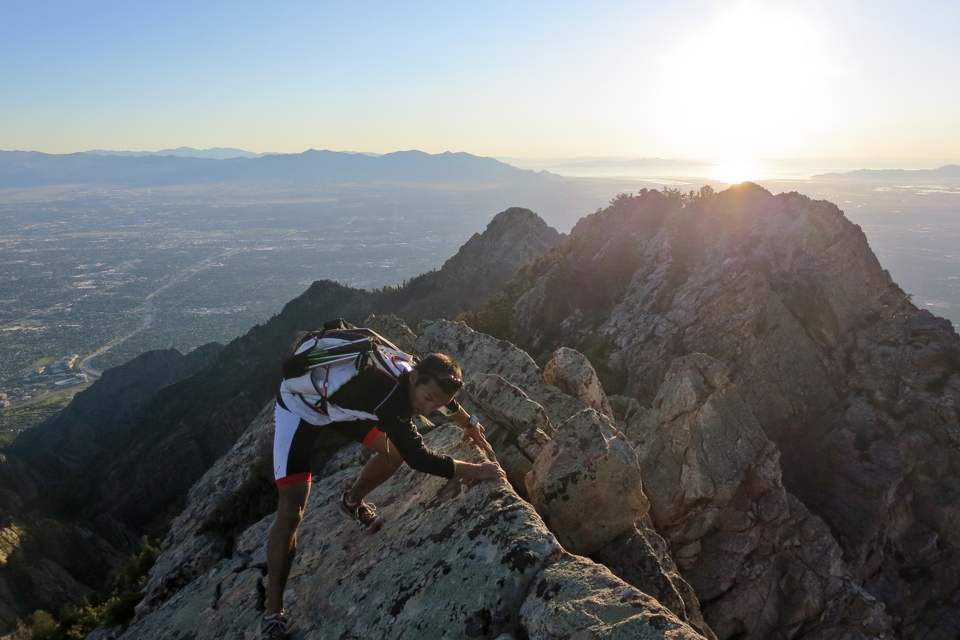 As we climb higher and higher into the mountains we become enveloped by the clouds.  We settle into our site amongst the grey mist, barely able to see the massive features which stand almost within reach.   There’s no perspective.   We move only on patches of ground which guarantee our safe return.   Our attempts at breaking though this fog with light only angers the mist; it retaliates, throwing the light back into our eyes.   So we wait.   We hope for a wind that will sweep through and brush away this blanket, allowing us to see the beauty we know is around us.

Brothers Andy and Jason Dorais ride this wind, and some might say, are the wind.   They playfully travel through the mountains revealing new perspectives and showing us a beauty that delights our eyes and opens our minds.

They present us with a running adventure, a muse, that will take them 65 miles, over 30,000 vertical feet, and stretch for 30 hours.   We will go on to call it amazing but they will call it the Salt Lake Skyline Traverse.   It unfolds and takes shape as part scramble, part bushwhack, part climb and supported by hours of running across the Wasatch’s most prominent peaks of the Salt Lake Valley.   It’s an idea, a vision, that simply appears to Andy as he stares into the mountains while driving along Interstate 15.   It’s so obvious, not only to Andy but to brother Jason as well.   The biggest question for them is not can, or will, they find their way across the mountains but, “Why haven’t we heard of anyone doing this before?”.

For Andy and Jason, there’s no turning away.   They can not.   They don’t see the Skyline Traverse as a dream or a concept.   No, their passion for such adventures is so intense, and their joy so deep, that these opportunities feel like stealing… how could this be free? 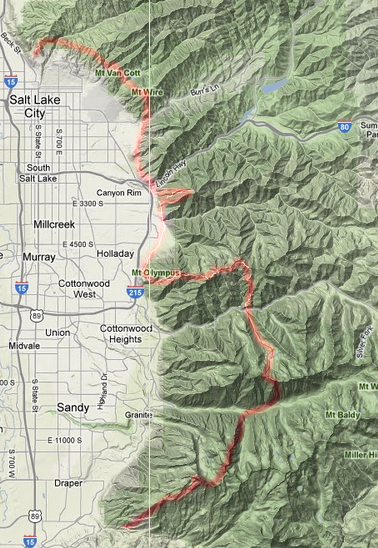 They quickly begin to plan.   First, they choose their artist’s point.  It will be the Sugar House neighborhood of Salt Lake City.   From this vantage point, the peaks are selected.   Next, the line of navigation across their selected peaks develops.   It’s drawn from firsthand knowledge accumulated during their numerous ski, scramble, climbing and running adventures through these mountains.   Finally, recon missions are launched, and advice sought, to fill in the gaps concerning lesser known parts of these mountains.   They’re looking for their line, that perfect line, to serve as their course.   They finish with a design that will stretch from Lone Peak in the south near the town of Draper and head north.   It will cover 16 peaks and eventually finish at Ensign Peak near the State’s Capitol building.   For the most seasoned ultra runners this traverse tilts the scales to register “epic”.   But, the Dorais brothers aren’t even ultra marathoners.   Although, Andy did complete his first ultra at the 2012 Pocetello 50 miler.   Impressively, he finishes 9th place overall, made more impressive based on a long run of only 16 miles.   Instead, Andy and Jason are multi-sport spirits found roaming in and around the western mountain states.   They climb, ski, scramble and run.   They push their physical and mental limits as the simple state of being that brings balance to their lives.

Coming from middle distance collegiate track backgrounds, the Dorais brothers land in Salt Lake City after their family relocates from Bloomington Indiana in 2000.   Andy, now 31, and Jason, 30, spend their first two years in utah learning to climb as well as skiing at the local resorts.   Jason says, “We almost gave up skiing, it just got too boring”.   As fate would have it, in steps Sam Inouye who introduces Andy to backcountry skiing.   Andy is instantly freed.   Backcountry skiing, with the inclusion of climbing, ignites a new passion inside of Andy, it transfers to Jason, and they’re immediately attacking some of most serious aspects of Ski Mountaineering (Skimo).   Skimo’s central premise focuses on utilizing your own power, skills and abilities to move up mountains and then ski down.   It can be as simple as using basic downhill ski gear while applying special skins to the bottom of the skis which allow you climb uphill and ski down.   But, skimo can be one of the most intense, technical sports on the planet.   Climbing ice walls and rock faces followed by the ridge traverses, drop ins off cornices and/or rappelling into chutes in order to ski down.    All of these technically difficult maneuvers occur while wearing winter ski gear with the added hindrance of skies, poles and additional rescue gear being strapped to your back.

But to truly understand the Dorais brother’s Salt Lake Skyline run you not only have to understand them as athletes, but as people.   Their passions are shaped by a desire to see how far, and how fast, they can move through the mountains.   Andy says, “We’re trying to move efficiently in the mountains”.   It’s not only about the doing, but doing well.   Jason adds, “when we race we want to race well”.   This drive and passion has Jason working hard to make the US National Ski Mountaineering team at the same time he is completing his emergency medicine residency.   Andy follows in a separate but parallel path; also finishing his emergency medicine residency, working hard in the mountains, being a husband, and a father to 7 month old Lars.

And with this passion and drive… well, give them 48 hours of free time and they drive to Washington State in an attempt to break the Mount Rainer round trip ascent speed record… and nearly do.   It’s not ego, internal demons, self loathing or low self esteem that takes them to such places to attempt such things.   It’s as if mountains where designed for them as their perfect playground.   It’s exactly this connection to the mountains that turns a planned 7 day vacation at the Bugaboos in British Columbia into a successful one day adventure followed by a decision to drive to Alaska for more adventure.  There’s no hanging out and relaxing in a lounge chair at the base of some ski resort.  Jason says, “a couple of days off and we do get antsy”.

As we circle back to their Salt Lake Skyline Traverse, we find the brothers starting with an attack of Lone Peak at 3:30am.   Their feeling fresh and ready to conquer.   As they make their way across the Wasatch peaks questions arise and energies run low.   Do they make it?   I could do no better than to direct you their firsthand detailed accounts.  Andy’s report can be found at his blog and at Jason’s Blog.

Most importantly, it will be through their eyes, and with their passion and drive, that the Dorais brothers will create what the rest of us will come to live for, and love, in the years to come.