The Reality of Adventuring, a Gannett Peak Ultra Story

Think about your favorite race you’ve run. What made it so special? For many, the aid stations and volunteers rank near the top of the list. The assistance they offer and the personality they bring to the race are frequently so critical to ensuring success that it even exceeds that of pacers and crews.

Aid stations can be full-service; with chairs, cots, blankets, tables, a fire, and a full suite of food, including cooked food (eggs, bacon, hamburgers, etc). Other aid stations are hiked in with little more than water, some peanut M&Ms, and PB&J fixins. At certain stages in a race, one isn’t necessarily more important than the other since what truly makes an aid station special are the people who work it. Most often managed by volunteers, these selfless individuals work for hours on end, generally without sleep, to ensure that every racer has the best opportunity to finish. 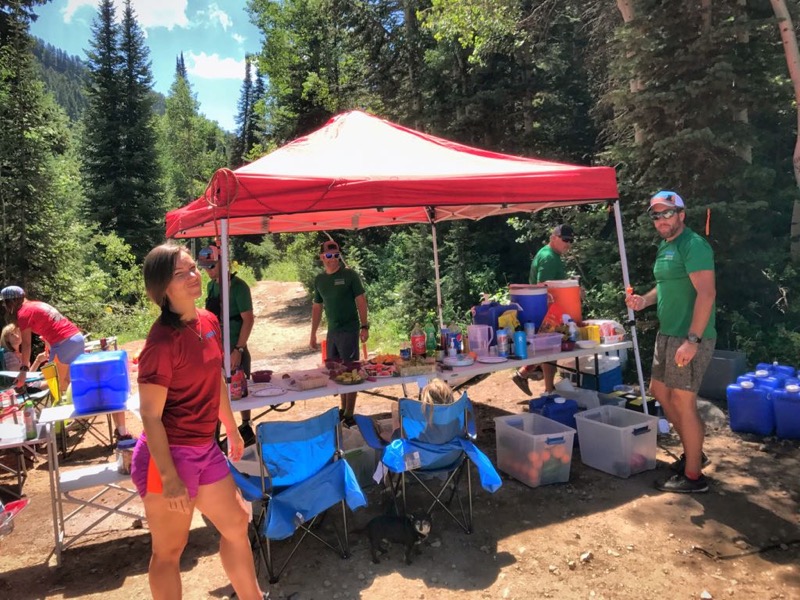 Pacific Mine Aid Station at the 2017 Speedgoat 50k

Aid station setup is most regularly provided by the Race Director. Infrequently, volunteers might contribute tables, coolers, and/or canopies; a cost regularly incurred by the race staff. TAUR co-owner, Matt Williams, might be the greatest aid station chief of all time. With a mile-deep background in ultras and a few hundos under his belt, he knows better than most how to manage an aid station. What makes him and those who volunteer at his aid stations so special is the experience they bring to those who pass through. For the irregular racer who struggles to continue, Matt and crew know just the words of encouragement and the experience to back up how to leave and finish strong. Thanks to their knowledge and encouragement, more than a few racers have gone on to finish their goals when otherwise might have DNFed.

Recently, TAUR crews have worked aid stations for several races and have teamed up with the likes of Camp Chef, The North Face, Mountainsmith,  RovR, and other brands to provide cutting-edge services to those who pass through.

When you’re running an aid station for 30+ hours and runners are coming through at all times of the day and night, you have to be ready with more than chips, candy, and Coke. At the Buffalo Run 100 (and other distances) we ran the Elephant Head aid station. Because of the nature of the course, ours was the busiest aid station by far, seeing more than 1500 runners (all runners came through the aid station multiple times, some as many as 6 times). 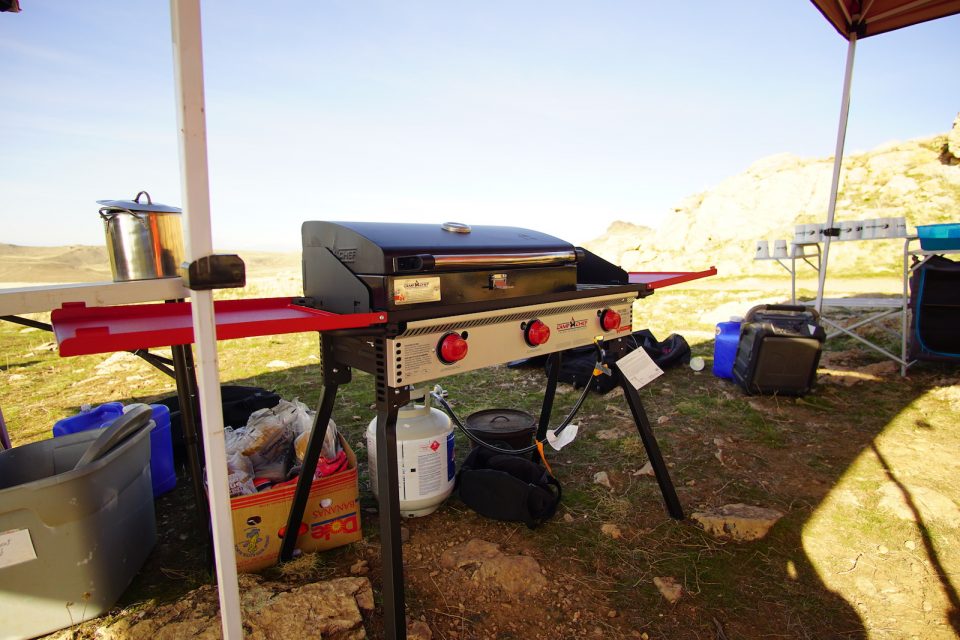 Late into the night and long into the next day we kept soup, grilled cheese, coffee, and all sorts of food hot for needy runners. On more than one occasion the cup of Treeline Geo coffee or some simple chicken broth at 2am changed the outlook of a runners attempt at 100 miles. Being able to heat quickly and reliably was critical. 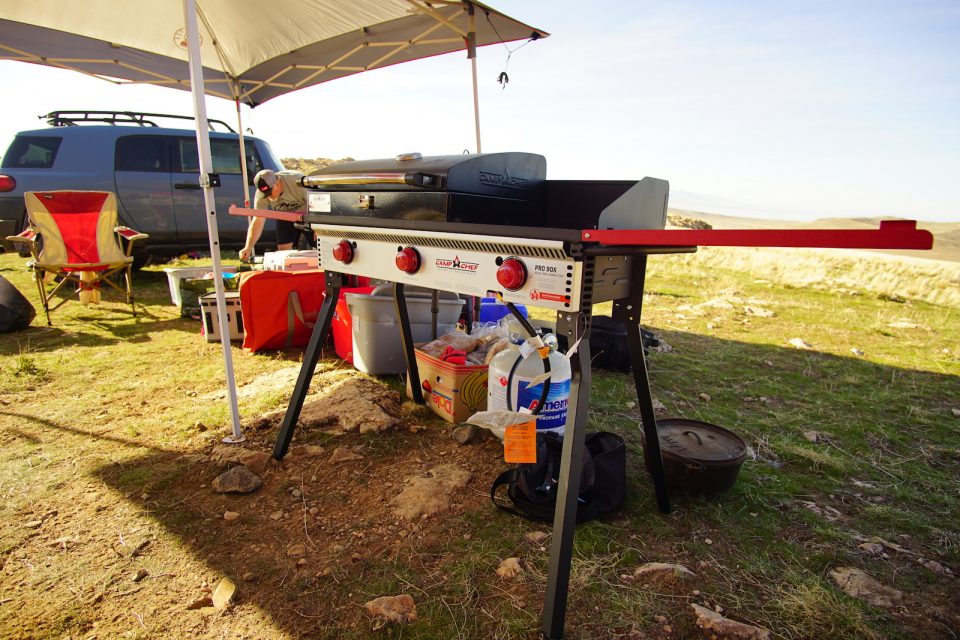 Camp Chef sent us their killer three-burner Pro 60 stove, grill, griddle, and a slew of pots and pans that kept us up and running with a single issue. We have since run two other aid stations, hosted multiple group events, and even a few large family gatherings. We’ve literally beat the crap out of these products and they keep on working perfectly. 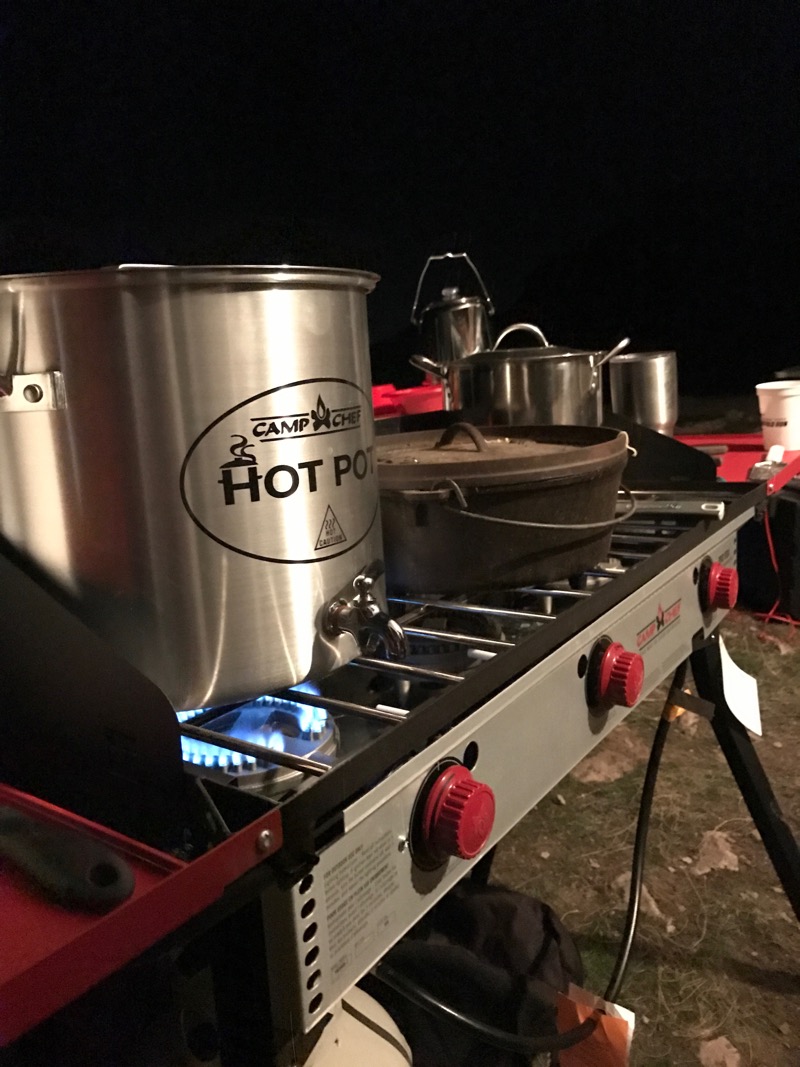 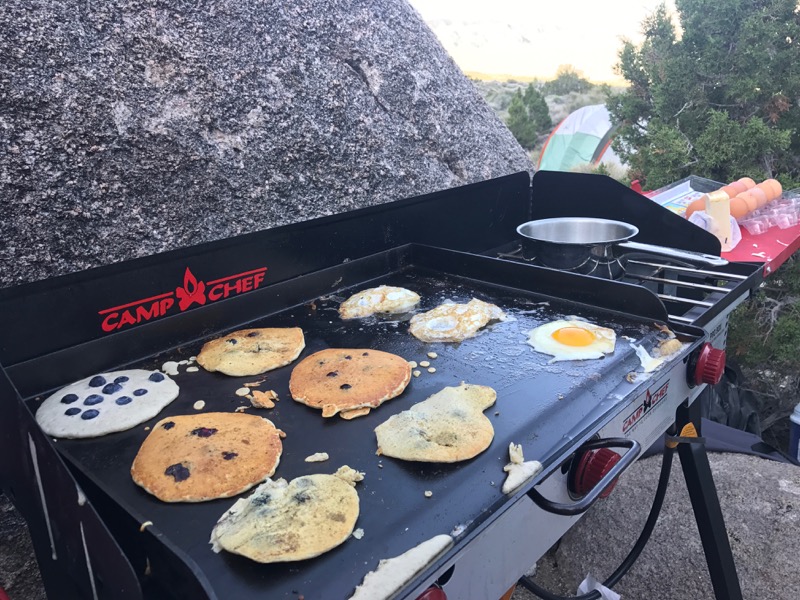 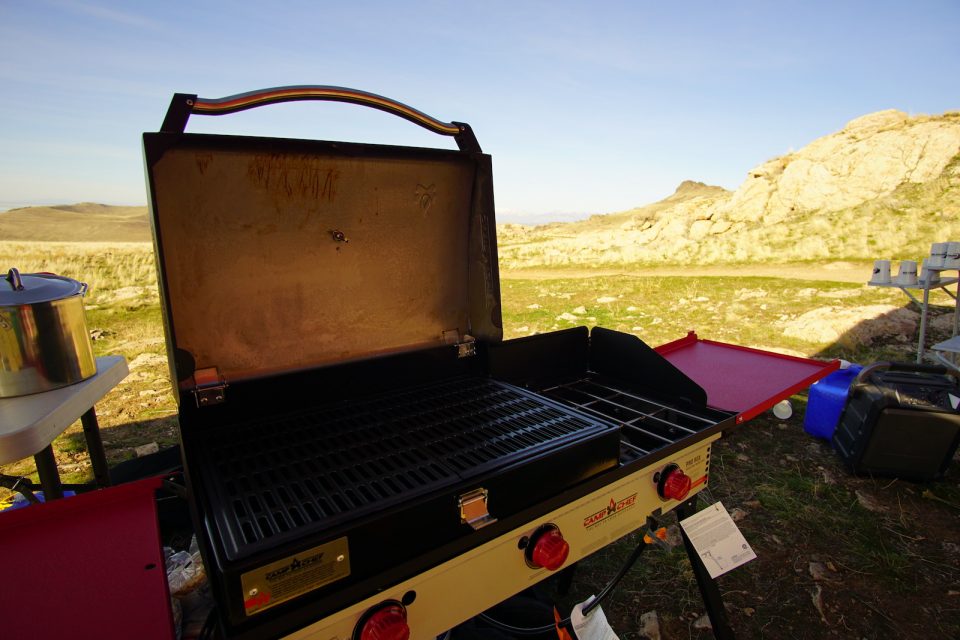 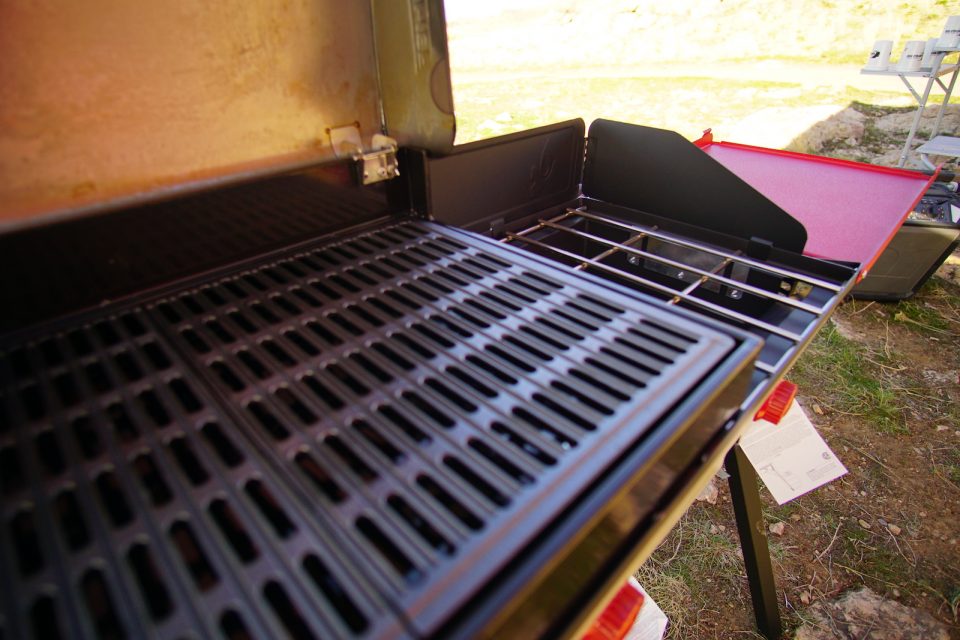 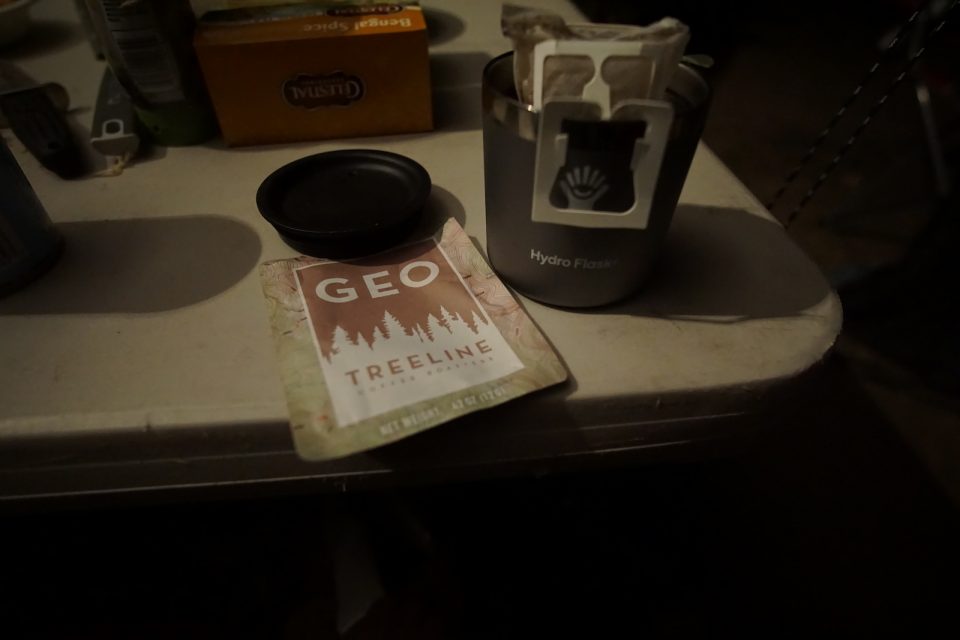 Treeline GEO coffee is possibly the best instant coffee on the planet.

One hot day melted into night. We watched the sun fall behind the western horizon, leaving the a sky filled with color. Between the first and second laps for the 100 milers we had several hours to sit, relax, and prepare for the nighttime rush. For a short time we allowed ourselves to be consumed by the setting sun. 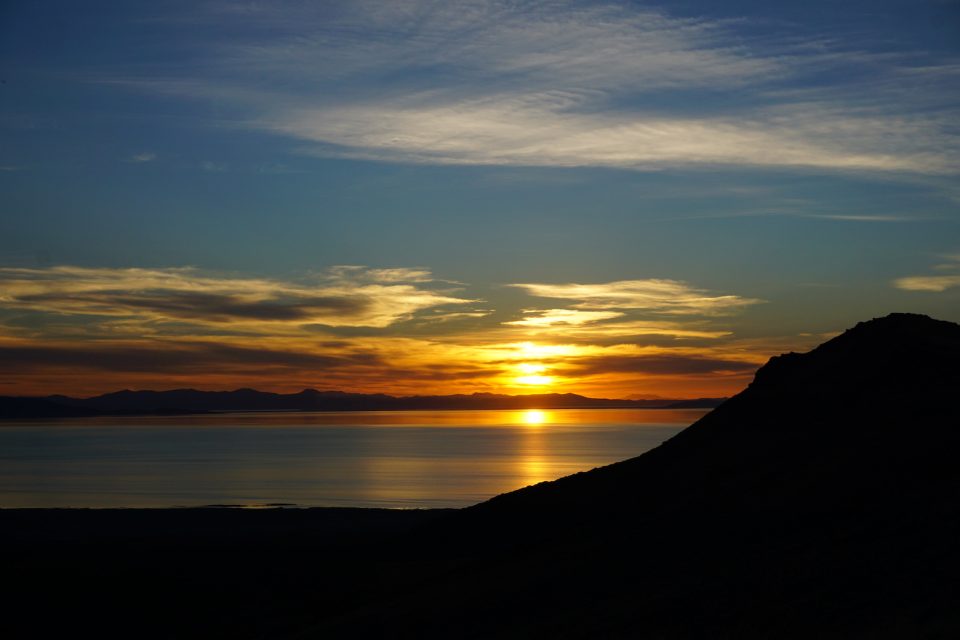 Shelter was vital, both from the heat of the day and the wind and cold of the night. The North Face sent us their Homestead Shelter. Not only did it have places to hang lights at night, but we were able to keep all of our extra water for the following day covered and out of the sun. Sturdy and tall, it provided more than adequate protection from the elements as we served runners for hours on end.

At TAUR’s Quest for King’s event, held just this past weekend, the Homestead kept runners safe from the rain as we got pelted off and on for most of the day. While camp host, Curt Fortie, made chili on the Camp Chef, we all hung out and shared stories from running the peak. It was the perfect end to an incredible day. 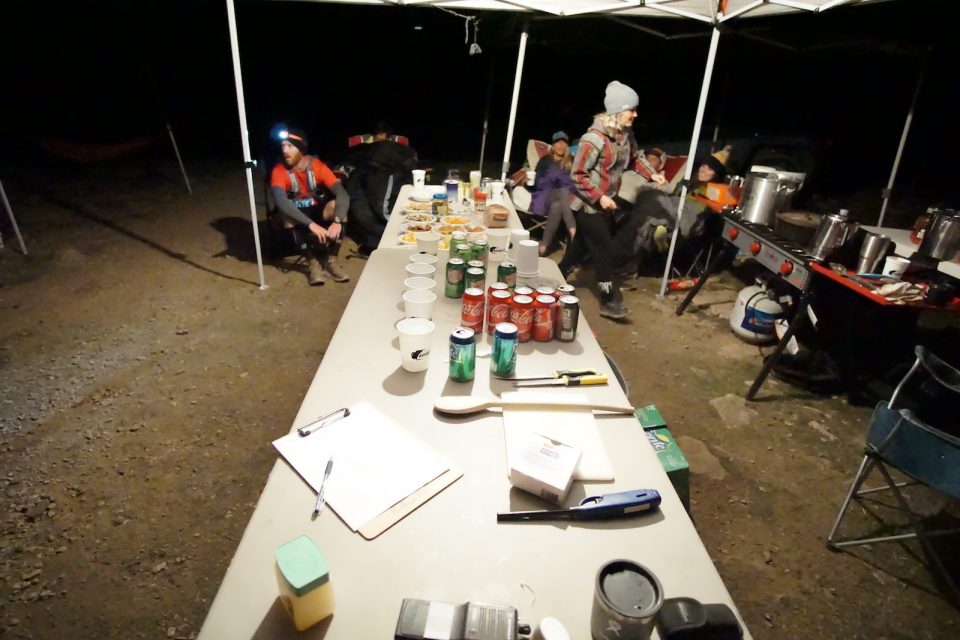 Sometimes shelter is as simple as needing some shade to relax. At the Buffalo Run we set up the Mountainsmith Shade Dome and placed a hammock under it. In the heat and exposure, it offered solitude and respite from everything else going on around us. There were even a few wary 100 milers who took the opportunity to sleep in the hammock, under the Shade Dome, for a while to recover before continuing on. 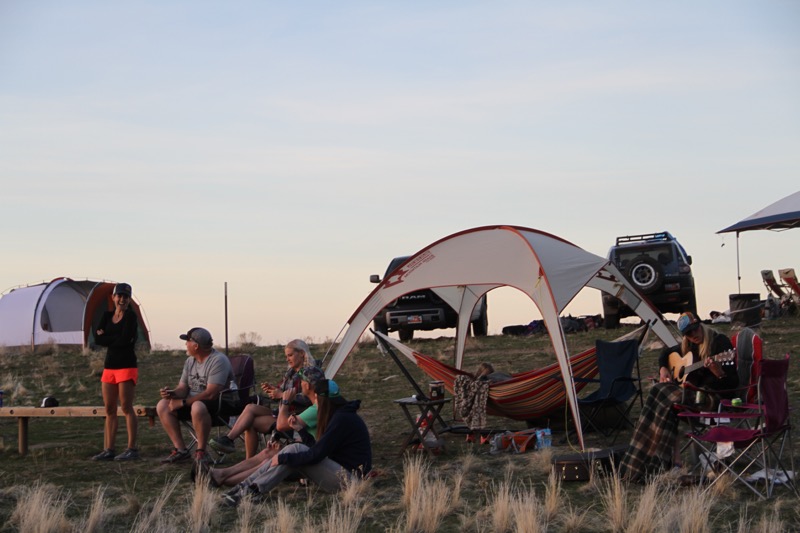 Enjoying some downtime under the Mountainsmith Shade Dome

The one constant we have relied on this whole year was the RovR Roller 80 Campsite. We came across these guys in the pavilion at Winter Outdoor Retailer and they sent us one of their rolling coolers. Heavy duty wheels and a burly pull-bar make this thing perfect for dragging to and around an aid station. It has 2 compartments on the inside, a drink holder and cutting board for the outside, and an additional external soft cooler that folds up.

We took the RovR to Antelope Island, Park City, Canyonlands, Zion, and several places in the Wasatch. It’s been banged around and dragged through the forest and desert. It continues to be the staple testing product we take wherever we go. 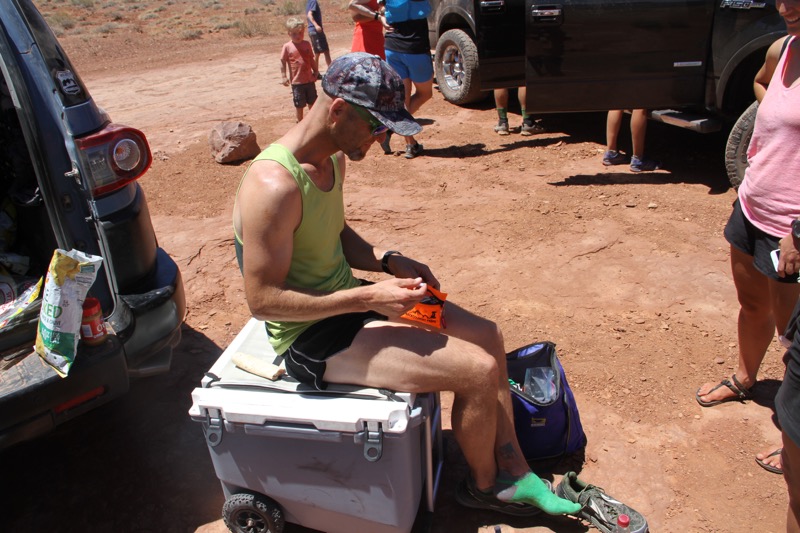 The TAUR staff isn’t just made up of runners. We love to volunteer and support our friends and this great community. We were lucky this year to have partnered with some incredible brands that made those adventures easy, and we look forward to all of the new adventures we’ll share going forward. We not only hope to see you at some of these awesome events but hope check out these cool, supportive brands also. You won’t find many out there that are better.

Check out this great video we did about running an aid station at Buffalo Run.

One Response to The Perfect Aid Station – Product Reviews