5 Steps from the Road to the Trail

This country seems to be enamored with peaks above 14,000 ft. Maybe it’s because that elevation is the highest benchmark of any peak in the contiguous 48 states. Maybe it’s because peaks above that elevation only exist in California and Colorado. While the reasons for it vary one thing is clear, no one really seems to care about peaks below that elevation (outside of state highpoints). It’s a shame really, because for decades the world of peak-bagging has missed one of the best and most aesthetic challenges in the United States – the Utah 13ers.

Utah boasts 21 peaks above 13,000 ft. And unlike California and Colorado, all of the peaks above this benchmark are all in the same mountain range and lie along the same ridgeline. What truly makes a conquest like this unique is that there isn’t a road within 10 miles of the nearest 13er, making a supported attempt nearly impossible. I saw the potential of summiting all of Utah’s 13,000 ft peaks in one go (the previous FKT was done in 8 days using advanced basecamps) back in 2004 and since that time have made three failed attempts to accomplish the feat.

On September 9th and 10th two Salt Lake locals, Jason Dorais and Tom Goth, completed the daunting route; completing all 21 peaks in 36 hrs 18min 58 sec over a distance of roughly 60 miles with 25,000+ ft of climbing, most of which was over large boulder rock hopping and scrambling. Said of the difficulty of the route, Goth recounts,

” It seems to take forever to [navigate] the large talus. In the end it was a lot of what we could expect the rest of the trip, but at the time it felt heinous.” 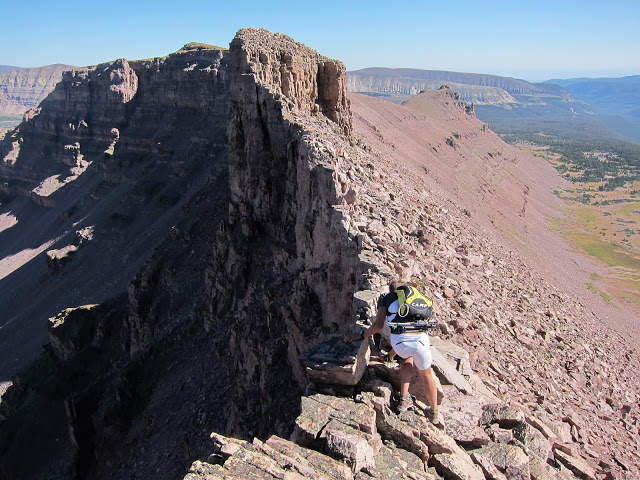 Common ground throughout the Uintas above elevations of 12,000 ft. Tom Goth navigates down East Lovenia, peak #5

Of the route, both Dorias and Goth agreed that it was pretty straight forward. The terrain, while technical and difficult, was to be expected and route logistics – other than a route choice in the dark from Powell Peak to Gilbert Peak and the exit route out Swift Creek – were quite straight forward.

Speaking of the route itself, Goth says,

“The route would start at the trailhead gate at the end of the road in West Fork Blacks Fork in the north, tackle each group as ordered above and then exit Swift Creek to the south. Roughly 60 miles and 23,000′ of ascent.”

The duo found themselves slogging and bushwhacking through Henry’s Fork basin into their second morning, around 24 hours into the trip. They had only done 3 peaks in the last 12 hours and were feeling deflated. After the long slog to the summit of Gilbert Peak (which includes several false summits) the couple made their way over to Gunsight Peak. Dorais recollects,

“We did the straight forward traverse over to Gunsight Peak where the sun started to rise.  At this point I wanted to quit.  The only problem was there really wasn’t an easy way to do so.  It had taken us about 12 hours to hit three summits and we had another 12 to go.  I was worried we weren’t going to summit South Emmons for another 12-15 hours.  With this in mind, knowing we couldn’t quit here,  we figured we had to just keep moving and eating.” 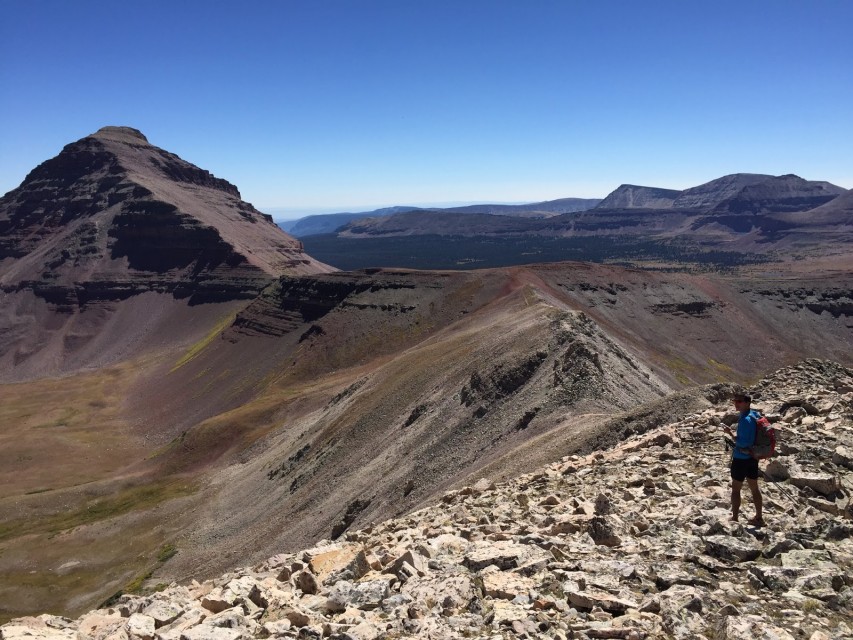 Once deep into the Uintas, most hikers and runners simply have to finish what they started. Cell reception is non-existent and even though the team carried a SPOT tracker that would allow them to call SAR, it would be hours before help could be sent. The only option was to move forward. Dorais and Goth continued on through the remainder of that day, climbing 12 more peaks over the next 12 hours. They had one more encounter with navigation – exiting Swift Creek drainage – but with a few miles left, found the trail and were able to get into a good running pace to finish, one of the few places along the whole route that actually accommodated running.

The task, 11 years in the making, had finally been done. Congratulations to Jason Dorais and Tom Goth for their effort. It can only be hoped at this point that others will catch onto what must be one of the most aesthetic and purest lines of peak-bagging in the entire United States. The Uintas offer hikers and runners the solitary adventure of a lifetime, whether tackling one or all of the 13ers, the Highline Trail (83 miles long), or a fun afternoon winding around lakes and peaks. If you haven’t put it on your bucket list to visit, do it now, before the rest of the world finds out. 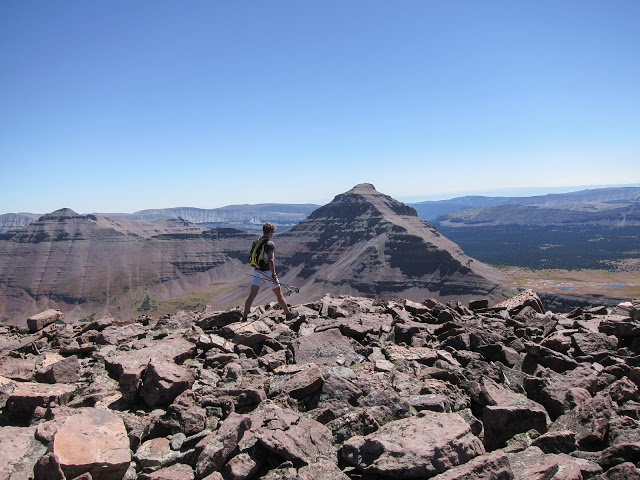 Read Jason and Tom’s personal accounts through the below links:

One Response to Utah 13ers FKT