So you had a bad race?

V is for Vegan

Well…you had to go and do it. You pushed enough of my buttons that I am now back here. You happy? Well…hopefully the readers will be.

It’s funny really…when I was chain-smoking Marlboros and chugging Jack Daniels during high school nobody ever asked me “how long are you going to keep this up?”

Then when I was in college chain-smoking Marlboros and chugging vodka in the shower (in the morning) nobody ever asked me “how long are you going to keep this up?”

Later, when I was bar hopping (with a friend that carried a gun since I had a tendency to start fights…did I mention I’m Irish?) while chain smoking Marlboros and chugging gin nobody ever asked me “how long are you going to keep this up?”

And now I bring you to present day where an older, wiser ultra running adult sits down for a dinner with friends and leans to the waitress and whispers “Can I get the salad without any cheese or chicken?” and all hell breaks loose!

“Oh, he’s a vegan…are you still doing that…how long are you going to keep that up?”

It is not to be ignored. There’s something upsetting for people to be around vegans. And believe you me (whatever that phrase means) I don’t say it out loud or wear a “Meat is Murder” shirt. I just get invited to restaurants with friends and eventually have to order food. You know…substance that I am putting in MY mouth that will deliver fuel to MY body…and eventually escape MY body while reading truck and gun magazines, basically an event has nothing to do with those around me…but yes, there it is…the scorn, the finger pointing…the whispers…and my favorite, the dangling of meat on a fork in front of me asking if I miss steak…really?

Here’s an idea…back off! I don’t go around dangling a Leadville 100 belt buckle in front of non-runners. 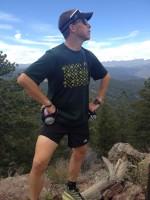 Oh look, he’s one of those elitist vegans. Nope…just tired of imagining your arteries screaming for help while I eat my choice of food. I don’t come unglued when you order your meat pile so please leave me alone while I eat my plants. Yeah, I like plants…so what? Some guy named Scott Jurek seems to do OK eating plants…you might have heard of him. Right here at TAUR we have the amazing Jerry Armstrong owning the trails and races on plants.

I blazed through the holidays without a worry about calories and had a great time. I even had a full table of friends and family over for Thanksgiving (quinoa stuffed squash) and we all had a wonderful meal and a memorable evening. The real torture is listening to all the post holiday commercials on how to lose those “holiday pounds.” I’m exempt from that problem.

I like to run and take care of myself. What’s wrong with that? I don’t throw pointy elbows at people when my tiny expensive airline seat space is infiltrated by those who make poor food choices. Nope…I keep my vegan-mouth shut and endure. It’s amazing how many people in Colorado are singing “Glory Halleluja” in response to being able to smoke a plant but try and eat one and there’s trouble. I feel like a loner or oddball at times but at least I’m eating right (and not hurting or killing animals).

I really don’t get it. Do people feel bad for eating animals? If they looked into the process and learned more about factory farming they might…but I’ve never brought it up before a meal with friends or associates. When asked about my eating I am happy to try and educate on why it works for me. And yet there’s still anger or maybe it’s guilt. I don’t know, but I hope those frustrated can find peace. In the meantime, I’ll keep stacking up the running miles and yelling “Your safe with me buddy!” at all the farm animals I pass on my long runs. And please don’t be one of those people that say they are vegetarians that eat a little fish now and then…that’s like saying you are a triathlete that doesn’t swim.

So I am a vegan…a 46-year old vegan who ran 2-100’s and 7-50’s in a two-year span on plants. When I eat I feel satisfied more than ever and when I run, I run better than I ever have in my life. Don’t freak out…I get enough protein (the #1 excuse people use for eating meat). I’m not telling you to become a vegan or a vegetarian (some people just can’t fathom a life without cheese) but I hope you try it. I just ask that I get to eat what I want without the taunting of flesh from forks and the usual jabs. I’m a big boy and I can handle it. I just worry about karma…don’t you?

Feel free to follow me on Twitter. I don’t post pictures of food, I laugh about running and sometimes quote Ron Swanson from Parks & Rec. I also forgot to sign into my account last year after a “media break” and lost 500 followers…oops. Come keep me company.

» Musings, Nutrition » V is for Vegan

10 Responses to V is for Vegan