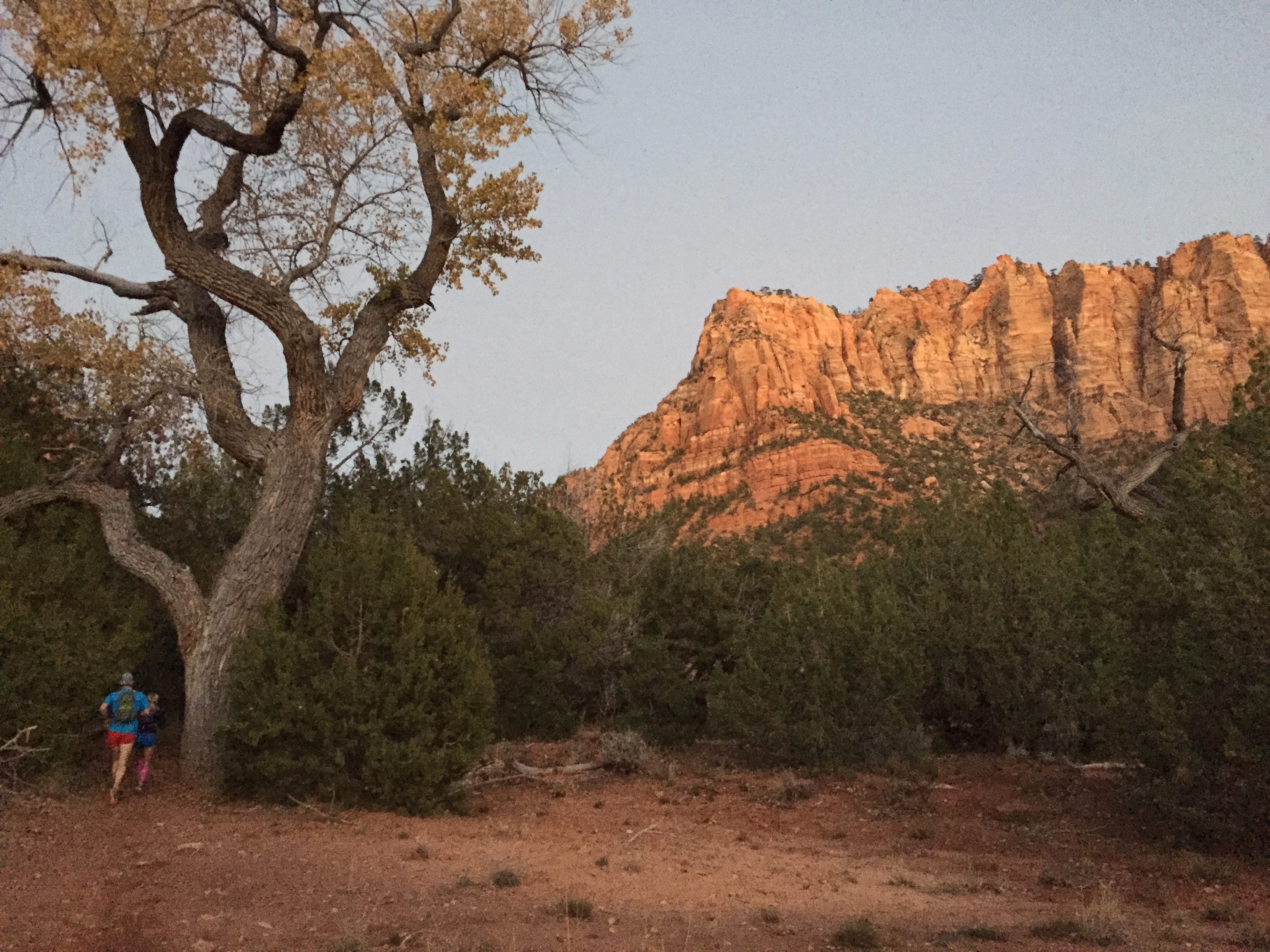 Some pictures can’t be taken, only seen. Visuals so clear, so delicate, in situations so intimate – that moment between yourself and nature – that they can’t be duplicated outside of that one instance in time. Likewise, some experiences can’t be retold. The immensity of it all is so great there simply aren’t words to describe it succinctly enough to pay it the appropriate amount of respect. Yet, allow me to try. 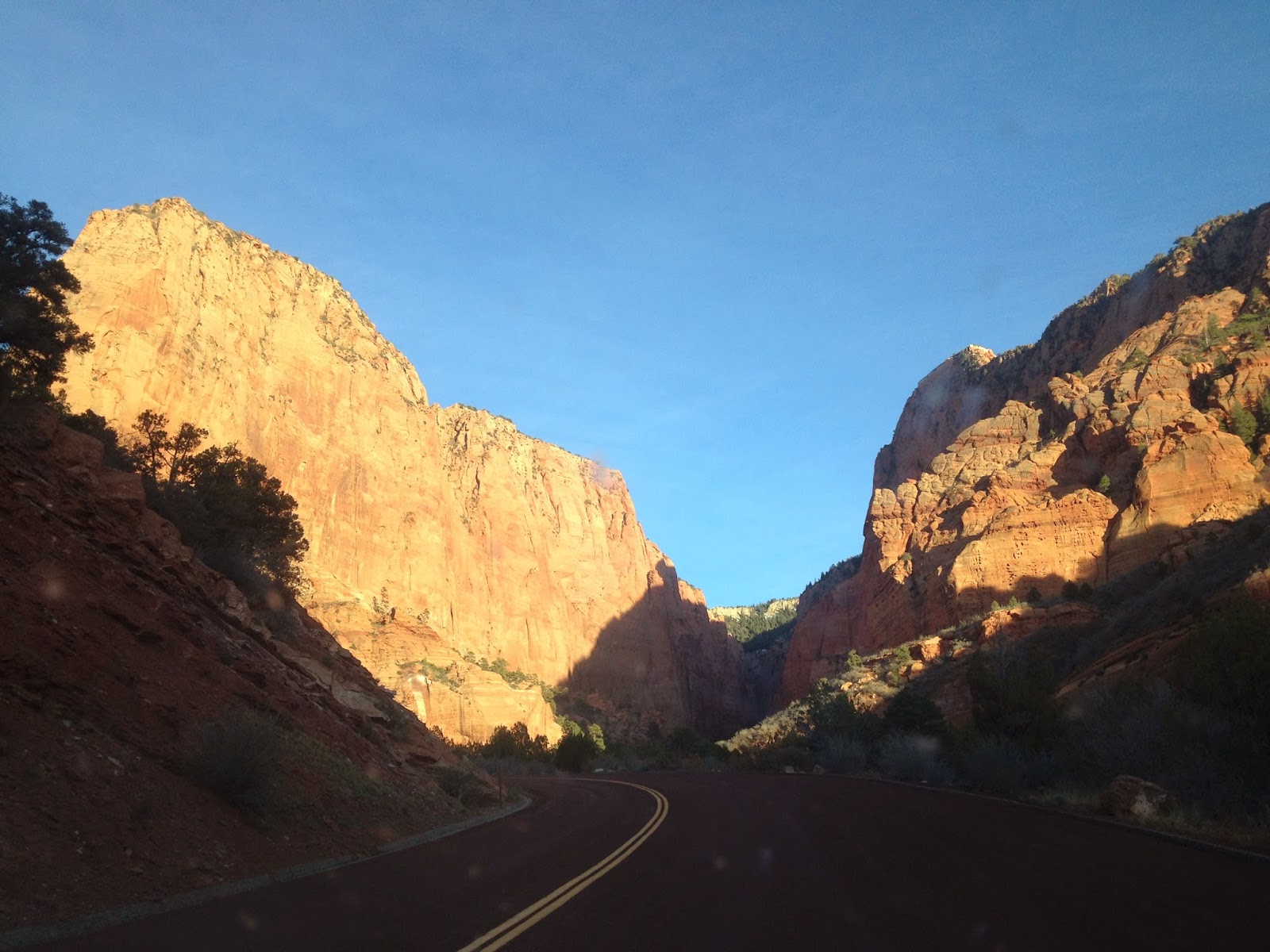 I never planned to return to Zion for another double crossing. The single Zion Traverse (48 miles and approximately 9000 ft of climbing) has become a goal and/or memorial run for many  ultra runners. In 2012 I became the first person to do a full traverse and then immediately return the opposite way to my original starting point. Unlike a race where you have aid stations or crews every 5-8 miles, Zion offers only a few places along the route where crews have access to you. Beyond that runners are in extremely remote parts of the park where few travelers go. If an accident were to occur it could be hours or days before help were to come. While I felt that the time I put up of 26:55 was extremely soft, I knew it was respectable and felt enough closure with the accomplishment that I had no plans to return. And yet, for some strange reason, when my friend, Jennilyn Eaton, approached me about taking a trip to do the Zion Traverse, I instinctively said, “we should do a double”. How short my bewildered memory is. 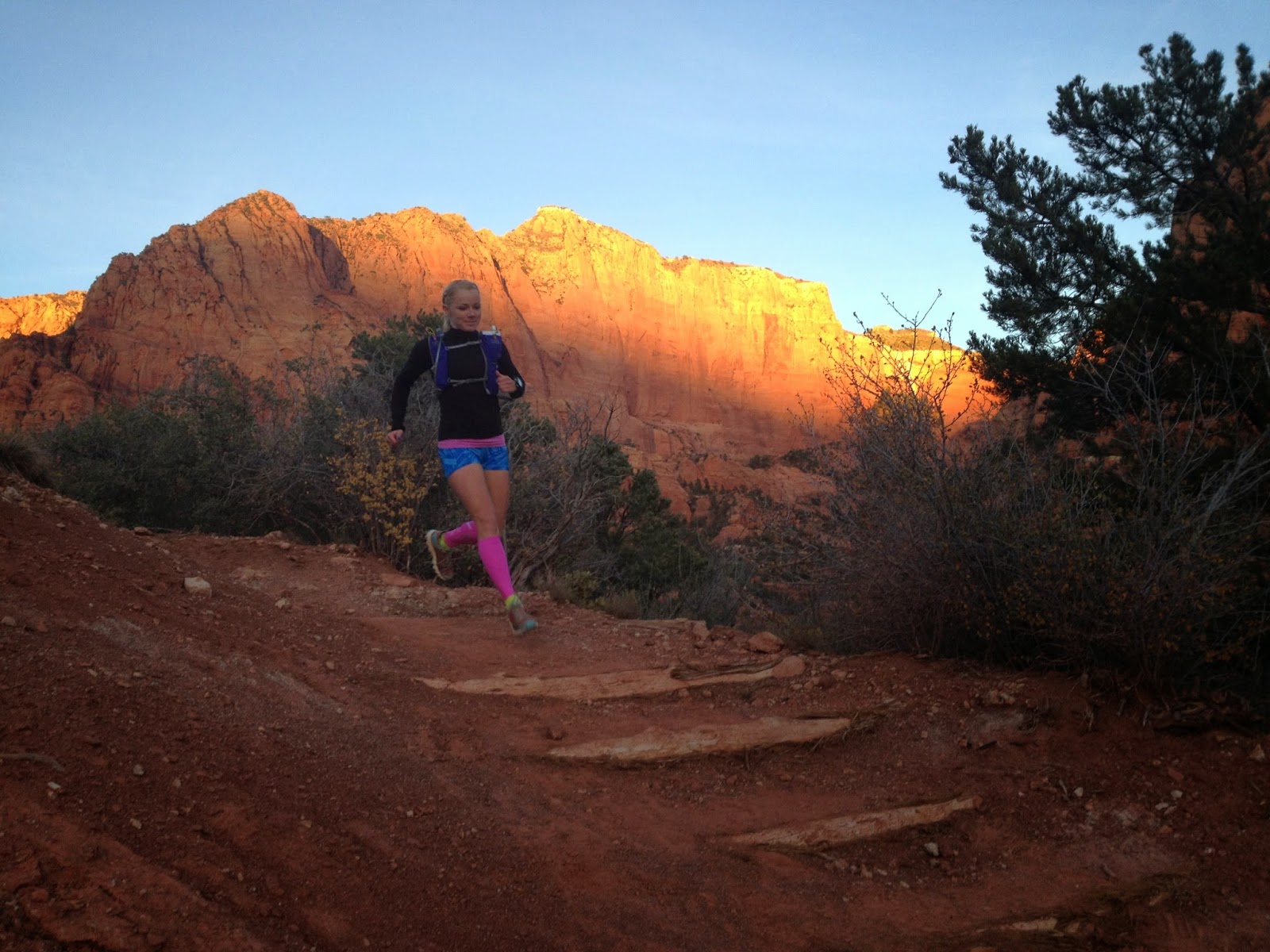 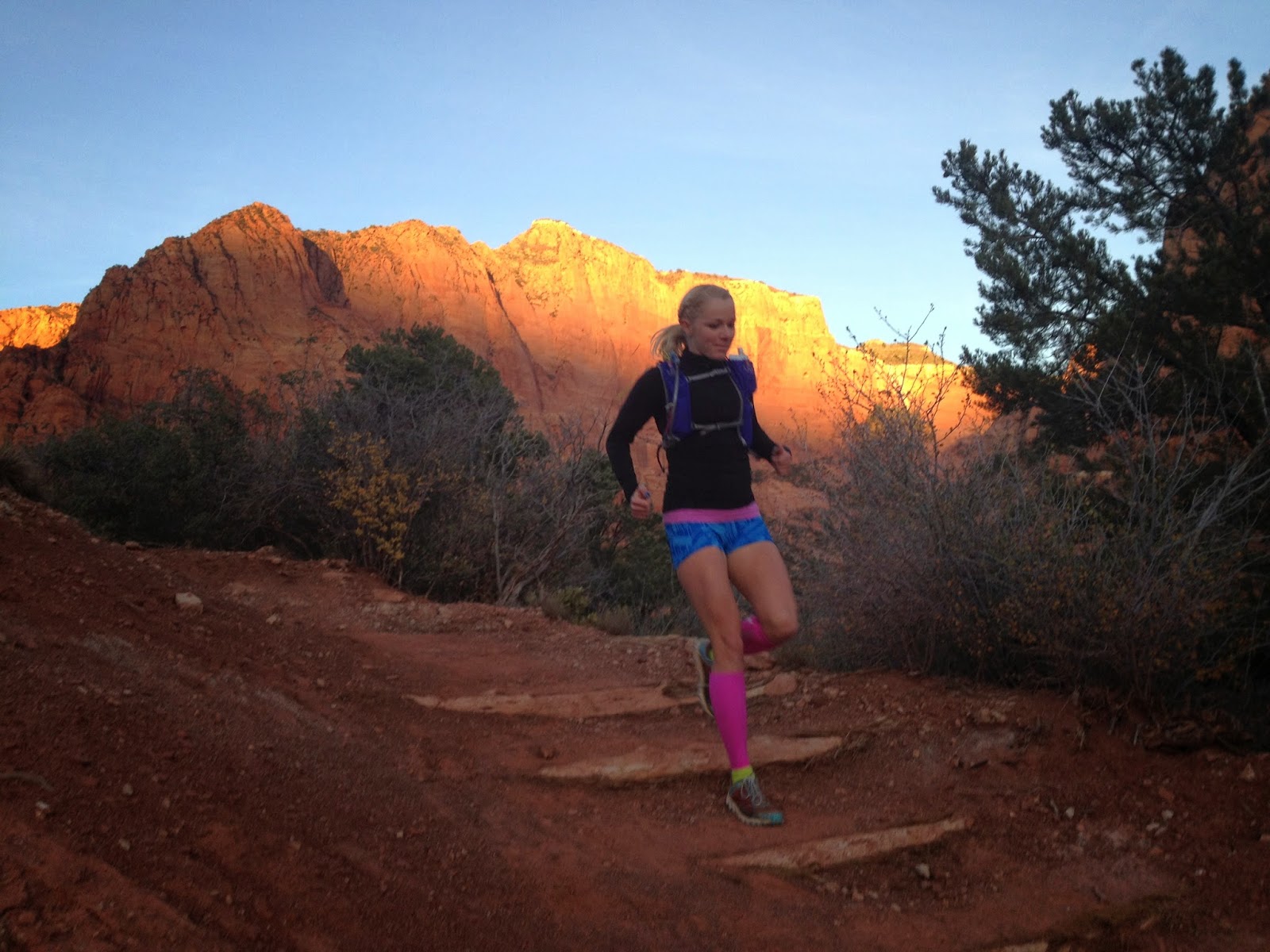 My goal for this attempt was nothing more than to have a great experience running through Zion National Park with my friends. I didn’t care about speed, an FKT, or any notoriety. All I wanted was “the perfect day”.

We started our run at 5pm on Friday, November 7th. Our plan was to do the first crossing under the light of a full moon, then return early the next morning with two friends in tow to spend a beautiful Fall day in the park together. Running so early in the evening came easy, effortless. We cruised down into Laverkin Creek as the sun and light faded behind the cliffs to our southwest. Hikers and backpackers stared at us in awe as we cruised by in tiny shorts and even smaller hydration packs. You could see in their eyes that they couldn’t comprehend the enormity of what we were doing, starting so late in the day. And then darkness.

As we ran into the night we were greeted by the rising moon. Like an old guard keeping vigil as we ran we pressed on into the abyss. The backcountry of Zion, normally an envelope of black became a painted canvas of every shade of gray. We frequently stopped to appreciate the spectacle, even stopping once in Telephone Canyon to sit and give thanks for that moment, for that site, the one that could never be duplicated through the lens of a camera. Crew stops at miles 13 and 35 were more like reunions than race pit-stops. We stayed to chat, eat, and most importantly, laugh. Matt, Jen, Josh, and Derrick, always so positive, made sure we stayed and left with everything we needed. Their contribution to our journey is incalculable. 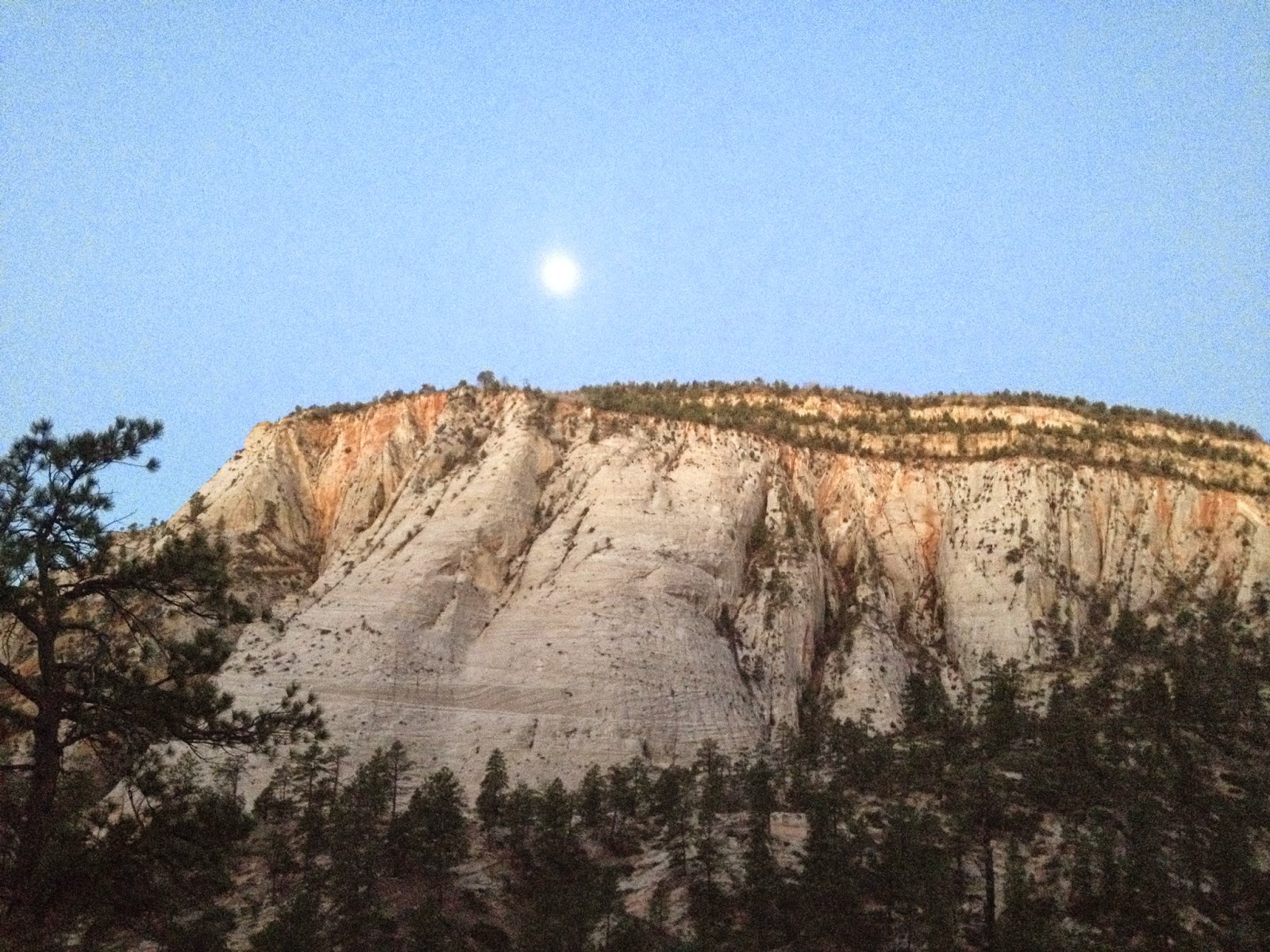 We completed our first crossing in a little over 11 hours, something like 11:14 (I haven’t uploaded my GPS data yet). After a relaxing and lengthy stop we set off for our second crossing, this time with Josh and Jen in tow. Josh was there the first time we ever tried the traverse back in 2011. We dubbed that one the Zion Trainwreck because we got caught in a rain and snowstorm, with an overwhelming amount of mud, and had to turn back. Josh had unfinished business. Jen completed the traverse for the first time earlier this year in an uninspiring time. Both of them, like us, had a goal of enjoying the park and the company and nothing more. While we left under the illumination of our headlamps, it was only little more than an hour later that we had them turned off and running under the glow of a rising sun. 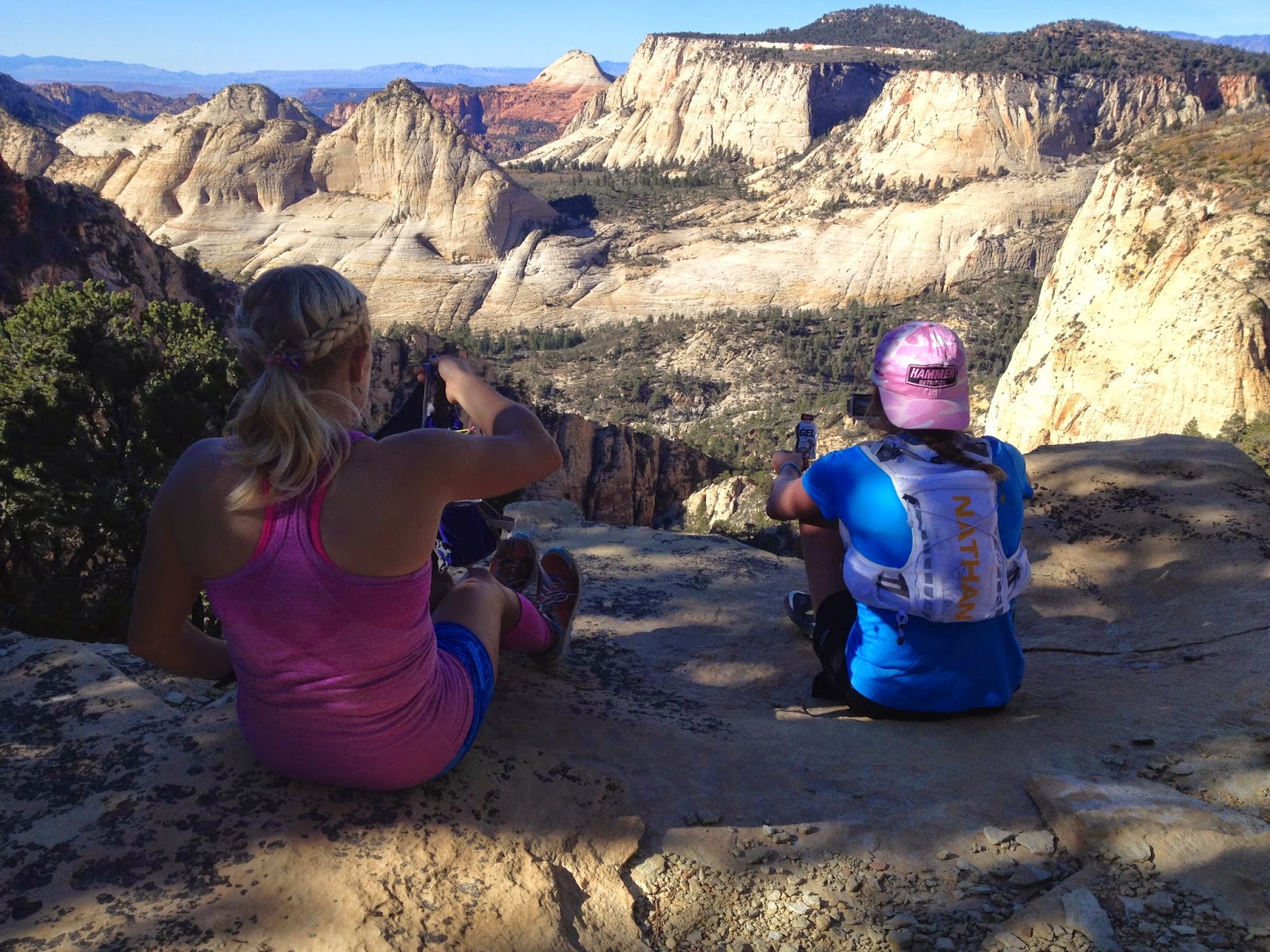 When we dropped into Echo Canyon the alpenglow lit up the topmost spires of the highest points in the park like a torch on fire. We snapped picture after picture trying to capture the moment, only to look back with disappointment at what simply couldn’t be duplicated as well as what we saw with our eyes. Instead, we stood inspired, mesmerized, and thankful. Now, 60 miles or more into our run and we were being rejuvenated with the heating rays of the sun.

Up to this point I had yet to go through any type of low point. My energy was always high, my spirits high, and my attitude positive. My stomach never got upset and I never went through a true “bonk”. Only twice did my energy taper as I got slightly behind on calories. Each time I pumped myself full of calories and I was back and flying. Jennilyn had a goal not to throw up for the first time in a 100 mile run and was doing great. While she battled an upset stomach a couple of times, for the most part she felt great and moved with methodical strength. She is truly an inspiration.

By the time we got to Potato Hollow, mile 73 (mile 27ish for Josh and Jen), everyone had settled into a groove and were feeling the distance and vert. I took it upon myself to play a little joke on them, so I ran ahead, sat down on a log, and started crying. When they approached they could tell something was wrong. Jennilyn put her arm around me while Jen tried to encourage me to get up and get moving, both without success. At the right moment I dropped the charade and laughed. They were good sports, gave me the hassle I deserved and we were off again. Within an hour we were running along the West Rim trail towards Lava Point when Jen went down, falling over a bush and off the trail. As I approached she sat holding her knee and wincing in pain. I felt bad for playing a joke on her as I tried to help her up. She was unable to weight her leg and the outcome of our run was now at risk. When I asked if she might be ok after a few minutes she said “Yep” and took off bounding with laughter down the trail. Retribution had been granted. 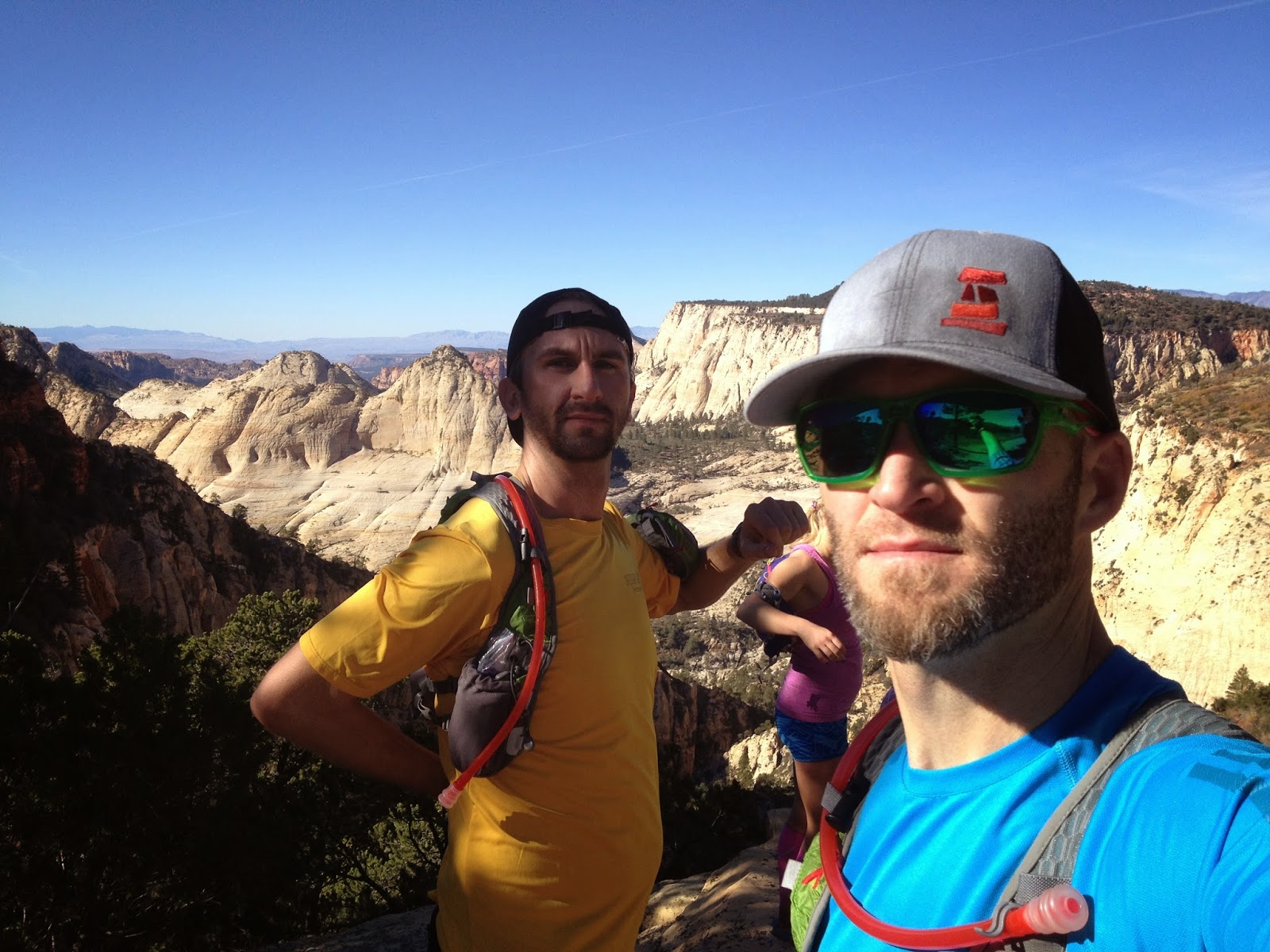 Our fourth and final crew stop came at Hopp Valley with only 13 miles left. We picked up another friend, Becky, to run the final miles with us. She was a quick reminder of how tired we were as she kept running ahead and turning around to wait, uncertain as to why we couldn’t keep up. The sand, water, and miles of Hopp Valley were weighing on us, but we were closing in on the certainty that we could complete our trip in under 25 hours. As we dropped into Laverkin Creek the sun was setting once again. Like the night before, in the same place, we ran below the splendor and majesty of a place so aptly named, Zion. 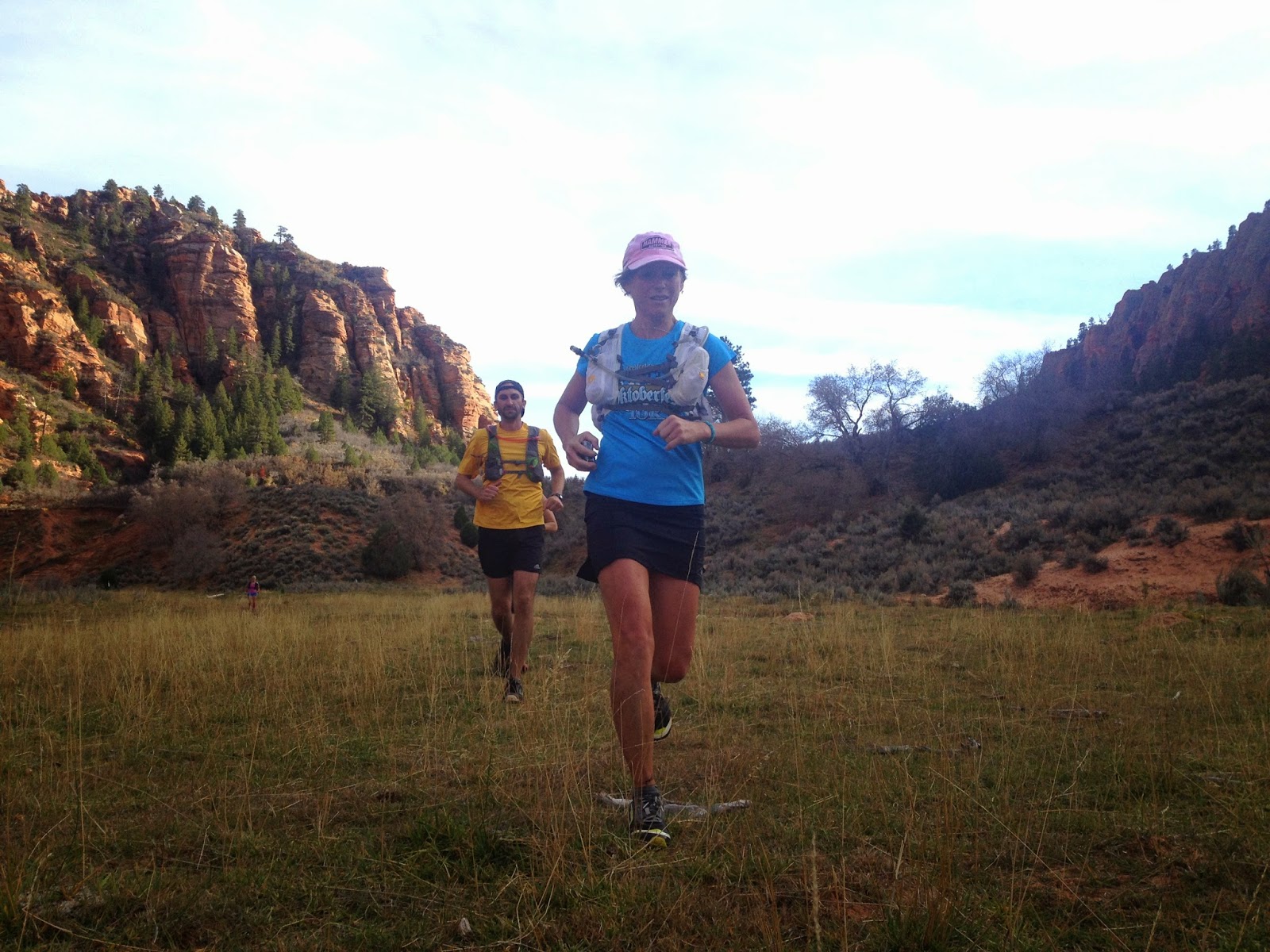 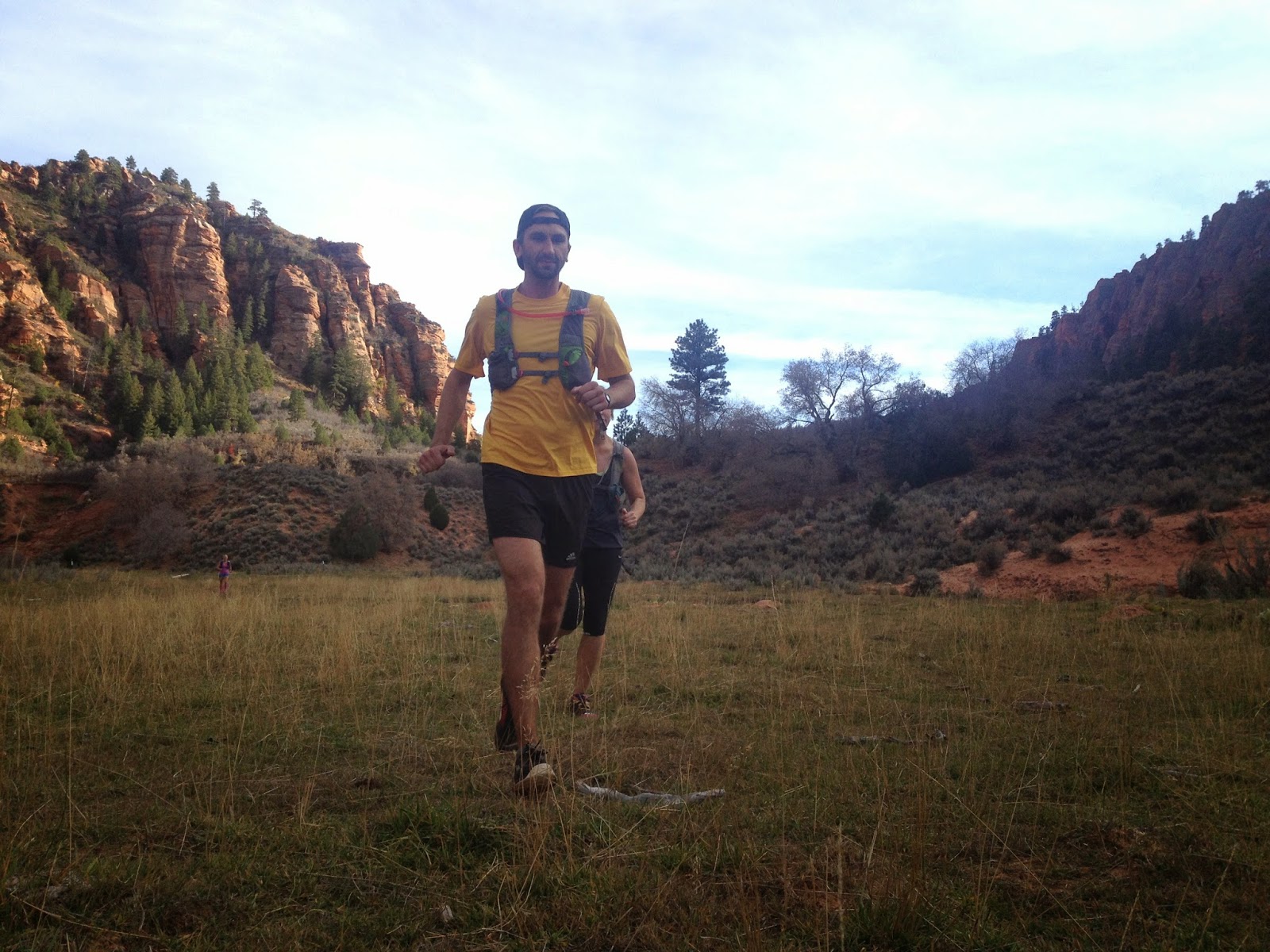 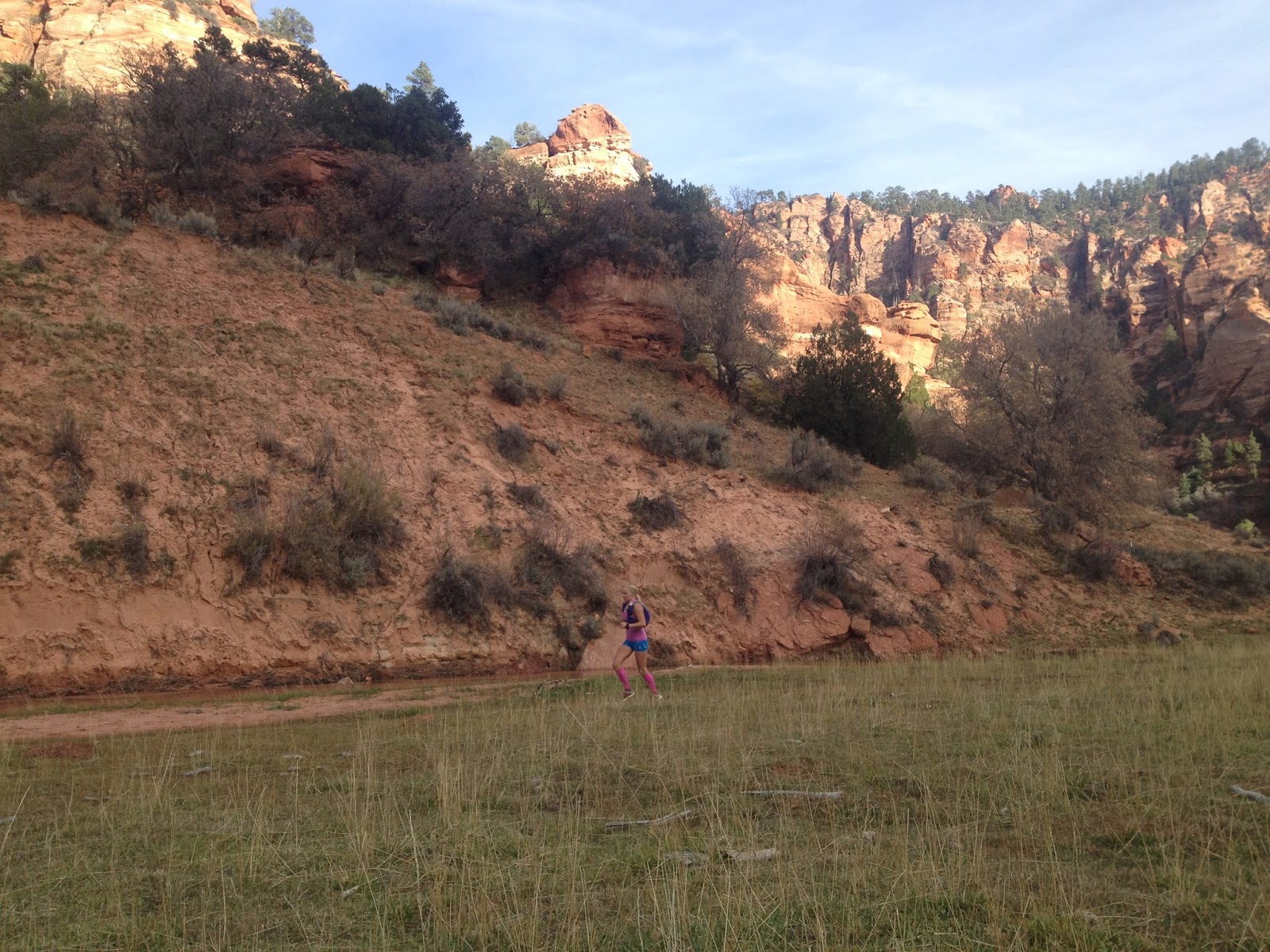 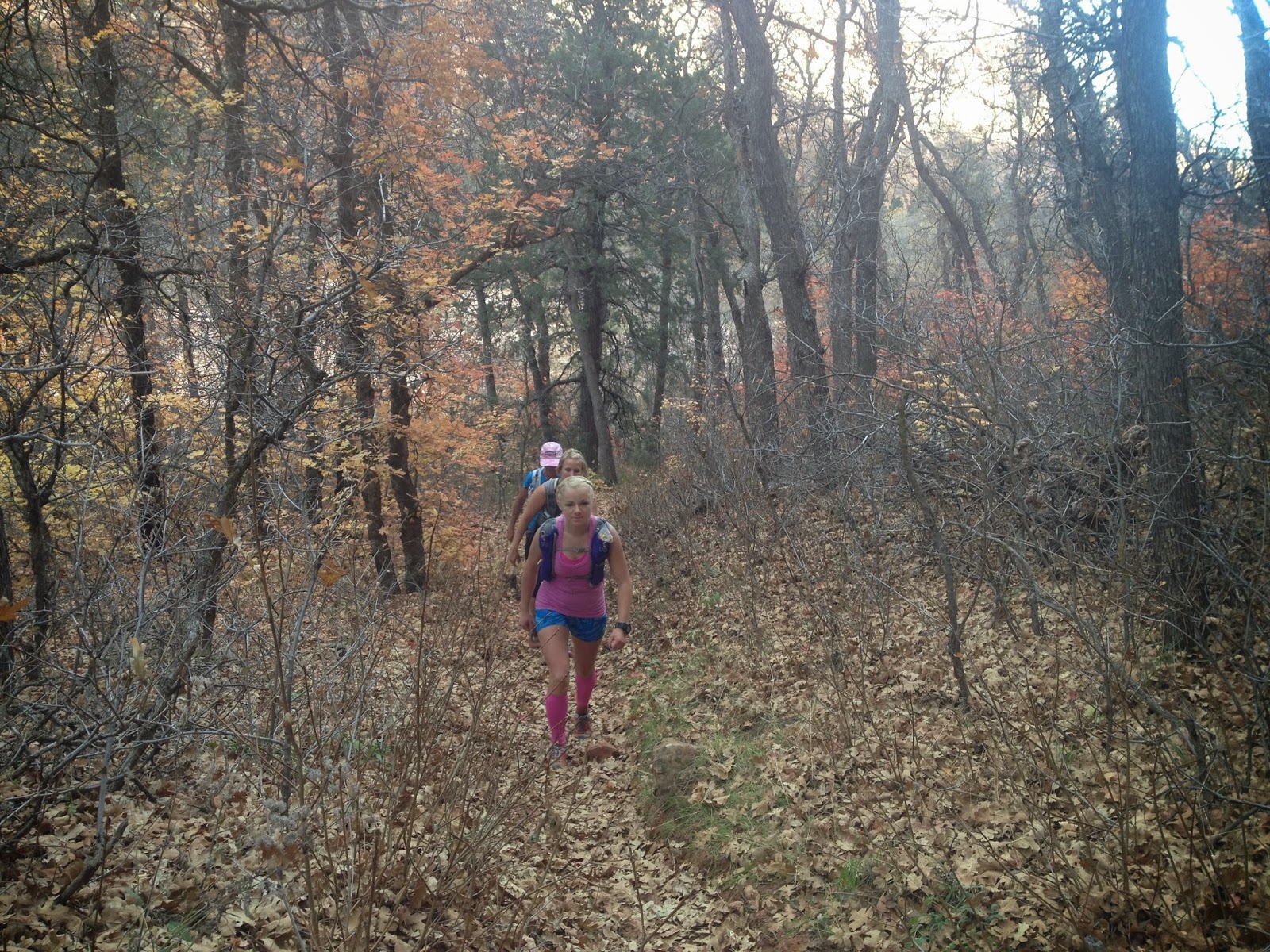 With four miles left we turned west to climb up to Lee Pass. I couldn’t run anything uphill at this point, but Jennilyn could and pulled ahead. I came up with reasons for why I couldn’t keep up and settled into my first true low in attitude. A mile later, now on the home stretch, I got tired of my own excuses and took off, leaving everyone behind me. I was running the final miles at or below an 8 minute mile. I could have easily run into the finish by myself, beating Jennilyn by a couple of minutes, but that’s not why I was there. I didn’t care about my time or an FKT, I came to start and finish with my friend, so I waited atop the final climb for her. We ran in the last quarter mile together, as it should be, before darkness had finally settled in. There, waiting for us, were friends and family. We had done it, completing the Zion Double crossing in 24:50, over a 2 hour improvement on the previous Fastest Known Time.

More important than any formal time was the experience I had with Jennilyn, Josh, Jen, and Matt. I had the perfect running day, my best feeling 100 ever, with some of my closest friends. There are moments I didn’t share and won’t because they are sacred to me. There were visions that can’t be duplicated, pictures that were impossible to take but will always remain in my mind. And finally the words, the laughter, and companionship of my friends. I thank them for simply being themselves and allowing me to share that experience with them. I’m a better person, not because I ran 100 miles, but because I spent time with them. And I will be forever grateful. 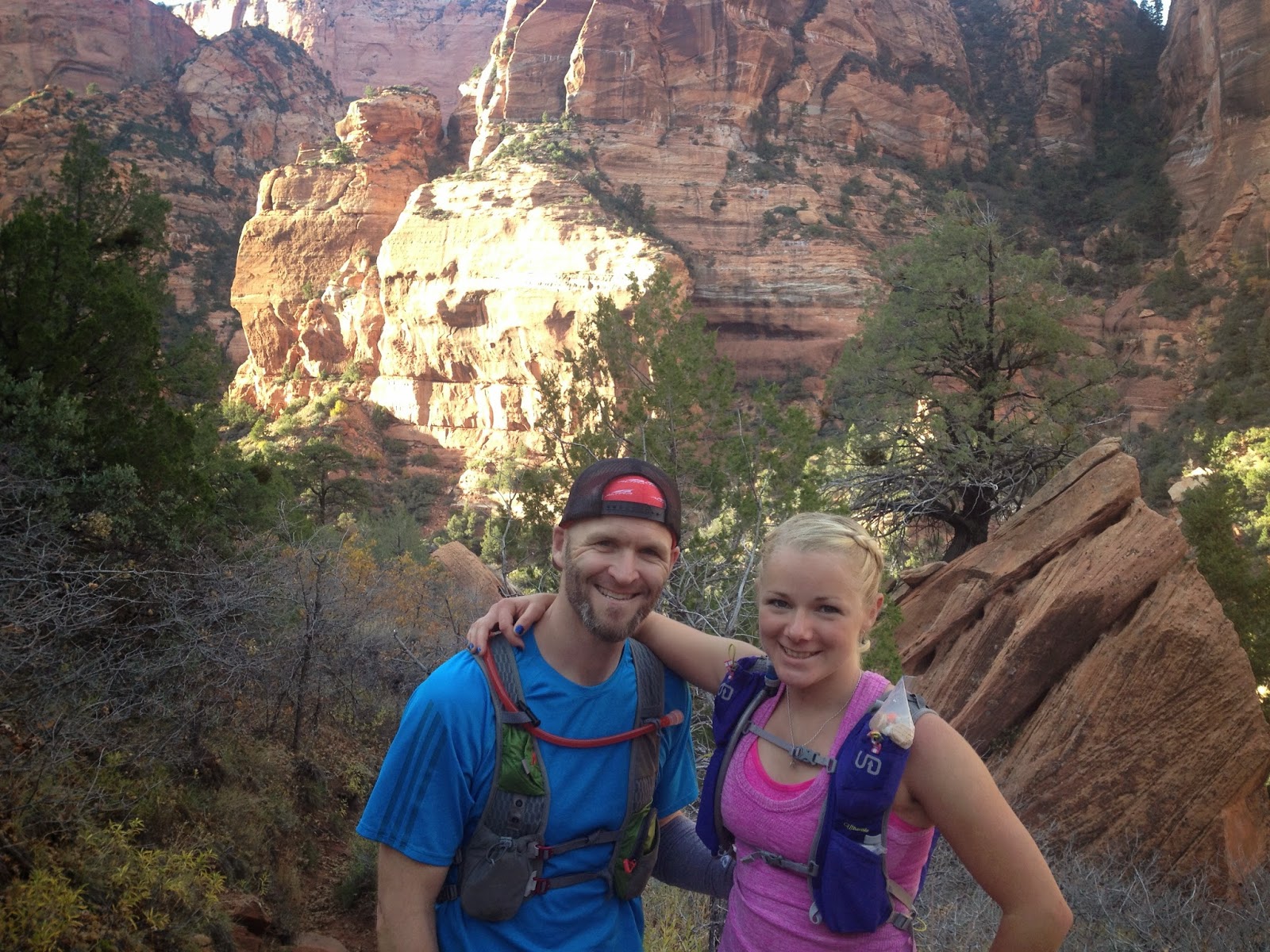 I would be remiss if I didn’t thank my sponsors who’s products allow me to achieve my goals. Without them I wouldn’t have accomplished what I’ve wanted to.