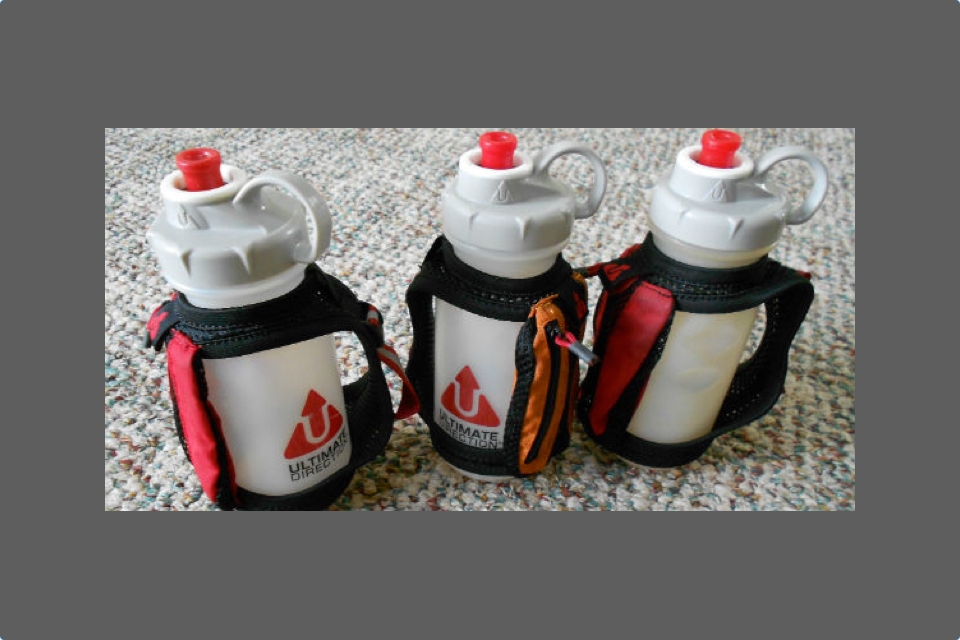 I used to be a die-hard hydration packer, now completely converted to a handheld bottle holder.   For hydration packs, I have used the Nathan and a few different models of UltrAspire.   I now use either Nathan or Ultimate Direction handhelds, combined with UltrAspire products.

While hydration options are a matter of personal preference, here are the reasons that personally convinced me to make a switch, and never look back:

While a hydration pack will only hold one type of fluid at a time, I love having the choice between two drinks.   I never have the same drink in both of my bottles.  I vary between:

The two-fluid option is a flexibility I’ve really enjoyed.   I usually keep water in one bottle, so if the mix in the second bottle is too concentrated, I can always dilute it.   This is super helpful in races where I’ve filled up at an aid station and the mix isn’t quite right.

At my last race, I asked for half Coke, half ice in one of my bottles.   I was a mile down the road when I realized that they had only given me half Coke.   The Coke taste was too sweet for me, so I diluted it with water from the second handheld.   Problem solved.

If I know the mileage to the next water stop, I can monitor exactly how much water I should drink, or how much I need to conserve so I don’t run dry unexpectedly.   It also helps any race aid station volunteers gauge whether or not I’m drinking enough.   Because hydration is such a key aspect to running success, this is a huge benefit for me.

At the Cuyamaca 100K I crossed the last aid station in a daze.   A volunteer grabbed my bottles and asked me if I had been drinking, “Um… I think so…” I couldn’t really remember.   He took a look at my almost-full bottles, and immediately handed me more fluids.   I left that aid stations with a fresh drink and hot soup.   Enough to get me to the finish line.

Because I have significantly less room to over pack with handhelds, it has changed my mindset to a more minimal approach.   I take only what I will absolutely need and this has really helped de-clutter my mind as well.   I’m not obsessing about what I may have forgotten to bring with me, and I’m not carrying unnecessary gear.

The first couple of times it’s a little scary because you’re carrying much less that what you may be used to in a pack.   But after a few runs, you realize that you need much less than what you previously thought.   It’s a freeing realization.

Some people teach their dogs to drink from a hydration pack straw, but mine doesn’t know how.   So when we’re on a trail and I’m not carrying a doggie dish, bottles allow me to stop and give my dog a drink quickly and easily.

One trick I use is to take a clean doggie poop bag (weighs nothing to carry), make it into a dish-shape, and pour water into it, holding the bag in place while she drinks.   I have also dug a small hole or indent in the ground, and placed the bag over that.   The water pools in the hole, held in place by the bag, and she drinks from there. I can then cover the hole back up and move on.

Handhelds reduce hand scrapes and wrist/arm injuries when you’re going down.   You can use them as a barrier between you and a rock when you’re reaching out to catch yourself.   They work essentially like gloves.   I have scrapes on my water bottles from a few falls or stumbles, but my hands have remained untouched.   By comparison, when I would fall with my hydration pack, my hands were the first things to get scrapped and bloodied.

On a hot day, a hydration pack would cause my back to sweat uncomfortably.   I would try to combat this by filling my pack with ice, and enjoying the cooling sensation on my back.   But this strategy would only last for a short time before the ice melted and I was sweating again.

Switching to handhelds drastically reduced this feeling of overheating.   There was more air circulation, and it was easier to stay cool.   I could also fill my handhelds with ice, and enjoy that cooling sensation on my hands.

If that weren’t enough, I could use a bottle to physically pour cool water on my head and neck from any stream.   I have filled up an empty bottle with cold stream water, and carried it with me to pour on my head when it got too hot.   Handhelds made a tremendous difference in temperature control.

Unless you have a perfectly fitting pack, you run the risk of chaffing.   And many of us know how tough it can be to find that perfect fit.   It’s easy to go through countless packs in search for one the works for us, and a lot of money can be wasted on packs that we can’t use.   Handhelds are much more universal, and there is no chaffing at all.

I’ve found that even if the pack itself doesn’t chaff, the sweating on my back and lack of air circulation through wearing the pack sometimes causes my sports bra to chaff against my back over long distances.   I figure the less chaffing potential, the better.

I’m a bit of a pack-rat when I’m wearing a hydration pack, and I weigh myself down with things I don’t need like extra food, water, or clothing.   The handhelds are significantly lighter and that weight difference is a big deal when you’re running long.   I feel more “free” in handhelds.   I feel lighter, and it’s feels easier to run and move around.

9. Keeps Your Form in Check

Running with handhelds is a great way to assess your running form and keep it in check.   The first time I ran in handhelds, I was surprised by how much my water was sloshing in the bottles.   I was waving my arms around too much, wasting energy.   I quickly learned to adjust my form and run in a way that didn’t slosh my bottles.

I kept my back straighter instead of hunched over, and kept my shoulders back.   I also learned to keep my arms loose and relaxed, instead of clenching my fists or gripping my bottles.   As I started getting tired, the sloshing of my bottles was a great way to make sure I was keeping good form, allowing me to exert less energy and run further.

If you’ve ever worked at a race station, you know that handhelds are much quicker and easier to fill up compared to packs.   If you add up the time it takes to remove your pack, check it for water, open it up, fill it, close it up again, adjust the bladder in your pack, and put your pack back on, the minutes add up significantly over several aid stations on a long trail race.

Not to mention that some packs and bladders are tricky to maneuver, so aid station workers need an extra minute to get them open or closed.   Often, my bottles are filled up and I’m out of an aid station while others who arrived at the same time are still fiddling with their packs.   I try to be in and out of aid stations as quick as possible, and I’ve seen first hand how every minute adds up.

In between aid stations, my handhelds also keep me moving because I know that if I take too long, I will run out of water.   If I have 6 to 9 miles to the next aid station and it’s a climb, I know that if I’m not running I have to hike fast to make sure I don’t run out of water.   When I had a pack, I was much more likely to dawdle or walk slowly.   Getting to the next water refill is a great motivation to keep you moving.   It also helps you focus on only getting to the next aid station, instead of thinking about the entire race distance and becoming overwhelmed.

The first couple of times I used handhelds, my arms and shoulders were sore the next day.   I have a weak upper body, but I’ve noticed that carrying handhelds has improved my arm strength over an extended period of running time.   It also brought my upper body weaknesses to my attention, and helped me address it.

Over time I’ve noticed that many runners near the front a race tend to be using handhelds, while runners in the back of the field tend to prefer packs.   I don’t have any stats on that and it’s just a personal observation, but I did start to wonder whether the elites were picking up on something I was missing with a hydration pack.   This inspired me to try handhelds.

I feel that with handhelds, I LOOK more like a runner instead of a hiker with a heavy pack.   This may sound completely shallow, but sometimes when you dress the part, you start to feel and perform the part as well.   It’s a little bit psychological.   When I think I look faster, I run more and perform better.

1. Running Out of Water

The first argument I always hear against handhelds is that they carry too little water.   For longer training runs where I don’t have the support of aid stations or water refills, I sometimes carry a bladder-less pack that will hold an extra bottle or two on my back. This is still much lighter and more minimal than a hydration pack, and very comfortable.

There are the three packs I have used that I would recommend for this purpose:

The Hydrapak E-Lite Vest  (I remove the bladder.)

Many pack users don’t like the feel of handhelds, and they do take some getting used to.   The first time you try handhelds, you’ll probably hate the feel.   The second time is not so bad, but still weird.   By the third and fourth times, I was comfortable with them.

Don’t let the transition deter you from giving handhelds a fair shot.   I would encourage any hydration packers to try handhelds for one week, and see how you feel.   Ultimately, stick with what works for you and keeps you drinking.

Vanessa’s original article is posted at her site VanessaRuns.

13 Responses to 12 Reasons Handhelds are Better than Hydration Packs