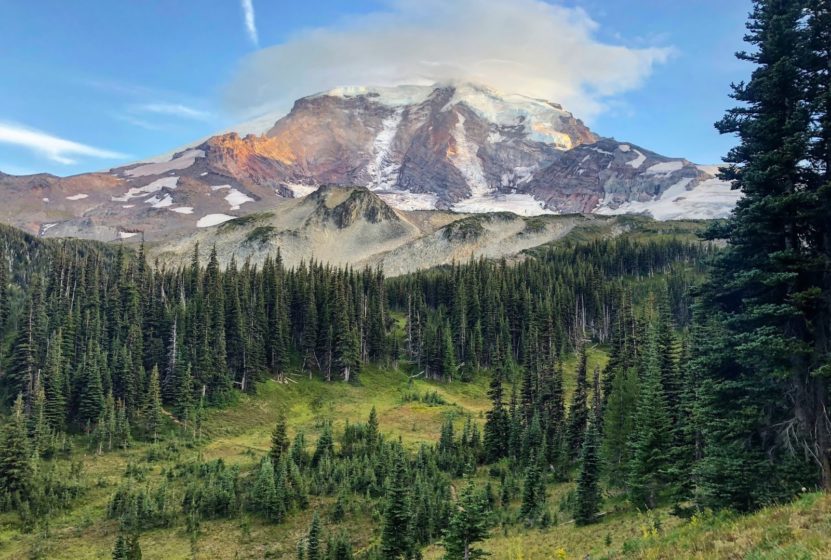 On August 30, Candice Burt completed the Wonderland trail in Mt. Rainier, Washington in record time – for the second time. 28 hours 45 minutes, 31 seconds later – after conquering her fears trekking the 95-miles with 25,000 feet of elevation gain – the 36-year-old mother of two removed her pack, got in her truck and drove back home.

It was the previous morning when Burt embarked on her record-setting efforts with much of the same setting as the start: alone in her truck, with no crew and no fanfare. Beginning at 10:20 a.m. at the Box Canyon Trailhead, she had two goals in mind: to beat the current FKT and to overcome fears that manifested themselves on her first record-setting run.

“When I ran and set the FKT in 2012, I was well aware that my time could be vastly improved on as I was lost several times and had some trouble with route finding,” Burt said in an email. “Whenever I feel that I have that much room for improvement, going back and setting a better time is always a possibility. Overall, going back was more about overcoming fears that I had than anything else. I wanted to be sure I could still do something like that solo, and in a time that I thought was respectable. 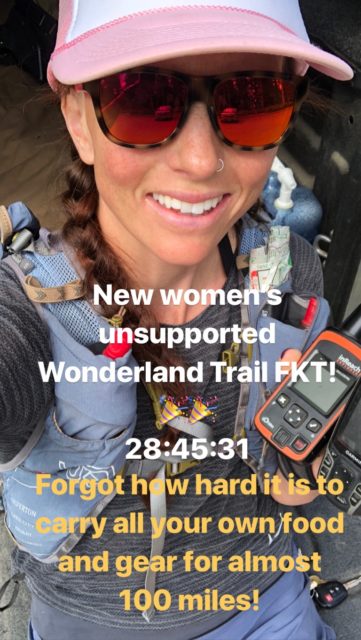 “When I ran the route solo in 2012 I had a several animal encounters, all in the same 4-hour window of time,” Burt continued. “I saw two bears and two mountain lions. It was all on the climb up from White River, at night. Having never encountered mountain lions and being alone with no way to defend myself, it was an extremely frightening and life-changing encounter that left me traumatized for years, afraid of running alone at night.”

With several miles and hours ahead of her before that fear would manifest itself, Burt, with her 22-pound pack in tow, started running toward her goal.

The first 10 miles climbed 5,000 feet and she was still keeping her goal pace of 3.5 miles per hour. Burt wrote in her blog about feeling great even with the steep hill climbs. She noticed, however, that some of the little things – like filtering – water was taking up time. And 10 hours into the run, she noticed that she might not have enough calories to complete the journey. 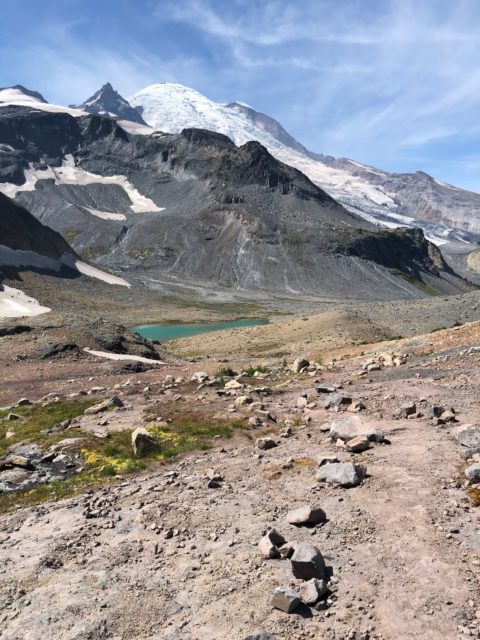 “I brought about 200 calories per hour for a 26-hour run,” she wrote in her blog.” There wasn’t much past that. Shit. I need to start conserving and I was only 10 hours into the run. There was no other option though, it was to conserve, or run out completely. I would make it work. It was all just part of the ever-changing challenge. Go with it. Go. GO GO!”

And go with it, she did, picking wild berries along the way to supplement calories. The ability to eat off the land energized her, and she began to pick up speed.

“Living off the land while running my FKT only added to the epicness of the experience. At the time it was concerning that I might run out of calories, but since there was nothing I could do about it, I just looked for solutions, rather than worrying about it. When you are solution oriented, problems lose all power.”

That power mentality would need to serve her well in the coming hours as night was quickly approaching. She would need to face her greatest fear that had plagued her for years. As the darkness consumed the earth, Burt said that she wasn’t afraid. She turned on two of her headlamps, and for nine straight hours while listening to episodes of Radiolab out of her phone’s speaker in an attempt to scare off wildlife and to feel some human connection. At the end of those nine hours, morning came, and the day renewed

“Having conquered that fear, I can say that I don’t have the fear any longer,” she said. “I feel at peace in a way that I haven’t felt while running alone. The only way I overcame the fear this time was by just doing it… putting myself in the situation with no way out except through it. By forcing the situation, I had to deal with it and it wasn’t nearly as scary as I had made it out to be in my head.”

With the night behind her, now was go time. She would need to run the last 30 miles faster per mile than she’d run the first 65 miles all while conserving calories during the warm daylight hours. It almost seemed impossible, and she worried about every little stop to eat, remove her jacket or even take in the views. Yet, she kept moving forward, and before she knew it, she was getting closer to Box Canyon.

Renewed energy fueled her, and she knew that she would not only make it, but the record was well in her reach. The miles began to tick away like clockwork, and when she was six miles out, she realized that she was on track to beat the record by 30 minutes.

Burt wrote about passing a hiker along the trail who told her she was going too fast to enjoy the views. She smiled and passed him, knowing full-well that experiencing the mountain at faster speeds was exactly how she wanted to experience it.

“…People who don’t run really don’t understand how much fun it is to enjoy the scenery quickly,” she wrote in her blog. “I get to see far more in a shorter period of time. It’s not better and it’s not worse than any other speed. It’s just the way I enjoy the mountain.”

The last few miles flew by, and before she knew it, she was back to her truck that was by this time in a crowded National Park parking lot — none of the cars or visitors there to see her finish. Still, she smiled knowing that she had done it. 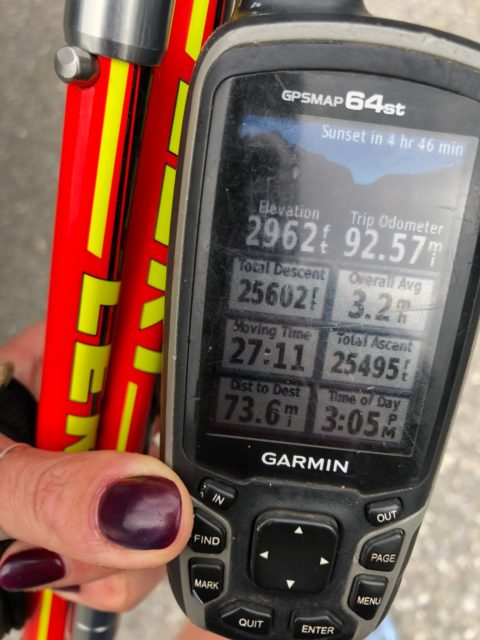 “It was the perfect finish really to the perfect 28 hours,” she said. “I went into this run for myself and for my own personal growth. Spending all that time alone with my own thoughts and in my own world coming back to my truck having had such an incredible experience was plenty! I think in many ways the end of the journey with no one having any inkling what an epic 28 hour that had been couldn’t have been a more perfect way to celebrate because in the end, we are all just traveling along this path we call life at different speeds and no one speed is really any more special than any other. I just happen to enjoy moving quickly through the trails and seeing what I can do, but that’s no better than the person who takes three days, just different.”

And if you think that after completing her epic adventure was full of rest and relaxation, think again. Burt is the race director of the Tahoe 200 that would take place just one week later. She would also embark on another 100-mile footrace, the Teanaway 100 on September 15, where she came in second place at just over 27 hours.

Needless to say, she has a knack for adventure, and won’t be slowing down anytime soon.