A Short Romp Through the Smokies: Nantahala Hilly Half Race Report

As this was my first event after a long, snowy and icy hiatus, I was beyond excited to be able to run again with other people, in an event that would have the requisite local brew AND, as I learned at the end, MARSHMALLOWS and PEANUT BUTTER! What other reasons do you need to run a trail race? Not many, dudes. Not many. 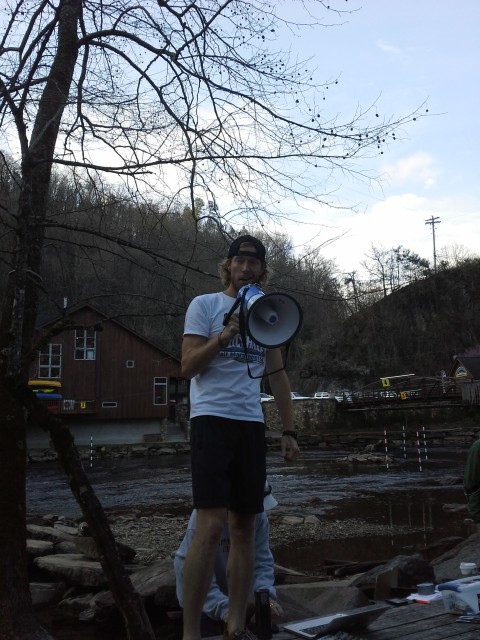 Sean Run Bum Blanton, the adventurous, young and hip race director, developed the course so that it would be challenging and full of “what [he wants] you to see.” I was nervous about this one, though. Any race that has “HILLY” in its title should be feared. I knew what I was getting into, but did I really KNOW? Nope.

Here’s a breakdown of the challenging but pretty awesome course along with some personal commentary (all mileage is approximate since my Runkeeper shut down pretty early on in the race):

Miles 1-2.5
This part of the course was fairly flat.
Because it is my preference to bring up the rear (wink, wink) I ended up running with two very funny, glamorously tutu-ed ladies, Kelly and Ariel, who were hilarious and were intent on bringing up the rear. I remember thinking (and perhaps I even said it out loud?) that that was actually my job. We ran along a dirt road that turned into a slightly muddy, and deeply dirty road that ran parallel to the Nantahala River. We passed a small but pretty waterfall about .2 miles in. If this is what the views were going to be like, I was sold. There was an option for half-marathoners to run through a dark, creepy tunnel with icy cold, calf-deep water, and then climb up a steep embankment (complete with rope and a really strong guy who PULLED. ME. UP. TO. THE. TOP) with soggy shoes—this was baptism for my new Altra Olympus. This was the first small hill. Portending future hills? Yep. 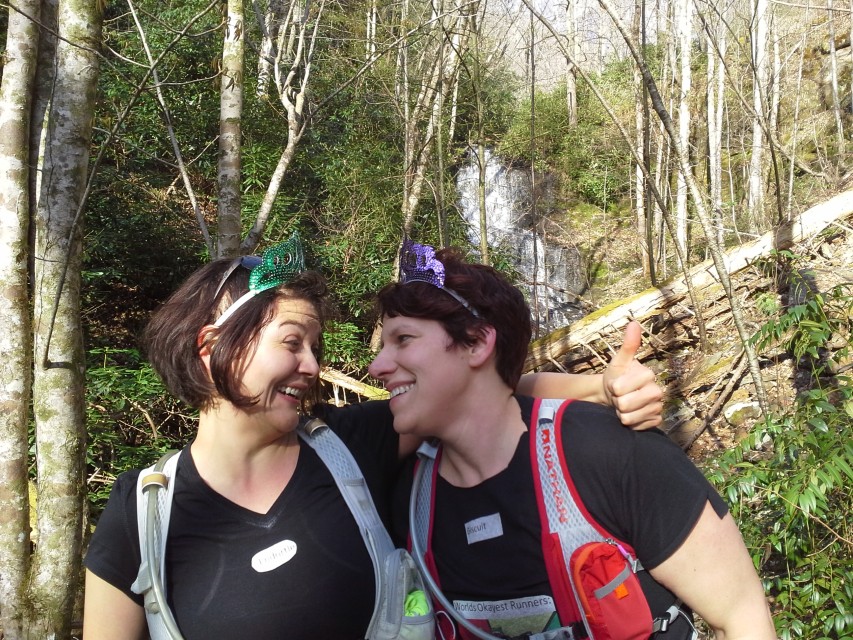 Miles 2.5-4
Here’s where the first real, non-negotiable hill was. “Oh this will be the steepest one in the whole race,” several people remarked as we rear-bringer-uppers came in from the first 2.5 out and back on the fairly flat dirt road. That was comforting—for about a minute or so until we reached the part of that hill that decided to turn into switchbacks that lasted for about 3 years.

I ran and hiked with my new friends for about .25 mile after the initial hill, and then they sped off into the wooded oblivion. But I could still hear their encouraging (and loud!) WOOT-WOOTs and general sparkly tutu-ed cheeriness from afar. That was comforting. 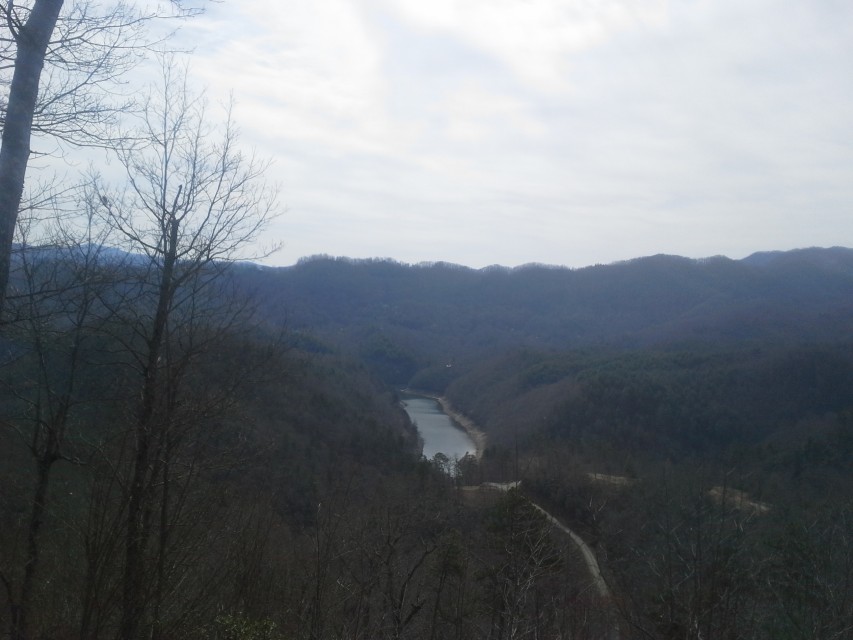 View from the Rockledge Property

Miles 5-6
At various points along the course, there were spectacular views of the Great Smoky Mountains, with their bluish hues and comfy blanket-like folds exuding a spirit of peaceful majesty and wisdom. Even though there were tough, long hills that never ended, you stopped in your tracks to appreciate miles and miles of earthly beauty. (Well I stopped in my tracks, anyway. I’m okay with stopping and taking trail-selfies. No shame. Maybe others continued to prance and skip their ways up those unforgiving hills. Nerds). There was an aid station at the end of this leg with very friendly guys. One of them chuckled and said after I’d had my fill piece of banana and candy, “Good job! But I’d be lying if I said it was all downhill from here.” Great. What the hell would that be? More hills? Oh right. This is the Nantahala Hilly As Hell Half. Ok. Now I remember.

Miles 6 to about 9.5
There was a very long uphill gravel road that in retrospect was pretty lonely, exposed and hot. This is one thing I love about doing tough events. You really hate yourself for signing up for something so hard, but at the same time you LOVE yourself for being so effin hardcore. Well maybe that’s hindsight…

Some people came bounding down heavily, clearly exhausted but happy that whatever lay beyond was over. Oh no. What would that be, I kept asking myself nervously. After the course left the NOC property, it entered Rockledge, whose owner had generously and graciously lent us his stunning vista of the Nantahala River framed by the mountains from a most excellent vantage point on his property. I believe most folks stopped and breathed in the incredibleness of the experience.

I love a nice, slightly sloping downhill. Doesn’t everyone? Makes you feel relatively fast, free, careless, and a little badass. HOWEVER, when that downhill becomes even steeper and seems to never end and then suddenly you see runners hiking in the opposite direction, you start to fill with dread. Like, serious dread. They looked miserable. I knew I was about to be even more miserable than they looked, and for the most part these people were fairly fit and trail-runner-lookin’.

My prediction was absolutely on point. The way I remember it, after I crested the hill with the gorgeous vista, I started the long downhill, which at first felt great—and until the quads started the process of being trashed. The hill became steeper and steeper until the turnaround where there was a good-humored guy handing out snacks from his truck at the bottom. I grabbed a banana piece (and then promptly dropped it from my sweaty hands, and proceeded to pick it up and eat it, dirt and all—you just don’t care anymore) and some M&Ms, turned around and looked up the hill. At this point, it’s just “step over step, step over step” like the old man in the old Chinese Folktale Rikki Tikki Tembo. Yes, that is what came to mind! 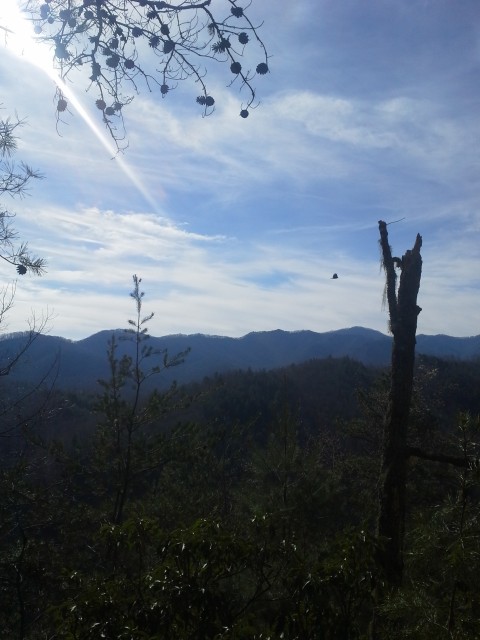 10ish to the finish
After a few more days on this uphill, it finally flattened out. The last few miles were relatively easy. I ran back into my tutu-ed friends for a bit, and passed them, fully expecting them to catch up to me and pass me, which they did. It was totally okay, as my only goal was to beat the cut-off. I had no idea how long I had been out on the course, but I didn’t care. I finished with lots of time to spare, sipped my excellent Highlands Brewery beer out of my finisher’s glass, noshed on marshmallows and peanut butter, chatted and exchanged numbers with my new friends and finally chilled out by the river before going home to chaperone prom (That, my friends, is fodder for another blog…)

Except for some missed turns (what is trail running without getting lost?), it was a well-planned and scenic run through the Smokies on a most perfect running-weather day.

This is definitely one to do next year! See www.runbumtours.com